On Saturday I decided I would try to turn my hand to the art of jam making. I presume this is something I will have to be a natural at seeing as the ability to make awesome jams and chutnies seems to run in the Morris family. There is quite simply nothing better than my nan Gwen's strawberry jam and Roy's citrus marmalades are not only mega tasty, they are usually wacky and unusual too. 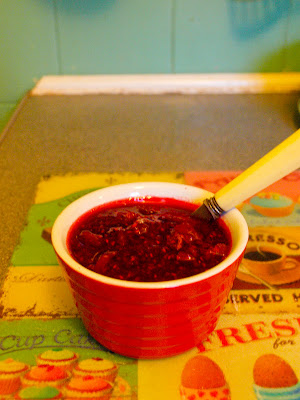 Why bother making my own when there are so many great local jam companies around, Christine's Cheshire Preserves, to name one?

Well, ever since our trip to The Tea Hive when we were served up scones with clotted cream and the most mind-blowing Bellini Jam, I haven't been able to stop thinking about it. So I thought there was only one thing for it - I had to try and recreate it myself. 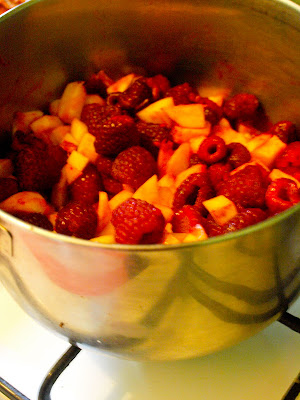 Another reason I was keen to make this jam was that there is a very important Clandestine Cake Club event coming up, it's an event that is actually going to be hosted by yours truly - A Spring Vintage Tea Party at a secret location in Chorlton. I will be making a Raspberry and White Chocolate Cake and want to put some pretty awesome jam in between my two sponges.

As I'd never made jam before, I had a little browse on Google to see what sorts of quantities I should be using for jam-making. I also didn't actually know what was in a Bellini so I had to look that up too. I came up with a recipe that only used four ingredients: raspberries, peaches, sparkling wine and special jam sugar. With four such yummy ingredients what could go wrong? 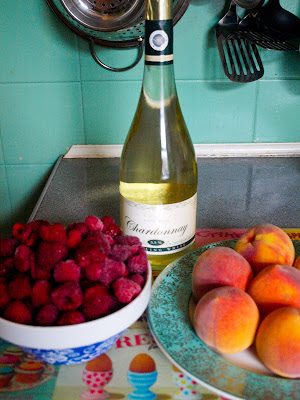 Making the jam was dead easy. Very similar to when I made Roy Morris' Plum Chutney at Christmas in fact. There's also something quite satisfying about making something that you know you're going to get so many servings out of.

The jam was gorgeous, especially delicious on some freshly baked bread we'd just whipped up from Country Wood Smoke's recipe, even though we were saving the bread was for that night so I could only try a wee crust. From what I remember the jam was also really quite similar to the one we had at Tea Hive - what a result. I will look forward to showing it off to some guests soon - anyone fancy coming over for afternoon tea? 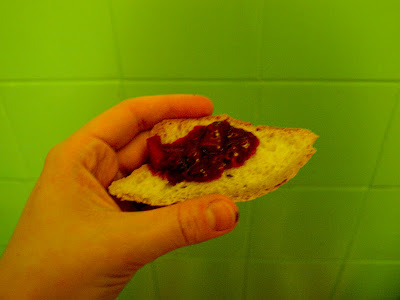 Start by peeling and stoning the peaches. Chop them up into small chunks. 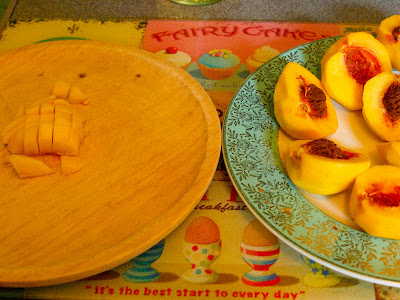 Place the chopped peaches, raspberries and sparkling wine into a large pan and bring to the boil. 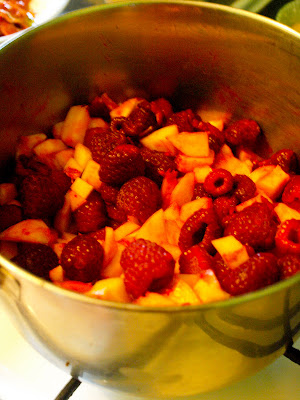 Reduce the heat and simmer for 20 minutes. Add the sugar and turn the heat up. Cook for another 20 minutes at this heat, stirring carefully - don't let the jam fly onto you when it's all bubbly! 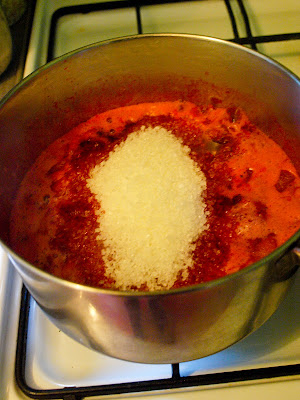 Turn the heat off and allow to cool for about 10 minutes, before transferring to jars. Cut little circles out of greaseproof paper for each of the jars you are going to put the jam in. Put on top of the jam and screw the lid shut while the jam is still warm. 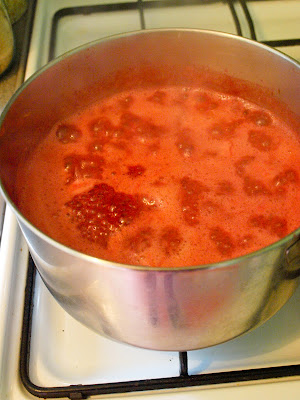 Allow to cool. Serve on crusty bread, or scones, or teacakes or on a cake... NOM!

Posted by Jules at 6:38 PM
Email ThisBlogThis!Share to TwitterShare to FacebookShare to Pinterest