Determined to break the pyjamas-and-sitting-around tradition that is the period between Christmas and New Year, Bailey and I planned ourselves a nice night out for the 30th of December. "Dinner and a movie" to be precise. The location for our meal? Bistro 1847 - a restaurant I had come across through the realms of Twitter. 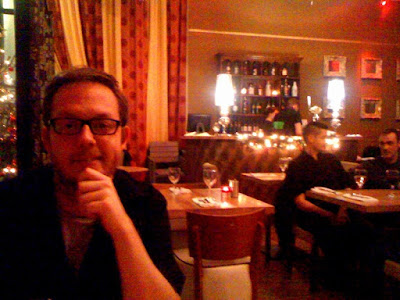 Bistro 1847, so-called to commemorate the year the Vegetarian Society was established in Altrincham, seemed to be the perfect restaurant for us - highly recommended by food-lovers around the city and with a fancy menu of veggie treats. We decided to go in early to take advantage of the Taster Menu - two courses and a drink for £15. A bargain!

There was a lovely relaxed atmosphere in the restaurant as we arrived and we were actually quite surprised at how many people were there at 6:30pm the day before New Year's Eve. One of the friendly, chatty waitresses told us we could choose where we felt like sitting which made a nice change so we got ourselves settled before putting our orders in for the Taster Menus and a nice glass of booze each. 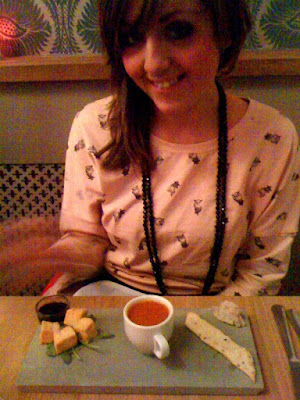 As part of our Taster Menu, Bailey and I were both presented with a little selection of 1847's starters. This comprised a teacup of the Soup of the Day (Tomato and Lentil for us), little cubes of Salt and Pepper Tofu with Soy Sauce and a little strip of Homemade Flatbread with a blob of Caramelised Onion, Rosemary and Bean Paté. It was beautifully presented and I couldn't wait to tuck in.

And what a yummy starter! The soup was delicious and we both commented that the texture of the soup was perfect as it wasn't too smooth. My only complaint was that I found some little stalks in mine. The tofu was great too - it was really crispy and when dipped in the soy nice and salty. Bailey was a little disgruntled to discover that two of his four bits of tofu were cold though! The Homemade Flatbread was my favourite - beautiful, soft bread and a gorgeous hit of rosemary to the smooth paté. A good start, particularly considering Bailey rated it when he doesn't even like tofu or lentils. 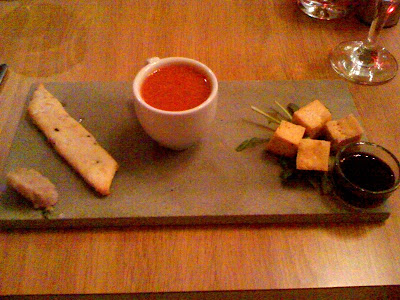 Our mains, which arrived after a breather of the perfect length also looked lovely. Bailey had gone for the Beer Battered Halloumi with Fat Chip Stack with a nice portion of peas and pickles.

I had actually been nosying at a couple on a nearby table and the bloke had actually ordered this main. I had witnessed the moment he first bit into his halloumi and had actually made such a big "crunch" sound that I had heard it from where I was sitting, so I knew Bailey was in for a treat. The halloumi was scrumptious and the batter light with wonderful flavours. Bailey thought the chips, although tasty were perhaps a bit too soft, but I thought this went well with the super crunchy halloumi batter. 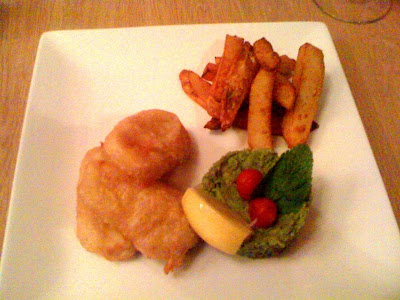 My main was the Cornish Yarg Soufflé with Sweet Potato Gratin. It was all nicely presented with a little pile of sprouts but I was a bit worried about the soufflé which looked like it had a little too much colour on it. However I tucked in and it was all great. The soufflé was light, cheesy and delicious and went really well with everything else on the plate. It was the gratin that really blew my socks off - just divine, really tender potatoes, a lovely creamy sauce with a gorgeous nutmeg flavour. A fab main - I have to say, a nice bit of everything together on the fork just tasted a-mazing! 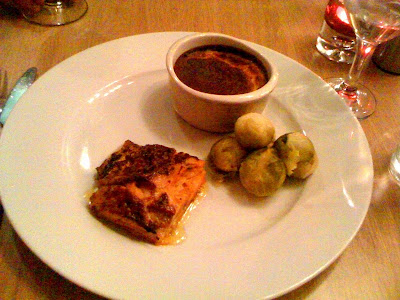 After such a great two courses, I'm afraid I had to give into a pud but really couldn't decide which one. I really wanted either the Affogato or the Marmalade Cake, but Bailey thought the Hendrick's Gin and Tonic Cake with Cucumber and Black Pepper Granita sounded fascinating, yet I didn't really fancy it.

I decided I would request the expertise of the lovely waitress, who had been chatty and approachable throughout the meal. She said without hesitation that the G&T Cake was really nice and that it was the "signature dessert" of the restaurant, so G&T Cake it would be. 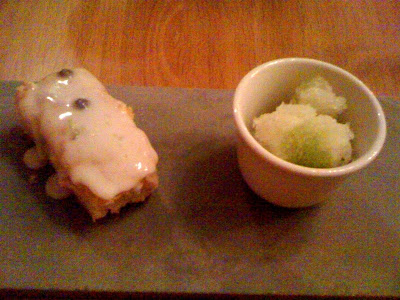 Well. It makes me a little bit sad to think that I nearly did not experience the wonders of the Hendrick's G&T cake as I have to say it was the most exciting dessert I have ever had. As soon as it arrived I was hit right up my schnoz by the aroma of fresh cucumber coming from my pot of granita. How curious! 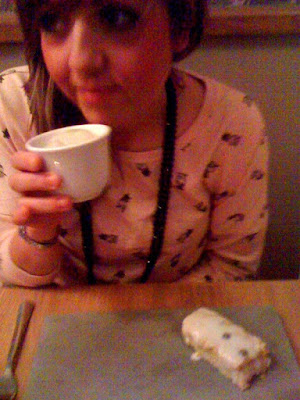 So I decided to have a little taste of the granita and yes, I was hit by the crisp coolness of a most cucumbery flavour. So next I got my spoon and fork in there and got a nice bit of the cake and the granita in my mouth together and... WOW! Taste sensation, party in my mouth with everyone invited! Bailey found it quite hilarious to see the expression on my face. I cannot really describe the intense zinging my taste buds were experiencing but it made me think of when Greg Wallace goes wild after eating incredible desserts on Masterchef. The waitress asked me what I thought of her recommendation and I honestly told her: "Amazing... one of the most exciting things I've ever eaten!"

So, what can you say about such a fab meal - I cannot recommend Bistro 1847 enough. The food was almost faultless and the dessert mind-blowing. There was a great atmosphere in the restaurant and it was plain to see why there were so many people in on what I'm sure is one of the quietest nights of the year. The service was perfect and the waitresses seemed to genuinely like their job and weren't pretentious or 'cool' at all as per what I've sadly come to expect from trendy veggie places. I would suggest all of you veggies and non-veggies too make 1847 one of the places you visit in 2012! 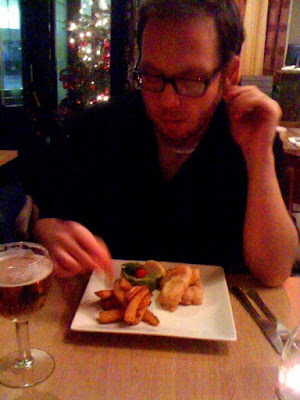 Posted by Jules at 4:59 PM
Email ThisBlogThis!Share to TwitterShare to FacebookShare to Pinterest