A homage to Eli's Pizza Express

When I was about 16 or 17 I used to make home made pizza all the time always using the pizza dough recipe from my family's classic edition of Delia Smith's Complete Cookery Course. I made all sorts of different pizzas, much to my mum's annoyance (as she loves keeping her kitchen clean) and I even routinely kept one of my best friend Liz's prescription bags of gluten-free flour in the house so I could make pizzas when she came over.

Now however, Bailey is the Pizza King in our house as he is awesome at making them and is an expert at using our pizza stone to make the bases really crisp and rustic.

But, yesterday was my big chance to get back into pizza making as Bailey's nephews were coming to stay and I was in charge of making our dough for the "make your own pizza" fun we had planned. 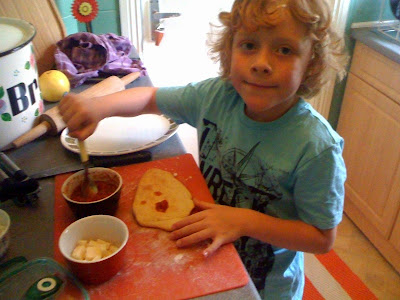 I have been after making pizza for ages as I really wanted to recreate a pizza we had in Bolivia's capital La Paz in a joint (that is the only word for it) called Eli's Pizza Express that sold pizza by the slice. In preparation I looked back at our Facebook photos from that trip trying to find a picture of the pizza we'd had. Unfortunately we hadn't taken a photo of the food but I did find a black and white snap Bailey had taken of me in there. 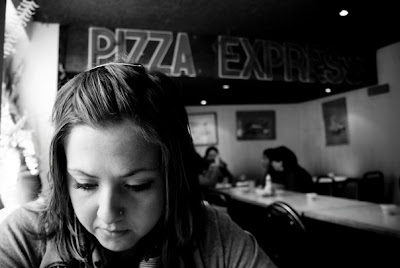 The caption I'd written was... "Me in Eli's Pizza Express after eating probably the best pizza of my life. It was pesto base instead of tomato but really nice pesto like the tallarin verde sauce from Peru. Then it had a really delicious sort of Swiss cheese on top - scrum." We both loved it so much that the next day we went back to Eli's and spent most of our day's food budget on getting our own full-size New York pesto pizza made especially.

So the other day when I made Tallarines Verdes I kept half of the pesto sauce back and we got our hands on some Swiss cheese.

I had lots of fun making the dough with Delia and never realised how funny the recipe is - it's such an old book that when it was written pizza was obviously still a new and exotic food as the intro says: "One of the very nicest ways of eating bread is as a 'pizza'..." followed by an explanation of what pizza actually is!

Anyway, the old school dough recipe worked as well as ever and the Eli's style pizzas turned out quite nice with the tasty tallarin sauce and Swiss cheese. 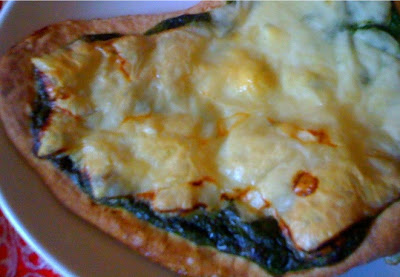 I think the boys enjoyed assembling their pizzas, even though there was a surprising distribution of toppings, e.g. very little cheese usage and decisions such as "I'm only going to put one piece of pineapple on mine". 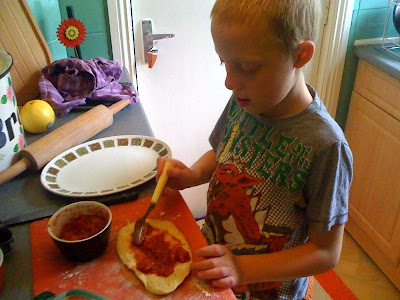 I think the only problem was we left our pizzas in the oven just a little too long and the bases were quite difficult to cut through. Also our pizza stone was a bit crowded what with having four mini pizzas on it, so if we'd had more space I'd have liked to have had a thinner base. 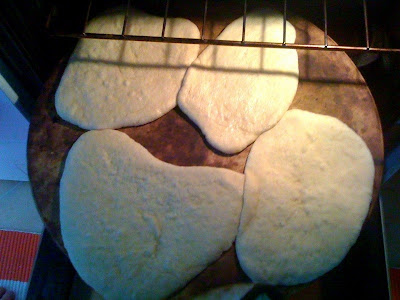 Next time I think we'll try making one massive pizza that fills our whole pizza stone. Mm, I'm excited about it already... Oh and look how my pizza was heart-shaped! 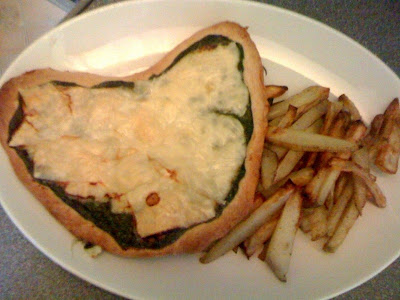 Prepare the dough at least a few hours in advance. Put the water in a jug and whisk in the yeast and sugar. Leave the mix in the jug for around 15 minutes, in which time a froth will form on top of the liquid. 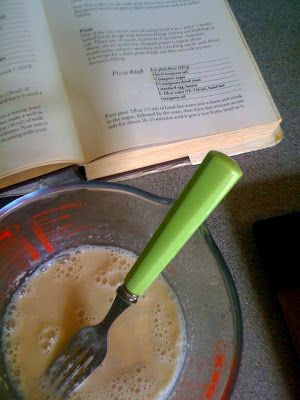 In the meantime, whisk the flour and salt into a large bowl. Beat the egg. Make a well in the centre of the flour and add the egg and whisk. Then add the water. 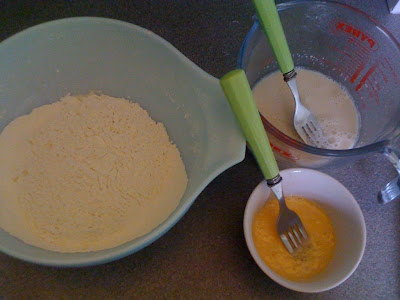 Mix the ingredients together using your hands until a nice firm dough has been formed. Use a little more water if necessary to make the dough less dry. 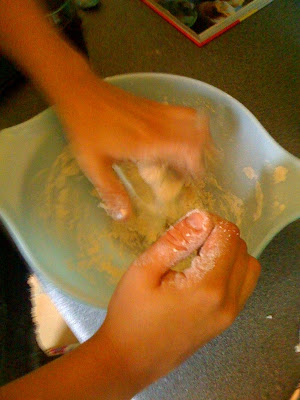 Knead the dough for a good few minutes before placing back in the bowl. 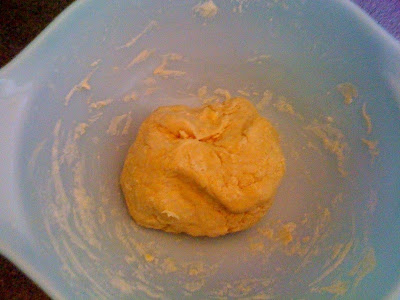 Cover the dough with a few drizzles of oil (I used cooking spray to save a few cals) and cover the bowl with cling film. Leave the cling filmed bowl somewhere warm for a few hours until you are ready to prepare the pizzas. 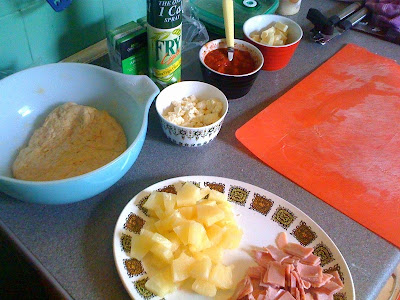 Preheat the oven to maximum temperature. If you have a pizza stone, put this in the oven to get really nice and hot. If you are making more than one pizza, divide the dough up. 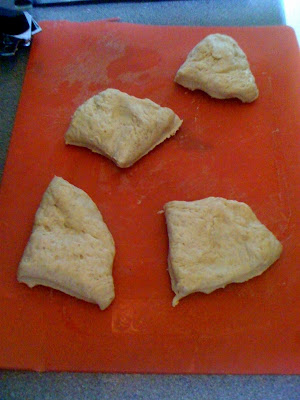 Roll the dough out on a floured surface. When the oven is heated up, put the rolled out bases into the oven for a couple of minutes to pre-bake for a little while, this will stop the bases going soggy and gives a nice rustic, Italian-style crispy base. After five minutes, take the bases out and turn down the oven to 200 degrees C. Add the pesto sauce or whatever sauce you are using to the bases. 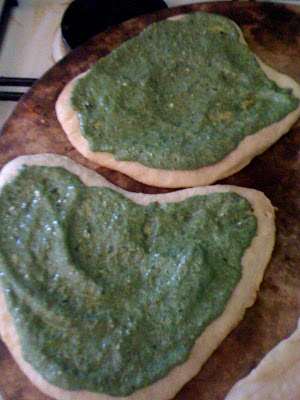 Top the pizzas with toppings of your choice and cheese. We kept ours simple with a few layers of sliced Swiss cheese. 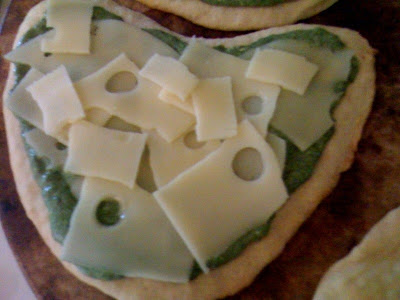 Put the pizzas back into the oven for 15 minutes or until the cheese is sufficiently melted. 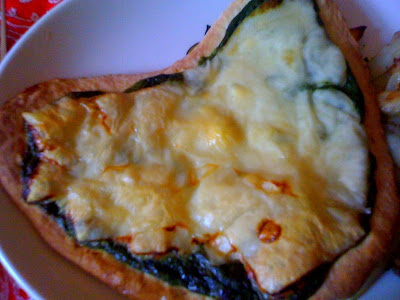 Posted by Jules at 10:19 PM
Email ThisBlogThis!Share to TwitterShare to FacebookShare to Pinterest