On Wednesday it was my last EVER day of school. OK so not really my last EVER. But it was my last day before the six-week holiday and the feeling of elation to have finished for the year (particularly as this was my first year) is such that you think it may as well be your last day EVER, and it is mixed with a sort of relieved "I surviiiiiiiived!!!!" feeling too.

To celebrate that and two colleagues leaving and another colleague's birthday, a lovely meal out in the Knutsford branch of Gusto had been lovingly organised by Sue.

Although those of us coming to Knutsford from Manchester had been a little bit naughty and had already had several drinks (including train champagne... nothing gets you as drunk as TRAIN CHAMPAGNE!) I was still sober enough to hold it together on our arrival at the very lovely and fancy restaurant.

Knutsford seems to me to be a very smart and chic place and I think Gusto has been decked out to fit right in with the atmosphere of the rest of the town: simple stylish décor with big windows, sleek black tables and twinkling fairy lights. Very nice indeed!

As usual I was sitting with my old mucker Hayley and also some of my other very lovely female colleagues - Helen, Sarah, Sue and Charlotte. 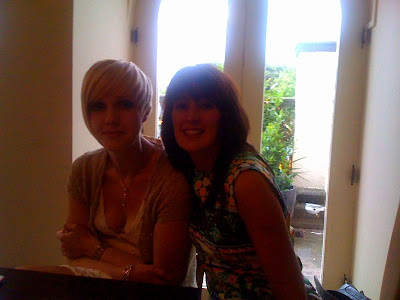 There were over 30 of us in total so we were all pretty rowdy. We had also ordered in advance and pre-paid for all our meals so it was really great not to have to worry about looking at the menu and ordering which would have no doubt taken absolutely ages.

I had decided to go for a starter of Baked Avocado with Baby Scallops served with rocket and tomato dressing. When it arrived it was the most gorgeous dish and I simply could not wait to tuck in. 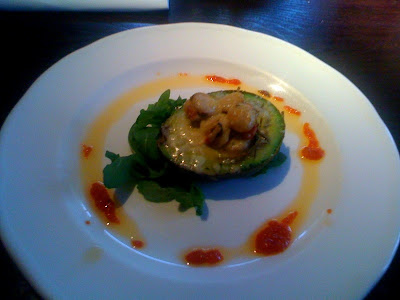 I had never had baby scallops and didn't even know that you could bake avocados so I didn't really know what to expect. But it was AMAZING!! It was actually one of the best things I think I have ever eaten. The baby scallops were so flavoursome and sort of popped in your mouth when you ate them and were such a great texture. I loved them, and they went great with the creamy baked avocado with that lovely simple tomato dressing. Sarah had the same and we both couldn't stop raving about it. TEN OUT OF TEN! 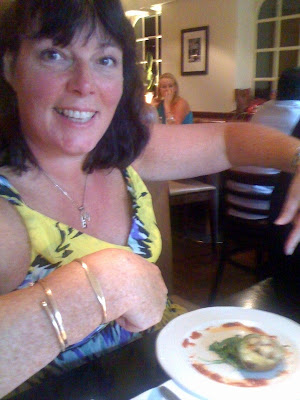 Like the time we went to Francs in Chester, Hayley was on the olives for starter again and they were really yummy too. 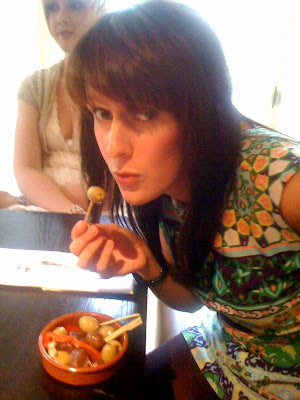 For my main I had decided to go for a fairly simple dish - my thinking behind this was that it would offset the richness of my starter and that also often the simplest things are the best. So I had chosen a really simple Spaghetti tossed in a light tomato and basil ragu. 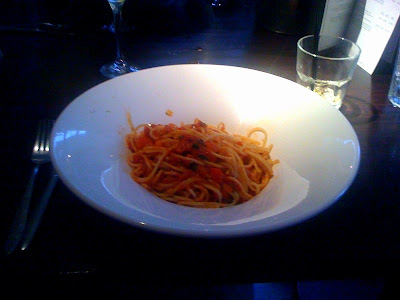 I think this nice bowl of pasta was exactly what I needed to sober me up a bit and set me up for the busy night of dancing I had ahead of me. It was very tasty, especially with a bit of freshly shaved parmesan on top, a bit of black pepper and the lovely little side salad I had ordered to go with it (which contained a giant onion - freaky!). 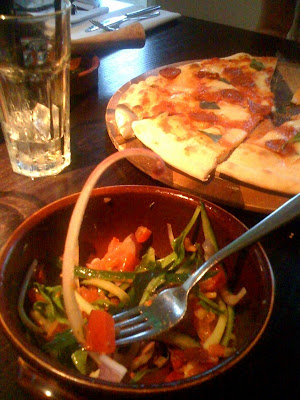 A few other people on my table had also ordered pasta and very much enjoyed theirs too. 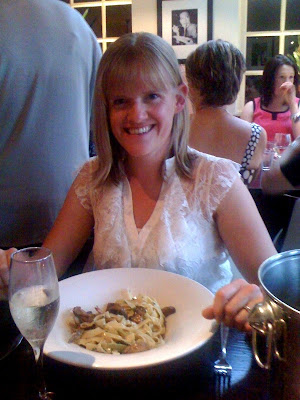 Hayley had gone for a massive pepperoni pizza which looked amazing and it was so big she couldn't eat it all - I think she eventually gave a couple of slices away to one of the very few males that were at the meal. 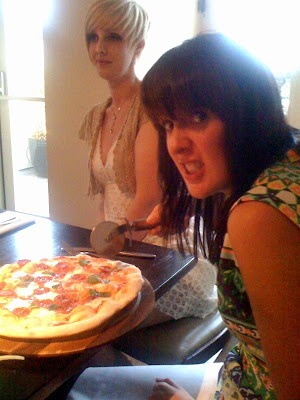 So taste-wise a delicious meal!

As for the service, I was totally expecting the usual confusion and delayed service that seems to happen every time you go out for a meal in a big group but actually, thanks also to Sue's excellent organisation, the service was excellent and the food flew out of the kitchen at an alarming speed. The only person who had to wait was Helen because they made a mistake with her order but they sorted this out very quickly. Our waiter was also excellent.

My only complaint would be that I assume the queue for the bar was fairly long as when Iain and then Tom told me they were off to get me a drink they were both gone for ages. More annoying for them really but maybe that was to be expected on a busy Friday night.

I would definitely make the trip to Knutsford to visit Gusto again as that is the second time we have been there as a school and both times it has been brilliant. I think I will also be taking Bailey to the East Didsbury branch so he can see what all the fuss is about although I had been put off going in there in the past, partly because I don't really like East Didsbury but also as it looks kind of pretentious. But anyway the Gusto we went to is a great modern Italian place and I would imagine that its fairly inexpensive in comparison with other places in Knutsford. An excellent place for a posh celebration!

Posted by Jules at 7:51 AM
Email ThisBlogThis!Share to TwitterShare to FacebookShare to Pinterest