After visiting the cinema to see a film I would rate in my bottom five of all time we thought we would stop for a bite to eat to cheer ourselves up. We decided on Gurkha Grill in Didsbury which had been heavily recommended by buddies. Getting there at just past six there were only a couple of quiet tables in. Even when we were leaving just before eight there was only one gobby table in and a few more parties coming in so the general feel of the place was tranquil.

The menu is fairly extensive so I ordered a couple of poppadoms for starters. Now Gurkha Grill's cuisine is Nepalese and although this generally means they serve Indian type fare they do have their own twist on things. Because of this the poppadoms were served with a pickle tray which consisted of a light yoghurt, a dry onion, pepper and coriander mix and the best dip was... I don't know what it was but it was lovely and it seemed to be a mango chutney which had been blended down to a honey like syrup. 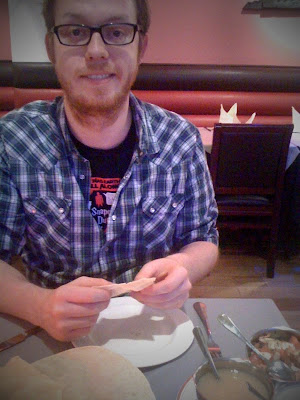 First trip up of the night was we ordered drinks and they didn't have and gas for the drinks dispenser so no pop for us. Instead we had tap water, that'll teach them. Jules ordered the Trisuli Macha (Whole trout marinated with yogurt and spices then cooked in a Tandoor oven) with rice and salad. I went for the Gurkhali Chicken (Chicken with a hot tomato sauce with onion, peppers, ginger, garlic and black pepper) with mushroom fried rice and a garlic naan bread. 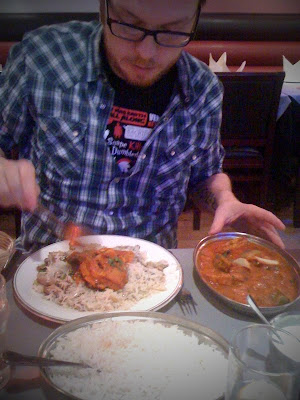 Mine arrived first but it didn't make half the entrance that Jules' did as it arrived on a 'sizzle' plate. Sizzling is an understatement though as the whole trout fizzed, popped, crackled and sputtered to the table causing an 'ooooh' to spread across the restaurant. By all accounts it tasted as nice as it sounded too with an amazingly moist flesh on the fish wrapped in the most crispy blackened skin I have ever seen on a fish. I can't see how it would be possible to replicate this type of cooking at home without the super intense hot tandoor ovens but I think we are going to try and emulate it as we have a sizzle plate of our own which has never been used. The tastiest part of the dish looked like it was hidden underneath the trout though, a stack of onions that had been fried in the oil from the fish. Not that the fish was oily, none of the food was oily compared to most curry houses I had visited in the past. Everything was that little bit lighter and you didn't feel greased up after you had handled the food. 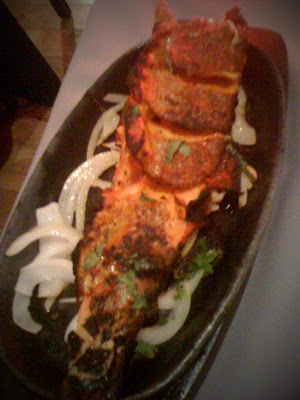 As soon as my curry arrived I felt a twinge of panic. The menu had listed it as 'very very hot, one of our hottest dishes' but I do like hot food and I wasn't sure how a hot Nepalese curry would compare to a hot classic style curry. As soon as the dish was sat in front of me I felt the sting of chilli in the back of my throat. Luckily the heat was within my edible range of spiciness and there was loads and loads of flavour to back it up. The naan bread was thin and light and was covered in sesame seeds, a real treat. My only complaint was that the mushrooms in my rice tasted like they had come out of a tin, they were pretty manky and I didn't bother eating them all. 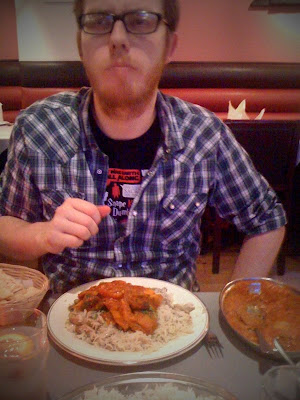 The service was also really good, really genuine care for making sure we were enjoying everything including the long forgotten art of the manager coming round to ask sincerely if you enjoyed your food. The only complaint on service would be that the waiters were overlapping so there were a couple of repeated checks, questions and offers, a minor quibble!

So with good service and with really tasty, slightly quirky indian style cuisine which isn't heavy or stodgy I would like to join the growing ranks of our buddies who reccommend this joint. Cracking. 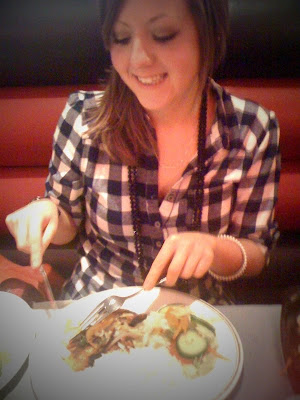 Posted by Bailey at 8:24 PM
Email ThisBlogThis!Share to TwitterShare to FacebookShare to Pinterest