The humble Spanish Omelette has a very important place in the history of the Morris family. 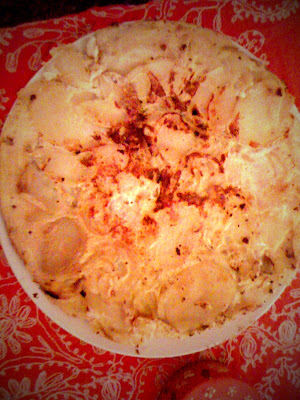 As Spanish teachers, I have memories going back as far as I can remember of my parents preparing massive 12-egg Spanish omelettes for their end of year post-exam celebrations with their students.

Also most parties held by my parents - particularly buffets - usually involved a large Spanish omelette of some sort.

I also have memories of Spanish people paying my dad compliments such as "This omelette could have been made by a Spaniard!"

This must have all rubbed off on me as I absolutely love omelettes and always make my omelettes Spanish-style, usually with veg like peppers rather than the traditional potatoes and onions. 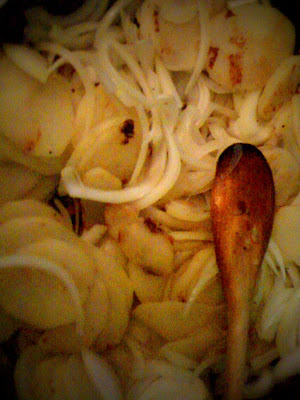 Having said that, I didn't make my first proper Tortilla de Patatas until my 22nd birthday when I was living in Barcelona and we were going to celebrate with a picnic in the Parc de la Ciutadella. This omelette was not a success and I remember my embarrassment while carrying my rubbish, broken, slightly warm omelette through the park on a plate while being met with disapproving looks from unimpressed Catalans.

Fortunately I have since had more luck with Spanish omelettes (even though I still only make the proper potato ones on special occasions!) - in fact on my second placement during my Teaching Practice I taught a class of 26 girls how to understand a Spanish omelette recipe before taking them into the Food Technology room where a total of 14 (some successful, some not so successful) Spanish omelettes were produced!

However... I do not wish to toot my own horn but a few people have asked me how I make my Spanish omelettes recently so thought I would share the love...

This is how I make my Spanish omelette and I hope that you will enjoy making it as much as I do!

Peel the potatoes. Cut the potatoes into super dooper thin slices - literally as thin as you can manage. Cook your potoes in a frying pan with cooking spray - I find that using cooking spray makes the potatoes go lovely and waxy which is really yummy and for this reason I always end up eating loads of the semi cooked waxy potatoes. Add some salt and pepper. 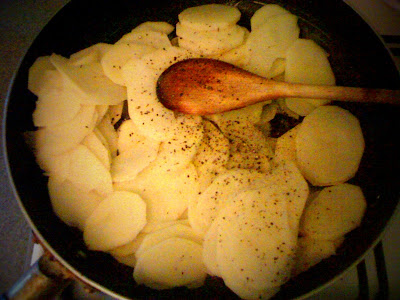 Meanwhile, slice the onion into thin slices. Once the potatoes are nice and browned and are sort of sticking to the bottom of the pan, add the onion to the pan and cook until softened. Add some more salt. I love salty Spanish omelettes! 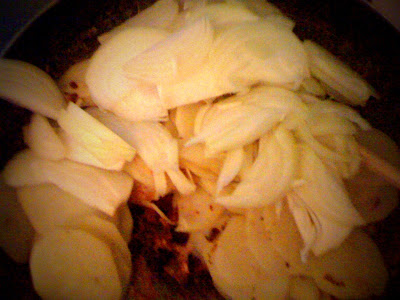 Meanwhile beat the eggs in a large bowl. Once the potatoes and onions are nicely softened, take the pan off the heat and allow to cool for just a wee while. Then, add your potatoes and onions to the beaten egg and mix well. Add a bit more salt for good measure. 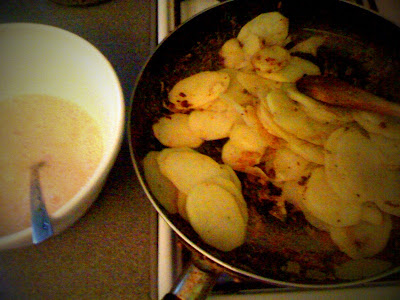 At this stage I like to wash my frying pan up just to make sure no nasty burnt bits are on the bottom of my omelette but I think a little scraping will do fine too. Allow the pan to heat up a little and then pour the eggy mixture into the frying pan. Jiggle your pan about, using a spoon if necessary to make sure all the ingredients are well spread out and nice and flat, but don't start messing about whisking it up in the pan like you would with a French omelette.

Allow to cook on a very low heat. 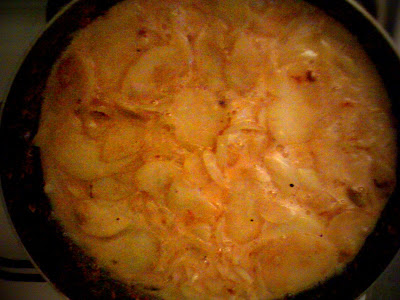 Now this is the fun / risky part. Roy Morris always finishes his under the grill at this stage but I think that makes him a big wuss. Sorry Dad, but if 26 fourteen-year-old girls can do this without dropping a single omelette we should do it too! There is no shame in asking for the help of a friend at this point either! Once you can see that the omelette is nearly cooked all the way through, take a large plate. Put your plate over the frying pan and put your entire hand on the plate to keep it secure. Flip the frying pan over until the omelette is on the plate. Then, slide the omelette back into the frying pan to cook the other side through. 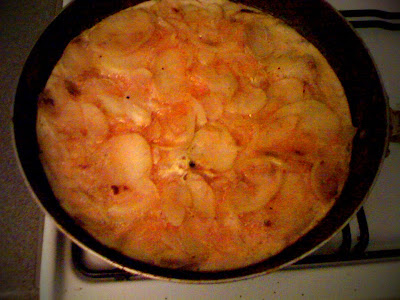 Serve the omelette whenever you want - it is yummy lukewarm, hot or cold.

It is also yummy when you take a piece of baguette, rub it with a tomato and then put a piece of omelette inside the tomatoey baguette - carbtastic, especially when served with patatas bravas! Mmm, makes me wish I was in Barcelona right now!!!!!

Posted by Jules at 8:52 AM
Email ThisBlogThis!Share to TwitterShare to FacebookShare to Pinterest