The other day I decided to make a mushroom burger for our tea as we had absolutely millions of mushrooms in our fridge and I fancied something really yummy. 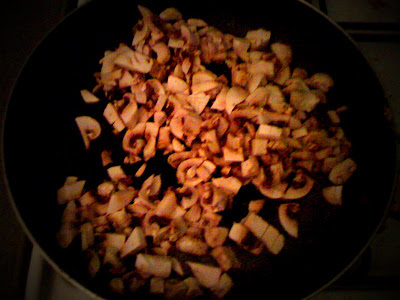 I cobbled together a few of the ingredients we had, and they literally took minutes to prepare and then I just bunged them in the oven and left them until the rest of the dinner was ready. So I was surprised when these mushroom burgers turned out so yummy and the weirdest thing was that they ended up tasting super meaty. In a good way. They were really lovely and dense and filling too.

Although the burgers were a little difficult to make into patties, once in the oven they were fine and went really crispy on the outside.

With cheese on top and in a wholemeal bun they were the perfect mid-week dinner for us. Of course I made our favourite parsnip chips to go with them which we hadn't had in ages.

Preheat the oven to 220 degrees C. Fry the mushrooms, encouraging them to go nice and juicy by sloshing a load of soy sauce into the pan with them. Leave for about five minutes until the mushrooms are softened and there is a fair bit of mushroomy soy liquid in the pan. Transfer the contents of the frying pan to a mixing bowl and slowly stir in the flour then the oats until you have a thick mixture. 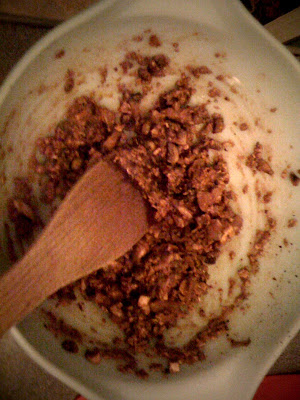 Take large tablespoons of the mixture and form them into patties in your hand. Don't worry if they are dead sticky. Put them onto a baking tray or dish and put them in the oven. 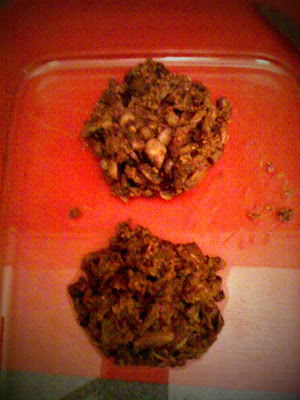 When you notice the mixture has dried out a bit and is becoming quite crispy, this is the time to add a load of yummy mature cheddar if you wish. Leave the cheddar to melt in the oven for a bit before getting them out. Put the burgers in a burger bun and serve with home made chips and salad. Delightful! 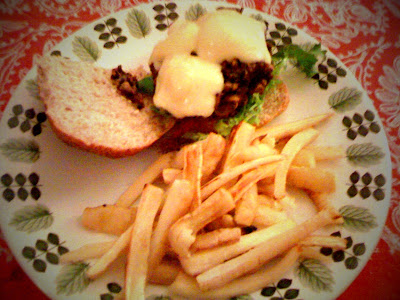 Posted by Jules at 8:47 PM
Email ThisBlogThis!Share to TwitterShare to FacebookShare to Pinterest