Well I'm honoured to be invited for a guest spot in Jules and Bailey's food blog!

After much talk of Black forest cherry cupcakes over Bailey's Birthday Weekend I became increasingly impatient and decided to give them a go myself... and i loved every minute of it!
I wanted to find some sort of kirch cherry type pie filling for the centre of the cupcakes but ASDA let me down, however i did find some very tasty black cherry conserve which turned out to be a perfect choice. 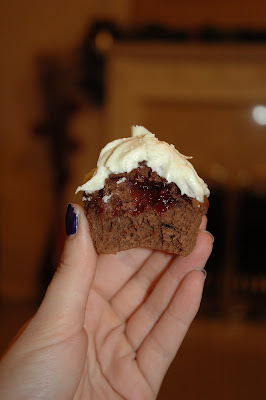 I decided to make the cupcakes chocolate like the traditional black forest gateau, and scooped a little spoonful of the black cherry jam in the centre. 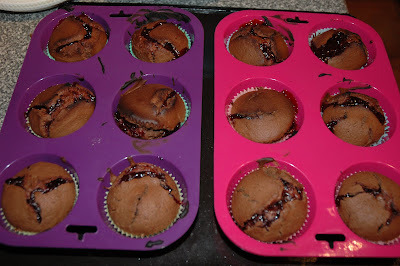 Unfortunately in the first batch the conserve rised to the top but I'd made so much mix I made a second batch and they were perfect and it sat right in the middle, for a nice big jammy bit in every bite! 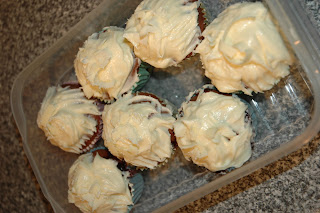 I followed Jules' measurements for the recipe and added my own tweaks:

Preheat the oven to 180 degrees C/ gas mark 4. Cream the butter and caster sugar together until there are no lumps, i used an awesome electric whisk which halves the effort. Add the eggs one at a time and mix. Combine the flours in a bowl. Add a third of the flour and mix in. Add a third of the milk and mix in. Repeat until all the flour and milk has been added. Melt the chocolate using half a pan of water with a glass bowl on top, put all the chocolate in the glass bowl and make sure the water doesn't touch the bottom of the glass or it's likely to burn the choc, fold the chocolate into the mixture. 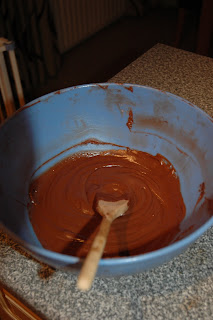 I spooned one teaspoon of the mixture into the cases, then I added a spoonful of the black cherry conserve finally trying to cover all of the conserve with more mixture so it doesn't rise to the top. Bake for 20 mins.

Cream the butter and icing sugar, and add the fromage frais gradually so its not too liquidy. Finally add the white chocolate, mix and ice the cakes as soon as possible. Use a knife and scrap down the chocolate to make some curls to put on top.

Thankyou Jules and Bailey for my guest spot, it's been fun, hopefully I can make you a little something for when you come down at the weekend!

Posted by Aimee at 1:50 PM
Email ThisBlogThis!Share to TwitterShare to FacebookShare to Pinterest