Some of you may remember that two months ago I took great pleasure in making Gwen Morris' Amazing Christmas Cake in preparation for this year's festive celebrations. Since that day, the cake has been tucked away in my cupboard in an airtight container maturing. However, the cake has by no means been out of sight out of mind. In fact, every time Bailey has had his friends over for a bottle of rum, the next day I have been 'feeding' the cake with generous glugs of said rum before resealing its container. Every time I pick it up, the cake seems to have doubled in weight which is of course very exciting. 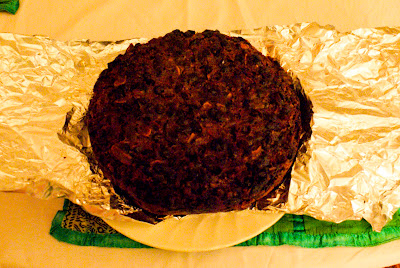 Yesterday the time came to ice the cake ready for eating on Christmas day. As soon as the cake was taken out of its box, the room was filled with an amazingly delicious boozy, fruity aroma. This caused Bailey and I to become slightly obsessed with smelling the cake... 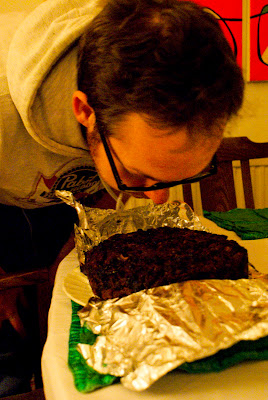 ...and sniffing the piece of foil the cake was wrapped up in... 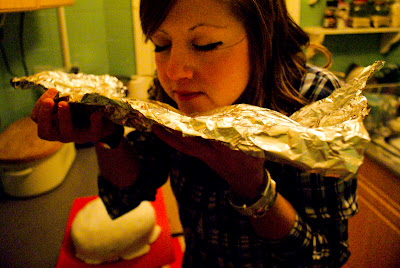 This may sound rather odd, but I tell you if only Smell-O-Vision had been invented, you would definitely understand.

Anyway, once we had gotten over the amazing pongs emanating from the cake, it was time to ice the cake. First I covered the top of the cake with a thin layer of apricot jam. 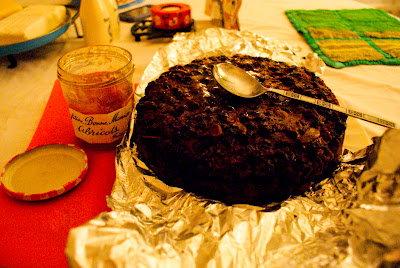 Next, time to add two layers of icing. I had never used marzipan or royal icing before and had planned to make both from scratch. However I make no apologies for the fact that in the end, what with everything that's going on at the moment I couldn't justify the time and just strolled into Asda and picked up both in ready to roll packets. 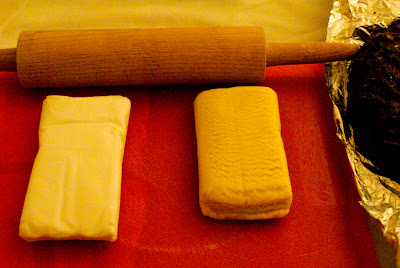 ﻿First to be rolled out was the marzipan. Actually more difficult to roll out than it looks, probably because "room temperature" (which is what you're meant to roll it out at) is pretty low at the moment in our house. This led to a debate between Bailey and me about whether or not I was about to break the dining room table. He won said debate and I relocated to the kitchen. 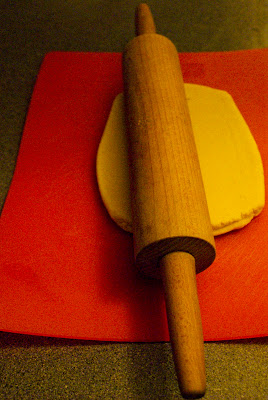 Getting the marzipan to the right size and shape was pretty tricky, as was putting it onto the cake without it breaking in half, however I soon realised it doesn't really matter as no one is going to see it and once it's on the cake you can pretty much sort out any little problems with your fingertips. 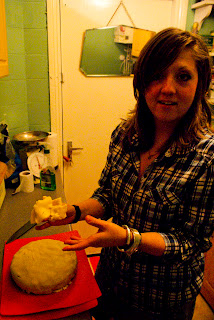 Once the marzipan was on the cake and tidied up, all that was needed was for the excess edges to be trimmed off ready for the royal icing to be added. 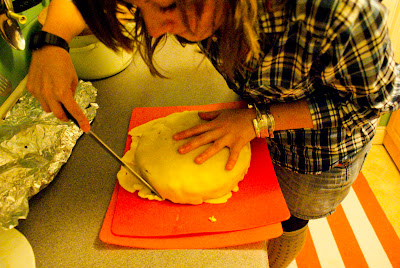 The royal icing was even more difficult to shape for some reason, after several attempts and one instance of the icing getting completely stuck to the kitchen work surface, I would recommend rolling the icing up into a ball, flattening out into a circle like a pizza base and taking it from there. 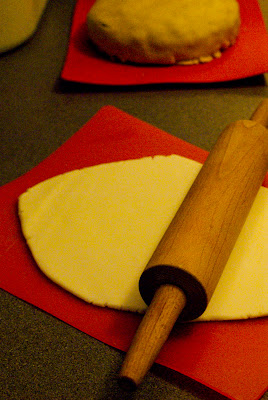 Finally, I added the royal icing to the cake and again trimmed off excess edges. 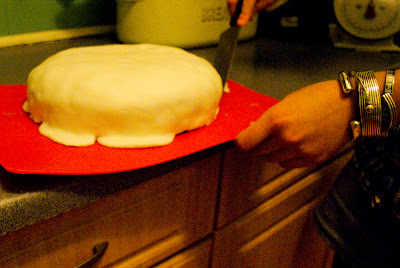 Et voila! A sweet smelling, boozy fruity cake ready for Christmas Day. I do seem recall several occasions on which I helped Nan out as a child by adding several decorations to her cakes such as ribbons, signs saying "Merry Christmas" and festive figurines. However as I don't have any grandchildren to help me my family will just have to enjoy the cake as it is. 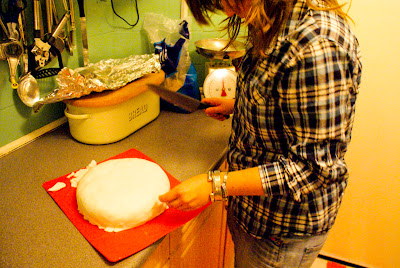 Posted by Jules at 1:36 PM
Email ThisBlogThis!Share to TwitterShare to FacebookShare to Pinterest