I make no secret of the fact that I think Chorlton is ace. It has exactly everything I could want out of a place to live and I love it. Unfortunatley, life has been unkind to us and we do not live in leafy Chorlton, we live down the road in not at all leafy Rusholme. We don't like to let this stop us from living the Chorlton lifestyle anyway (my friend and diehard Chorltonite Steve is always moaning about "you out of towners" coming and spoiling Chorlton for the people who actually live there - yeah well DEAL WITH IT) and we've been gradually ticking off its eateries over the years. One place we hadn't eaten at was a wee place called The Parlour - mostly known for it's insane Sunday roasts. 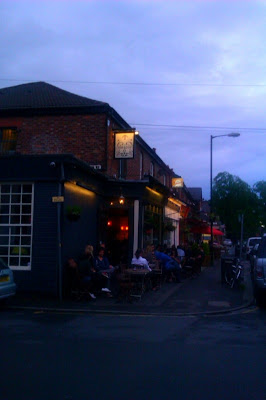 I've loved The Parlour ever since my first drink there when we met the world's cutest pair of Yorkshire terriers (called Aristotle and Socrates FYI) who were literally running around the place like lunatic dogs. We'd tried to eat there twice before but have never managed to get a table - a sign of its popularity. This week we were in luck - not only were we sharing the fabulous company of our lovely friends Doyle and Jeni of an evening, but we strolled in to The Parlour find an empty table of four with our name on it. Boom. 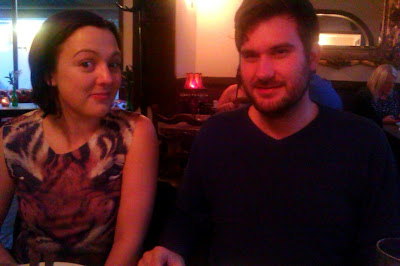 Doyle was excited as he'd heard Parlour served the intriguing starter that is Cod Cheeks - and wasted no time in ordering a plate of said dish from our super genuine and friendly waitress for him and Bailey to share. There were also several pints of quality booze purchased - I didn't partake as I was driving unfortunately but I know Bailey enjoyed his 'The Beast' bitter (not as badass as it sounds but very pleasant all the same) and 'First Deal' ale. 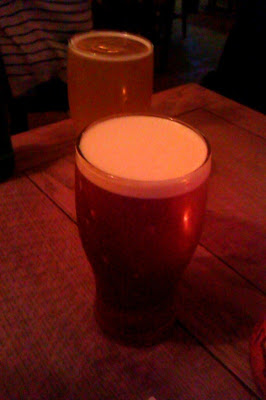 So as I said we were all looking forward to finding out what these cod cheeks were all about so we were taken aback when our waitress returned with all our mains... Oops! The cod cheeks had been forgotten! What a shame, but we didn't really mind too much as we had been distracted by the massive plates of awesome looking nosh in front of us. 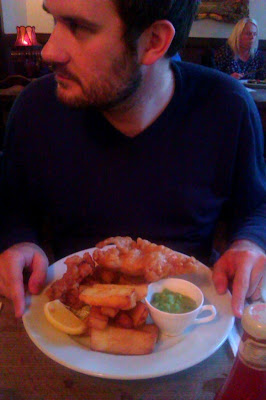 Doyle and Bailey had both ordered the Beer Battered Sustainable Haddock & Proper Chips with Manchester Caviar and Homemade Tartar Sauce. With a description like that it was going to have to be awesome and it was. The chips, the size of two regular sized chips in normal places, had the texture and flavour of great roast potatoes. The fish, rather than being served in one big chunk as per the norm, had been cut into three bits before cooking meaning more surface area for its light and crispy batter! Genius! The 'Manchester Caviar' - an inspired name for mushy peas - were served in a teacup (cute) and according to Doyle "made the dish" with their minty goodness. The homemade tartar was great and I was so annoyed with non-tartar eating Bailey for leaving it that I ate it off his plate myself with my fork, neat. Waste not want not. This really was a very delectable and cleverly thought out chippy tea. Not only did it deliver on appearance, taste and texture, it was miraculous in that it is the first chippy tea Bailey has EVER had that didn't make him feel sick or gross! It's witchcraft I tell ye. 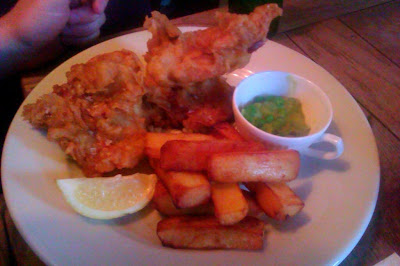 Comparing the boys' piled plates with ours, Jeni and I were feeling rather fed up with our choice of Flat Mushrooms topped with Garlicky Leeks, Spinach, Puy Lentils & Crumbly Lancashire Cheese. Moans and groans of "Ours are tiiiiiiiiiiiiinyyyyyyyy!" and "Ours is just veeeeeeeeeegetablessssss!" could be heard at quite a volume, but once we'd stopped grumbling for long enough to actually eat, we realised our dinner was delicious. The Lancashire cheese was rich and delicious on top of the lentils, leeks and spinach in a sauce which tasted like stuffing. But creamy. These guys had obviously been having a few words with Yotam Ottolenghi about how to make vegetables delicious in a seemingly impossible fashion. The red wine jus was very nice and quite subtle, but I did feel the need to put a bit of salt on the spring veggies that were scattered around the edge of the plate as they were a bit on the bland side. All in all a good dish which was really well-presented, but girls with a big appetite like me and Jen could have done with a few extra potatoes. 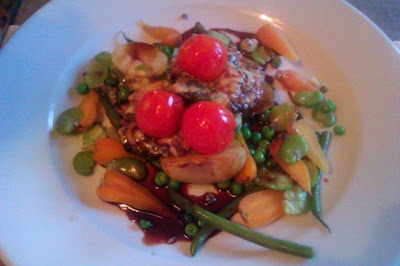 Onto dessert and our waitress had been replaced by an equally friendly male waiter who was great and well up for a bit of banter. I chose the Eton Mess which looked as pretty as a picture - in fact, just as I was about to tuck in, our friend and dessert queen Sophie strolled past and said how awesome she thought it looked. It was a fantastic Eton Mess, second only to the mind-blowing one I had at Harvey Nicks. It was a much more simple Eton Mess than the Harvey Nicks one - consisting of just a few elements done very well - whipped cream jam packed with vanilla beans, perfect meringue, slightly sharp summer fruits and some kind of sweet but light syrup. It was great and I loved every bite. 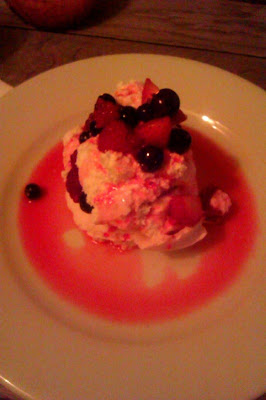 Doyle and Bailey chose the Chocolate Crème Brûlée which was apparently more like a delicious creamy chocolate mousse with the traditional brûlée burnt sugar topping. The generous two pieces of shortbread which accompanied were also lovely. 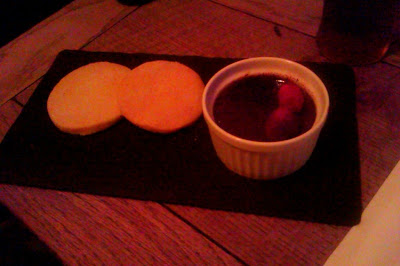 However, it was Jeni who really played the blinder this time round - when her Selection of British Cheese arrived we were gobsmacked. Had she accidentally ordered the "Cheese For Two" option on the menu? There was enough cheese here to sink a ship! 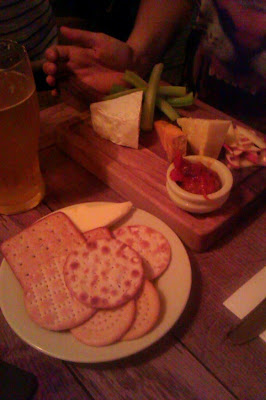 This more than made up for the modest portions of the veggie main and was a fantastic board of huge hunks of cheese, a really tasty tomato chutney and the most unnecessarily large serving of butter I've ever seen. There was so much that Jen couldn't finish it all and had to ask for our help - to which we bravely and selflessly agreed. As there was so very much cheese we did have to keep pestering our waiter for more crackers which he dealt with in excellent humour - thoroughly nice bloke that he was. About half an hour and three plates of crackers later, and we polished off the lot. Bravo! 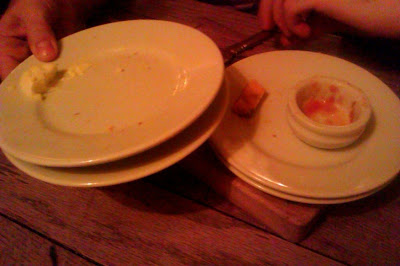 I have to give massive props to Doyle and Jeni in this post too, as when we'd finished eating Doyle took advantage of our sleepy post-meal slump to sneakily ask for the bill and pay for us before we could get a look in. What a treat and what lovely and generous friends they are.

The Parlour turned out to be an excellent place to spend time with friends as we felt very relaxed and at ease - they definitely deserved their title of 'Best Pub' in last year's Food and Drink Festival awards. The staff were excellent, although I'd like to make a suggestion which may seem a bit condescending - perhaps they ought to write stuff down! Neither of our waiters had pads with them and if it were me I would really struggle to remember people's orders, especially when you throw in a round of drinks! We didn't mind not getting our cod cheeks as it's a nice excuse to come back again but just a suggestion!! Anyway I don't want to sound negative as we really, really liked the place and the food was great. The Parlour is not just about the food - it's a great boozer as well and not pretentious at all - we'll definitely be back soon for some drinks at the very least and probably another meal - I want to try their renowned Yorkshire puddings one Sunday. Thanks Parlour and thanks lovely Doyles!

Posted by Jules at 9:15 AM
Email ThisBlogThis!Share to TwitterShare to FacebookShare to Pinterest