'Manchester Picnic' had been written in our Google Calendar for months - ever since Bailey tweeted The Hungry Gecko's Jackie Kearney asking when her next Manchester event was going to be. Although I'd been told that this was the third annual  Manchester Picnic street food event (organised by CityCo), we hadn't been before and didn't really know what to expect. 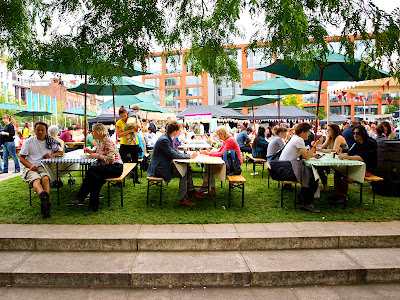 We were pleased to see that what is normally my least favourite eyesore in Manchester city centre - Piccadilly Gardens - had been transformed into a quite pleasant little food haven. Tables with gingham tablecloths and parasols had been laid out, bunting everywhere, swing music, hula-hooping for the kids and the smell of top notch grub in the air. 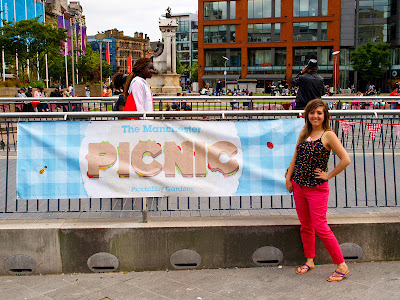 Our plan was to scope out the stalls and decide what we were going to eat before going off to run our errands in town to work up an appetite. Now before I go on to say what a brilliant and well-organised event this was, I do have to have a little rant as there was one stall that stood out from those run by independent businesses selling locally sourced food. This stall was Nando's - which disappointingly also had by far the longest queue. Now I don't know what CityCo's motivations were behind booking Nando's (I hope they had to pay double the amount that everyone else did) but it seemed a shame that they were taking up a space that could have been used by another local up and coming business. I was doubly annoyed when I went into the bank and heard whisperings of Nando's giving out free food (alright for them if they can afford to do that thus spoiling everyone else's chance of making a profit!) and I was triply annoyed when the woman behind the counter said "Are you going to the Nando's Picnic today?" I nearly bit her head off! Rant over, but I certainly didn't buy any food from Nando's anyway. 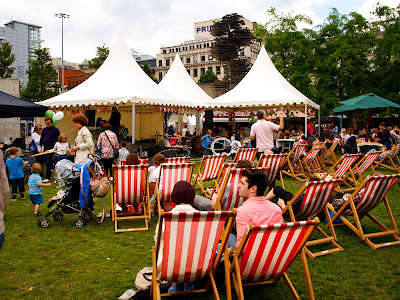 Bailey and I decided that we were going to try and eat from as many stalls as our bellies would allow because we were busy for the rest of the weekend so knew we wouldn't be able to return. I started my eating frenzy with a trip to The Tibetan Kitchen. 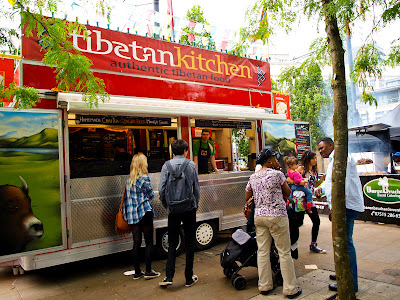 I ordered a portion of the Ngo Khatsa curry and a nice cup of Homemade Chai Tea. 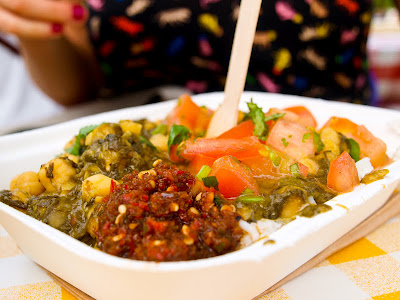 This was brilliant - just the type of hearty, healthy food I was in the mood for after our evening of indulgence the night before. The Ngo Khatsa had obviously been slow cooked so the spinach was really tender and the chickpeas nice and soft. The chilli sauce was very spicy but packed with flavour and it all went very well with perfectly cooked rice and a nice bit of fresh salad. The Chai Tea was also great - very milky, spicy and sweet with a kick of ginger. Hit the spot! 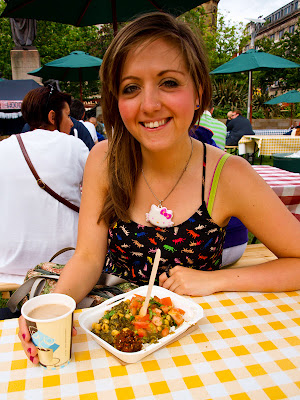 While I was munching on this vegan delicacy, Bailey's first snack was quite the opposite of mine. He had chosen to go to Castro Grill - purveyors of Southern US foods that is so en vogue at the moment. 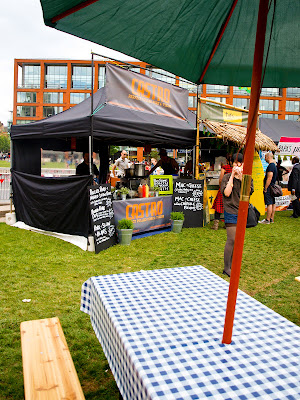 Bailey is a recent pork convert and as a result has been on a quest to get his hands on a decent pulled pork sandwich, including making his own ones for a boys' poker night he hosted. He was pleased to say that Castro's melt in the mouth pork accompanied by amazing coleslaw and a great barbecue sauce was the pulled pork sandwich experience he'd been waiting for. His only complaint was that the pork was so good he'd wished there'd been a little more of it in the bun! 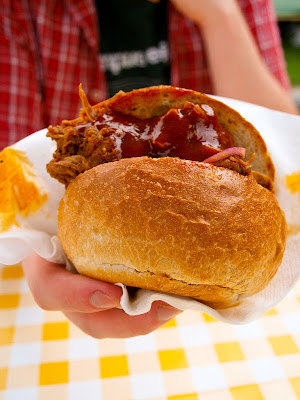 Bailey was also very tempted by Castro's Mac & Cheese but resisted as he wanted to save stomach space for further treat eating. 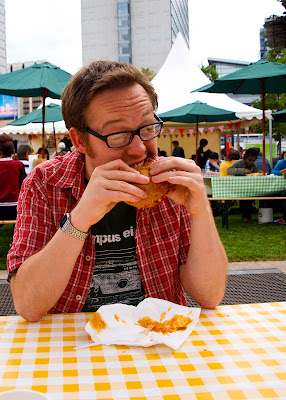 Next up for me there was only one option really and that was to get myself a portion of Popcorn Tofu with Asian Noodle Salad from The Hungry Gecko. I've been wanting to attend one of Jackie's supperclubs for ages and although this wasn't quite as exciting as getting to eat a full three-course meal cooked by her in her home, I'd still been salivating over tofu since she'd tweeted about it a few days earlier! 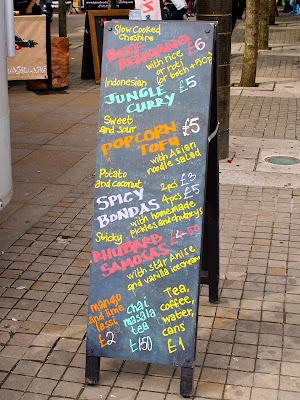 This dish certainly did not disappoint - I love tofu anyway but Jackie had worked wonders with the stuff and I loved the flavour of the thick, slightly sticky batter on the outside. The sweet and sour sauce was delicious and I liked the crunch from the spring onions and fresh chillis. Not only that but we were excited to be given a can of Mango flavoured Lilt which neither of us knew existed! 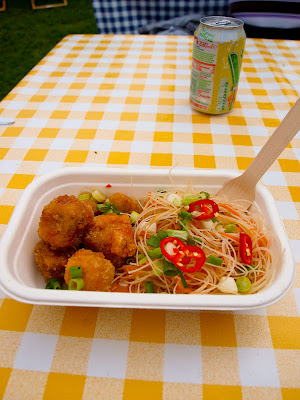 Bailey had decided that he was going to try out some of the fine-smelling Brazilian meaty treats that were flying out of Tio's Snack Shack. 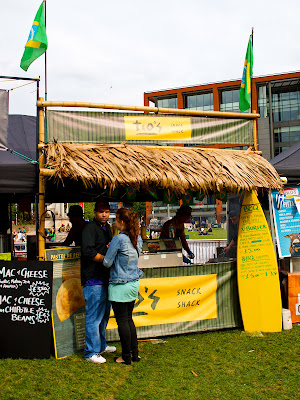 He was in the mood for a good burger and chose the X Burger with Bacon which was quite an awkward eat as every time he took a bite, the patties would go in one direction and the bun would go in another. When you did manage to get a bit of everything in your gob, the combination of bun, burger, cheese and bacon with the hot sauce was brilliant. A messy job worth completing. 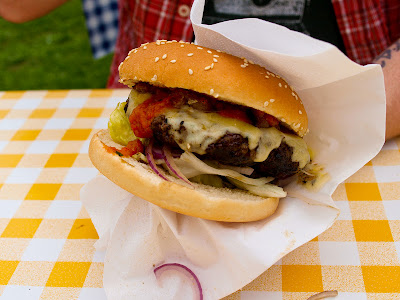 The Manchester Picnic was a really great event with plenty of options for all types of food lovers. It was great to see Piccadilly Gardens put to good use rather than simply being a place for the ne'er-do-wells of Manchester to hang around. We wished we could have stayed in town longer to sample a few more treats - the ones that got away were definitely Fire and Slice Artisan Pizza (we were hosting a pizza evening at our house that night so couldn't justify it to ourselves!) and Fish & who were selling "traditional fish and chips with a twist" - the mackerel sub had me drooling and some of our mates told us this was their favourite place of the picnic! Damn - we'll have to wait til next time! 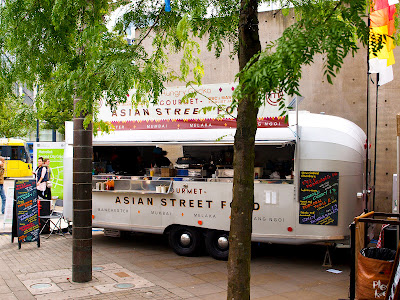 We're already looking forward to our next opportunity to eat delicious street food and get away with being really gluttonous, which will no doubt be at the Manchester Food and Drink Festival later this year. 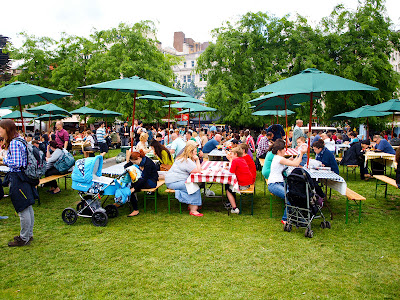 Posted by Jules at 9:59 AM
Email ThisBlogThis!Share to TwitterShare to FacebookShare to Pinterest