So lets get this out of the way, SoLIta has probably had the best opening of any restaurant I've ever witnessed. Everything I've heard about this restaurant has been overwhelmingly positive, photos that made my knees tremble have been published, anecdotes about the owners have been recounted and twitter trends have been skewed causing a New York newspaper to call SoLIta to question their Aperol consumption. 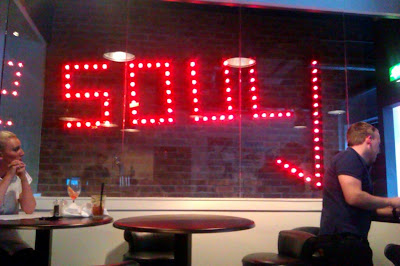 We were not disappointed.

I have to admit we were on a high when we decided to visit SoLIta on the spur of the moment. A rum, a pint of strong beer and a giant hotdog had already been consumed when we decided to make an impromptu visit. A visit had always been planned but further down the line for the reason that we didn't think we would get in. That fear was almost realised as we saw a few peeps being turned away. We felt no guilt as we chowed down I can tell you that. 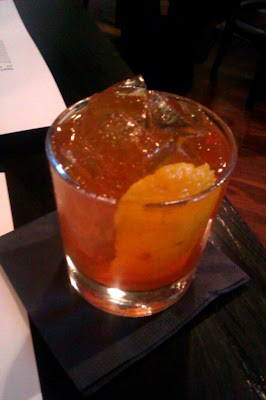 I suppose I should give you some detail about why this eatery has just become one of our favourite Manchester restaurants. Firstly the service. Brilliant. Our waitress was fantastic, she was friendly and genuine and wanted to help us choose the best dishes and cocktails. She cared which was a theme that ran through the entire experience. Beyond our waitress the bartender was great (which was lucky because we had potentially the worst table in the house, slap bang next to the bar, we loved it because we could just turn our heads 45 degrees to talk to the bartender and chat about our next drink), he knew what he was doing without being a know it all prick (a symptom of a lot of good Northern Quarter bartenders). Drinks consumed included an Old Fashioned, a Tom Collins (both excellent cocktails), a Rauchbier (tastes like Frazzles) plus several Havana 7 years on ice. There's something about the place that makes you want to get tipsy. 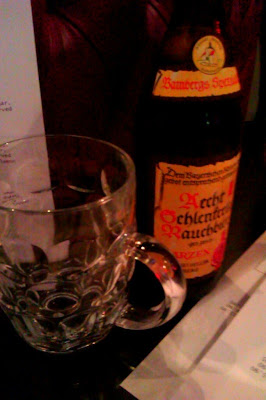 We talked to quite a few other people who weren't 'designated' as serving us, the other waitresses and staff were so attentive that the slightest raised eyebrow or glance at an empty glass prompted a SoLIta angel to swoop in and enquire if there was anything they could do. It wasn't over attentive customer service that I hate, they were actually looking at peoples faces and reading what their customers wanted. Its called perfect service, only ever experienced here and at our two other favourite restaurants. It was perfect and then we met Dom. Dom is the boss and he carries out all the duties of a boss LIKE A BOSS. He was the ever watchful eye on the restaurant, both swooping in to greet people with supreme friendliness and commanding his floor staff like a Roman general. That last point might seem a little weird but I actually really appreciate hearing this as too many restauarant managers float around doing nothing and just counting the money at the end of the night, not Dom, he was in the thick of it. Also he gave us some free drinks and educated us about Averna. 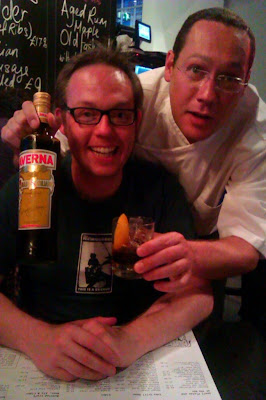 So the service was spot on but what about the food. It was fairly faultless in short. For starters Jules went for the Ouvo Pomodoro, a little casserole of eggs & tomatoes accompanied by light sourdough toasts, she loved it. Jules' default option is to choose the healthy option on the menu and this ticked that box but was also full of flavour. 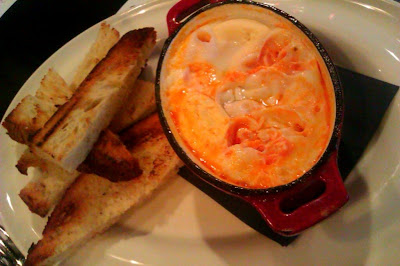 There are few things that I like better in this world than mac n cheese. It is the most comforting food for me alongside meat and potato pie, it is my go to food for satisfaction. The deep fried mac n cheese balls served at SoLIta didn't quite hit the spot that I expected. The flavour is brilliant, the coating had a really distinct taste to the creamy, cheesy filling, definitely a much more subtle and complex flavour than I was used to with mac n cheese which normally has a sledgehammer of heavy cheese and pepper flavouring. The surprise came in that the balls (tee hee) were pretty unsubstantial, once they were pierced then the liquid cheese escaped along with just a few macaronis, I felt I was just scooping up cheese soup with the crusts with the odd bit of carb. Delicious tasting soup though, and the homemade ketchup was a winner. 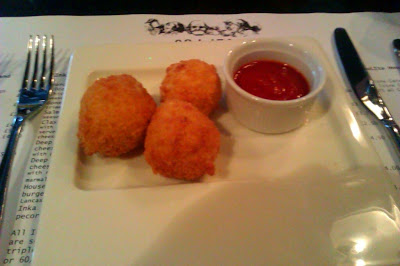 For the main course Jules went for the Inka Grilled Salmon. For anyone who hasn't heard of an Inka Grill before (me included until about two weeks ago) it is a badass charcoal grill that goes to a ridiculous heat which allows the chef to cook fish/meat/veg so that it gets that charred bbq flavour on the outside but remains soft and in the case of meat/fish rare on the inside. The salmon appeared looking blackened on the outside but as soon as you broke through the crispiest fish skin of all time you reached the soft and juicy fish. The bbq flavour had permeated through the skin and infused with the entire fish to varying degrees. Because of the rub and the cooking technique it really didn't need anything adding to it but the citrus kick of the side salad complimented the fish. I had a little taste myself and it was splendid. The fishy main course Jules went for proved that it's not just meat the SoLIta have nailed. 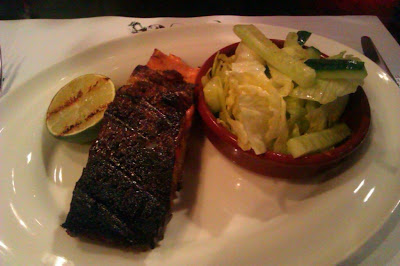 My main event and the absolute biggest draw for me was the Hanger Steak, again a term I had never heard of until two weeks ago supposedly because very few butchers used to give this cut of meat away as it was the best. If I was a butcher you would never set your beady eyes on my hanger steak. I'm not sure who was the hero here, it was either the cut of steak which was incredibly tender and flavoursome or it was the cooking method which cooked it perfectly (I know I am over using the word perfect here, sorry about that). It was simply the best steak I have ever eaten. I had ordered a bourbon bbq sauce to go along with it but it never arrived, I was so happy that it didn't as the steak didn't even require any further seasoning it was so full of natural flavours, I would advise against any of the extra sauces for the hanger steak, just take it natural! Alongside my steak I went for the 60/40 mash which would have been an incredible experience on its own, the smoothest, most buttery, most velvety, most luxurious potato product you ever will devour. It sounds stupidly simple but this well cooked steak with no sauce alongside potatoes mixed with butter was one of the most exciting plates of food I have ever stuck down my gannet. 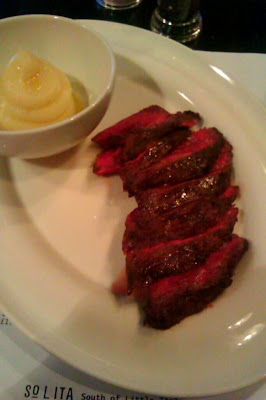 The desserts carried on the naughty but luxurious nature of the meal. Although Jules went for the simple sounding Inka Roasted Pineapple, what actually arrived was a rich and sweet fruit treat accompanied by the creamiest of coconut ice creams (provided by Cabrellis of Manchester). Jules thought the overall effect was a Piña Colada in dessert form, especially when you throw the 7 year Havana in to the mix. 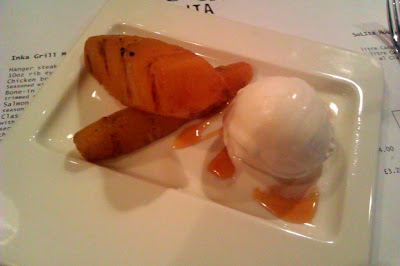 There was only one option for me for dessert (although the idea of dessert was debated as I wanted to end the meal on the high point of the main course) which was the already famous, after two weeks, Deep Fried Coke. It isn't as debaucherous as it sounds, what it actually consists of is coca-cola infused churros drenched in cola syrup served with another great ice cream. What it turns in to is a race against time to consume the crunchy, sweet, hot doughnut treats before the ice cream melts and you are left with a doughy stick floating in a creamy coke sauce. Although it is a race against time it isn't like it tastes any worse when it turns in to the churros/coke bog at the end, it tastes amazing during every spoonful. I don't want to sound like a douchebag here but the smells are also reminiscent of an American theme park which for me and Jules was a big bonus. My joint favourite dessert of the year, will be ordering again next time. 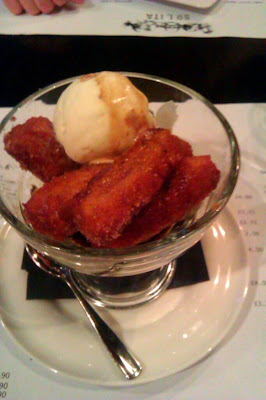 I think you might have the point by now that we enjoyed our visit to SoLIta throughly. Taking the jaw dropping food, the perfect service, the great atmosphere of the buzzing restaurant and the bar, which was both proficient and a draw in its own right. I really think this will be the establishment we bring every single one of our meat-eating friends to. We already have a plan to visit at least twice in the next month despite our usual reluctance to revisit restaurants when we have such a long list of highly recommended eateries that we haven't yet been to. And we're not the only ones - we know that several Manchester food bloggers have eaten at the restaurant more than once since its opening two weeks ago, including Dolly Bakes and Mrs Petticoat who we had the pleasure to run into (they were on their second visits)! I really hope that such passionate restauranteurs continue to have the success they deserve. 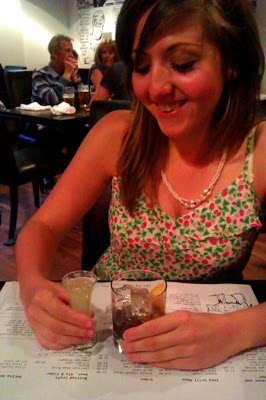 Posted by Bailey at 1:31 AM
Email ThisBlogThis!Share to TwitterShare to FacebookShare to Pinterest