Bailey and I were feeling very pleased with ourselves on Tuesday night, having snared ourselves an invite to the soft opening of Fresco Freddo's Gelateria. 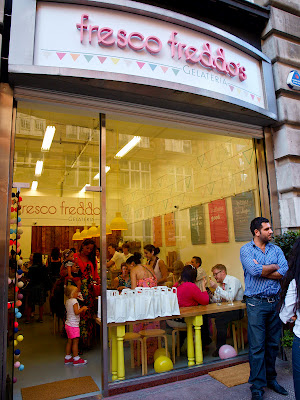 On our last summer holiday Bailey and I loved popping into Patisserie des Princes in Marrakesh for a post-dinner ice cream. When I lived in Barcelona my housemates and I were spoilt for choice of places to get a scoop or two of gelato on our way home from meals out of an evening. I've always remembered the scene in Sex and the City where Harry takes Charlotte on a late-night trip to Tasti D-Lite. So why is it that everywhere else you can get frozen desserts at all hours yet here we are expected to make do with a piffling frozen yoghurt stand at the Arndale Centre? Well I needn't grumble anymore as Fresco Freddo's are here to answer all our gelato prayers - and they're open til 10pm so I will be able to be just like Charlotte and make Bailey take me there late at night! 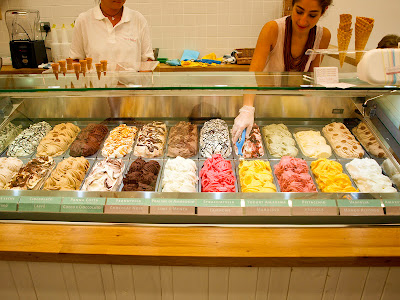 As usual I was feeling a little awkward on arrival at Fresco Freddo's (I was the dork who brought a print-out of our invitation and tried to hand it over to the lady on the door) but the staff were so welcoming and made us feel at ease straight away. They were so passionate about their gelato (which I learned is much healthier than ice cream because it's made with milk instead of buttercream AND their sorbets are fat free) and seemed so excited for us to try all the flavours that we couldn't help getting all giddy too. 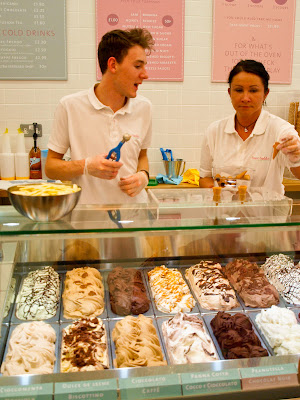 We were told that we should try to get a taste of every flavour of gelato and seeing as we had only put an hour on the car because our landlord was coming over, we felt fully justified in basically standing at the counter and ordering mini-cone after mini-cone of the stuff in quick succession. 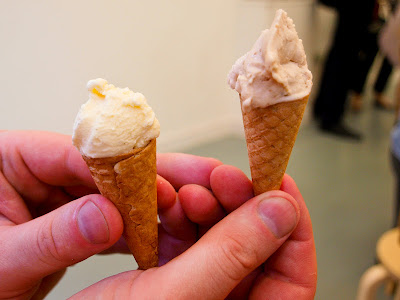 What we loved about being at Fresco Freddo's was that it did feel a little bit like being on holiday, not only because having a million different flavours on offer is such a novel idea in Manchester, but also because of the taste of the gelato. Ice creams you get here only ever seem to taste of a flavour of the thing it is supposed to taste of. Whereas abroad (and now at Fresco Freddo's) they taste exactly like a delicious creamy version of the thing it is supposed to taste of. If that makes any sense at all. Take the Lime and Mint Sorbet for example, as soon as you put it in your gob it was like you had just drunk the most minty, limey mojito ever. And the Amaretti Biscuits Gelato tasted exactly like lovely Italian amaretti biscuits. Genius. Another thing that was ace about them was that every single one we tried was incredibly smooth - not an ice crystal to be seen. 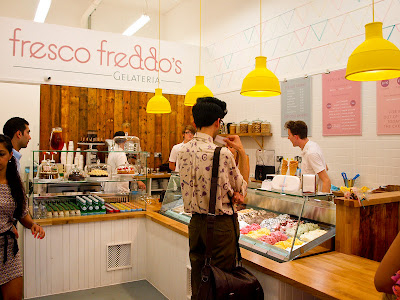 My personal favourite flavours were the aforementioned Amaretti Biscuits, the Hazelnut Gelato, the Peanutella Gelato and the Passion Fruit Sorbet. Bailey's favourites were Mint Choc Chip Gelato and the Dark Chocolate Sorbet. Everyone I spoke to seemed to have a different favourite flavour and I've realised that it's a really personal thing so my advice would be to get yourself down there and try a few to find your own favourites. Then again, it sounds like the flavours will be changing quite a bit depending on the season so we'll look forward to trying some new ones too!

Can I also point out that Fresco Freddo's will also be serving waffles and cakes - there was a fine display of baked items on the counter and the taste of brownie I had was a delight. I'm hoping the whole waffle-eating trend will catch on here like in Belgium and that in future we will be able to go out for late-night waffles with Doyle and Jeni like we did in Bruges! 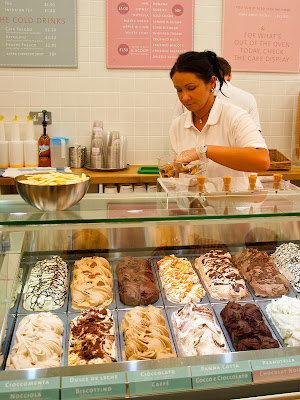 We really hope Fresco Freddo's have the success they deserve - we will certainly be taking our friends there, especially those who come to visit us from less fortunate cities such as Sheffield where there are no gelaterias. Thanks to all the staff for being so nice to us, letting us eat loads of gelato without judging us for being gluttonous and for giving us a goody bag to take home which contained an entire cone full of sweeties. Winner! 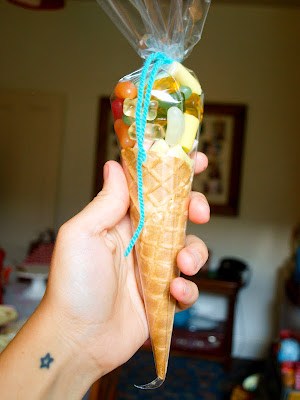 Posted by Jules at 9:42 AM
Email ThisBlogThis!Share to TwitterShare to FacebookShare to Pinterest