I'm not a teacher but Jules is.  What this means is that my heart is crushed as Jules rolls in to her 6 weeks holidays and I continue to slog away at work.  That said it does mean that we tend to go out and do more things mid week as only I have to suffer the effects of over indulging the next day.  One of those very activities was getting down to Port Street Beer House (a treat in itself) and eating a hot dog from Dirty Dogs on a Thursday night. 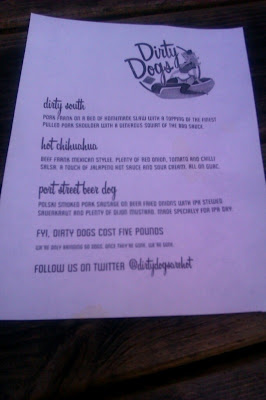 Now this collaboration of beer and dog didn't happen for just no reason.  It was in fact 'IPA day' which is a thoroughly made up day celebrating 'one of craft beers most iconic styles: India Pale Ale'.  Now I didn't really need an excuse to celebrate IPA's existence as I have been celebrating it quite a bit recently since consciously making a decision to apply the same rules I apply to the food I eat to the booze I drink e.g. avoid chains, avoid brands, buy local, try new/different things etc.  The beer that seemed to catch my eye at the bar was Quantum Brewing Co.'s collaboration with Bitches Brewing Co., Chameleon IPA.  Unfortunately my under developed beer taste vocabulary means I can't really do it justice so if I just try and sum it up as the best pint of IPA I've had in years that will have to do, it was full of deep flavours but was still quite crisp, something of a contradiction in my newb ale brain.  Maybe that's why it's called Chameleon??

Beer purchased from the busy bar (it seemed this meeting of offering food and celebrating IPA day was a real boon for Port Street!) we turned to find the queue to the yard was backing up in to the pub.  Not a problem, pint in hand we joined the line, had a few nice chats with people, studied the menu, absorbed the air which hung heavy with hot dog based flavours, studied the Futurama based graffiti over the fence and before we knew it we were at the grill ordering our dog.  I say 'our' but in fact it was only 'my' as Jules is vegetarian there wasn't much to offer but that is not to say Dirty Dogs are opposed to veggie-dog, they have confirmed that a non meat based dog could be on the cards in the future.  I have to say I think it would be a real hit as all too often people assume that all vegetarians want to eat is green leaf salads and raw vegetables, I'm afraid vegetarians like dirty food too, accept it. 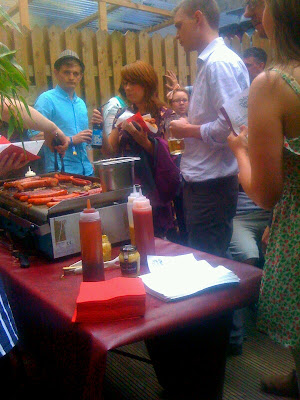 It was a tough choice but I went for the Dirty South Dog which was comprised of a pork dog, homemade coleslaw and then topped with pulled pork and BBQ sauce.  Like I say it wasn't an easy choice and I think I would have been just as happy with either the beer stewed kraut or the beef dog mexican style.  But I was definitely happy with my choice, it was amazing, definitely the best dog I've ever had.  I'd previously eaten dogs in Germany, France and more upmarket places in England and never really been that impressed with the quality of the dog itself, it always seemed really tough (but tasty) and I had assumed this was the way it was.  I am pleased to say that this is not the way it is, Dirty Dogs have a great texture to them!  There is not even a hint of toughness here but at the same time we are not talking about the sloppiness of 'Ye Olde Oak' tinned dogs, still got a bit of bite to it!  The flavours of the dog were also brilliant especially when you think about the strong competition coming from the pork, slaw and sauce, the dog was still the main flavour, it wasn't drowned out at all.  But those sides, what a great combination, the slaw and the BBQ sauce were both spot on and the pulled pork had a great flavour.  If I was nit picking I'd have to say that the pulled pork, although tasting great, had the texture more of stewed pork rather than pulled pork.  Like I say still tasted great and might have been a symptom of cooking on unfamiliar ground.  The pork did have one other major problem but I can't blame the Dirty Dogs guys for this one, I had developed an incredible inability to keep my pork placed firmly on top of my dog.  Every bite sent an avalanche of pork to the beer garden bench (a pig-slide?) and had to be scooped up and rearranged on the dog again.  I was left in quite a mess but I didn't see anybody else struggling so lets put it down to my poor hand eye mouth co-ordination. 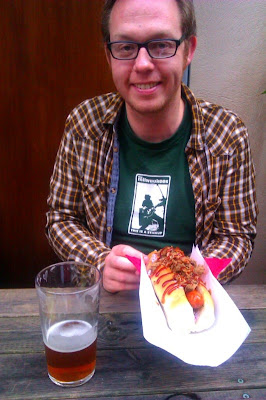 In summary I drank a beer that didn't taste like any beer I had drunk before and ate a hot dog that didn't taste like any hot dog I had eaten before.  Both were brilliant.  I really had hoped that Dirty Dogs had been at the Manchester Picnic so I could have tried something else from the menu but instead we were given Nando's (really?  Did Nando's really need to be at the Manchester Picnic?  Wouldn't it have served Manchester better to have an independent or local eaterie?  Pffffft).  Anyways this union of beer and dog was a real success and we shouldn't have to wait until August 2nd 2013 for it to happen again, sort it out people. 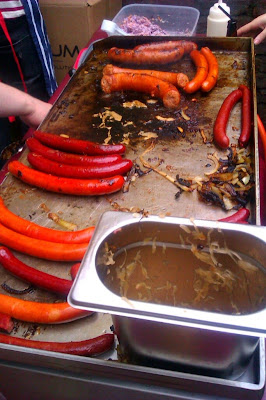 PS I am slightly ashamed to admit it but the evening's eating didn't end there, wandering around Manchester trying to find Jules a snack to eat we stumbled across a little restaurant we had heard of and sat down to what can only be described as an above average meal :)

Posted by Bailey at 10:10 AM
Email ThisBlogThis!Share to TwitterShare to FacebookShare to Pinterest