Recently Bailey and I were in sunny Sheff Vegas over the weekend to celebrate jointly the birthdays of both me and my dad. My mum loves going out for countryside drives so we decided to hit up a country pub for our lunch. In the interest of trying out somewhere new (both in terms of eatery and 'little Peak District town'), we chose The Samuel Fox Country Inn in the Hope Valley mining village of Bradwell, which we had found on @FeastAndGlory's extremely useful "Sheffield favourites" page. Lovely stuff!

We rolled up on a quiet Sunday lunchtime and decided to take advantage of their two courses for £26 or three courses for £32 lunch offer. Not alarmingly expensive but enough for expectations of the food to be high (not forgetting also that chef proprietor James Duckett has worked under allsorts of food honchos including that absolute badass Marcus Wareing). 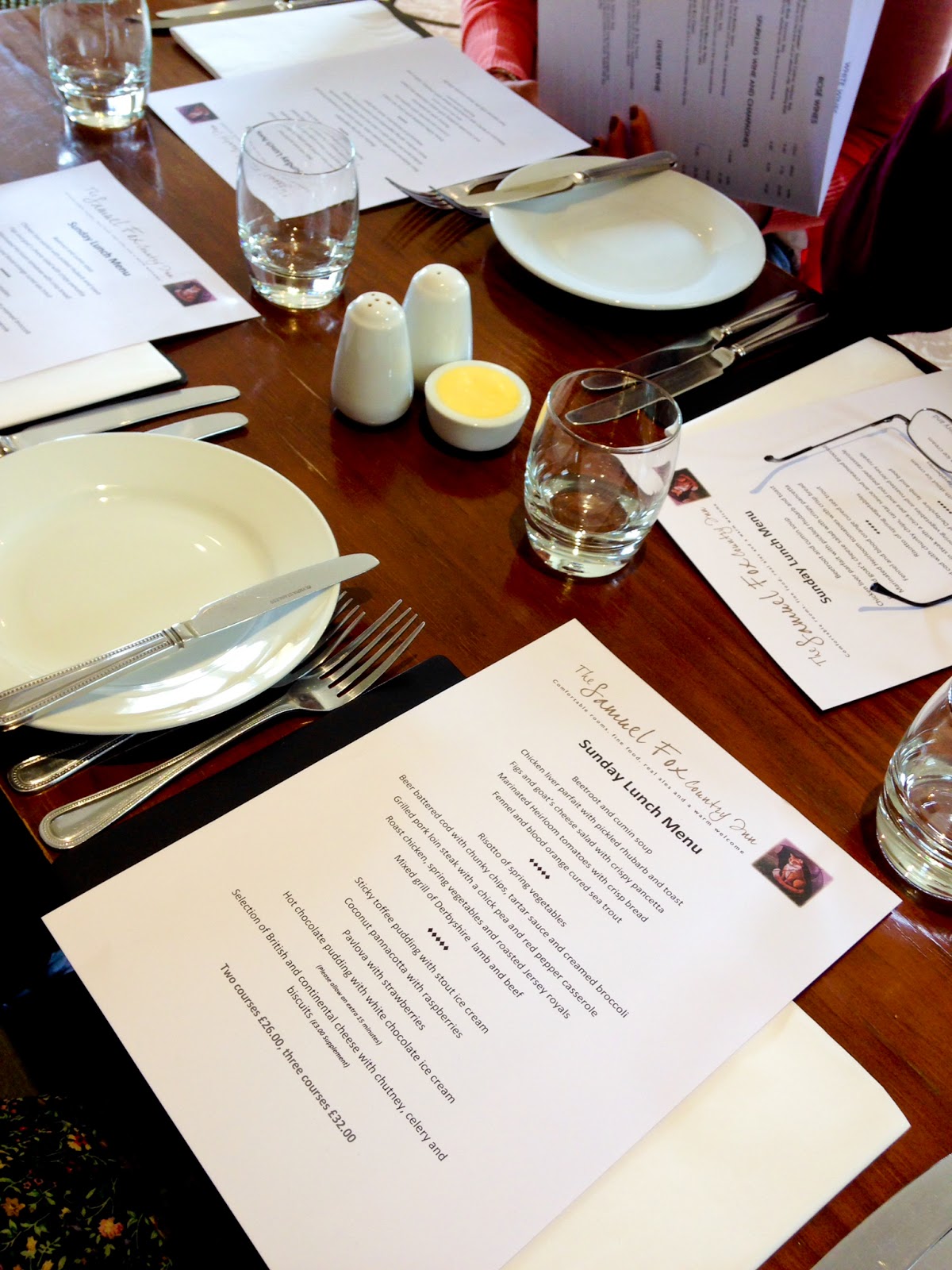 No better way to start a meal in a country pub with a pint of good quality local ale, and the Bradfield Brewery Farmer's Blonde more than did the job. What really impressed us however was the fresh bread. Now there have been a few debates about bread lately and we've always made it clear that we're firmly in the "if a restaurant gives a shit, it will make sure its bread is good" camp. Well Sam Fox certainly gives a shit. Those crackers - MM! So good we ordered more. 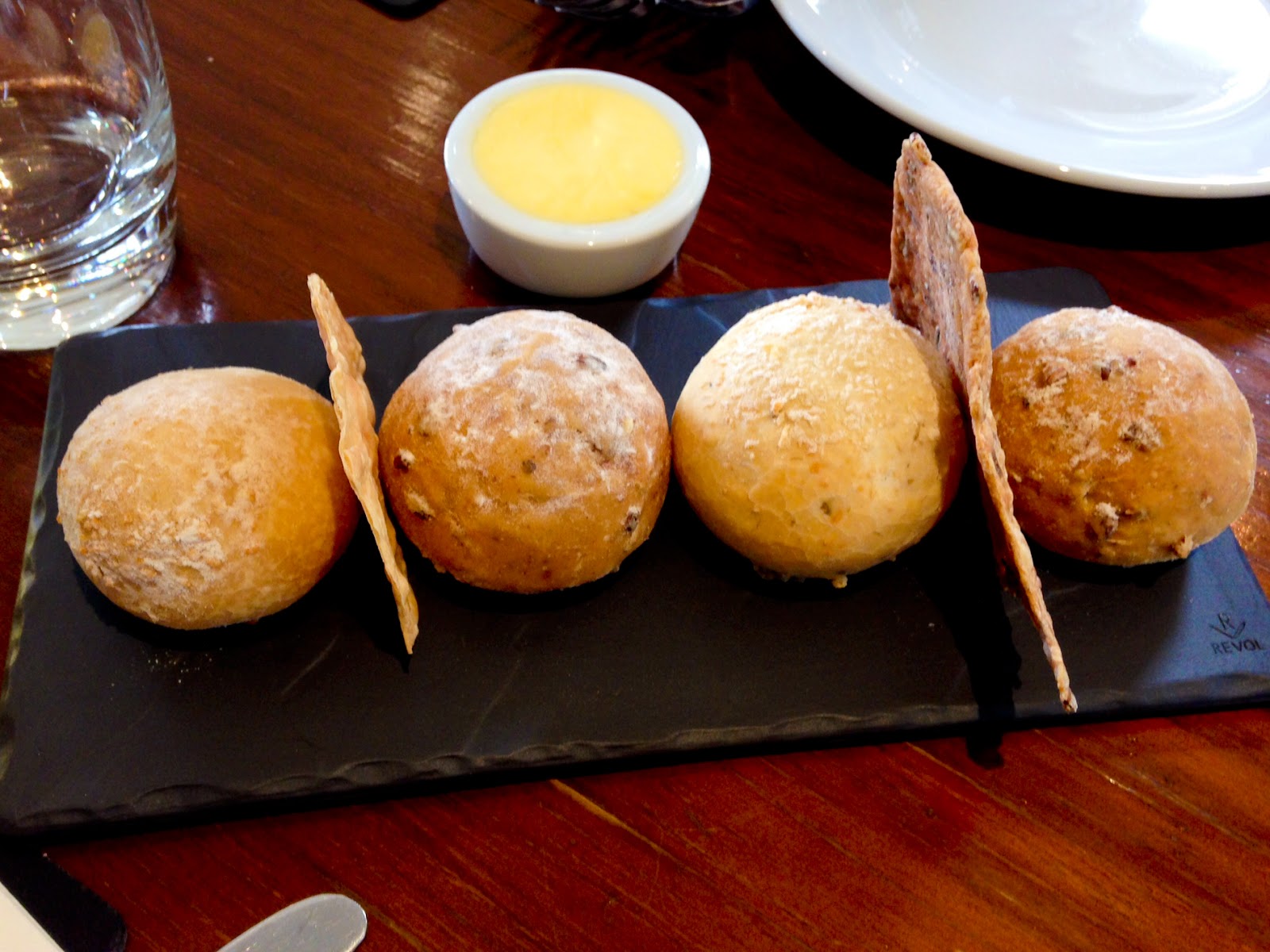 Onto the starters and the majority of us around the table were on the Fennel and Blood Orange Cured Sea Trout - fancy pants presentation or what? It tasted great too - perfectly balanced and a delicate and dainty starter. A big hit. 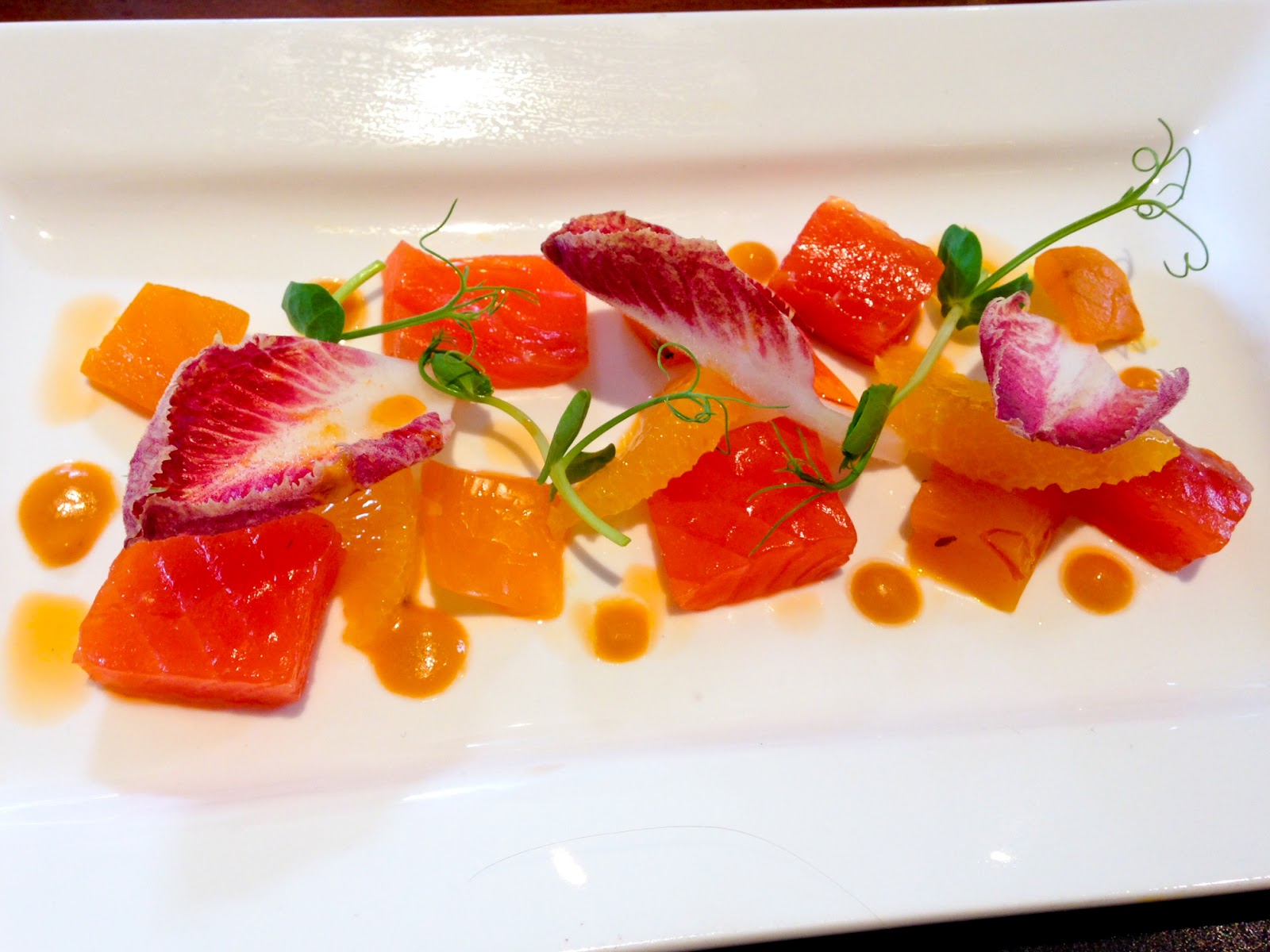 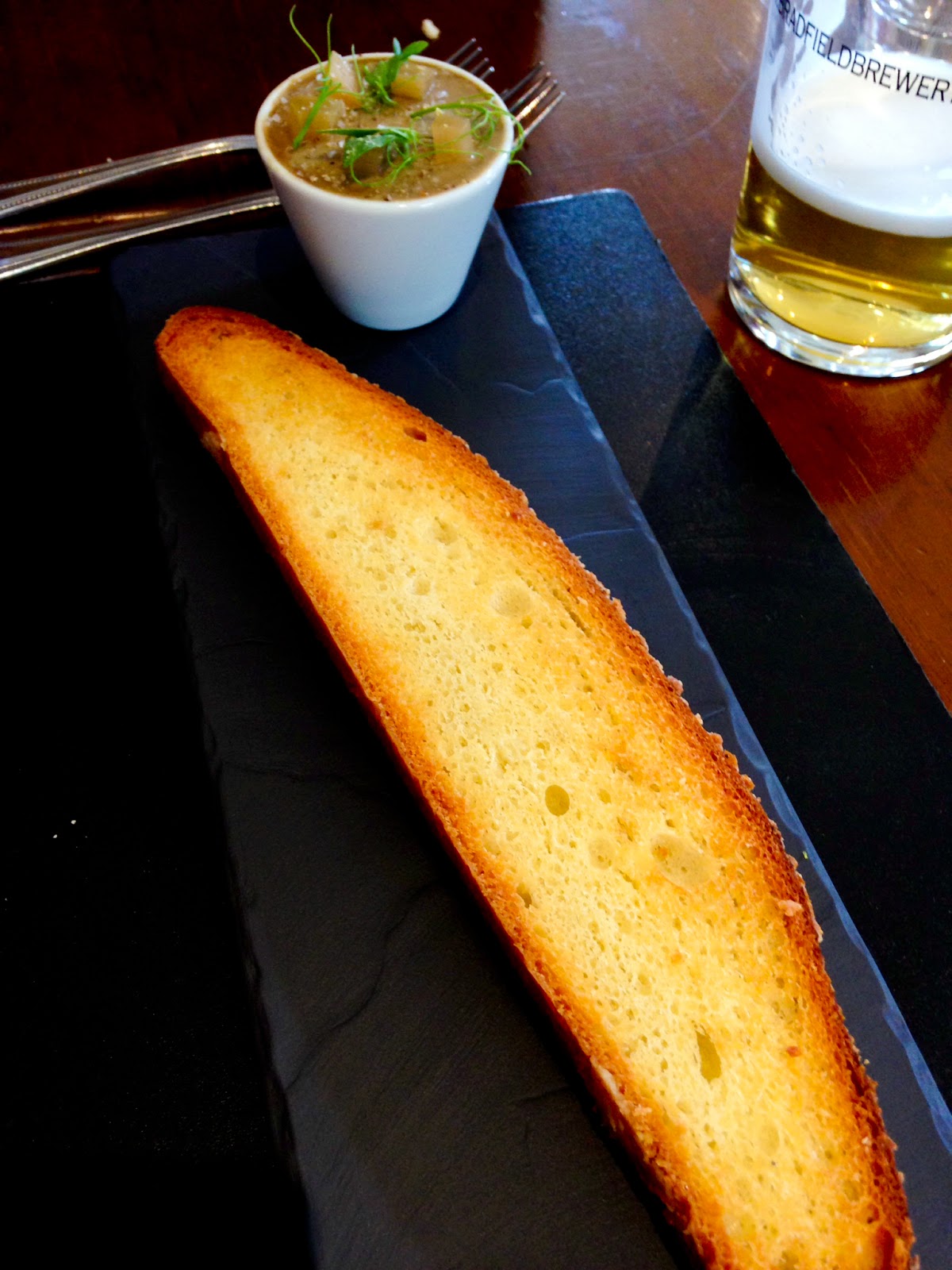 Main courses were just as much of a hit. My dad was on the Beer Battered Cod with Chunky Chips featuring a beautifully light batter, thrice cooked chips Heston would be proud of and an insane tartare sauce. My mum described her Roast Chicken with Spring Vegetables & Jersey Royals as "to die for". Happy parents! 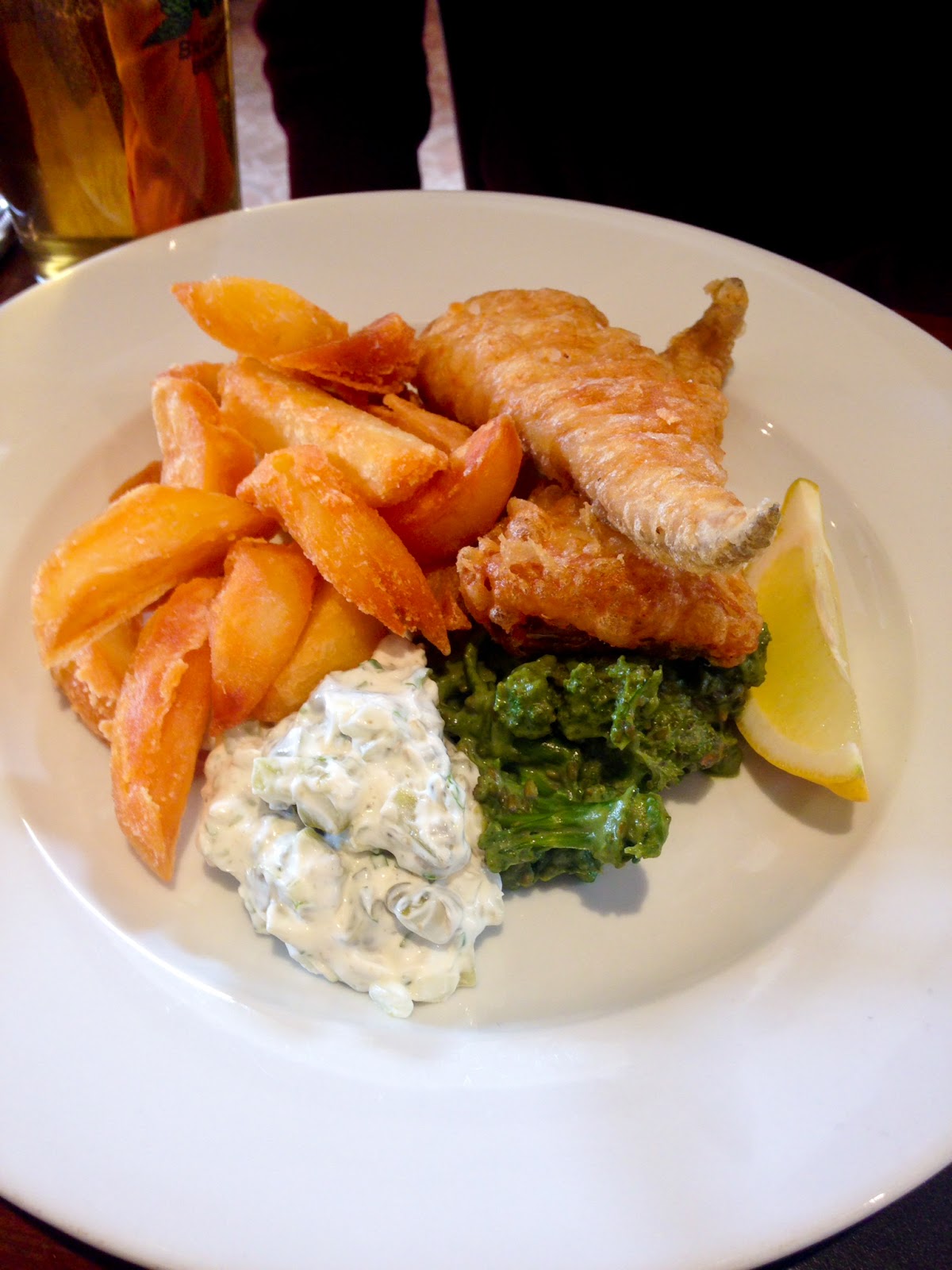 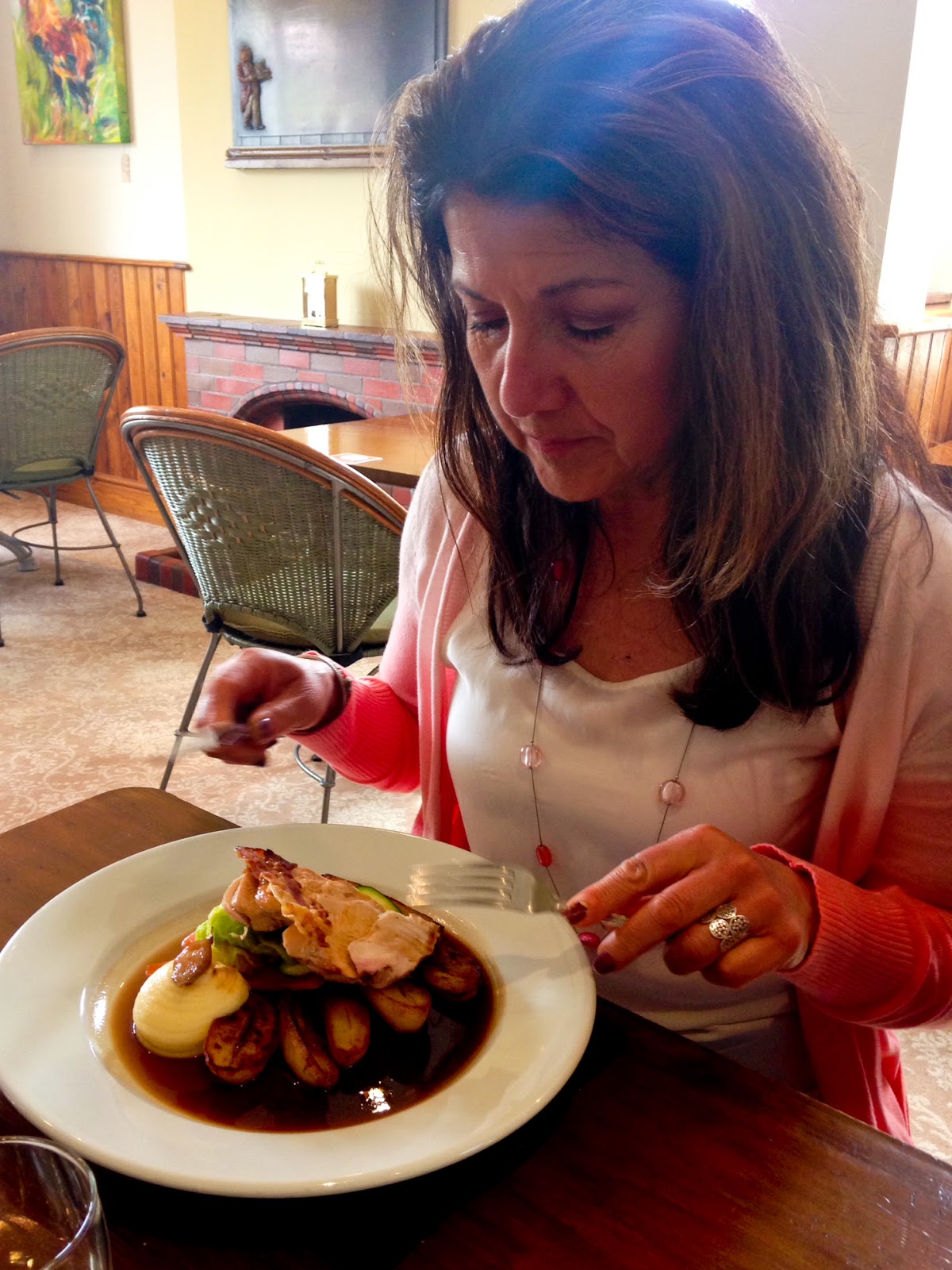 Bailey's Mixed Grill of Derbyshire Lamb & Beef had a lot of finesse considering it was basically a massive plate of delicious meat featuring some unusual little twists like the mini shepherd's pie. This was great as it had all the merits of an ordinary Sunday lunch but was a bit more exciting. 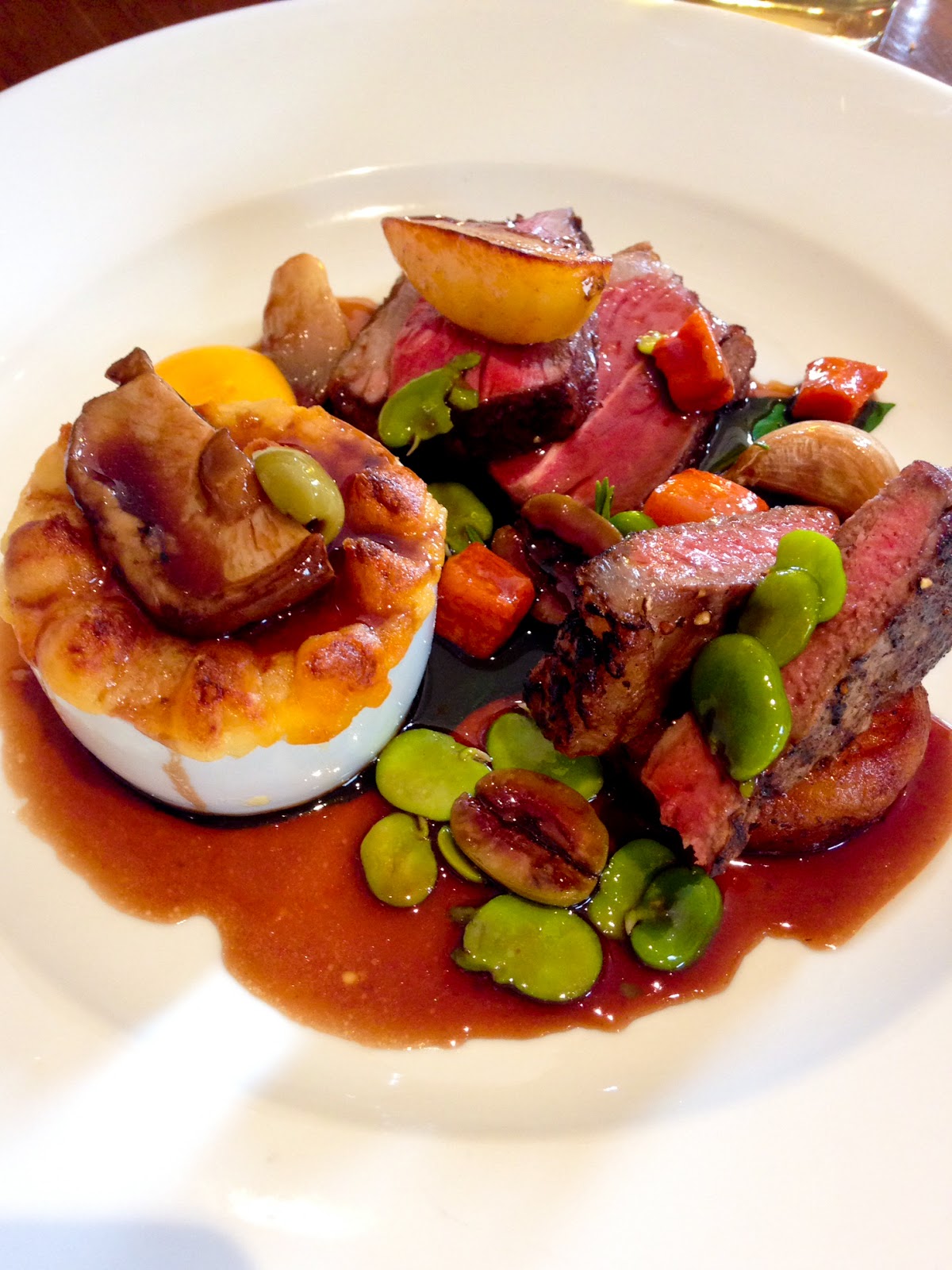 My Risotto of Spring Vegetables was a fantastic veggie option and was a delight to eat as I kept finding all sorts of unusual mushrooms and unexpected greens. 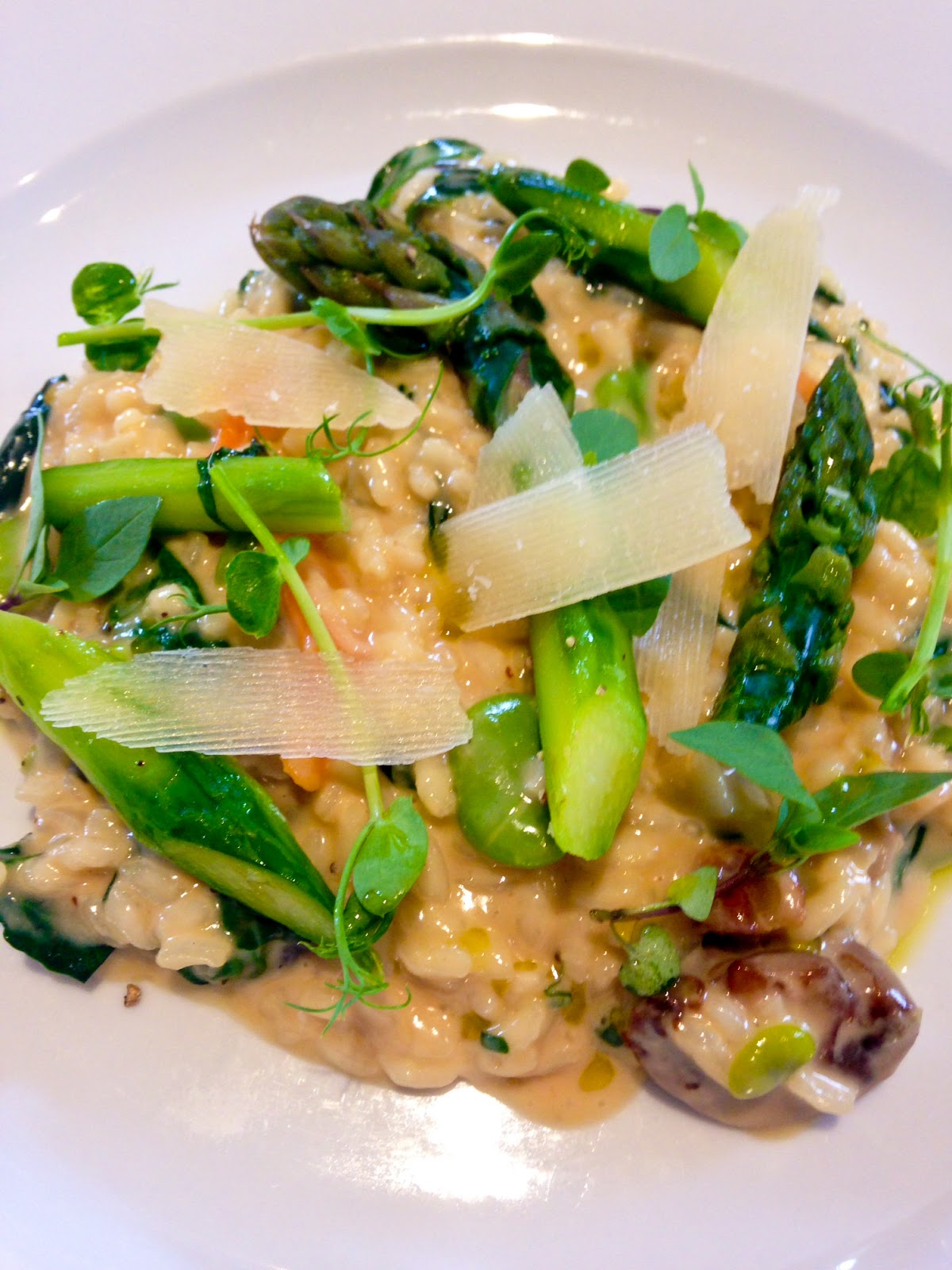 Feeling giddy after the fantastic food we'd eaten up to this point, three of the four of us decided to get involved in some dessert. I should say that although the desserts were really good, we felt they were the least exciting dishes of the day and I think from what we saw on our visit I'd say the Sam Fox's strength is the savoury stuff. That said I enjoyed my Coconut Pannacotta with Raspberries very much. I didn't love it as much as other courses I'd had but was very nice and creamy and the coconut flavour was quite subtle making way for a nice whack of vanilla, which I liked. A nice springtime dessert. 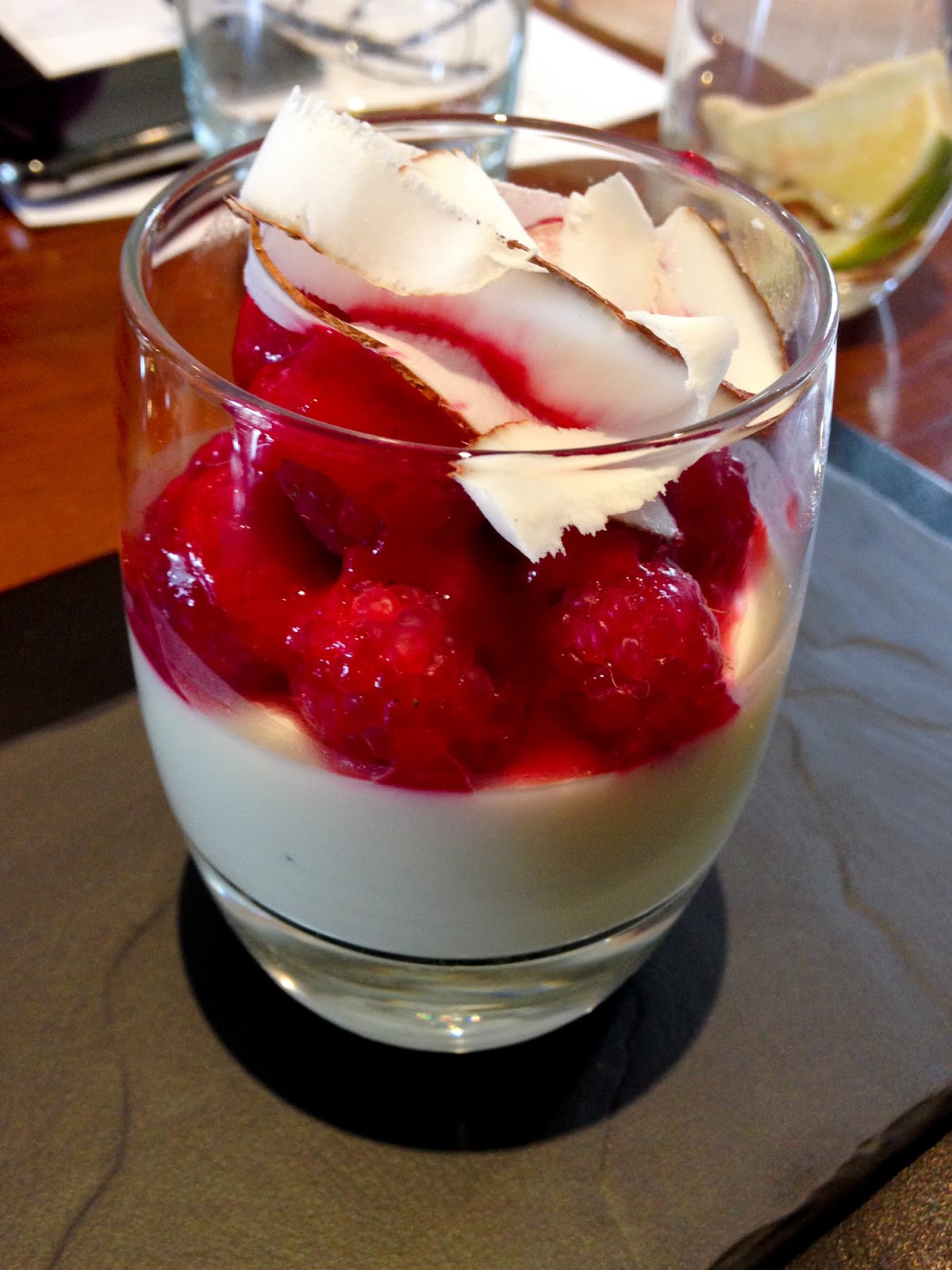 Bailey was a bit disappointed with his Sticky Toffee Pudding with Stout Ice Cream as it wasn't very sticky or um, toffee-y. We liked the way the dish tasted very "Northern" and had a sort of bitterness to it like Bonfire Toffee but thought they could have stouted up the ice cream a notch. 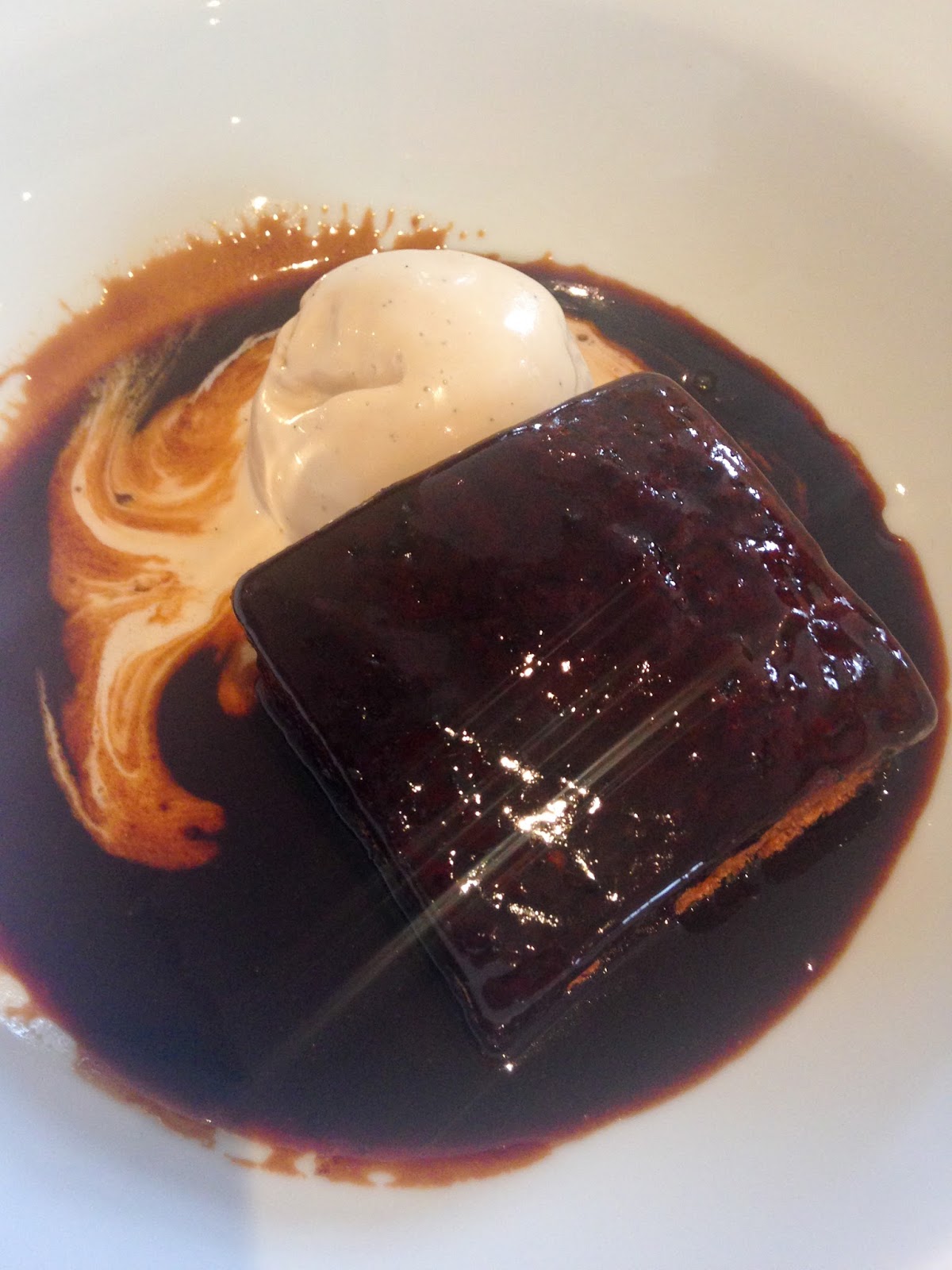 My dad's Hot Chocolate Pudding with White Chocolate Ice Cream was definitely the desert of the day... 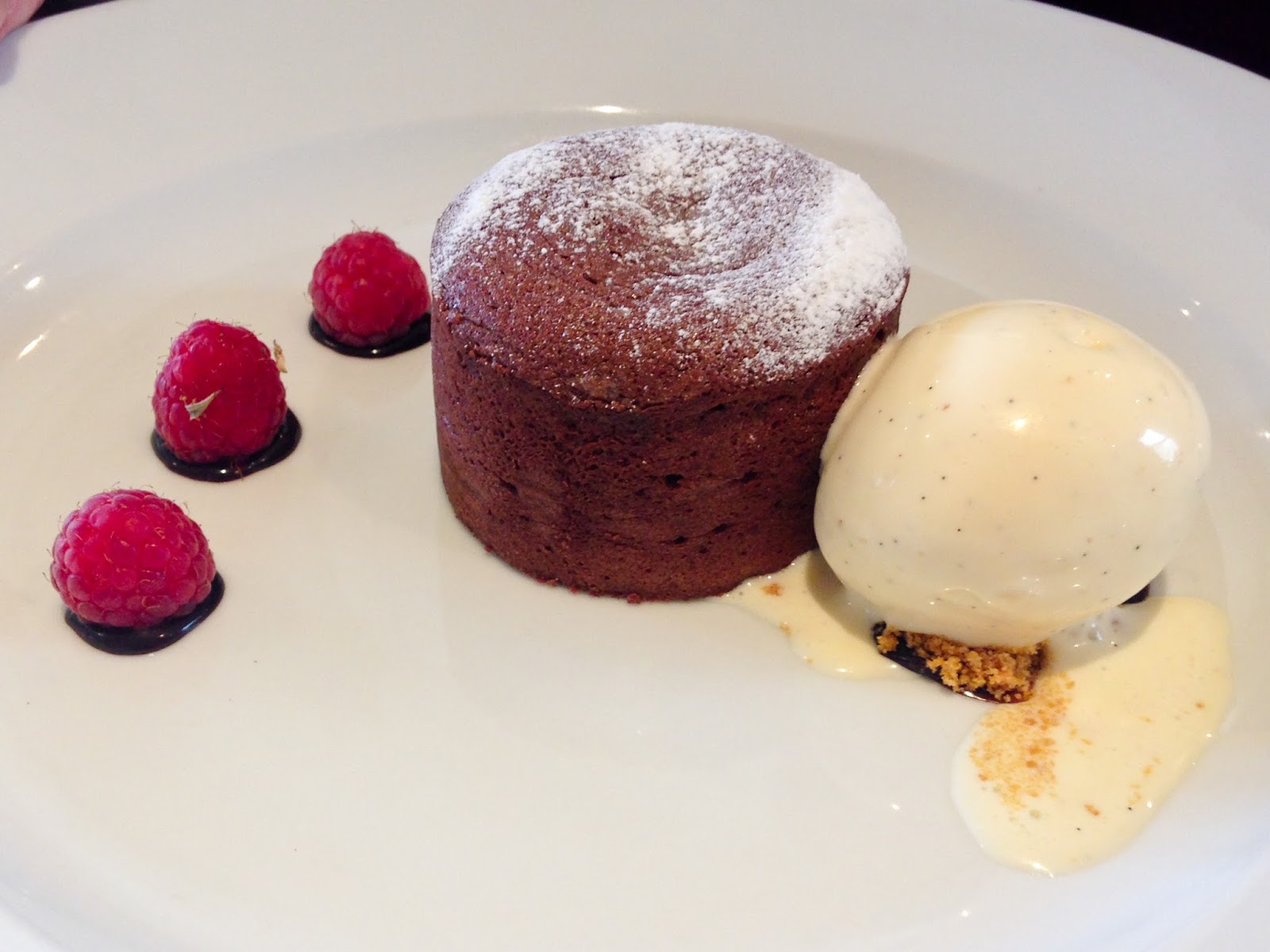 I can't actually remember what my dad said about it but I remember that he loved it and I guess this picture probably says it all:

A delightful meal at Sam Fox Inn and there were other things we really liked about it including the picturesque location, the relaxed atmosphere and most of all the very friendly and down to earth service. Our waitress was so nice and once my dad got talking to her about which is the best well dressing (what's a well dressing? That's what I said - see the Wiki entry on it) in Derbyshire I thought they'd never stop. The décor of the place was fine but apparently just a few days after we were there they refurbished, so a bit of a shame we didn't get to see the new look pub. Oh well, an excuse to return! If you're passing through the Peak District or don't mind a bit of a drive out of Manchester or MAYBE if you can't resist checking out the WELL DRESSINGS (Bradwell's is August 3rd. Apparently the Sam Fox's rooms get booked up really far in advance - you've been warned), you should pay them a little visit! 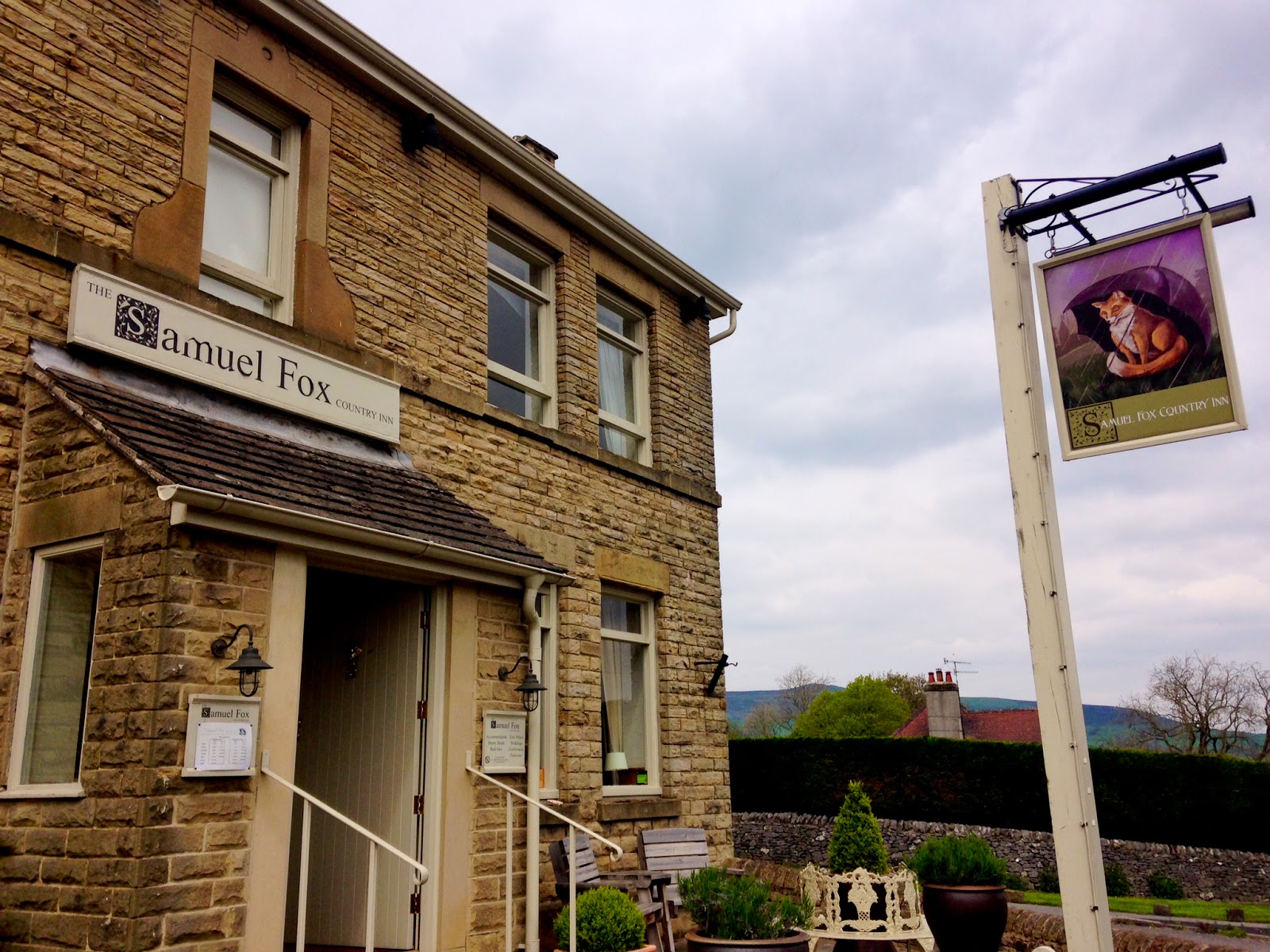 Posted by Jules at 3:11 PM
Email ThisBlogThis!Share to TwitterShare to FacebookShare to Pinterest