One of the many geeky topics Bailey and I enjoy discussing is the age-old 'service vs food' debate. Can a restuarant's bad food be redeemed by excellent service? And can bad service ruin a meal even when there's excellent food? We've always concluded that service is more important than you'd think - while we're obviously all about good food, if the staff seem to give a shit we're far more forgiving of a bad plate or two. Similarly, great food is not enough to make us return to a place where the staff clearly don't care or are rude. After all, it's the overall experience that's key. 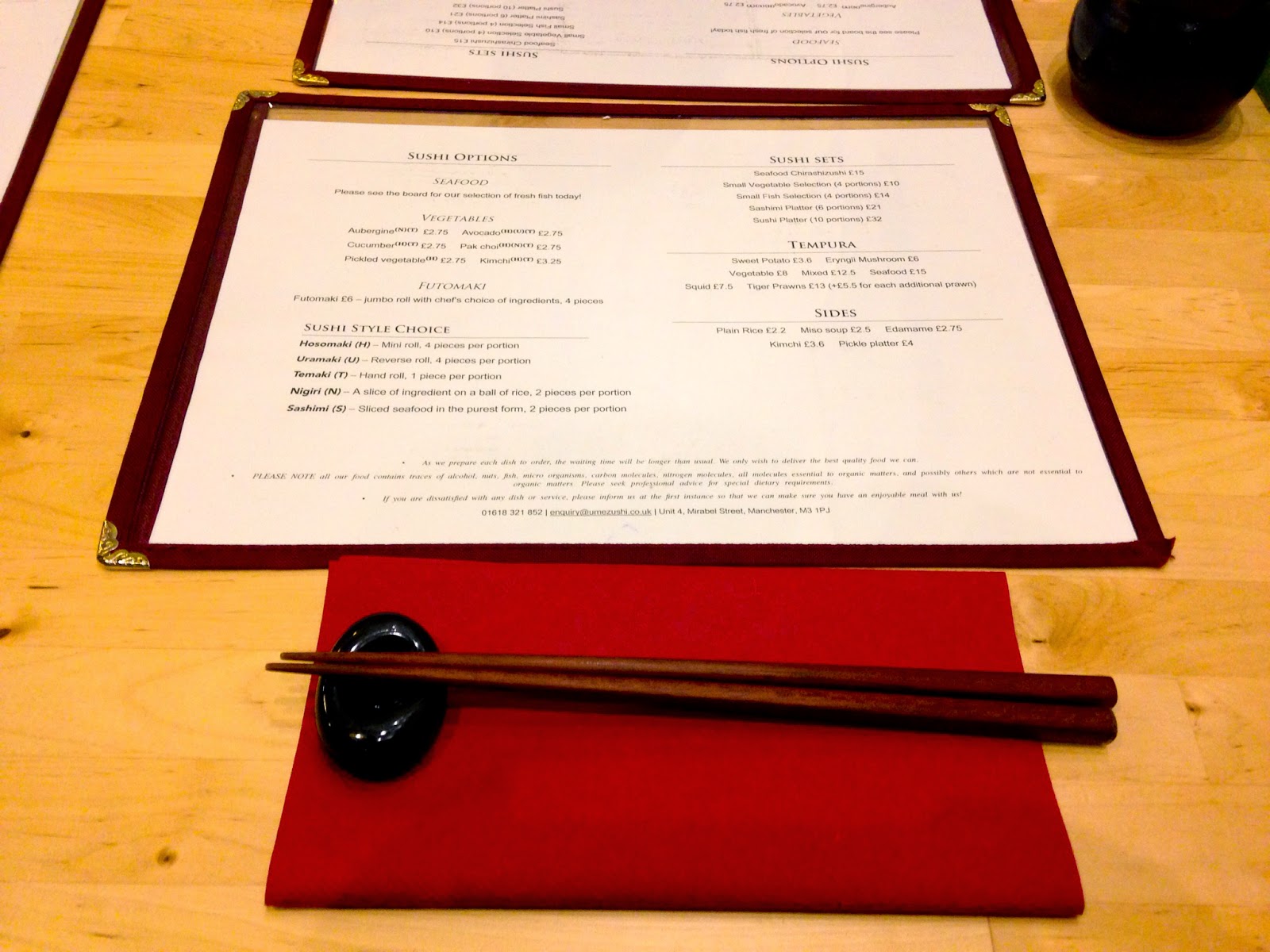 With that in mind, our much anticipated first trip to Umezushi could potentially have put us off for good! We went down on a week night with our Japanese food-loving friends the Doyles and were less than impressed with the service. While our waitress was perfectly polite and friendly, service was at times slow and disorganised with long waits between the arrival of dishes, items missed off our order and a large portion of the meal spent by the Doyles watching us eat our food while waiting for theirs to arrive.

That said, we were very impressed with the quality of the food we sampled that day. Tempura was great, with a perfectly light and crisp batter and a dipping sauce so good we kept hold of it to eat with the rest of our meal. I loved the cheeky little deep fried leaf, whatever it was! 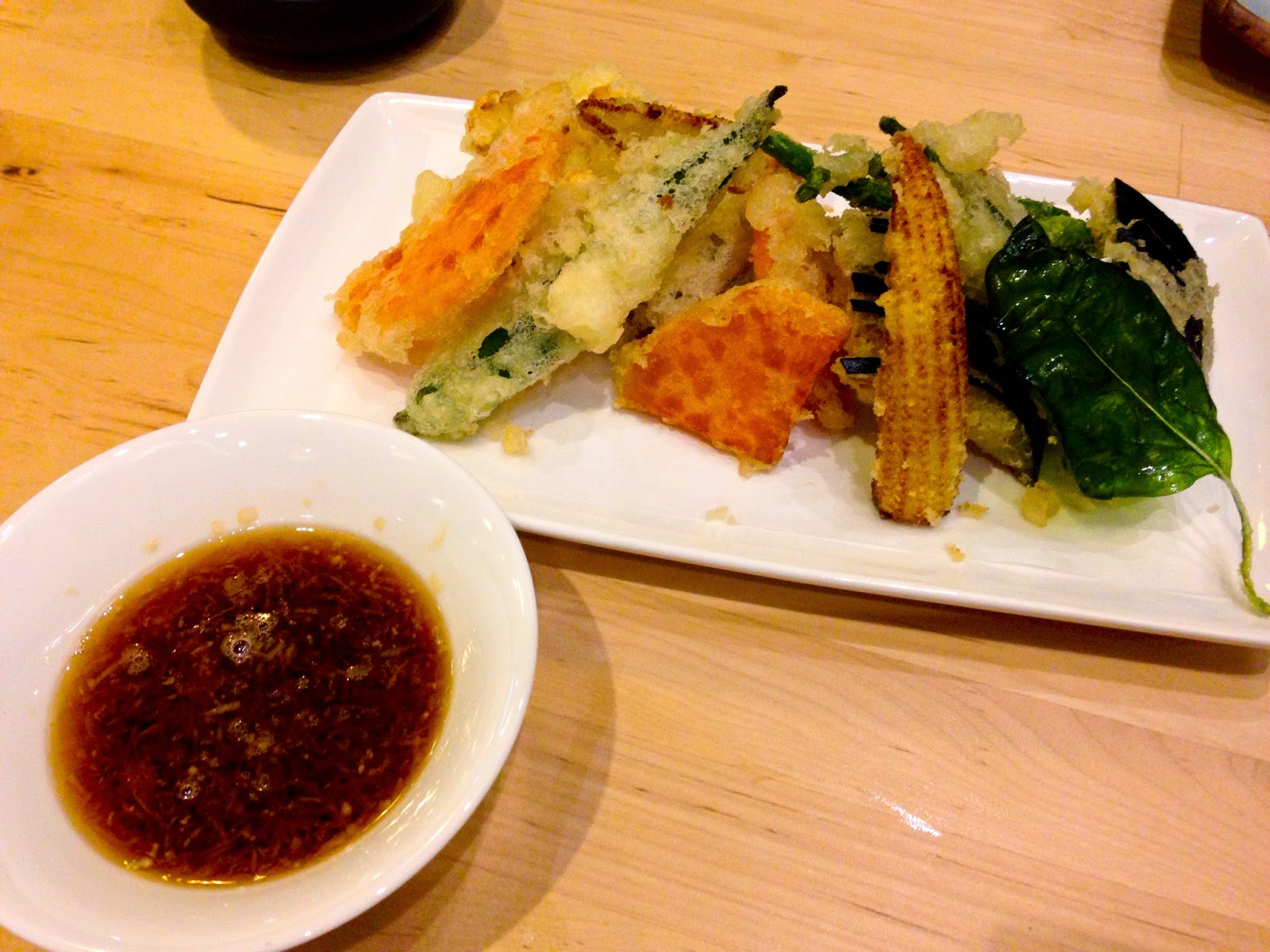 Miso soup was tasty and quite fishy with big chunks of salmon in, but I personally didn't like it quite as much as the one you get in Yuzu. 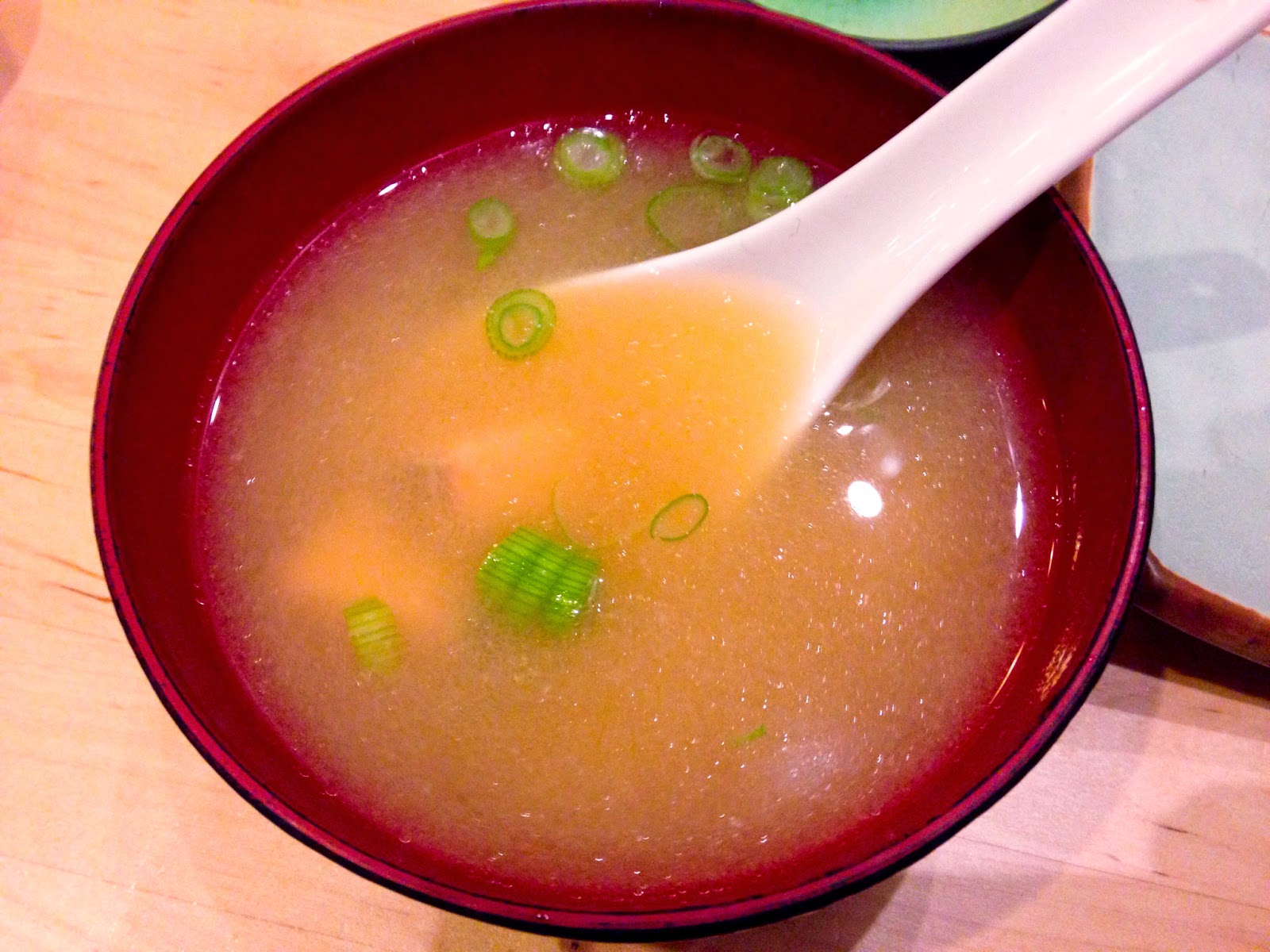 As it was our first visit and we didn't know what to expect with the menu, Bailey and I went perhaps rather unadventurously for an Individual Selection of veggie and fish sushi. Although for greedy pigs like us, this was gone in a flash, this was by far the best sushi we've had in Manchester. While it's probably pricier than places like Yo! Sushi, you can taste the quality of the ingredients, which the peeps at Umezushi take great pride in - sourcing only the freshest and highest quality fish from Manchester's best suppliers. Also, I know it may seem like a little thing, but the wasabi was bloody gorgeous.

Was the food good enough for us to forgive the service issues? We weren't so sure at this point if we'd be rushing back. During our post-meal discussion, one thing Bailey and I did ponder was whether we'd been a bit boring with our menu selections - with the only slightly 'unusual' thing we'd chosen being the deliciously sticky Taiwanese Pork Rice. We hadn't even followed Food Geek's advice of ordering the Unagi! We decided that if we were to we return we'd treat ourselves to the full on Taster Menu. 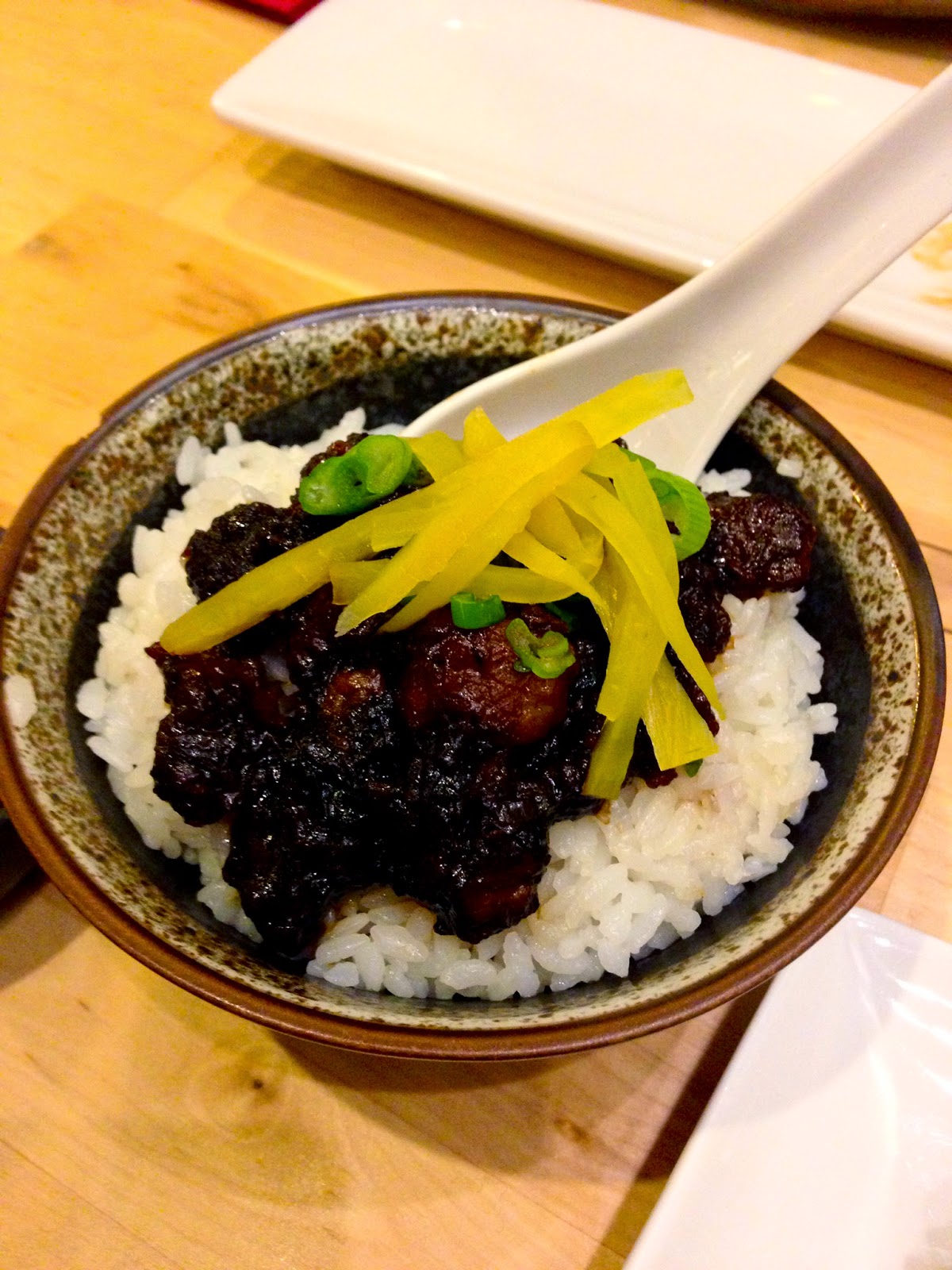 Well fortunately we were given the opportunity to return to Umezushi just one week later as our friend and Yelp honcho Jonny was putting on an evening of sake tasting, Japanese food and origami (yes, origami! Cool non?). 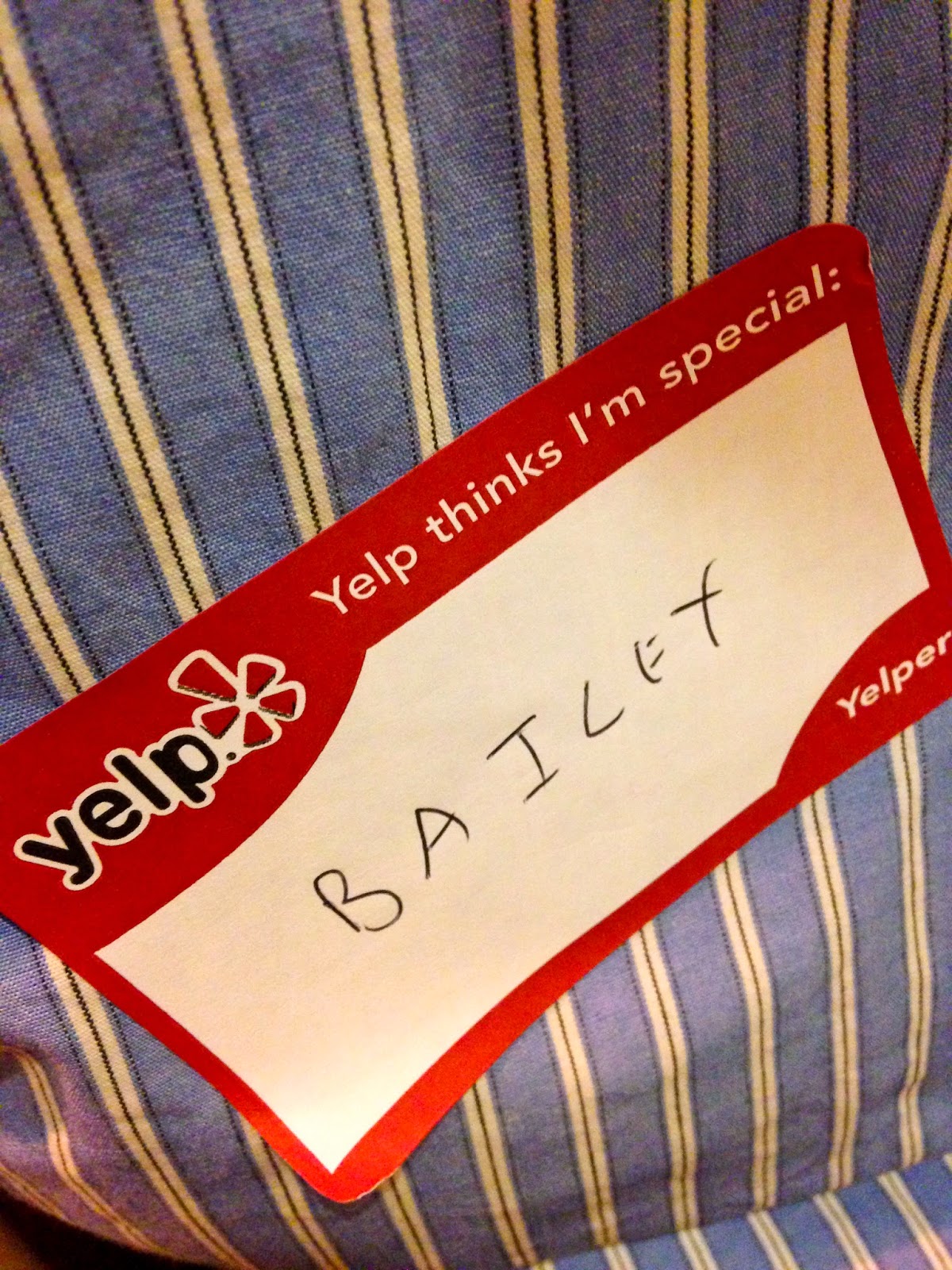 This was the evening that we fell in love not only with Yelping but also with Umezushi. We're so pleased we went as there was no chance of us being boring this time - we just ate and drank what we were given... and what we were given was goooooood! 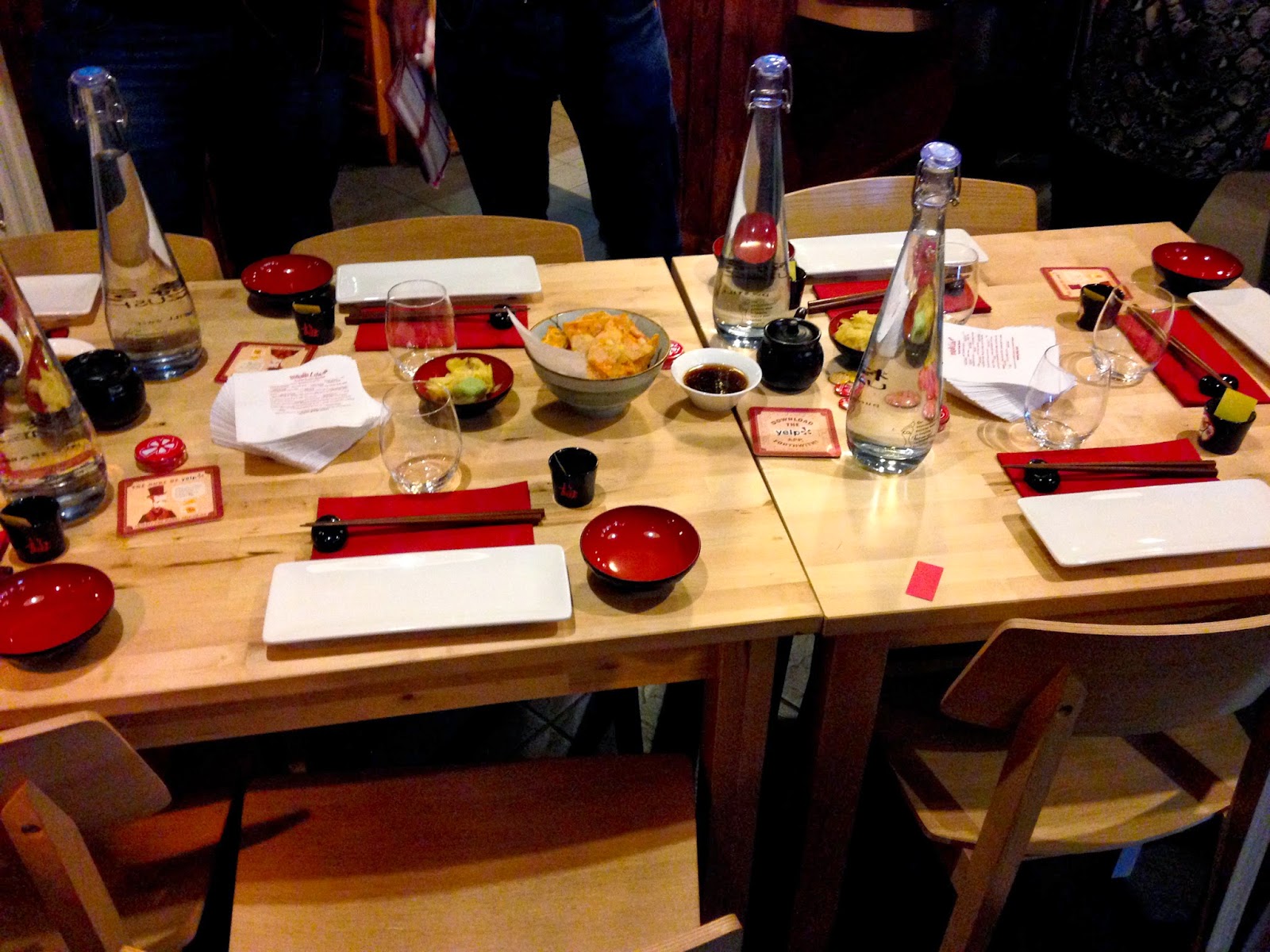 By far my favourite dish of the night and something I definitely wouldn't have liked the sound of on the menu was Tempura Nori. This was AMAZING. The tempura batter, while just as light as the week before, tasted a bit like wasabi peas. Probably my favourite Japanese dish I've ever eaten!

The sushi was great again, and this time I got to try the Unagi which was definitely the tastiest and yet another excellent tip from Mr Food Geek! 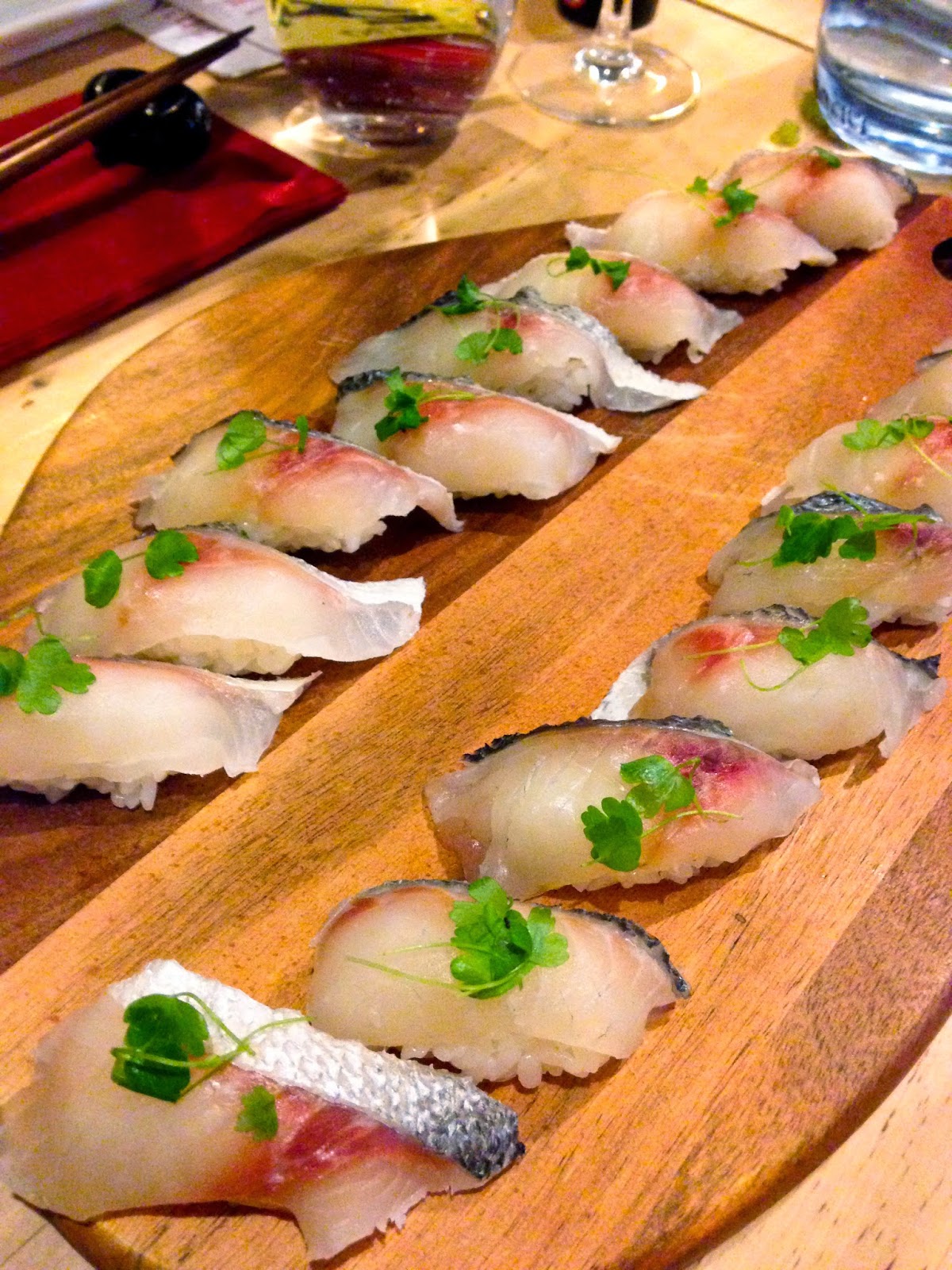 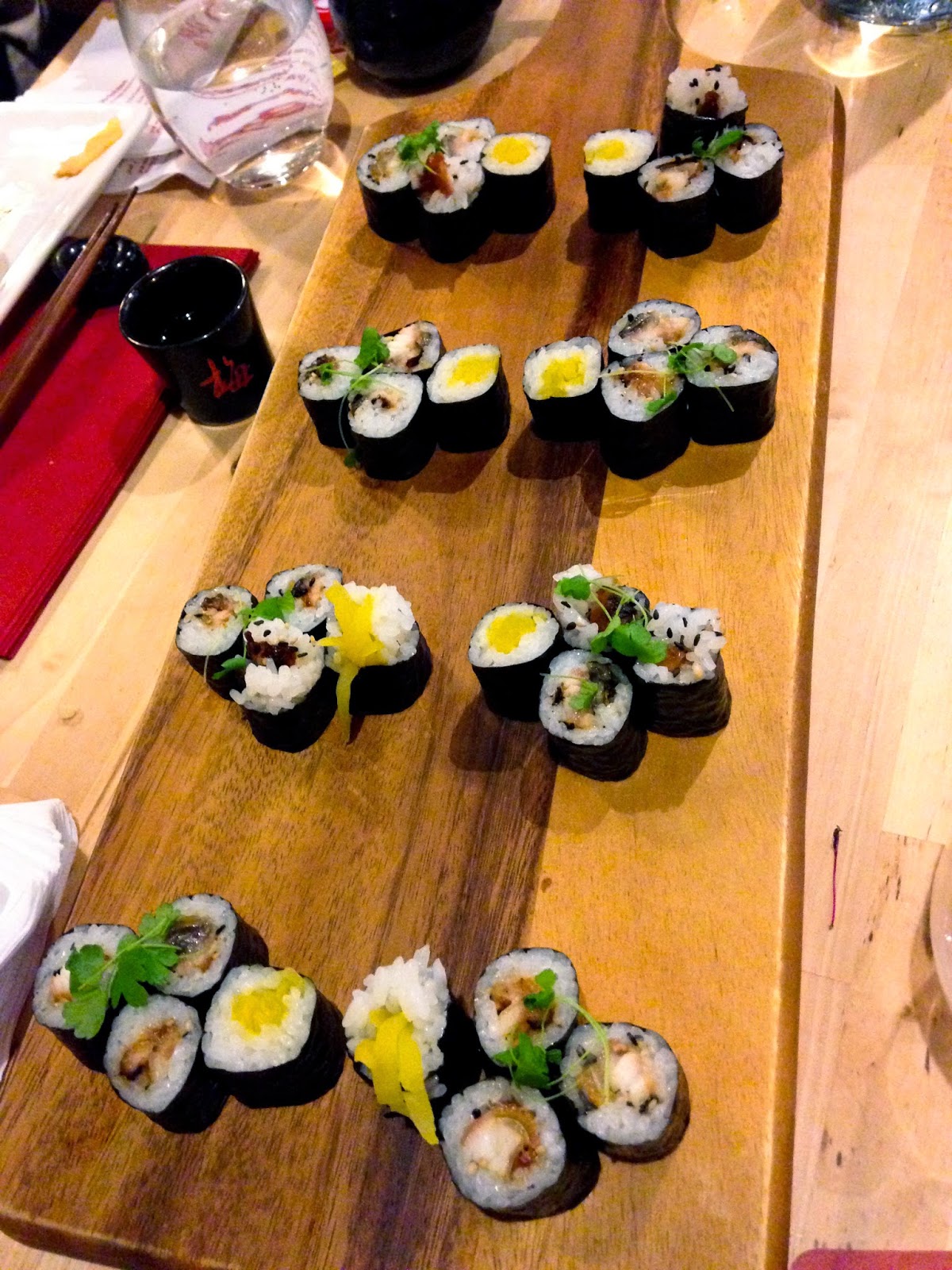 Another favourite was the Octopus Salad which was an absolutely intriguing dish, managing to be fresh and light while packed full of exciting flavours. 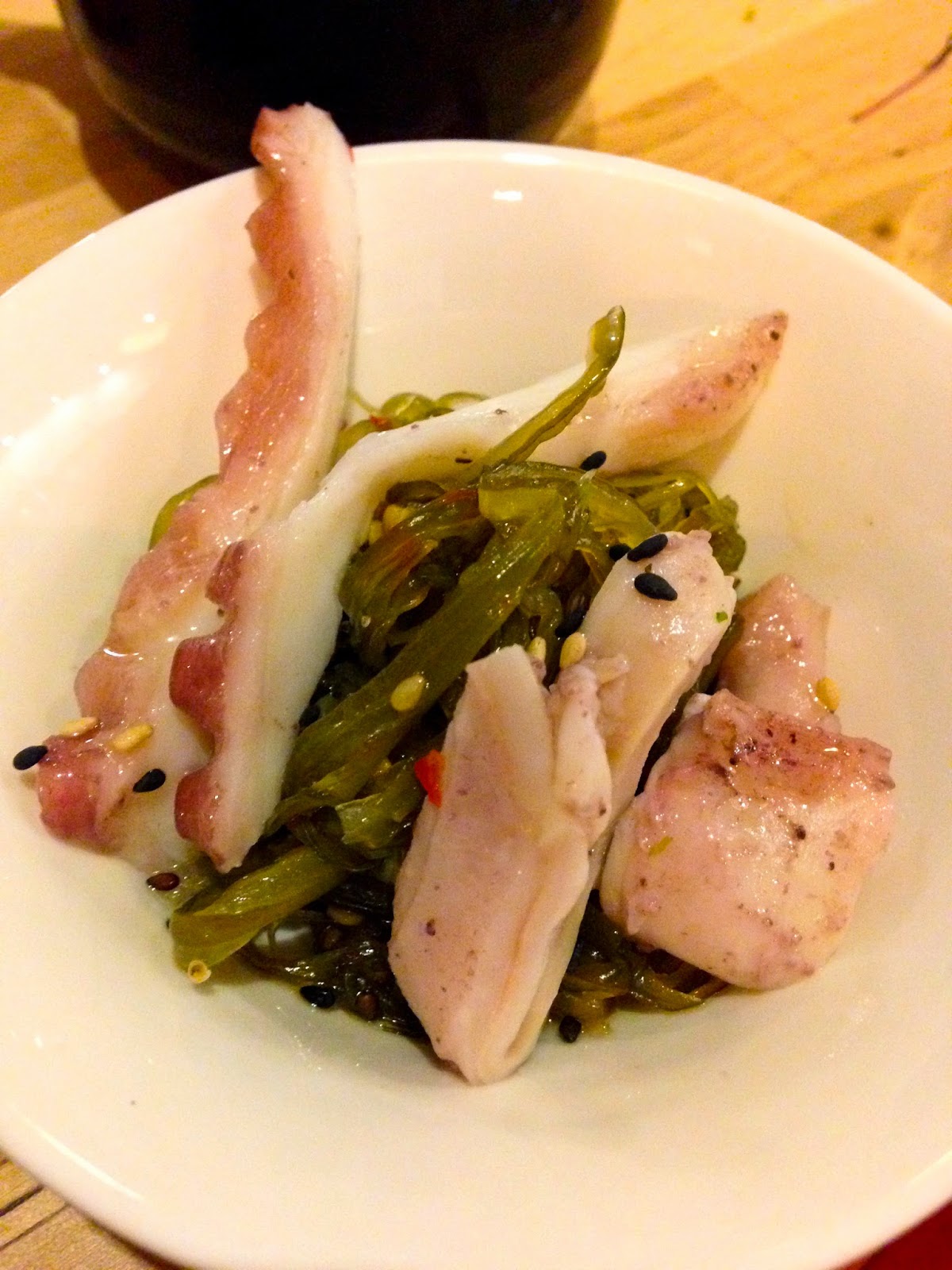 Even the dessert was good - while it's probably fairly difficult to balls up a chocolate fondant, this one was so good myself and lovely Yelper Beck who was sitting next to me couldn't resist scraping the plate clean at the end.

As it was a school night I was disappointed to be missing out on the Sake tasting but Bailey reassured me every glass was delicious and judging by the oohs and ahhs around the table everyone else seemed to agree. I needn't have worried as fortune smiled on me later in the evening when I won a bottle in the raffle! 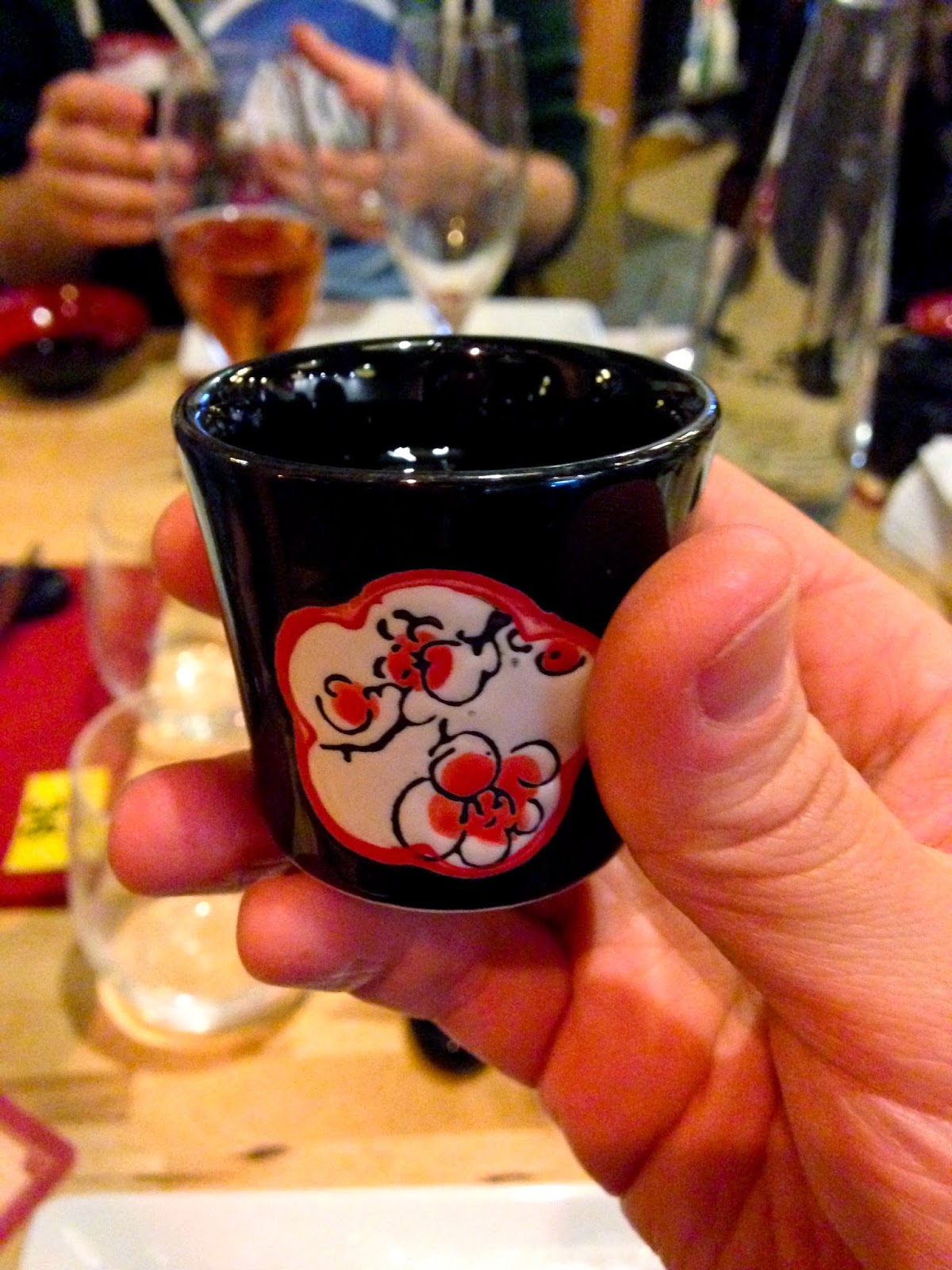 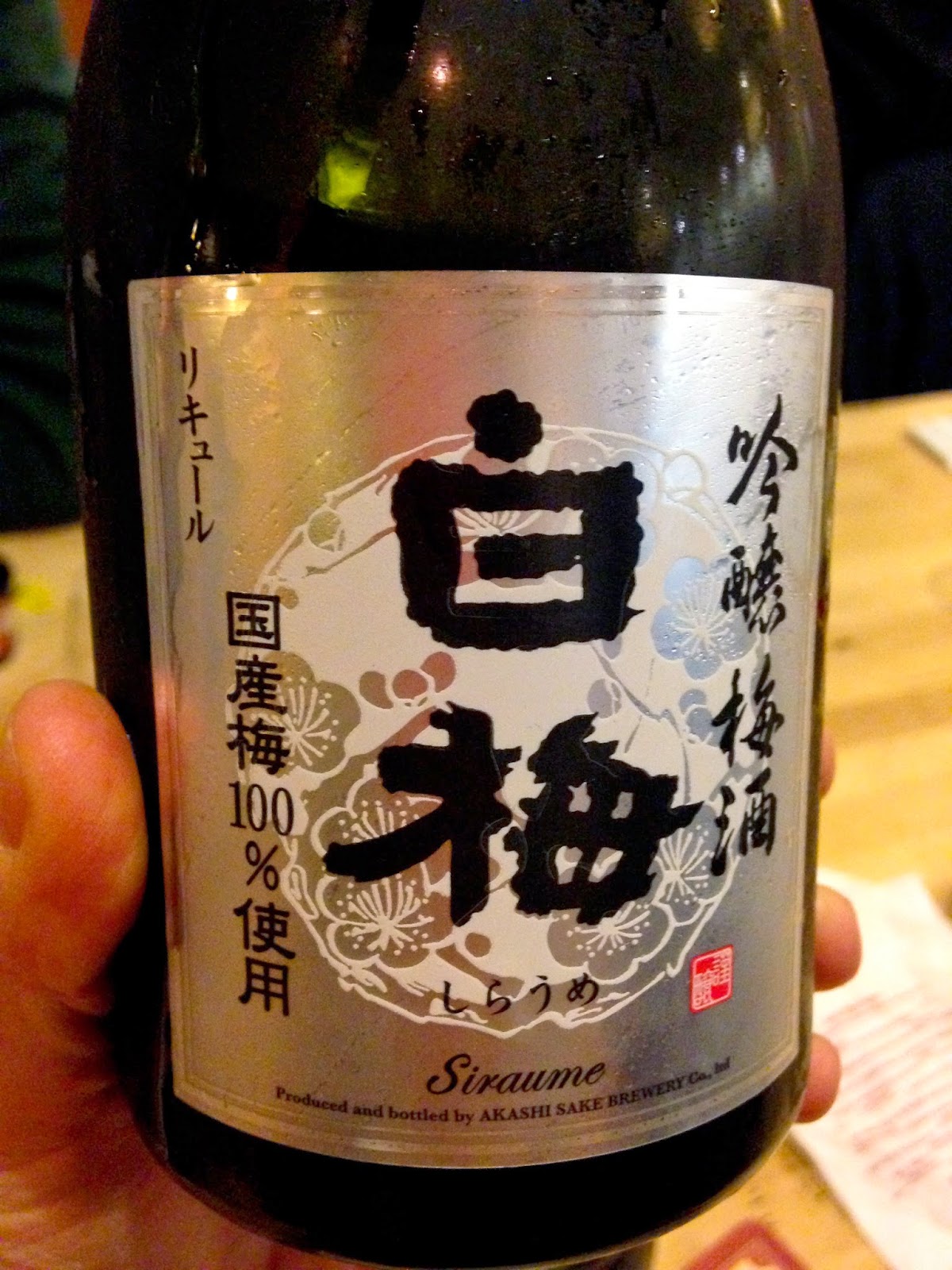 So, what can we say, Bailey and I were very happy to have been proved wrong this time - not only would we say Umezushi has turned out to be our favourite Japanese restaurant in Manchester, but it turns out that the staff DO give a shit about food AND service. From our first visit we'd never have guessed that head chef Terry was an expert on sake and that he is one of the most lovely restaurant peeps in our city (we had the pleasure of having a fabulous chinwag with him at last week's @beatstreet Friday Food Fight. Their sushi rolls were predictably delightful). We're SO glad we got to visit again and would recommend that when you do, you ask for some recommendations and try some unusual stuff and don't be boring like us. Oh, and we also think you should join Yelp, as Jonny and co. are truly passionate about good food, great company and supporting local independent businesses like Umezushi! You can see my profile here...

PS- Dear Jay Raynor, we only paid for the first visit to Umezushi, Yelp picked up the tab for the second one so this is a 50% biased review :)

Posted by Jules at 1:26 PM
Email ThisBlogThis!Share to TwitterShare to FacebookShare to Pinterest