Um, so this is a bit weird, I have been so silly busy lately that I haven't blogged or even really tweeted anything in AGES and here I am posting about a meal we went for in Crete during our summer holidays way back in August. I considered just forgetting about this one but it really was such a good meal (Bailey and I were saying one of our favourite nights out of the summer, if not the year) that I wanted to write a quick post about it. 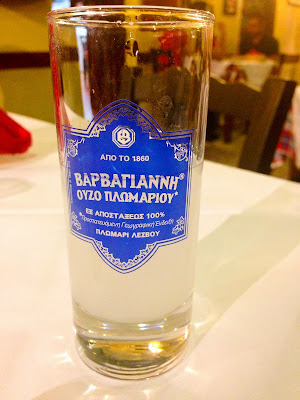 It was our last night in Chania and after such an amazing holiday, we were hoping our last meal at local favourite Tavern Strata would be one to remember. It was the superb location down a charming little alleyway that first attracted to the place, as well as the atmosphere of fun tangible in the air as you walked past.  It started off well/badly depending on your opinion of the beverage Ouzo as we were presented with a complimentary glass. I'm not a huge fan of the stuff but it did set the mood for the evening of good times at the hands of generous hosts and super fun staff. We followed this up with some of Strata's home made rosé wine which was delightful. Next up a huge basket of bread, some delicious teeny olives and the most amazing home made garlic butter. 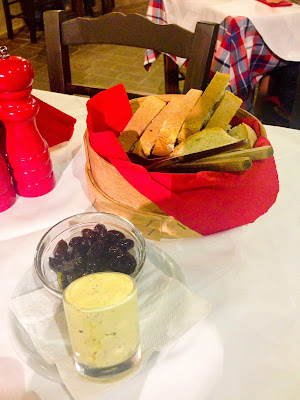 We'd also ordered some Dolmathes (the best we'd had all holiday), Tzatziki (the best we'd had ever) and some courgette fritters (very good). The portions were absolutely huge and because everything was so tasty and we are so greedy we couldn't help but dispatch the lot. 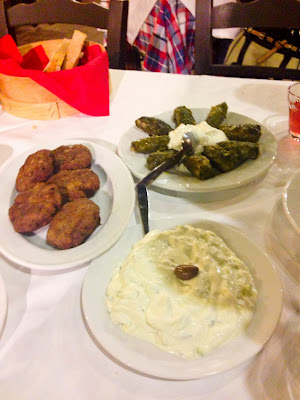 This didn't bode well as we'd both also ordered massive main courses. Mine was the Boureki - a carbtastic Cretan specialty of courgettes, mint, potatoes, Cretan cheeses and super delicious pastry a bit like filo but slightly thicker. Again this was by far the best boureki I'd had all holiday and I am pretty glum that I will most likely have to fly all the way back to Chania to taste anything like it again. 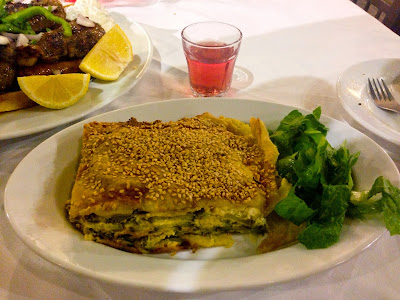 Bailey was in an even worse pickle, having ordered the Mixed Grill. This consisted of every type of meat imaginable served on a ridiculous platter with some really good rustic chips, again, the best chips of the holiday. 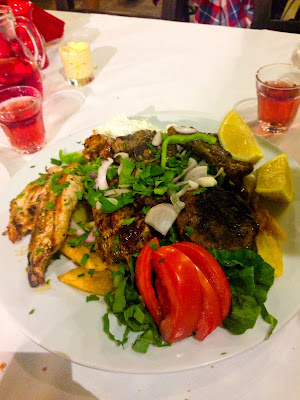 This was too much meat for one man whose belly was already full of delicious starters to contend with but Bailey gave it a good go. He was helped out by a few friendly local cats that, to our excitement, joined us at the dinner table but he was still unable to put it all away despite it all being very nice and well cooked. This led to a light ribbing from the joker waiters of course.

Just when we thought we were safe to waddle back to the hotel, the waiters only went and brought over a portion of watermelon and some more complimentary beverages - Raki this time. If you've read any of our other Chania posts, you will know that pretty much every restaurant will give you a little bottle of raki and it's apparently quite impolite to refuse to drink it. However the waiters at Strata took it to the next level, telling us they were going to refuse to bring us the bill until we'd drunk every last drop. They then proceeded to fill our bottle back up to the brim and say they wouldn't bring us the change until we'd had that as well. Grr. Fortunately, the owner walked past and, unaware of the gag, brought us the change. Phew. 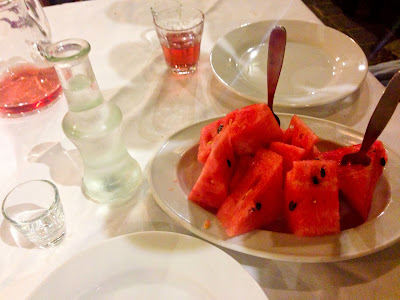 We absolutely loved our visit to Tavern Strata hence the reason I am raving about it two months later. I still dream of their mega thick and creamy tzatziki and heavenly boureki. Please someone open a Greek restaurant of a similar calibre here in Manchester. And if I don't get free ouzo I'm kicking off.


Posted by Jules at 5:12 PM
Email ThisBlogThis!Share to TwitterShare to FacebookShare to Pinterest