The Cake and Bake Show

Back in September we booked a weekend away in London with our friends Doyle and Jeni. The main purpose of this visit was to go to the Cake and Bake Show at Earl's Court. 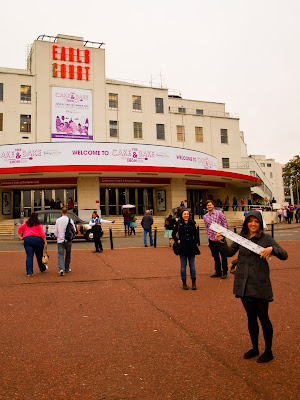 As you can imagine, we had been pretty much 100% pumped about this bad boy event from the moment we had booked it months beforehand. I was thinking, surely this was going to be like my favourite foodie day out, North West Food Lovers' Fest, only loads better. YES. 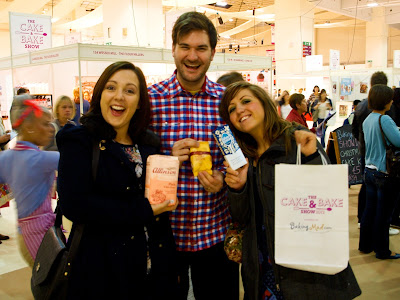 The day started off brilliantly, as does any day on which you eat cake for breakfast. There was a pretty rad queuing system to get to the main entrance whereby you had to walk around these weird underground passages for ages, it sort of reminded me of waiting to go on a rollercoaster.  The second awesome thing was that more or less the first thing I laid eyes on as I walked through the door was none other than Mary Berry herself, in the flesh standing around with no one around her. I played it cool and just stood at an angle where I could gawp at her without her noticing. 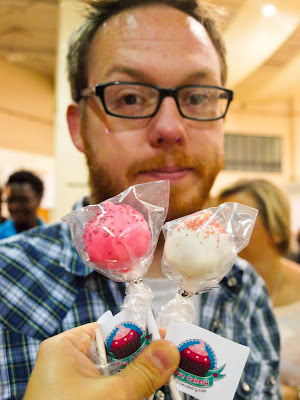 The third awesome thing was that the very first thing that hit my mouth that day was an absolutely spectacular Red Velvet Cake Pop from Love Cakery. These were so good that I immediately walked back and ordered myself a strawberry one. 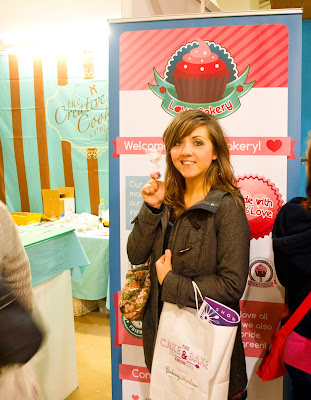 We also caught a little glimpse of the silver fox Paul Hollywood who was in the middle of judging a children's cake competition. 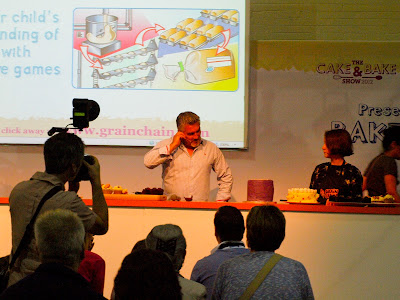 This was pretty cool as after Paul had gone everyone left and we could go up and taste the cakes the kids had made. I couldn't believe the standard of these and instantly went into teacher mode probing a 12 year old girl who had made a fantastic lemon curd and raspberry cake with loads of questions about her baking and whether or not she was "the best baker in her school". 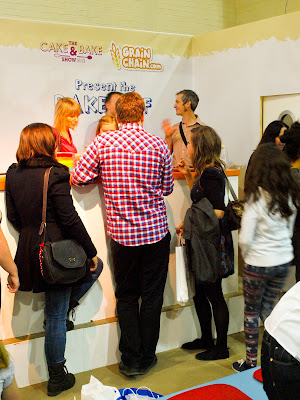 So far, so good... Unfortunately the day started to go rather downhill from there. We continued to walk around, excited at what other delights we might find at the show only to discover that we had already seen most of what there was to see and that a lot of the huge venue was closed off. As it was quite a small event in terms of space, once the crowds started turning up, The Cake and Bake Show started to be quite an unpleasant place to be - there simply wasn't enough space or enough stuff going on for the number of tickets they had sold. 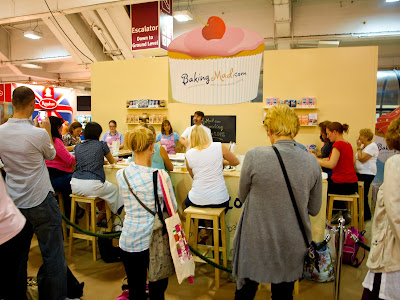 Although, as anyone who knows me will be well aware, I adore cake - I will readily admit it is quite easy to get caked out. Anyone who has ever been to a Clandestine Cake Club meeting will know that once this happens it is pretty difficult to get back into the cakey mood for at least a week or so. Therefore we started getting a bit annoyed that everywhere we looked was cake, cake and more cake. Not even that many different types of cake. It was mostly just cupcakes. Yes, I know we had gone to the CAKE and Bake Show well aware that there would be tonnes of cake, but we were finding it quite difficult to find much of the "bake" side of things. 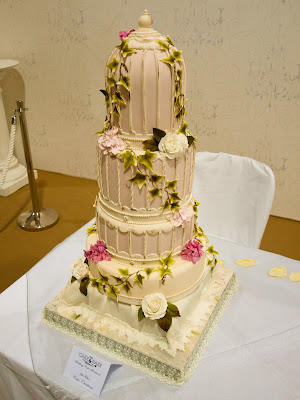 The sighting of a solitary bakery stall was therefore a very welcome sight. We ploughed our way in through the huge swarms of people waiting to buy a newspaper just because it came with a free tote bag, and Bailey managed to get his mitts on the very last savoury pastry treat they were selling. 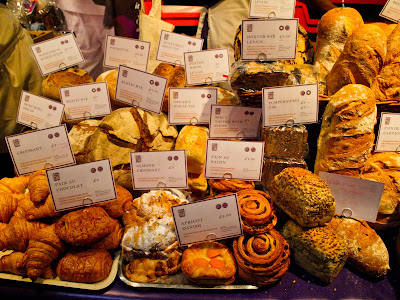 This didn't bode too well considering it was only about half past 10 in the morning and not anywhere near lunchtime - we were definitely going to need more savoury options than this. 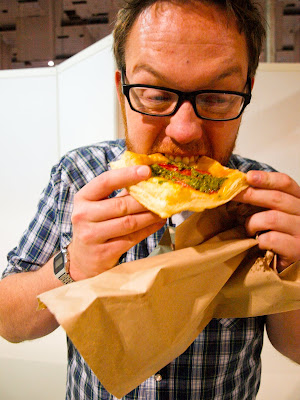 At this point we decided to go and have a sit down and get ourselves ready for one of the many demonstrations we were planning to watch that day, starting with Sourdough. Fabulous. So imagine our surprise and disappointment to be greeted at the door of the workshop by a bouncer telling us we had to buy tickets! Whaaaaat?! Call us naive but we totally had had no idea that the classes were going to cost extra. Perhaps this was made clear somewhere on the website but we had missed it, maybe I just assumed that the classes would be included in the ticket price given that at North West Food Lovers' Fest we had watched Simon Rimmer cook up a storm without having to cough up any extra. We found ourselves a spot on the floor next to the classroom and tried to listen in but we couldn't really hear anything and it was a bit rubbish. Having said that I later saw people on Twitter complaining about having had to pay extra when freeloaders like us could just sit next to the classroom for free. Fair point also. 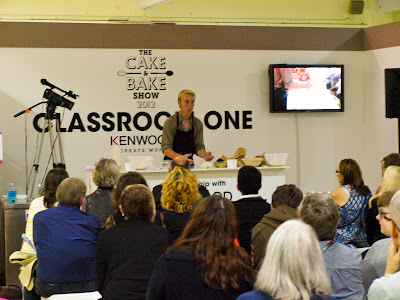 Annoyed at not being able to hear anything about sourdough, we had another little walk round where we were surprised to see that Betty Crocker were putting on a baking class in which people were being shown how to make Betty Crocker cakes... out of a box. I am guessing the class went something like this. "Open box. Put mass-manufactured cake mix into bowl. Add water. Put in oven." Is this really what The Cake and Bake Show think Britain's baking craze is about or did Betty make them an offer they couldn't refuse? Unimpressed. 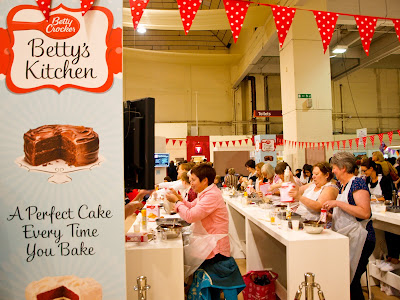 The final straw for us was when, in an attempt to alleviate the caked out feeling, we went off in search of a cuppa. Places selling cuppas were few and far between and the queues to get to them were ridiculous. Below is a picture of one of the queues to show you what I am on about. Ridiculous, non? As someone on Twitter quite rightly said: "It's the Cake and Bake Show, it should be raining tea". 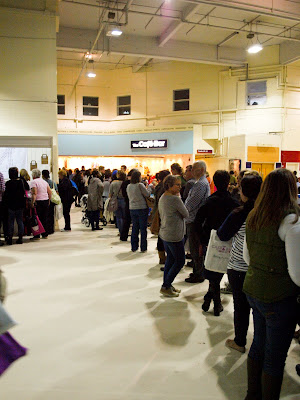 At this point we decided to cut our losses, get the hell out of that place, get on the motorway back to Manchester and stop off at a magical place where you can use the toilet, buy savoury food and not have to windmill to get around - yes, the service station. En route, I started to look on Twitter and found countless disgruntled people with the same complaints about The Cake and Bake Show that we had. What really annoyed me more than anything else was that the team behind the event seemed to be completely burying their heads in the sand about the whole thing - retweeting the positive comments and ignoring the majority of the negative ones - including ours. Save a couple of tweets apologising for there not being enough loos, as far as Twitter was concerned, everything was hunky dory in Cake and Bake land. Not cool. 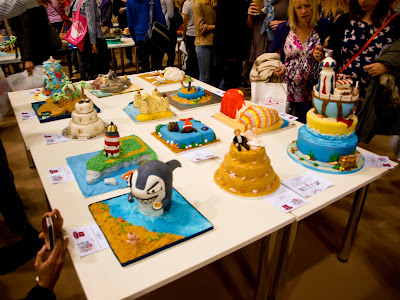 I'm afraid I did not enjoy The Cake and Bake Show. I'm really pleased we'd had such an amazing time in London the day before otherwise I would have been really disappointed that we'd traveled all that way to an overhyped, oversold event when there are much better foodie events going on up north. I know I've been banging on about North West Food Lovers' fest but I have to say we went back there a few weeks later and  found that despite this event not even being baking themed, there were ample more opportunities to purchase bread, pastries and cakes other than cupcakes. I think I will just stick to that in future.

The Cake and Bake Show will be hitting Manchester in April and although they've said that they're trying to prevent a lot of the London event's issues from happening, I would say proceed with caution. As Doyle said "You know there's something wrong when you go to The Cake and Bake Show and the best thing you eat all day is a bit of cake made by a 12 year old girl." 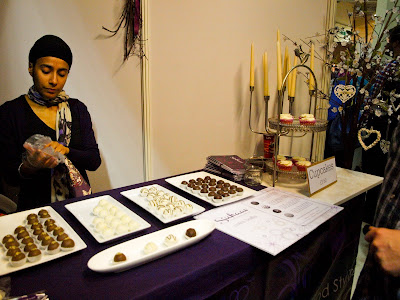 Posted by Jules at 8:40 PM
Email ThisBlogThis!Share to TwitterShare to FacebookShare to Pinterest