On Thursday was my school's Children In Need fundraising day. With loads going on including sporting events and a non-uniform day, I jumped at this chance to organise a cake sale.

A few weeks ago I called a meeting for anyone who would be interested in baking cakes or biscuits for the event and was really pleased with the turnout, and that it wasn't only Year 7s who turned up, we had some older ones too! The kids seemed really excited, with some of them even excitedly phoning their grandmas for recipes during the meeting, which made me pleased that some people still enjoy baking as much as I do. The kids were also really good about helping me publicise the event and stick posters around the school. 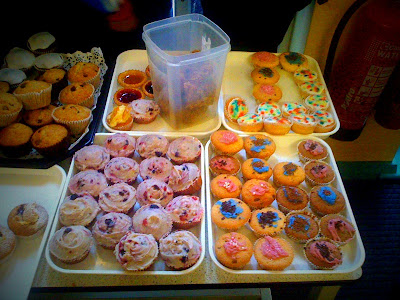 On the day we had loads more cakes, biscuits and tarts than I had expected, which meant we had enough to sell during break and lunchtime! Some of the kids had really put in a great deal of effort, with one girl even making Pudsey Bear shaped biscuits and decorating them with yellow icing (unfortunately these sold so fast I didn't even get a chance to take a photo!) 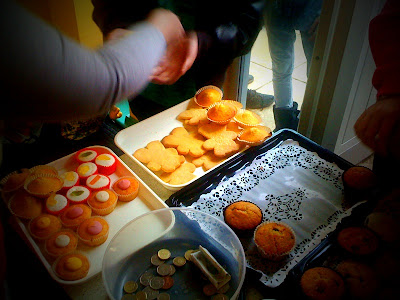 During break time we had queues going out of the building and managed to sell £57 worth of cakes in just 15 minutes! At lunch time we managed to flog the rest of the cakes (partly due to the Apprentice-style last minute price drop we did five minutes before the bell) and our money box was looking jam packed full of cash. I can't wait to find out on Monday what the final total was! 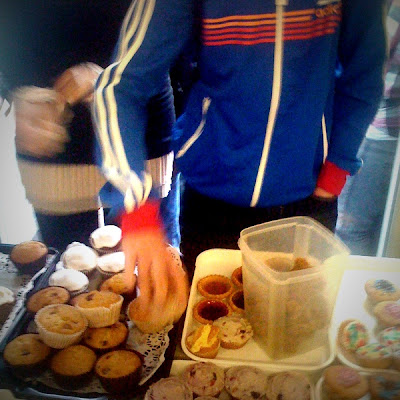 Oh and by the way, the berry cupcakes with white chocolate icing that I made were initially slow to sell as they could not compete with the lovely flourescent, glittery cakes some of the other kids had made and I think mine looked a bit too healthy in comparison. However they started to go pretty fast when two year 10 boys bought one each then returned minutes later with their friends saying "Those were WELL nice!" and bought two more each!

Posted by Jules at 11:18 AM
Email ThisBlogThis!Share to TwitterShare to FacebookShare to Pinterest