Probably our favourite element of our recent Tea Party was the Tigré cakes we made.


The first time we ever had these lovely little cakes was in Paris at our most favourite eatery - Coquelicot in Montmartre where we were staying. It was the most gorgeous bakery and we will never forget how fantastic an experience it was to eat there. One morning after our second fantastic breakfast in a row at Coquelicot, Bailey decided to treat himself to a cake and picked out a Tigré.


After that day it actually took me years to find out what these cakes actually were. Turns out this type of cake is called Financier and this discovery led me to a Gordon Ramsay recipe. They are made using beurre noisette, egg whites and ground almonds. Lovely jubbly!


My next challenge was to be to find the correct mould for the Tigrés as the beauty of Bailey's cakey experience was not only the lovely light fluffy cake but the gorgeous pool of chocolate ganache made possible by the fact that his cake had a dip at the top. I searched the net but couldn't find a reasonably priced one. Fortunately, while on the school trip to France I happened to stroll past the perfect mould while rushing around a hypermarket. Although not particularly the correct shape, there was definitely space for a bit of ganache with this mould!


The Tigrés were so easy to make, probably the easiest thing to make for the whole tea party which is great considering they were probably the yummiest too!


They went down really well at the tea party and I really enjoyed eating them all ladylike with a cake fork on a little vintage plate. Also, when I gave my friend Steve a plate of tea party leftovers for him and his family the next day, he said the Tigrés were his favourite. In fact he was raving about them saying "I loved the way they felt in my mouth". Awesome!


The only problem with my Tigrés were that I think I made the ganache a bit too thick as it set hard rather than remaining a lovely liquidy, gooey pool. I've accounted for this in the recipe below. Happy baking to all you French pastry lovers!

Spray your mould with plenty of cooking spray and preheat the oven to 190 degrees C.


Brown the butter in a pan before putting through a sieve into a container and put to one side to cool. Sift the flour, almonds and sugar into a mixing bowl and combine.


Lightly beat the egg whites until a little frothy (no need for peaks or anything like that) and pour into the mixing bowl with the other ingredients. Stir. 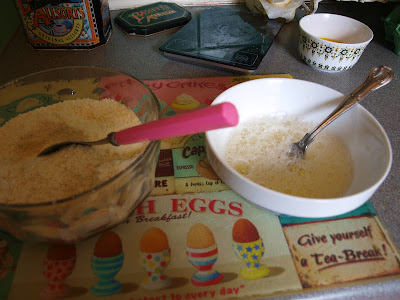 Mix the butter into the batter in the mixing bowl. It should now be smooth, thick and glossy.


Add the chocolate vermicelli to the batter and mix well.


Using a teaspoon, carefully spoon the mixture into the mould and pack down well.


Place in the oven for around 15 minutes or until the tops of the Tigrés are browned.


Pop the Tigrés out of the mould. As the mould we used was silicon, the tops of the cakes weren't quite browned, so add them to an oven tray and put back into the oven for around 5 minutes until brown all over. Take out of the oven and leave to cool.


Meanwhile, make up the chocolate ganache. Heat the cream in a small saucepan over a low heat until the cream is hot - be careful not to burn. Then, add the chocolate in small chunks and stir well until all the chocolate has melted. Leave to cool a little before adding the ganache to a piping bag.


Carefully pipe the ganache into the hole on the top of the Tigrés.

Leave the Tigrés in the fridge to cool before arranging on a most lovely three-tiered cake stand or vintage serving dish for maximum effect. Then serve!

Posted by Jules at 8:52 AM
Email ThisBlogThis!Share to TwitterShare to FacebookShare to Pinterest