What a joyous occasion it was to be invited to the classiest of hen parties to celebrate the forthcoming marriage of the gorgeous Dani to Iain. I was doubly overjoyed to hear that the plan was to go for a fancy three-course meal at Harvey Nichols Second Floor Brasserie followed by some Tiger Tiger karaoke shenanigans. 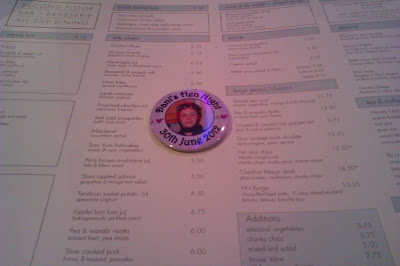 I had never actually been to Harvey Nicks before, not even to look at things I can't afford then leave. So I was very excited and there was a lot of oohing and ahhing on arrival, particularly when I set foot in the lift which was full of little round mirrors. 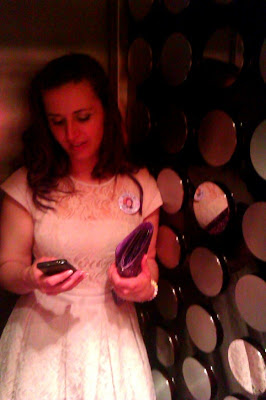 As usual I'd had a good neb at the menu in advance and had already decided what I was going to eat. The Brasserie does an absolutely fantastic deal which is three courses for £20 with the option of adding a 500ml carafe of wine for a fiver between two people. Very reasonable indeed. 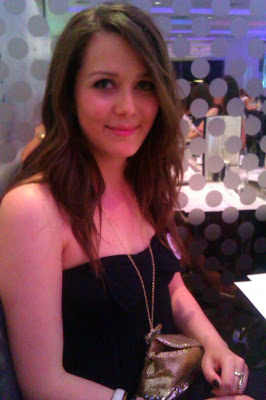 I sat next to the beautful Heather who was an excellent 'date' for the evening! We were a really large party - there were 30 of us in total so we'd been split into two tables. Before we'd had barely a moment to study the menu, a mystery card was brought over to Dani and we were all presented with a lovely crisp glass of Prosecco! 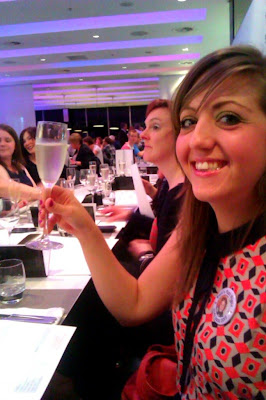 Turns out this was a surprise from Iain - what a super fiancé he is! We were all very pleased and enjoyed clinking our glasses after Dani's speech and toast. 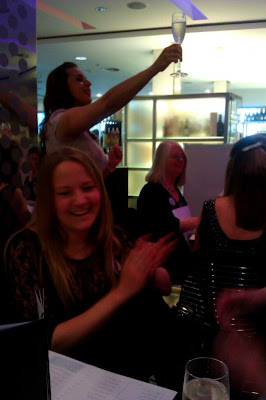 We couldn't believe our luck when our starters arrived in what seemed like no time at all after we'd ordered them. They all looked very appetising and very decent portions too. Heather had gone for the Tom Yum Fishcakes which she said were nice but her and other diners agreed that they were a bit "too dense and fishy". 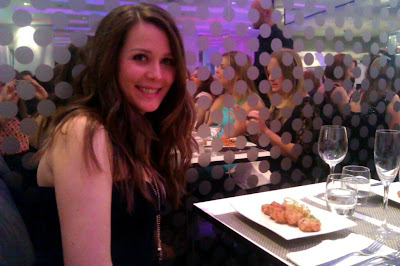 My starter was the Mackerel with Cucumber Achar. Honestly this starter was an absolute delight. I enjoyed every single mouthful of beautiful smoked mackerel, crunchy pickled cucumber and creamy dressing with the occasional hit of cumin. I really couldn't fault it - this was a definite winner. 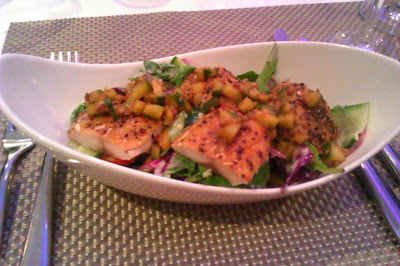 Once again mains flew out of the kitchen much quicker than expected and Heather had chosen the Slow Cooked Lamb Shoulder which came with a quinoa salad. Apart from the obvious lamb, this dish looked right up my street. Heather very much enjoyed the tender meat but struggled to finish her dish due to being - get this - full! 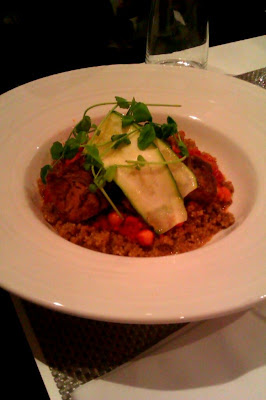 I'd decided to go for the Seared Sea Trout which came with a nice big pile of roasted artichokes, some peas and cherry tomatoes. This was pretty good - the fish was delicious - soft, moist and perfectly cooked (although the skin was a bit soggy) and the tomatoes were juicy and sweet but I felt the dish overall was lacking something to give it a bit more oomph - maybe a different texture would have made it a bit better - some crispy skin on the fish would have been great! It was lovely with my nice glass of white wine though and I liked the way I felt quite healthy eating it. 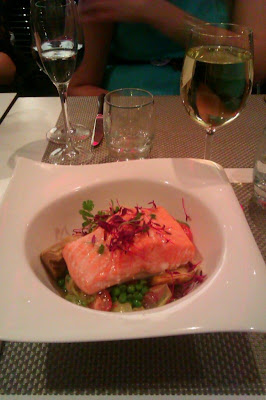 Good service yet again and our dirty plates were whisked away and we were given our dessert menus. Although I generally much prefer savoury to sweet and I didn't used to be much of a dessert person, I am really getting into having a nice dessert after a meal. There were plenty of good choices but I eventually settled on the Eton Mess. What a choice this was! It was by far the best Eton Mess I have ever had and I literally scraped every last drop out of my bowl at the end. The cute little meringues with flecks of berries in were crunchy on the outside and a bit soft in the middle - perfect. There were gooey marshmallows and little jelly cubes which were lovely and then two amazing sauces - one creamy one and one coulis type one. Both blew my mind. A couple of little leaves added an extra interesting flavour to this fabulous dessert. 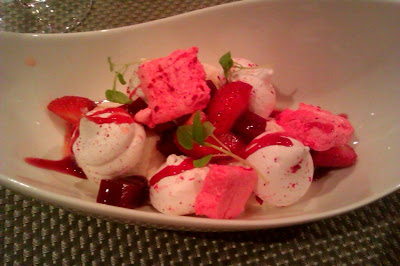 Oh but it didn't stop there. Turns out Heather was too full (?!) for dessert but ordered one anyway as the menu would have worked out more expensive not to, so she chose Chocolate Mousse. And what a mousse this was! Rich, dark and smooth with a crunchy biscuity crumb and some fruity sorbet to offset the richness. I had to really stop myself after "a taste" turned into three spoonfuls. 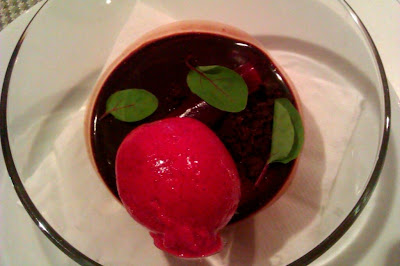 Unfortunately the excellentness of the dessert meant I couldn't, and still haven't, decided whether I preferred the amazing dessert or the amazing starter!

So as you may have guess from my gushing review I really liked my meal at Harvey Nichols Second Floor Brasserie. The food and drink were both excellent and great value for a posh girly meal. The service was impressive - the staff were great and way they handled such a large group was incredible and none of us were kept waiting for our dinner. If I had to find fault - and this is going to sound really picky - I would say I would have preferred it if my three courses hadn't been served in bowls. Although the presentation was very good, I found the bowls really difficult to eat out of and my arms ached a bit by the end of having to hold my fork and knife up so high! 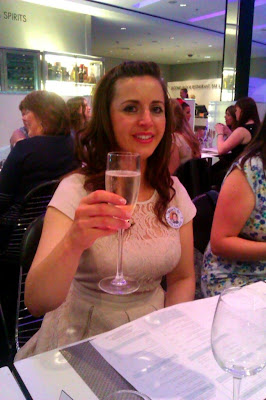 I fully recommend Harvey Nicks Brasserie for a nice ladylike meal. Unfortunately for me, Bailey took a look at the menu and my photos and thought it didn't seem like "his thing" so we will have to wait a while before I return.

Posted by Jules at 6:16 PM
Email ThisBlogThis!Share to TwitterShare to FacebookShare to Pinterest