Yesterday we ventured into town to redeem our Living Social voucher for a breakfast at Jack Spratt Healthy Eatery. When I first saw the deal flash up in my emails it seemed like such a bargain - £4 for two breakfasts and two hot drinks, but actually when I read more about Jack Spratt, it seemed more like a place I would want to go anyway. 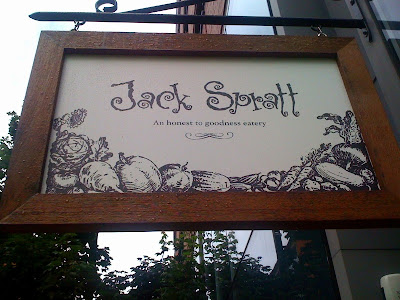 Described by their website as an "honest to goodness eatery", the folk at Jack Spratt aim to bring nutritionally balanced food made from fresh, local produce to the people of Manchester. They even donate all their tips to UNICEF. Ace.

We had high expectations of our trip to Jack Spratt as we heard that Rob Munro and Claire had paid them a visit and had liked it enough to go back there in the same week.

Our first impressions of Jack Spratt were good - cosy feeling provided by vintage furniture and retro comfy chairs, very relaxed atmosphere and some playful pics, quotes and tips related to healthy eating on the wall for you to look at. Oh, and who was that sitting over there? Rob and Claire themselves! 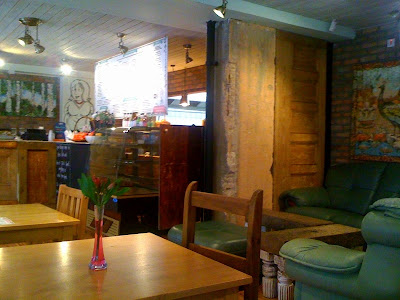 A quick glance at the menu and we were very impressed. Before any of the food had even passed Bailey's lips he was planning when he should come back for an Argentinian Steak Melt. I should also point out for my friends who can't eat wheat and gluten, all the sarnies are available on gluten-free bread. 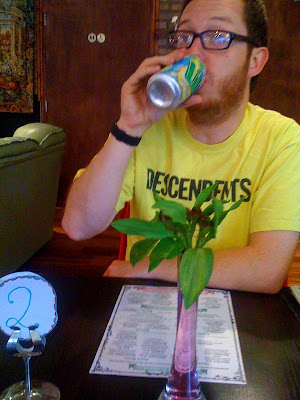 The gent at the bar was very friendly when taking our order and was very attentive to us throughout our visit. I liked the way he greeted everyone who came in like an old friend with a cheery "Hello mate!" I also loved the cute home-made table number they gave us.

I ordered the Jack Spratt Veg Grill Up with a poached egg and a cup of coffee. I think sometimes us veggies can feel a little bit short changed when it comes to brekkies as a lot of the time places don't seem to use much imagination and just give us an extra egg or some more mushrooms or some Linda McCartney sausages I could have cooked myself. But I was really happy to see a lovely pile of bubble and squeak and a potato rosti on my breakfast. It looked great and I couldn't wait to tuck in. 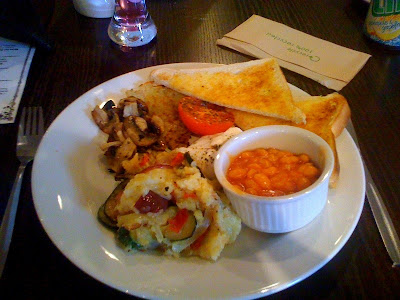 My breakfast was really tasty, I really liked the bubble and squeak which had a surprisingly creamy texture from the potato with some nice crunch from the red onions. My poached egg was also perfectly cooked and the yolk lovely and creamy - the sign of a good quality egg. 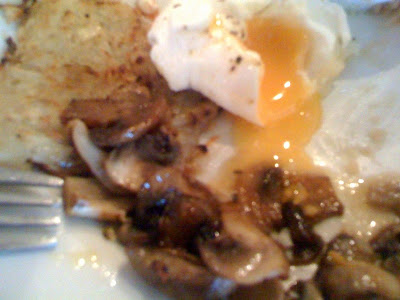 I was surprised with it being a healthy eatery that the toast on my brekkie was white and would probably have asked for wholemeal had I known. But actually the white toast, which I NEVER have, was a real treat and went really well with the other stuff on the plate. Here I am looking very happy with my food and you can sort of see Rob and Claire in the background. 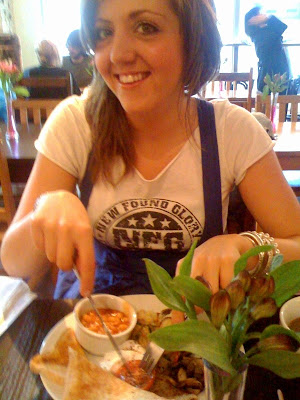 Bailey had a Jack Spratt Grill Up with a fried egg and a cup of tea. 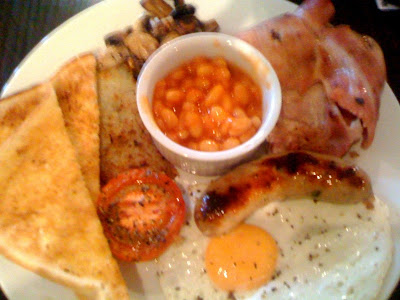 Despite what I said earlier about veggie breakfasts, on the other hand, there have been many occasions when Bailey has been really jealous of my veggie ones as his breakfasts have been let down by bad quality meat. Bailey is very fussy about his meat but the bacon and sausage on his Grill Up were flavoursome, lean and well cooked. Another thing Bailey is super fussy about is eggs but that was also perfect.

Bailey's only complaint was he felt the plate his brekkie was on was a bit small and he didn't have enough room to manoeuvre the food on there. Not bad that this was his only quibble though!

We had an excellent breakfast experience at Jack Spratt and will definitely be going back there again. We both thought that their use of quality ingredients really made a difference to the flavour of the food and I really liked the ethos of the place. I also thought that their breakfasts proved your food doesn't have to be swimming in grease and covered in salt to be delicious and I think on a hangover morning a good hearty Jack Spratt Grill Up would make me feel loads better than your average deep fried breakfast. I also can't wait to go and try out some of their lunch options and gourmet sandwiches. 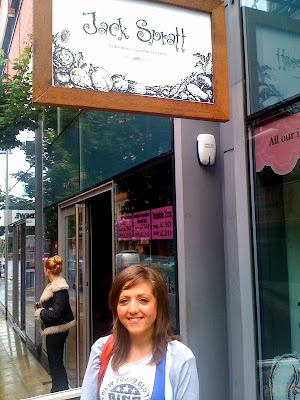 Posted by Jules at 9:33 AM
Email ThisBlogThis!Share to TwitterShare to FacebookShare to Pinterest