Myself and Jules were recently in the Hull area to celebrate the wedding of some good buddies. We had a spare Friday night before the big day and so after a quick google search for vegetarian restaurants we found Hitchcocks Restaurant. This is a restaurant that needs a little bit of explaining. It is an eat as much as you like vegetarian buffet which only opens if they receive enough bookings but the cuisine of the night is picked by the first person to book a table for that night. Apparently they like a challenge and are open to any suggestions! On our night the cuisine was Italian which is lucky because we had no idea what we would have picked if we had been the first person to book. 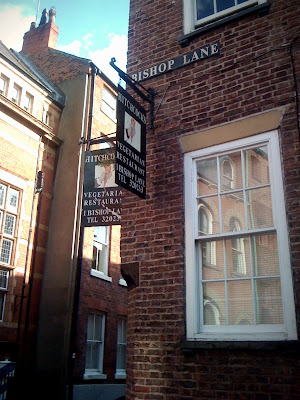 The restaurant itself is tucked away in the cobbled streets of Hull, Hull itself was much much nicer than people had let us to believe. As we walked down the street, from around 400 metres away we got the first waft of a garlic pong in the air, a good start. The restaurant itself is a sight to behold. You have to ring a door bell and a waitress promptly appears at the door and leads you through a couple of stairways and corridors before you emerge in to an expansive upper floor multi roomed restaurant which is cluttered (in a positive way!) to say the least. We were then seated at a lovely table for two and the waitress explained the concept of the night and the schedule for food serving. First of all, and this is a big win for Hitchcocks, 100% of the service was brilliant. The staff were courteous, professional and absolutely hit the nail on the head when it comes to striking the right balance between ensuring we were okay and leaving us in peace. 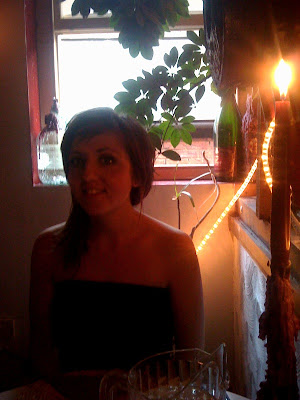 The first item of food to appear was the starter which was delivered straight to our table a few minutes after we arrived. It was a bruschetta and may well have been the source of the long distance garlic smell. It was a great example of why you should not be shy with flavours. A brilliant combination of tasty bread, super fresh tomato and lashings of salt, garlic and oil. My expectations were set high for the rest of the meal. We had time for a couple of cheap drinks (50p for a glass of coke!) before it was announced that the main course was being served on to the hot plates. 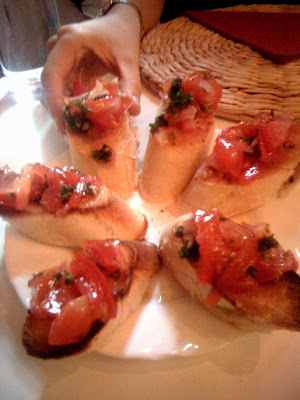 We were the first to the buffet. As always. 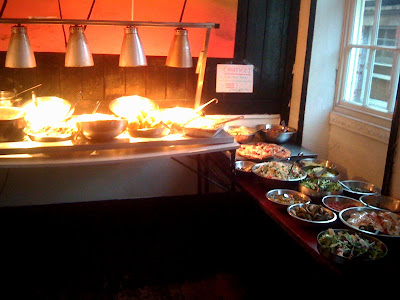 As several plates were consumed it would be easier to split it by plate. 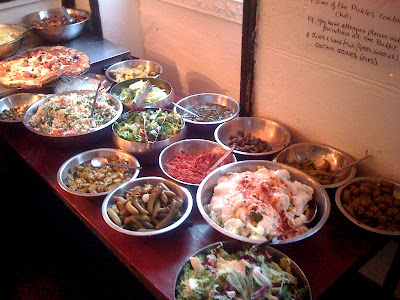 My first plate was split evenly between vegetable lasagne and pizza. The first thing to say is that the food served at Hitchcocks is not restaurant style, everything has a definite 'home cook' style to it. The lasagne was really nice and again benefited from the chef not being shy with the cheese giving its lots of flavour. The pizza was a mixed bag. While the toppings were generous and tasty the base was a little bit dry and chewy. This was good food cooked well but a step down from the amazing bruschetta. 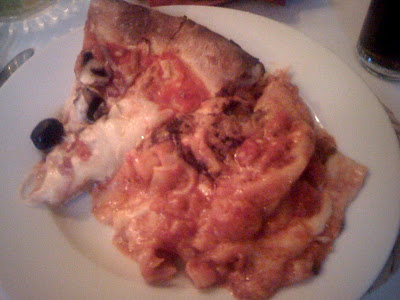 Jules' first plate was a large salad plate including peppers, cauliflower, olives, cous cous, a leafy salad and tomato/harisa style relish. She loved it with the only complaint being that there was just a little bit of an excessive amount of parsley in there that overpowered the rest of the meal a bit. 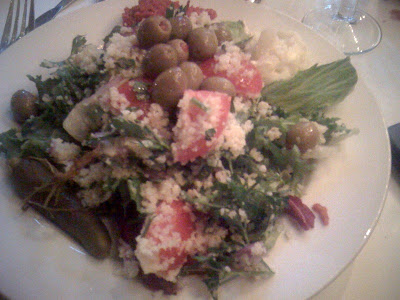 My second plate was a sizeable plate of spaghetti with a spinach/pesto sauce. This was not great. The spaghetti was a little undercooked and the sauce didn't really taste of everything. The drawback of the buffet setup was that I felt I needed to eat everything before I went back to get any more. So I had to put away quite a lot of tasteless pasta before I could try anything else. 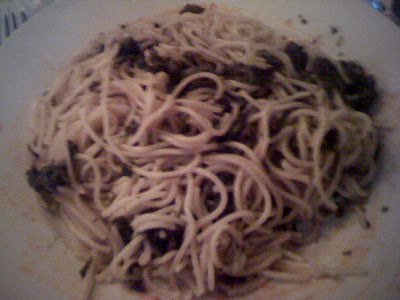 Jules' second plate included the same pasta I had, corn on the cob and an aubergine/vegetable pasta dish. Jules felt the same as me on the pesto spaghetti but raved about the other pasta. There were lots of really chunky aubergine pieces in the pasta that gave it a really strong flavour. The corn on the cob was an odd dish to have on an Italian night but it did the job. 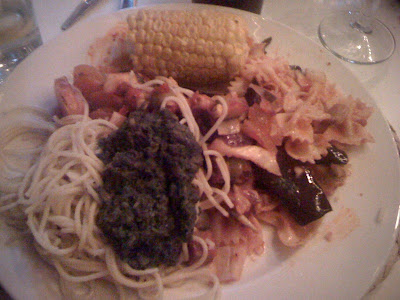 My final savoury plate of food included spaghetti bolognese (quorn based), chips and roasted carrots. This last plate was a real winner. Super tasty bolognese sauce with plenty of seasoning, crispy fries and the roasted carrots was a really good combination. It was a good way to end but halfway through I was absolutely stuffed but again I would have felt bad if I had left lots of food on the plate so I struggled through as much as I could leaving myself uncomfortably full 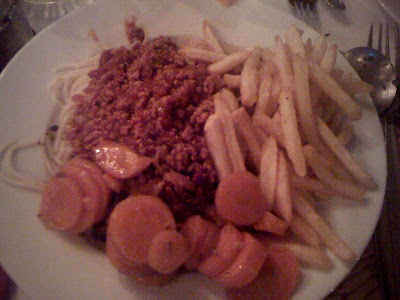 Jules liked the aubergine pasta so much she got a second plate plus a slice of pizza which was all enjoyed. 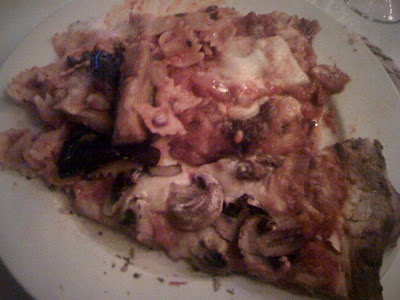 I was fit to burst. Then they opened the dessert bar. I managed a single slice of chocolate fudge cake with ice cream. I wish I could have managed more as there was a bewildering range of options. During the night we had noticed that some people had very little in the way of food, that was until the dessert bar opened up. It was clear that for some people that was the moment they were waiting for. 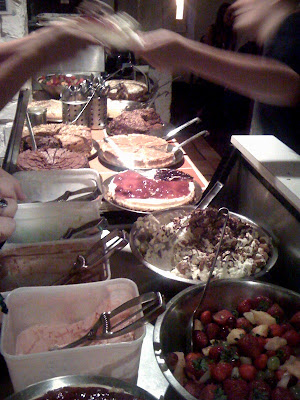 Jules went for the sensible option of a fruit salad, a nice way to finish what was a predictably heavy going meal! 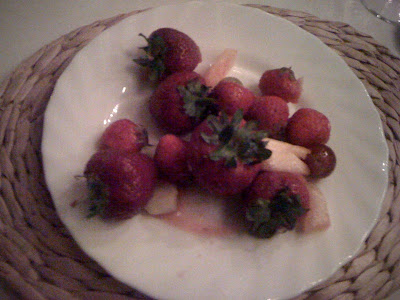 It was a mammoth meal and because there were so much going on it is hard to summarise. The food is good homecooked fare and with the breadth of dishes being served and no set regular cuisine for the restaurant there are, understandably, always going to be one or two plates that don't quite hit the mark. One thing that will never disappoint though is the brilliant service and the great atmosphere of the restaurant full of interesting and unique decor, my favourite being the monkeys and moose wielding Devo power domes. 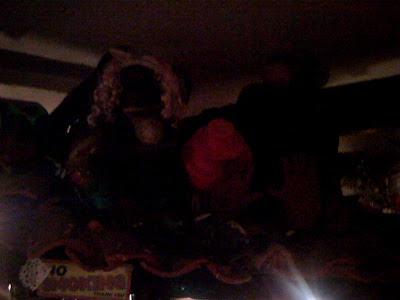 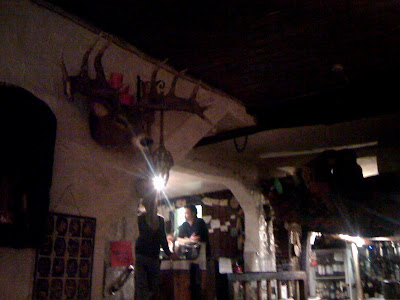 Posted by Bailey at 4:31 PM
Email ThisBlogThis!Share to TwitterShare to FacebookShare to Pinterest