Yesterday I decided to have a crack at making my own "chicken" tikka pieces accompanied by home made flatbreads. 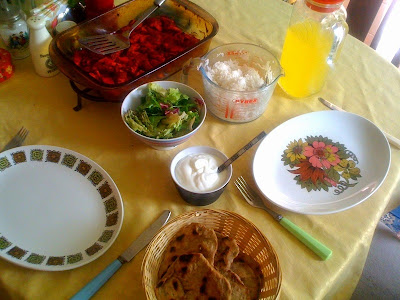 I've been thinking a lot lately about different yummy veggie picnic foods and have seen Quorn Tikka pieces on sale in the supermarket and thought they would be perfect for a little al fresco feast. The other week I had a bash at making Chicken Tikka Massala using Quorn fillets which turned out really nice and the best part of the dish was definitely those sharp, spicy, flavoursome little pieces of Quorn. 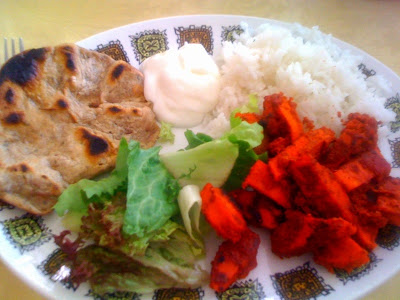 I also used to make my own flatbreads all the time to go with various curries and know how easy and rewarding it is but hadn't done that in ages. So I thought yesterday was definitely the time to get back into the habit!

The meal was really easy to put together and would be ace for a picnic or barbecue as the food can be served cold or hot and the preparation can be done well in advance, even the day before.

I tried out a different style of flatbread this time, inspired by having spent the morning reading my Morocco travel guide, and decided to throw a few spices and herbs into the mix. I got a little worried at one point as the dough smelled really strongly and sweetly of cinnamon, but actually the finished product tasted ace. The cinnamon was just right and was offset really nicely by the cumin seeds. 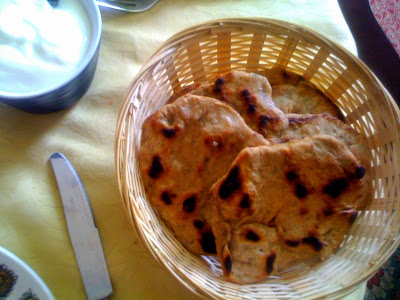 Served with plain white rice, salad and a bit of natural yogurt for dipping, this turned out to be a really tasty summer's meal and could work great for a picnic. I think the flatbreads would also taste great alongside some homemade falafel and houmous - I for one intend to get experimenting with different combinations! 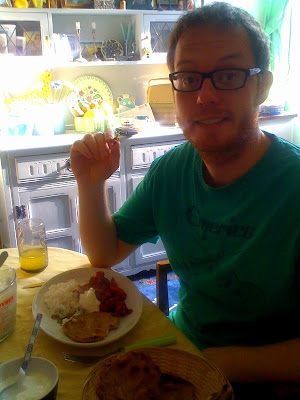 Both the flatbreads and chicken tikka should be made in advance. Making the tikka marinade is simple. Start by mixing the yogurt up with the lime juice. Then add the tikka curry powder along with the food colouring and salt and pepper to taste. 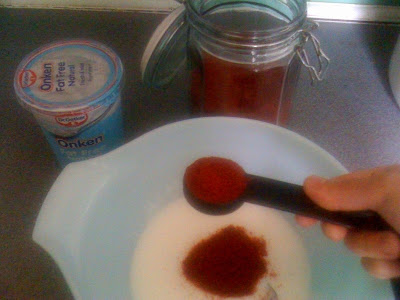 Chop up the quorn or chicken into bitesize chunks and add to the sauce. Leave, refrigerated, to marinate for at least two hours. 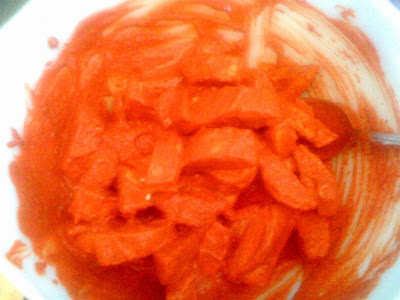 Now start on the flatbreads. Combine the flour, cumin, coriander and cinnamon in a bowl. 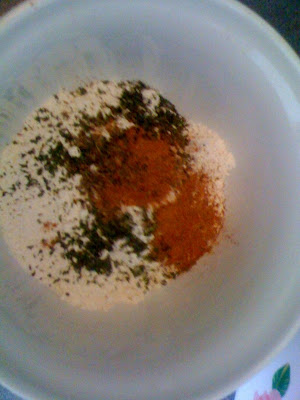 Take the water and gradually add a little splash here and a little splash there. Mix after every splash of water has been added until you have a firm dough. You don't need to add all the water! Just play it by ear - the dough shouldn't be too sticky, but if you're accidentally too heavy handed with the water, add another dessert spoon of flour to firm it up. 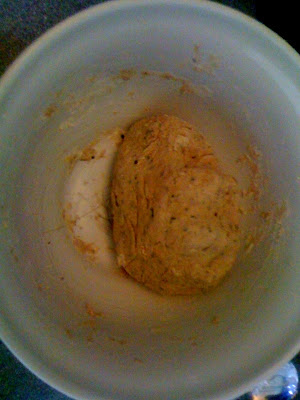 Knead a little until you have a nice firm, solid ball of dough. 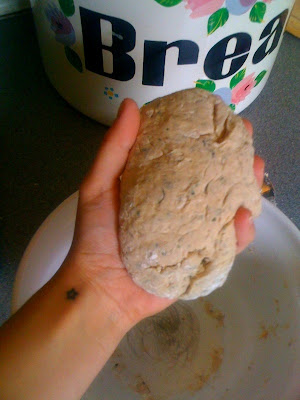 Leave the dough to rest until you are ready to start getting your meal together.

Once it's coming up to time to eat your yummy dinner, you can start cooking your tikka and flatbreads together as they take roughly the same amount of time. Start by heating up your grill for your chicken tikka. Arrange your tikka pieces in an oven dish ready to stick under the grill. 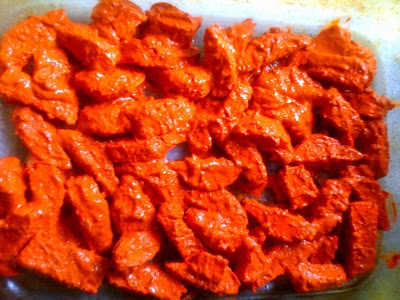 Get a couple of frying pans on the stove heating up too. Separate the flatbread dough into 8 equal balls. The dough may be a little sticky now so use a lightly floured surface to work on. 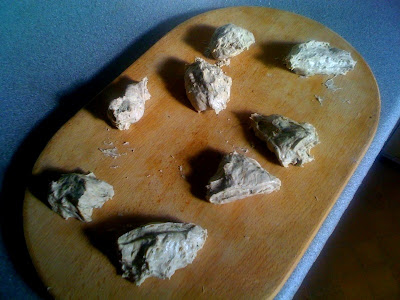 Using your fingers, stretch and flatten the dough to form 8 rustic little flatbread shapes. Doesn't matter if they look a mess as they will look dead cool once they're cooked. 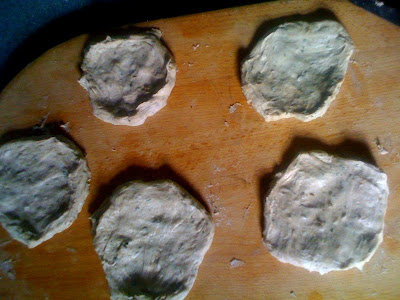 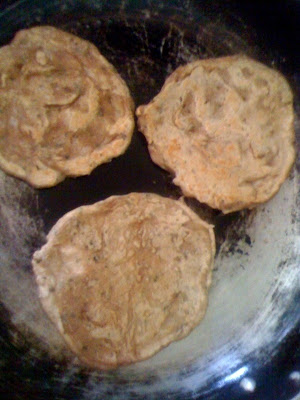 Have the heat up high and watch as the flatbreads start to cook. They will start to change colour and get little blistered patches of black on them. 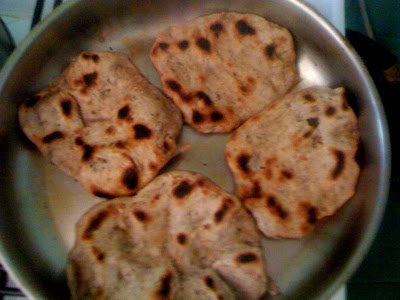 Keep your eye on the chicken tikka at the same time too. When the tops of the quorn / chicken pieces are looking toasty and grilled, turn them. Obviously with real chicken you need to be more careful that they get thoroughly cooked.

Meanwhile, keep turning the flatbreads until they are firm and crisp and all areas of the dough have turned lighter. 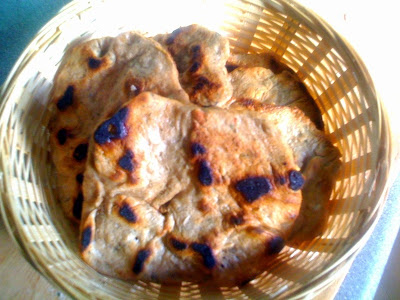 Once the chicken tikka is toasty and cooked through, take it out from under the grill and you're ready to go. 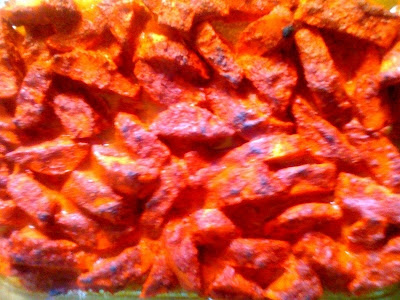 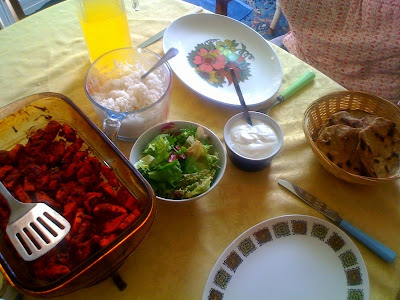 Posted by Jules at 10:17 AM
Email ThisBlogThis!Share to TwitterShare to FacebookShare to Pinterest