For indecisive diners with a huge hit-list like me and Bailey, deciding where to eat out is already difficult enough as it is without throwing "must be showing the football" onto the list of criteria - a position we found ourselves in last Sunday when meeting up with our friends Kate and Chris for a lunch/footie-based catch up. 'Good food and football' sounded like an oxymoron to me, but we eventually whittled the suggestions down to Fallowfield's Friendship Inn - pretty much equidistant to us and our mates. 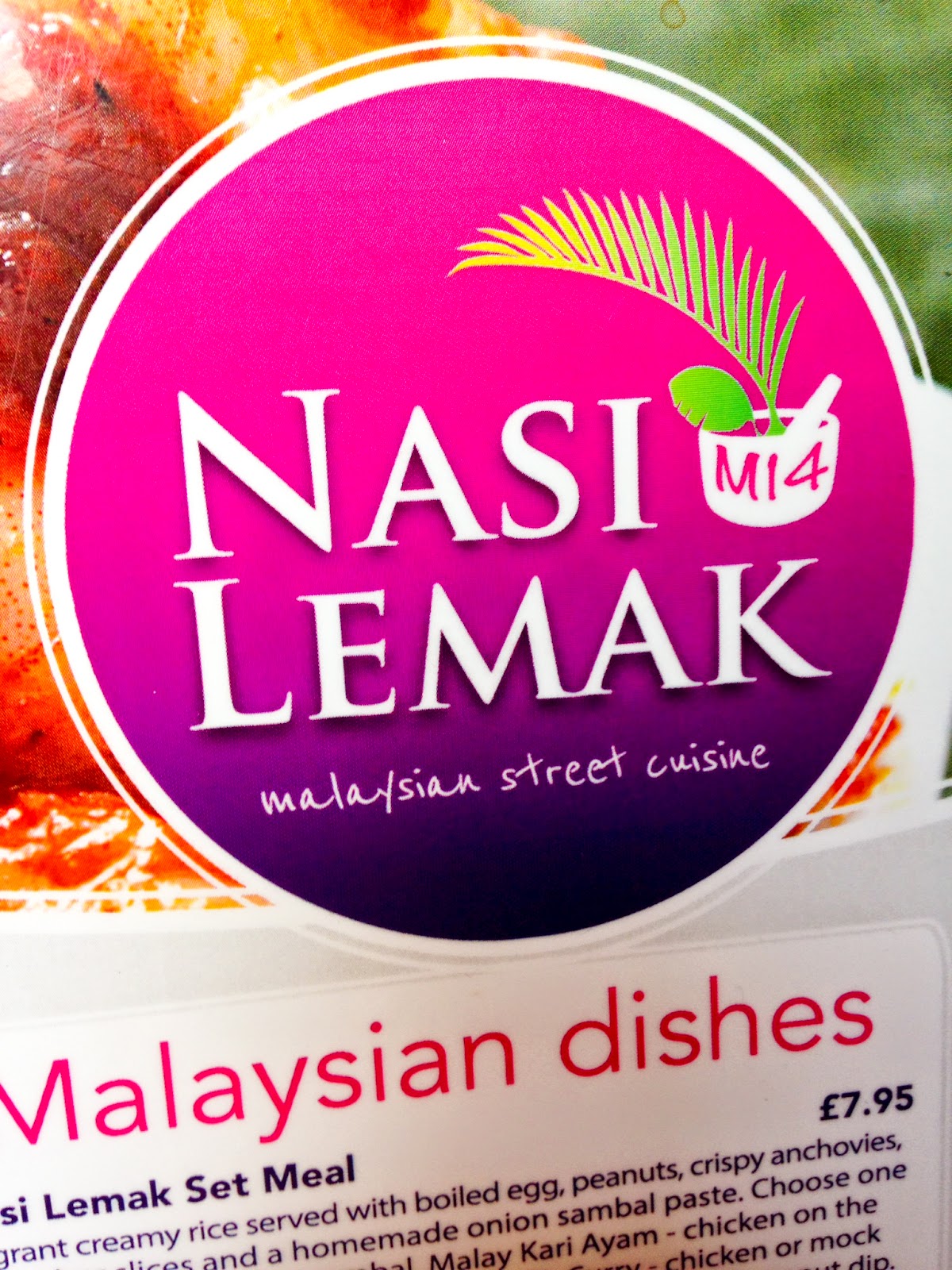 The good news for football lovers is that Friendship Inn is a really good pub for watching football in (so I'm told, I wouldn't know as I never do this). The good news for food lovers is that Nasi Lemak are in charge of serving up Malaysian "street cuisine" which comes recommended by the excellent Bobby's Bangers family who know a thing or two when it comes to tasty scran.

I have to say Nasi Lemak's website isn't the most professional I've ever seen, with large chunks of randomly placed Lorem Ipsum appearing on the mobile site. Also, what the dickens is a YouTube Rendang?! According to the menu description "everyone's cooking it these days", yet I was stumped by a simple Google search... 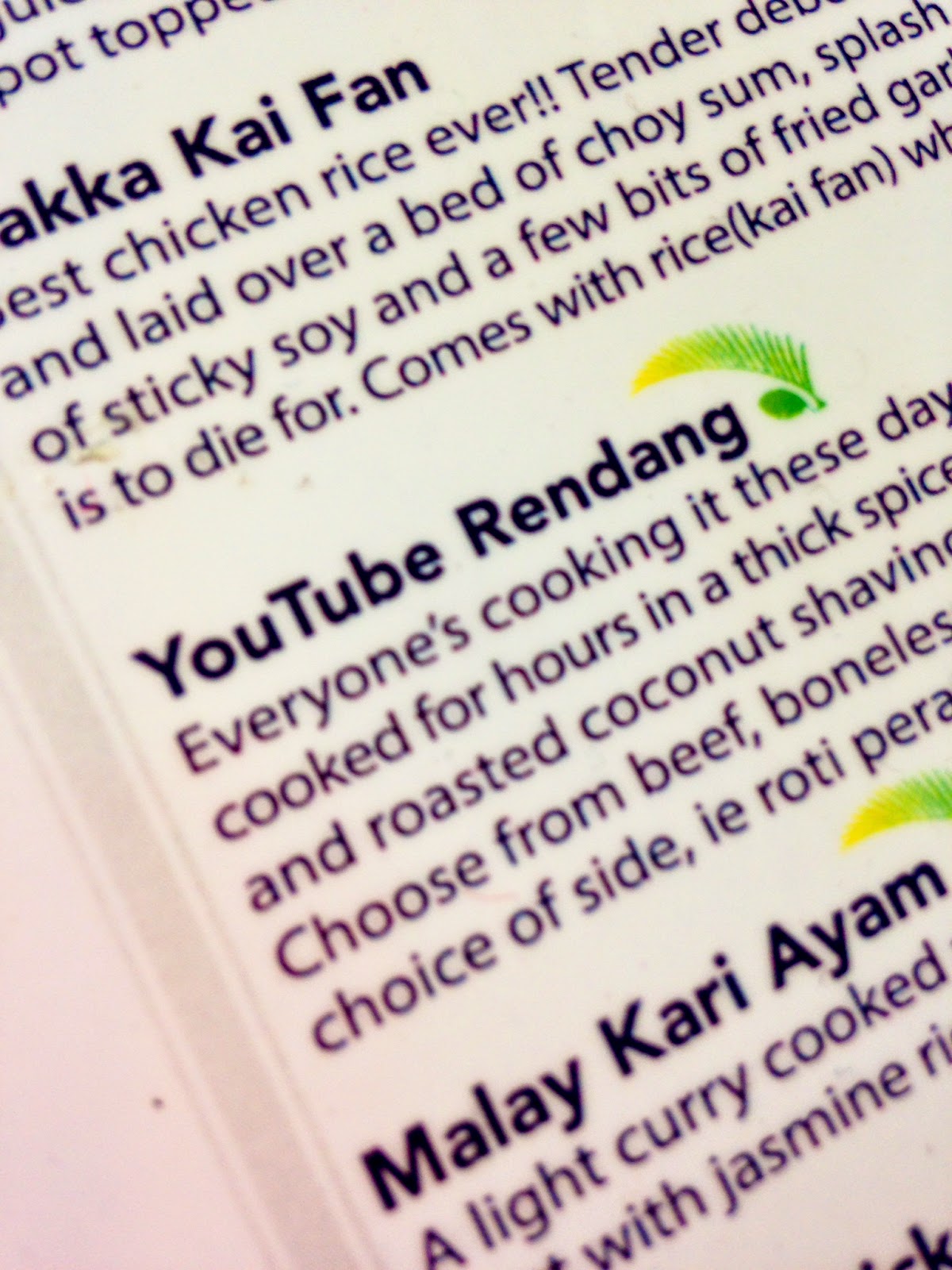 First impressions of the pub itself on arrival were good - friendly atmosphere pre-match with Manchester City and Liverpool fans coexisting harmoniously and a nice buzz in the air. First impressions of the menu were less good - why would you have an extensive list of delicious authentic Malaysian cuisine then also offer crap pub classics on the reverse side? One look around the pub at the tables and tables of people tucking into burgers and chips answered my question immediately, and that was before two members of our party also ordered from this side of the menu.

Kate, who was keeping it Malaysian with me, ordered the Satay Ayam chicken and Ikan Bakar cod which were both delicious and not shy with the spice. These were visually so appealing that they attracted a great deal of attention from a neighbouring table of football fans who then also ordered some. 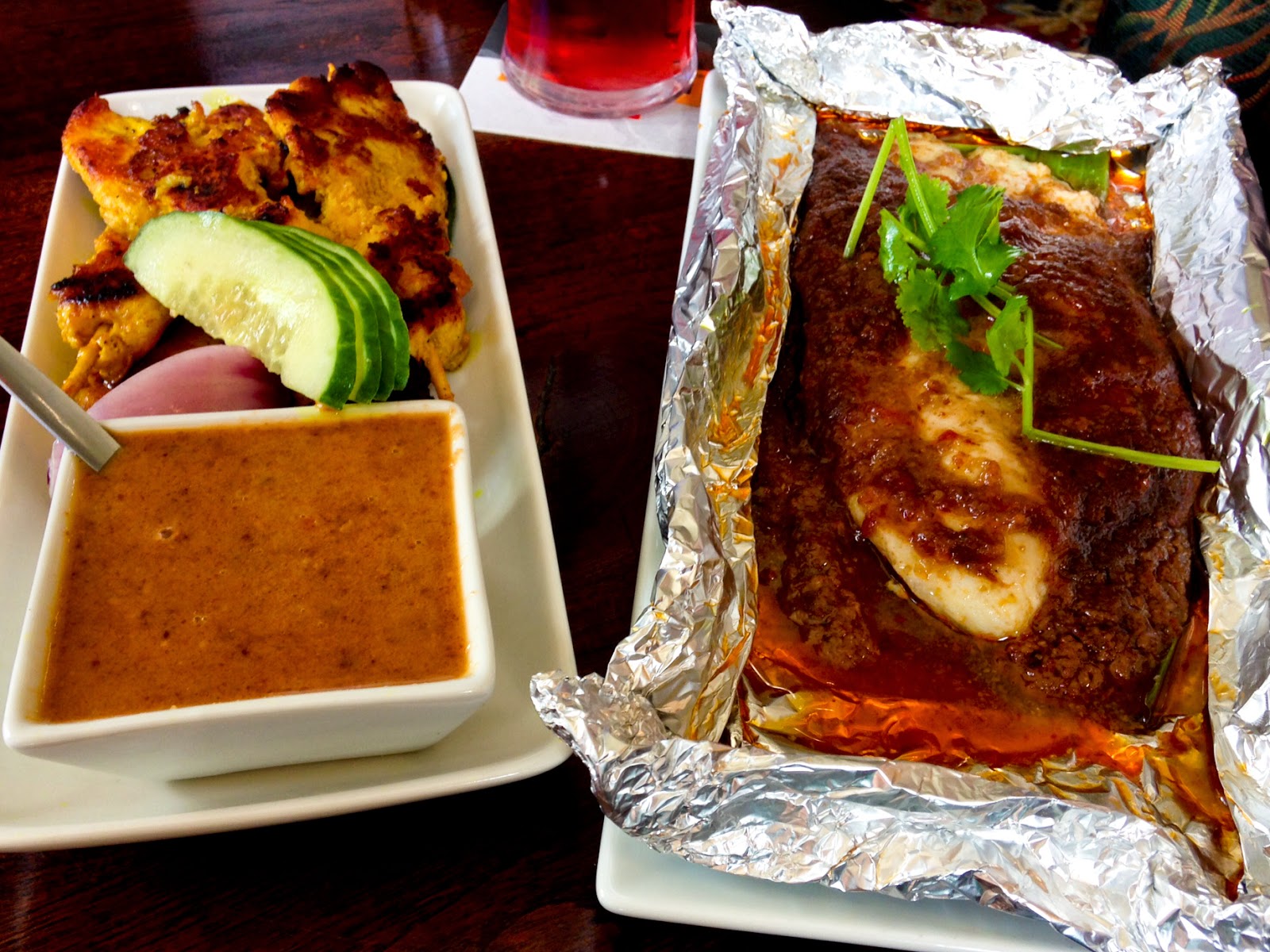 I was delighted that many of the dishes on the menu could be converted to a vegetarian alternative of mock chicken - my favourite vegetarian chicken no less, also used by my most beloved Heaton Chapel takeaway The Miramar. I went for the Devil's Chicken Curry which had a really tasty sauce and the perfect level of heat. The fake chicken was nice but I would have liked a bit of veg in the curry or on the plate - something for a bit of colour and crunch. The Jasmine Rice I chose to go on the side was great. 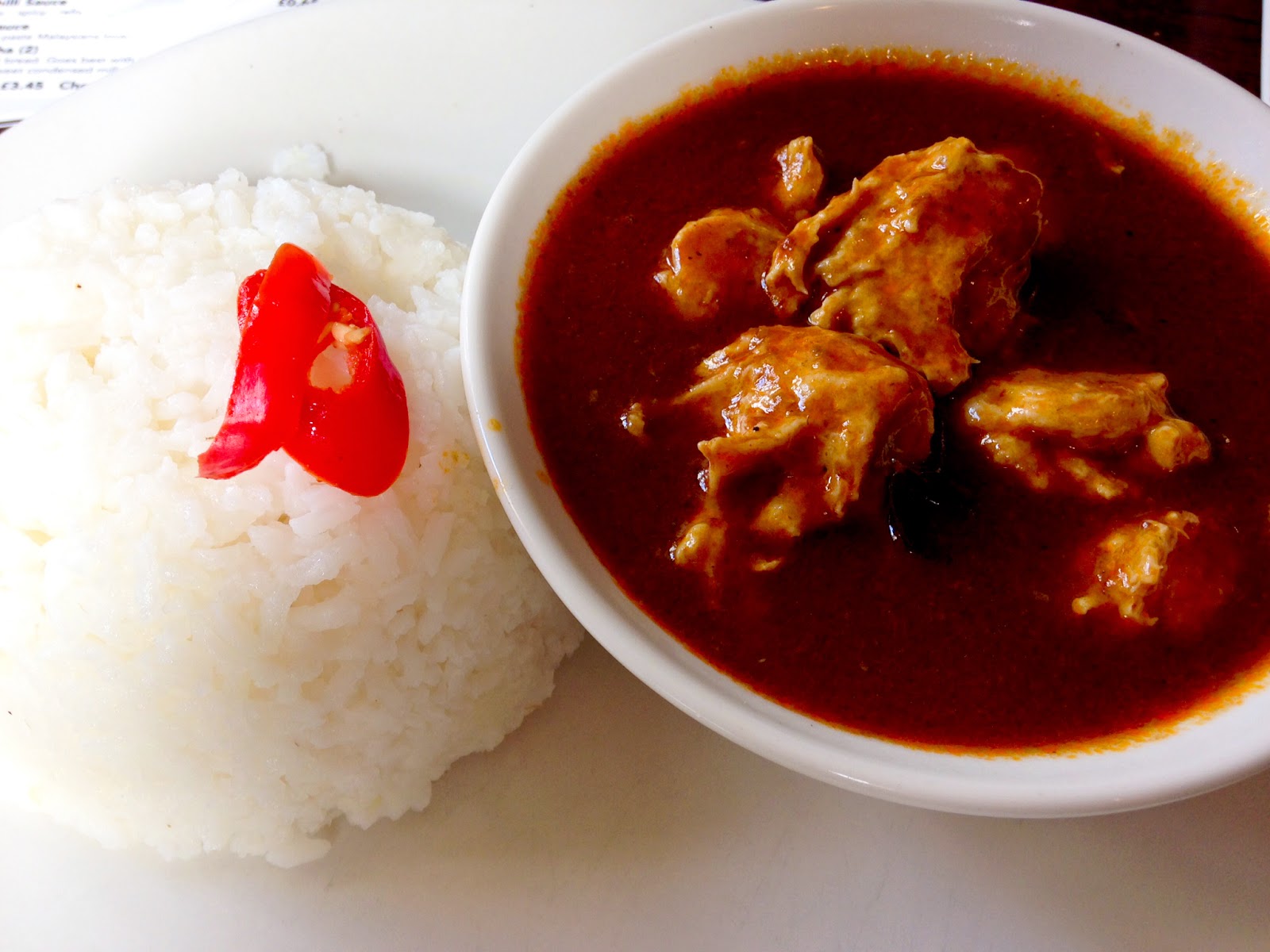 Bailey and Chris both seemed happy enough with their burgers... 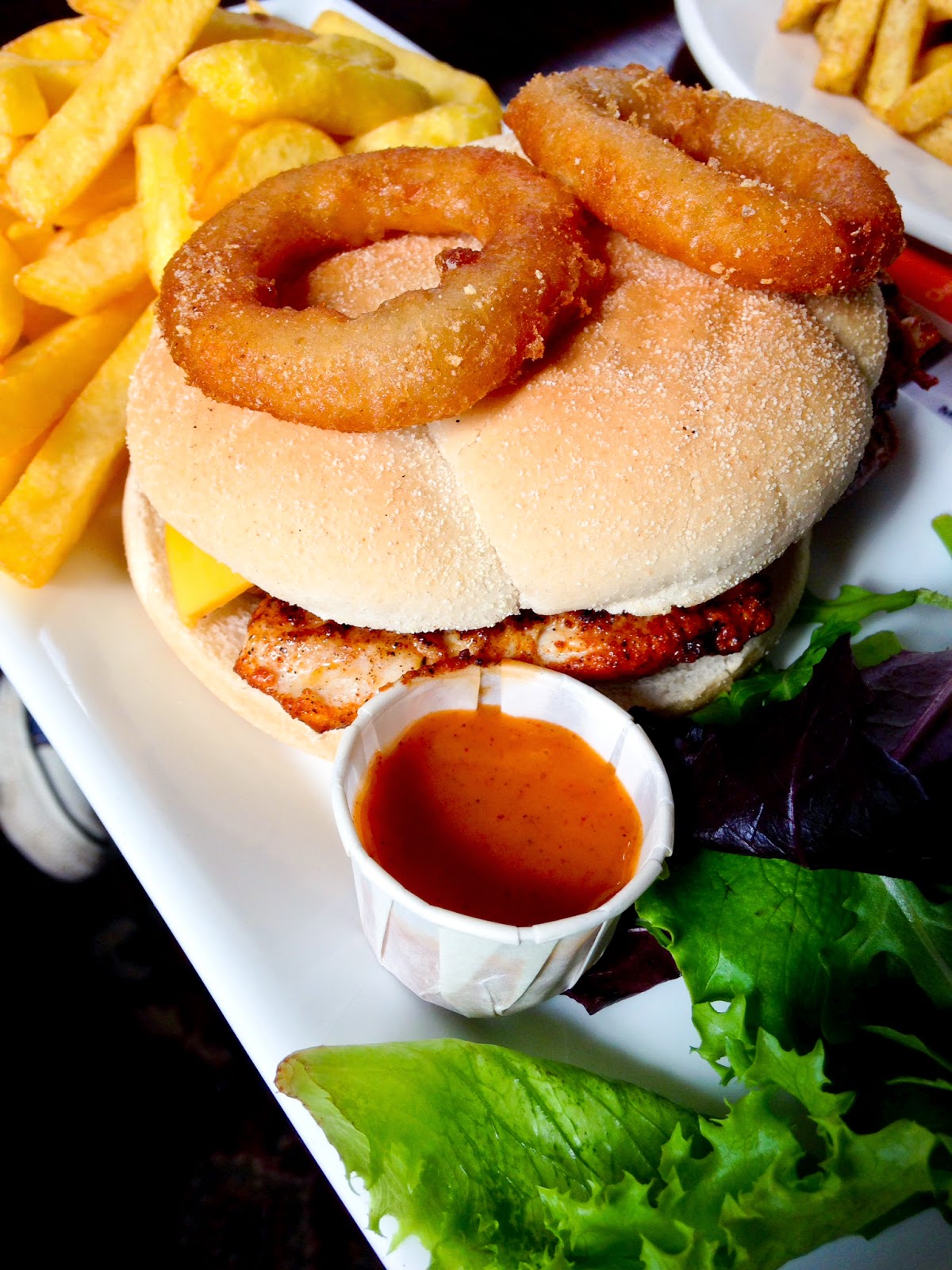 ...but what really impressed them were the mammoth portions of Salt & Pepper Chips they ordered on the side. The chips themselves were OK with a good crunch-to-fluff ratio but it was the sweet and fragrant five spice coating and the addition of veg strips that we loved. 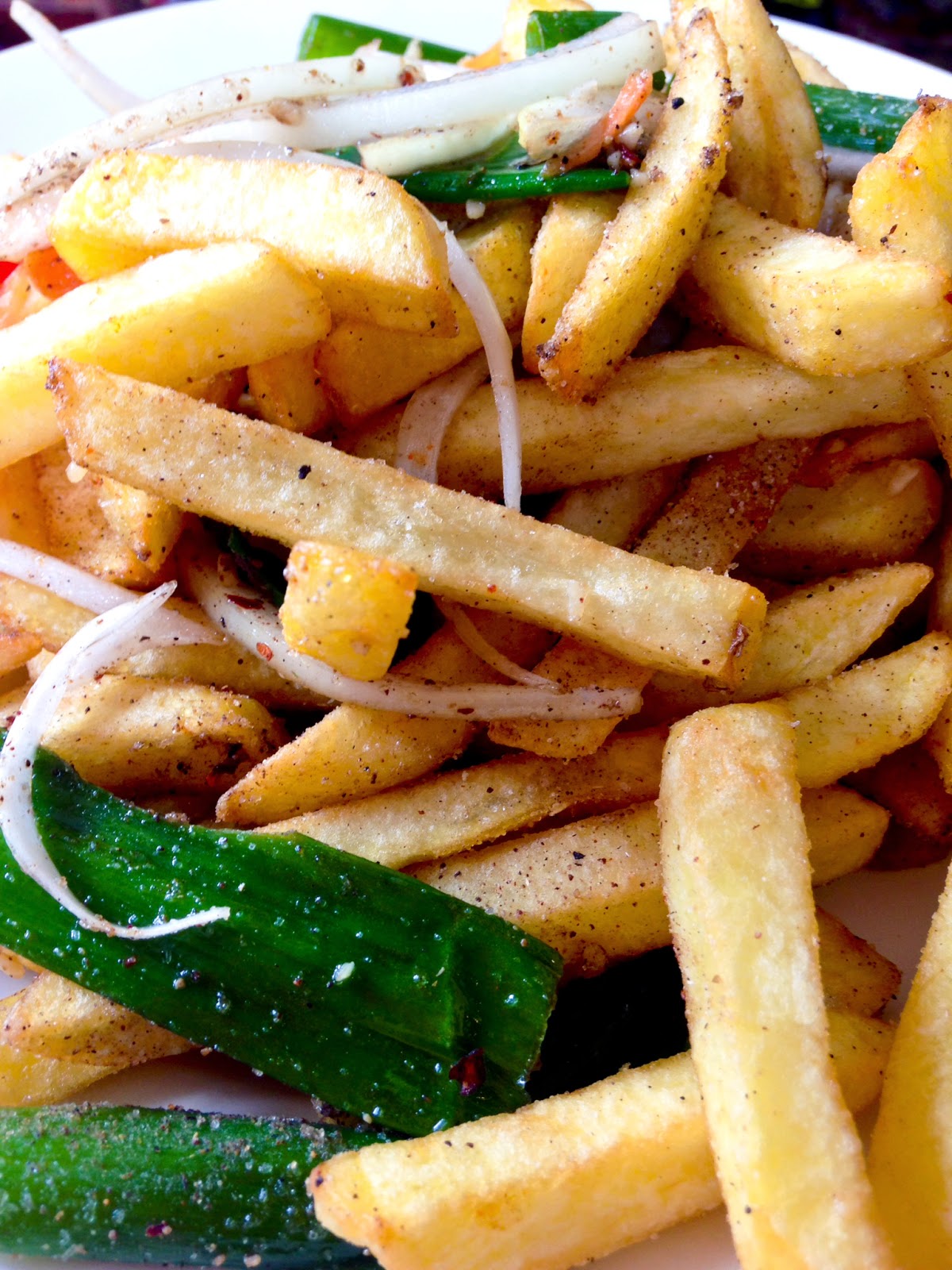 Turns out I was also pleasantly surprised to quite enjoy the football, although this could be due to the fact that our sofa was facing the rest of the pub so watching the faces of the fans was enough to provide me and Kate with 90 minutes of entertainment in itself. While I'm not suggesting you need to rush to the Friendship Inn immediately, you could do a lot worse than ordering yourself a Nasi Lemak takeaway and rocking up there to eat Salt & Pepper Chips while watching the match.

Oh... and I tweeted Nasi Lemak to find out what a YouTube Rendang is... Turns out it's like ordinary Rendang, but they wanted people to YouTube the name (like an instruction?!) and also wanted to 'cheekily' suggest that they might have gotten the recipe off YouTube... I'm still fairly confused but intrigued so will probably order the mock chicken version of it next time...

Posted by Jules at 3:40 PM
Email ThisBlogThis!Share to TwitterShare to FacebookShare to Pinterest