Oh look those bladdy blaggers are going to more restaurant openings and stuffing their greedy faces with free food, blah blahhhhhh! Contrary to popular belief I can tell you that for us as well as the majority of bloggers I know, freebies are not our raison d'être; Bailey and I actually dislike going for them as they're rubbish and awkward and we try to choose very carefully about which ones we do attend. We were really excited about this one though, because it was the press launch of the much talked about Red's True BBQ and we'd managed to bag a table with our lovely friends @mcrfoodies (safety in numbers and all that). 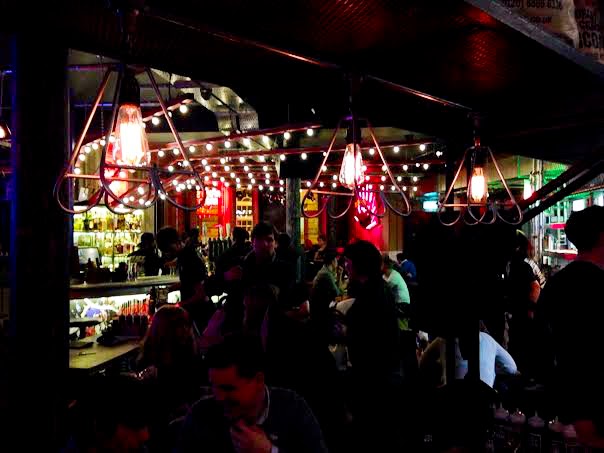 There was a time when we were so desperate to try Red's True BBQ's food that we were planning to go all the way to Leeds especially. However, after sampling some of their food at Grillstock, Bailey was a little underwhelmed when comparing their offerings to other local BBQ purveyors. With that in mind, we were a bit dubious about their claim that they were "here to save Manchester from bad BBQ". They'd set the bar high for themselves with that one.


We did think however, that Red's may be the company to start taking a chunk out of the profits of Manchester's most beloved burger bar nearby. It's inevitable that some comparisons will be drawn and we're quite interested to see if Red's splits the meat-loving crowds. 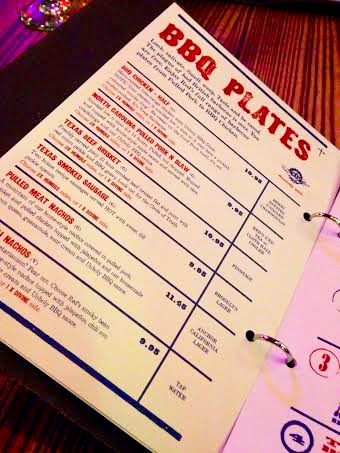 Setting foot inside Red's is quite an experience. Some serious paper has been spent on doing this place up and you can barely believe the difference to the building since the demise of Livebait. The interior is designed to transport you out of Manchester to the rough and ready ribshacks of America, although the toilets were a bit OTT for me - I felt like I was queuing for a white knuckle ride at Alton Towers.

The atmosphere of the place is party to the max - tables are crammed together so you're in chatting distance of the neighbouring diners and the music is catchy and lively, perfect for boogying along in your seats. I personally loved all this as it reminded me of the pure excitement of rare family visits to a couple of burger places in Sheffield - pretty much the only times I was allowed to gorge on unhealthy American food as a child (looking back both places were shit but at the time I thought they were the bee's knees!). This ambiance won't please everyone though - Anna and I had to keep rolling our eyes at our grandpa-esque boyfriends complaining about the music being too loud and not being able to hear each other during a conversation about semi-colons. 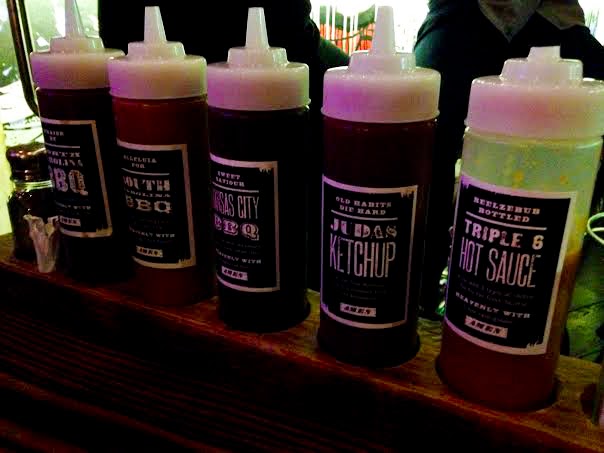 Onto the food and considering I don't eat meat and was in a place whose slogan is "let there be meat", I was slightly concerned that I'd be laughed out of the door. Fortunately Red's have taken a better attitude towards the 4 million vegetarians in the UK than another rival eatery I could mention and even have the veggie options fully visible to the public on their menu! They'd also taken the time to think of something more inspiring for us than a mushroom in a bun. 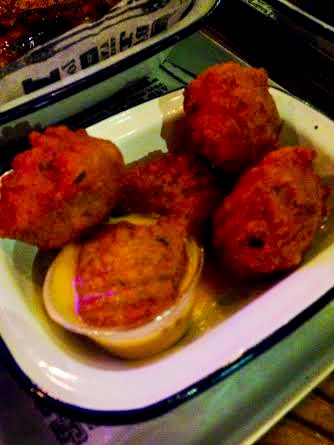 There are actually loads of lip-smacking veggie options on the starter menu, so many that I couldn't decide! I eventually settled on the Hush Puppies which were delightful little crunchy-on-the-outside, pillowy-on-the-inside sweetcorn and jalapeño balls of joy. The cheese sauce on the side tasted like cinema cheese sauce (in a good way) but without the gloopy texture. This was my favourite dish of the night. Next time I'll try the Jalapeño Poppers. 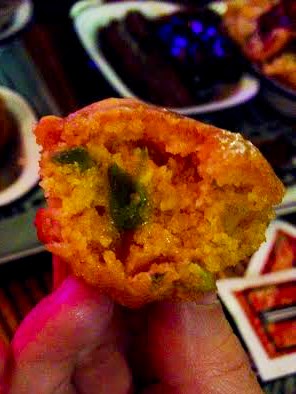 The meaty starters meanwhile received mixed reviews - the wings and ribs were tasty and well-cooked with fabulous textures but it was at this point that the meat-eating members of the party became alarmed to discover the absence of any smoky flavour whatsoever in the food Red's were serving up that evening. This was equally as bizarre as the fact that despite knowing the place was filled with smokers (there's even a huge neon sign outside saying "free smells"), there wasn't a single smoky whiff in the air. Baffling. 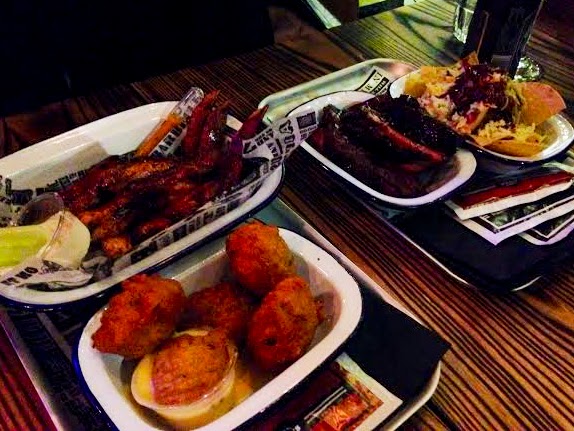 For mains there wasn't quite as much choice veggie-wise, but I was perfectly happy with the Chilli-Bean Nachos - it's been many years since I've had nachos and these were lovely, particularly as pretty much every available nachoey surface was covered with beans, BBQ sauce, sour cream, cheese, guacamole and jalapeños... LOTS of jalapeños. Delightful. All of the big 'BBQ Plates' come with a choice of either two 'Humble' Sides or one 'Divine' Side. There were loads of things I wanted to try from the humbles but I decided to forgo having two  so I could try a Grilled Corn On The Cob. I had nothing less than the highest of expectations for this - BBQ'd corn is one of life's greatest pleasures, so imagine my dismay for it to arrive completely free of any char and actually quite cold. 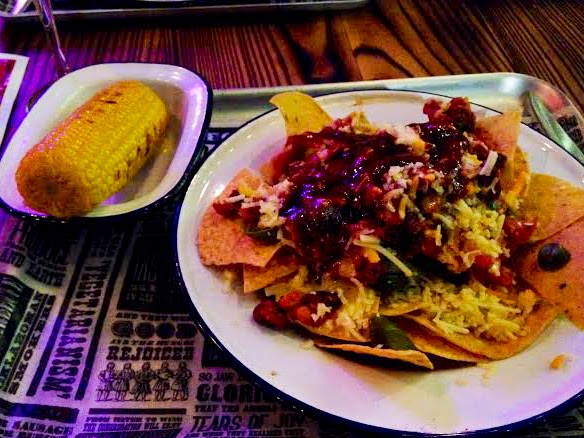 I sent this one back and the second one was a bit better but still not the yummy charry hickory bad boy I was expecting. In the words of Shania Twain (who must surely love BBQ food): "that don't impress me much".

Bailey went for the Pit Burger with a side of Mac-n-Cheese. The burger was made with great quality ingredients but had unfortunately fallen into the trap many highy stacked burgers do of becoming a mush of indistinguishable meats with a sopping wet through bottom burger bun, forcing the diner to lower themselves to the knife and fork. 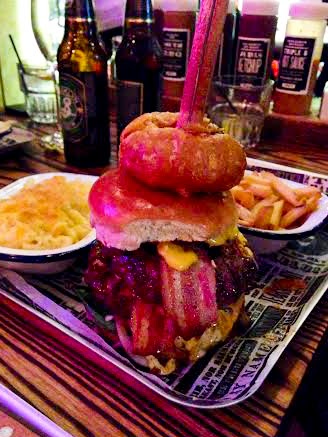 The fries and onion ring unfortunately tasted a bit dried out and the Mac-n-Cheese was a bit disappointing too as the pasta had gone mushy. It makes us sad to have to be so critical as we really wanted to love everything but I guess they didn't quite pull our dishes off on the day. One thing we did love were the hot sauces that we sloshed all over our mains - these will definitely be popular. 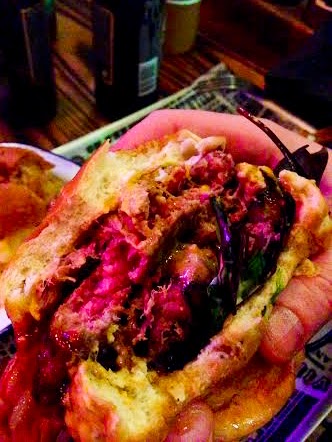 We were all pretty full after all this as another good thing about Red's is that they don't mess about with the portions. We all know about that second dessert stomach though, and I figured that what with everything else I'd eaten, a Chocolate Peanut Butter Cheesecake would be a mere drop in the ocean of calories I'd consumed that evening. I enjoyed every mouthful and the base, although difficult to penetrate with a spoon, had a great crunch to it. 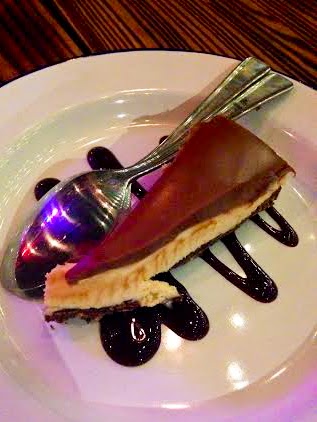 Another advantage of there being four people who love eating around the table is that we could all have a big geeky discussion about the food after the meal. The general consensus was that the food was good, but not great and had fallen slightly short of our expectations. Despite these niggles, we'd still had a really fun night with the 'exciting' atmosphere of Red's definitely being its main selling point. Service was personal, genuinely friendly and efficient throughout too (as soon as you get over the fact that staff use ipods to place the order making them look like disaffected teenagers ignoring your every word), which is more than can be said for that aforementioned nearby rival restaurant. We think people will really enjoy going here and it should bring some much needed life to Albert Square. Another point to note was that this was the kitchen's opening night, they had the place packed to the rafters and they dealt with this much better than at other press launches we've attended in the past - hopefully some of these issues will be sorted in the coming weeks. We would definitely return (I want some Jalapeño Poppers) but I'm afraid we can't say we've been "saved" just yet. 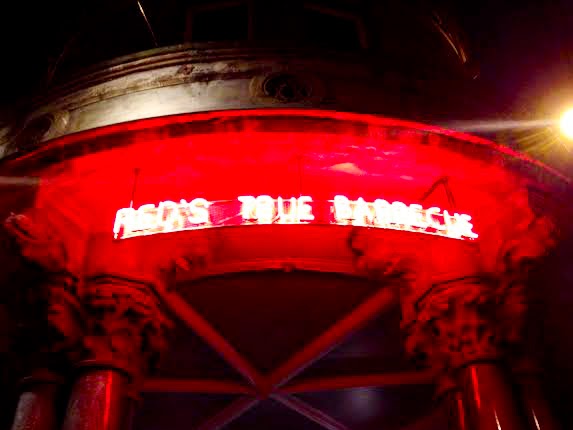 Posted by Jules at 7:26 AM
Email ThisBlogThis!Share to TwitterShare to FacebookShare to Pinterest