The Bells Of Peover

So last weekend we were pretty busy, on Friday we were out and about in Chorlton and dined at the Hungry Gecko Supper Club, Saturday morning began with a hangover and a slice of cake at Trove which led to a Dosa Xpress banquet and further boozing.  This meant that come Sunday we were feeling a little bit worse for wear due to the food and drink consumed.  Obviously the best course of action would be to stay in, drink lots of herbal tea and maybe indulge in some raw foods or perhaps a lentil soup.  We didn't take that course of action, our course of action involved going for a Sunday roast and drinking some beer. 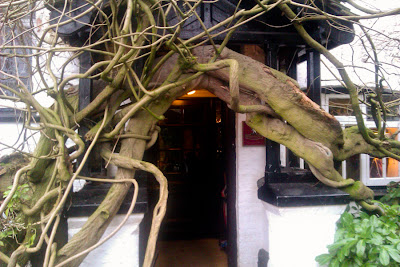 Perusing the list of restaurants on our 'most wanted' list The Bells Of Peover leapt out as we had previously read a cracking review by fellow food blogger Mrs Petticoat (we never saw Gary Barlow either!).  So without any breakfast or tea in our bellies we jumped in the car and travelled to the sleepy little village (I'm not even sure its big enough to be a village) of Lower Peover.  The location of the Bells Of Peover is its first big plus point, really easy to get to from South Manchester and what a lovely place, you will pass some gorgeous views getting there and on arrival at the restaurant (after you have made your way down an appropriately named street called The Cobbles) the building itself is fantastic especially with a dab of snow here and there.  Before we entered we had a good mooch round and marveled at the overgrown tree that greets you at the doorway.  At this point we had already decided we would be returning here in the summer to enjoy their garden in the sunshine. 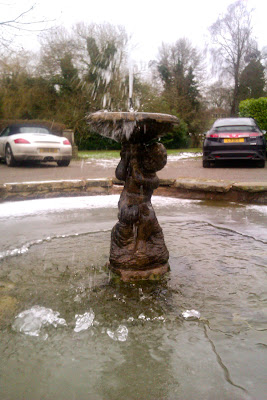 As soon as we popped our head in a member of staff greeted us and popped off to find us a table while we waited at the cosy little bar they have.  Treating myself to a pint of ale we had a good look at the menu which was fairly different to the sample menu provided on the website, it had quite a few more items on it and much more pescatarian choices for Jules and of course they had the foodstuff I was after, the roast beef. 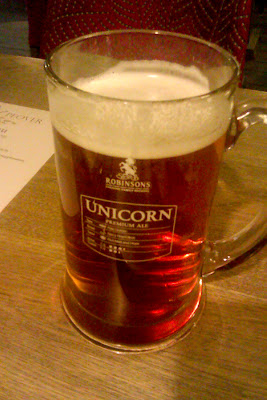 Again we have to mention how nice a venue this is for not only the exterior but also the interior.  They've really just taken a lovely pub and moved it up a notch to a finer dining hall BUT its still basically a pub.  The decor is a touch modern but it sits well with all the original dark wood and fittings that are still present.  We also spied a few of the larger tables with their luxurious leather sofas and though it would be good to come back with a larger group so we could take advantage of those bad boys. 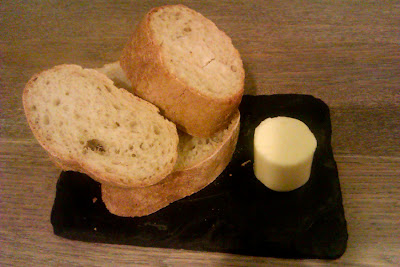 On to the food.  A nice spot of bread arrived pretty much as soon as we ordered and as we had skipped breakfast this was gone within a few seconds.  The starters appeared not too long after that.  I had gone for the confit duck leg with apple and parsnip puree.  I had really struggled to pick something from the menu but when I tasted my duck leg I knew I'd made the right choice.  Duck is one of those things that I love when its done right but I loathe it when its done badly.  This time there was a real nice flavour running through the well cooked (a little bit over if anything) meat, the skin particularly stood out especially when combined with the sauce.  The accompaniments too were cracking especially when you went for a full on Torode (has anybody else noticed John Torode's fork busting method of collecting every element of a dish on to a single fork?) when the creaminess of the parsnips and the sweet apple really hit the spot. 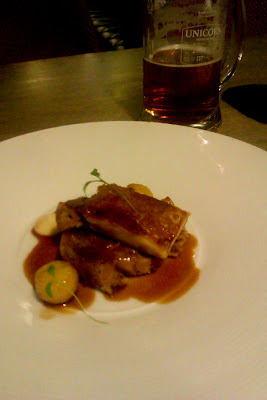 Jules had decided to go for the hand dived scallops (how else do you get scallops?  With your foot?  With a broom?) served with cauliflower, golden raisins and capers.  Jules too was very happy with her taxing choice.  The cauliflower was rich and creamy while the golden raisins sweetness meshed well with the tang of the capers.  The scallops themselves were well cooked and had a lovely looking scorch to them, the whole dish was very pretty.  This was Jules' favourite dish of the meal.  Its worth pointing out that, like the decor, the food has taken a step away from pub fare towards finer dining but these were still fairly substantial starters. 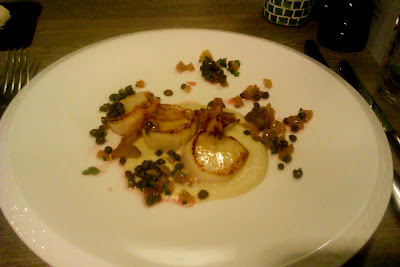 We were well satisfied with our starters and sat contentedly until the mains arrived.  One point worth mentioning about the service is that although the staff are friendly enough they seem to have this odd approach to managing tables in that they can only do one thing at a time, multitasking is not an option.  Every time somebody appeared in the dining room we were in they were there to do one job which they would do quickly and efficiently then get their head down and walk straight out.  There was a distinct lack of eye contact which for me is key in looking after your guests.  The result of this was that we had a few extended waits for dishes to be cleared and for the bill (not huge waits but significant enough for us to be sat twiddling our thumbs) and almost every other table in the room had a minor grumble (drafts, missing gravy etc.) that I was aware of (I couldn't help but pick up on their unhappiness) but the staff were not and therefore it didn't get sorted and those people either left a little miffed or sorted it themselves.  For us it was a minor annoyance mostly because it could so easily have been remedied with a quick glance, a bit of multitasking or even a brisk "I'll be with you in one minute". 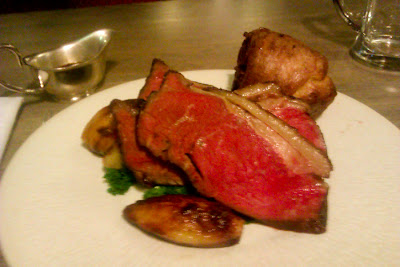 When the mains arrived I have to say I was gutted.  I had been drawn in with a promise of a roast dinner served from a board but sadly this is reserved for tables with more than one guest eating a roast and so I got a boring old plate.  A little thing I know but I was sad to miss out on the theatre of the board that I had seen other diners enjoying.  The roast itself was great, absolutely perfect veg (I have tried hundreds of times to recreate the pub roast potatoes and have never come close, any tips would be appreciated), lovely meat, a light but tasty gravy and a mega Yorkshire pudding.  Now why wasn't it a perfect roast?  A couple of things, firstly I had asked for the beef to be pink and looking at the picture above you would think that is what I got well that's what I got for the top slice.  The two slices that accompanied that first perfect one were right at the other end of the scale and were cooked well all the way through.  To be honest I'm not that fussy and normally take it as it comes but it shows a little bit of carelessness to send it out like this and even, dare I say it, a bit of cheekiness to try and hide the two well cooked slices.  The other niggle was that there was a lovely thick slice of fat on each slice of beef that was nearly impossible to slice with the table knife provided, again a little niggling problem but it did mean I lived in fear of firing dead cow across the restaurant while tackling my main course. 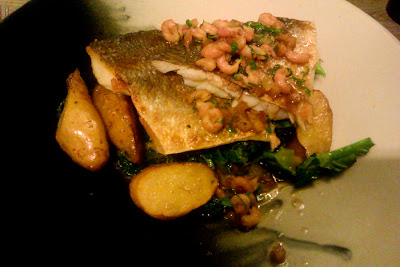 I'm not a fan of prawns (or any of the rest of that tendril toting family) myself and for some reason I find them more offensive if they are either extremely large or incredibly small, I've got nothing against the ones in the middle, they aren't too bad.  Therefore I wasn't that impressed myself with Jules' choice of sea bream fillet with brown shrimps, purple sprouting broccoli and pink fir potatoes.  That said Jules thought it looked and tasted great!  A real crispy skin on a moist slab of fish, the aforementioned tiny shrimps popped in the mouth (balk) and the whole dish was bursting with rich buttery flavour.  That was the only problem by the sounds of it, it was all a little bit too rich as by the final few mouthfuls Jules' was starting to feel just a little bit queasy.  That didn't stop her though and she soldiered through to finish the dish with a smile on her face.  What a hero. 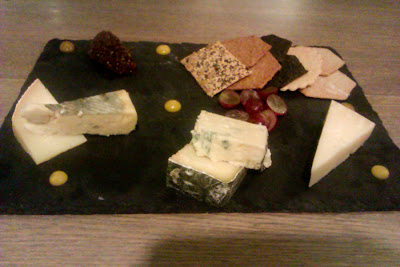 As we said before the portion sizes are a little bit more generous than you might expect and the pictures we had seen previously didn't do them justice size wise and therefore we could only manage to share a final course.  There was some discussion that we would both get a cheese selection each but in the end we went for the one.  I am glad we did as it came with a fair old whack of cheese and crackers that were more than enough for already burdened stomachs.  It was really nicely presented, all the cheeses were great and the chutney was lovely (Jules thought it tasted like mince pies).  It was a great way to finish a Sunday meal. 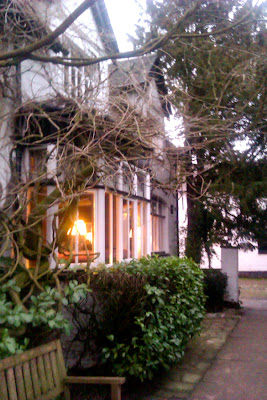 The Bells Of Peover is a lovely restaurant serving great food in a fantastic location.  At the moment they are straddling the qualities of a good country pub and a finer (but not too fine) dining restaurant mostly successfully, I think the only place they are letting themselves down is in their slightly one dimensional table service (as mentioned above) combined with the fact that the staff, on the whole, are not overly warm towards the guests instead taking a slightly too formal demeanor in their interactions which just comes across a little curt.  Now this isn't a huge problem but it adds another niggle to a meal that already had a few which means it just took the shine off the meal in my book.  I would still recommend it (especially if you like the look of the locale or enjoy the slightly more formal service) and we will definitely be back in the summer at which point hopefully the sun will be shining and the service may be a little bit more relaxed.

Posted by Bailey at 8:23 PM
Email ThisBlogThis!Share to TwitterShare to FacebookShare to Pinterest