Manchester is on the up.  There is no doubt about it, 2012 has seen more restaurants (and non restaurant food events/eateries) popping up left right and centre.  I imagine 2013 will continue this trend but there is one thing distinctly lacking in the food scene of Manchester when compared to other major cities in the UK and further afield.  Why don't we have our own regular street food market just like they do in that London?  We do have the local traders who want to do it like Fire & Salt BBQ, Dirty Dogs, Chaat Cart that are just as good as London's residents The Rib Man or Kimchi Cult. It seems the problem is not the food or the will to provide that food instead it seems to all be about how food markets and events are organised in Manchester. 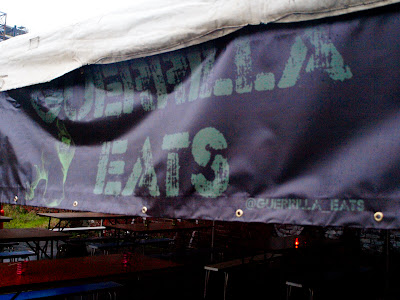 Don't get me wrong we do have food markets in Manchester but when we do they tend to be a little uninspiring and over priced.  We enjoyed the Manchester Picnic last year but it really was quite uneasy to see mega chain Nando's handing out its product for free and therefore doing over the truly independent traders who had already paid a hefty pitch price just to be there.  The event really feels like its purpose is to draw more people in to Manchester City Centre rather than advancing the potential for street food in Manchester by supporting the creative, hard working street food traders already in our midst.  That's where Guerilla Eats come in. 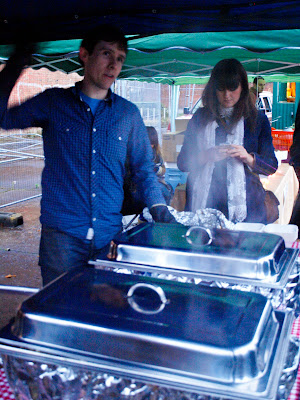 Masterminded by the chaps behind the aforementioned Fire & Salt BBQ and Dirty Dogs, Guerilla Eats is a co-operative of Manchester street food traders looking to escape the stress and costs of dealing with other more bland markets/events so that they can provide their foodstuffs to the good people of Manchester at a fair price alongside other like minded creative offerings.  And it really is a co-operative, a democracy where everybody pitches in and helps one another.  I like this approach, I really like it.  For me I can overlook rough edges, food mishaps and customer service hiccups if I believe that the people behind a restaurant or venture are genuine in their passion to deliver a great experience for their guests.  I absolutely believe that they are passionate about putting Manchester on the map when it comes to street food.  To be honest Guerilla Eats are already providing some of the best food in Manchester and although a Northern Quarter car park in the middle of a wet wet wet winter is not the most glamorous of locations they are already on their way to establishing the market atmosphere captured in the streets of London.  On to the food. 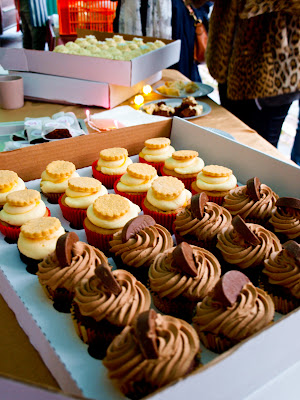 First taste of the day came from Sugar Bun Sisters.  I really am starting to think that maybe the whole dessert at the end idea might be all backwards, either way we have no issue with starting off one of these cupcake treats.  This was our first try of Sugar Bun Sisters and we were not disappointed, when other outlets tell me that they have made a Terry's Chocolate Orange cupcake what I expect is a standard cupcake that tastes sort of like a Terry's Chocolate Orange. 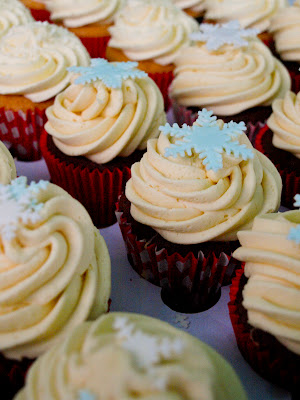 What Sugar Bun Sisters give you is a cupcake that tastes EXACTLY like a Terry's Chocolate Orange, these buns have got flavour by the bagful.  The range of flavours was pretty good too encompassing Baileys, vodka, apple custard as well as Guinness brownies among a few other bits and bobs. 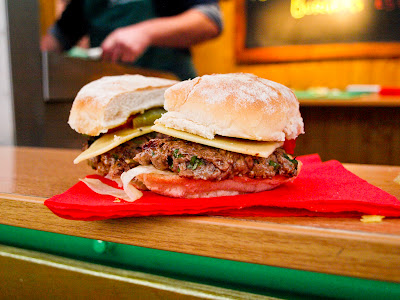 Next stop was The Barnhouse Bistro who I wasn't really familiar with which is surprising because as far as food carts go his is an eye catcher!  The food is simple and delicious, serving up 100% rump steak burgers with roasted peppers and horseradish mayonnaise.  The toppings and condiments really elevated this above your average burger, it made it taste so fresh, light and vibrant.  Could have easily eaten another one immediately. 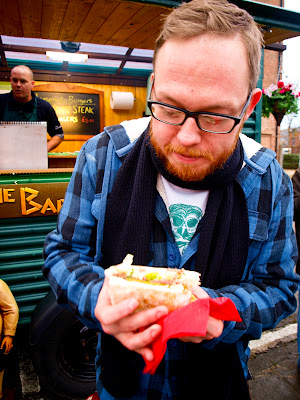 They also had very meaty neighbours in the form of Dirty Dogs.  We've written about them a few times before so you know that we know how much we like them.  Essentially nobody needs to write reviews of Dirty Dogs as all of the information you need to decide whether or not you want to eat one of their dogs is right there in the name.  Dirty.  Dogs.  Yes.  Please. 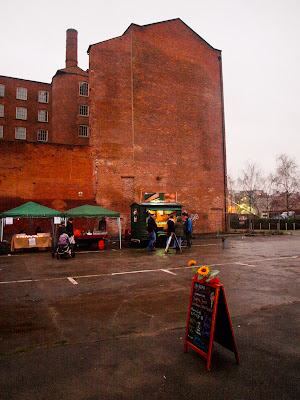 On to a more vegetarian friendly stall now and one we have been seen here there and everywhere, The Chaat Cart.  The idea is simple and probably the closest to 'real' street food available in the UK, honest authentic Indian street food (even the name means street food). 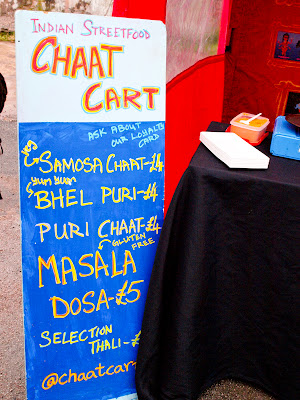 We tried a few things here and they all shared the same fresh and vibrant flavours.  The Masala Dosa was Jules' favourite item of the day - we had never eaten a dosa before and could never have imagined you could make such delicious, crispy pancakes out of rice and lentils. I also think you can tell how satisfyingly crunchy the samosas were just by looking at the picture... 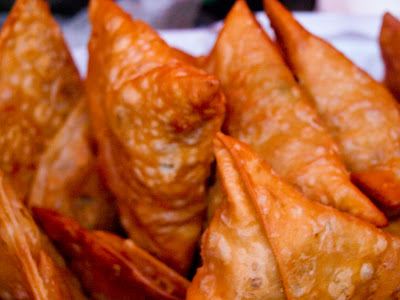 Just next door to Chaat Cart was Las Paelleras who deal in big big Spanish flavours rustled up in big big pans.  Obviously due to their name and their over sized cooking utensils it is not hard to guess that  Las Paelleras' main food on offer is the Spanish classic Paella. When we arrived it was just bubbling and sizzling away but we tasted their other option which was the chorizo sandwich. 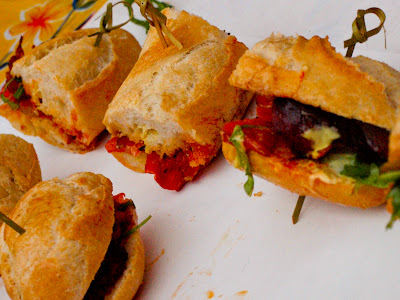 It transpired that this was not only a tasty option but also a very messy one, with each bite of the chewy fresh bread the generous filling slipped one way then another while I desperately tried to catch it with my napkin.  This wasn't a problem, I really do think continuing to find bits of meat in the cuffs of your jacket hours after eating is one of the key elements of street food culture. 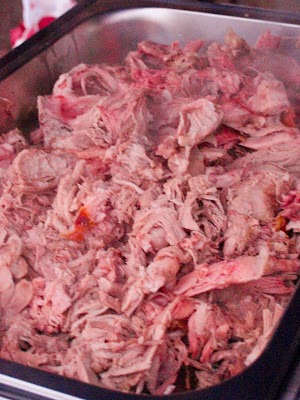 The next food isn't really street food, nope its more like back yard food but you shouldn't hold that against it because then you will be missing out on a very specially prepared pile of nosh.  Fire & Salt BBQ specialise in slow (and I mean very slow) BBQ'd pork, the time consuming and work intensive method results in what is the most moist and succulent pork you could ever imagine, a million miles away from the cremated pig corpses that are found just on the other side of town at the Christmas Markets.  While the Christmas Market pigs look like they have had a particularly unsuccessful re entry in to the earths atmosphere at high speeds, the pig on offer here has been treated with the utmost respect from farm to yard to street.  Whack on top of this a decent slab of mac n cheese and actually all that drizzle doesn't matter any more, it doesn't matter at all. 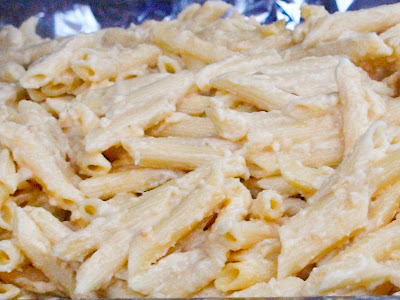 NEXT!  Remember what I said about dessert first earlier on?  Well I've had a better idea, why not have dessert at the beginning and the end?  Are you ready for my one line review of Ginger'sComfort Emporium's ice cream?  THEIR 'CHORLTON CRACK' IS THE BEST ICE CREAM I HAVE EVER TASTED. 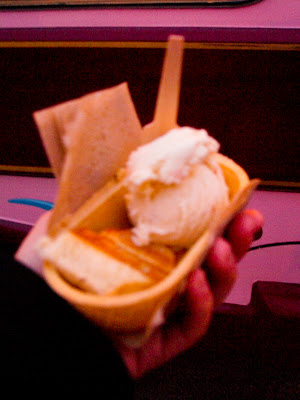 I even tried to obtain a tub of Chorlton Crack for Christmas, it didn't work out well but I still dream that I might one day be able to sit down with a full tub and eat myself in to a dairy based coma. Jules loved the ice cream (she went for Whiskey and Marmalade) but I think she may well have been a little bit more in love with the interior of the vintage ice cream van... 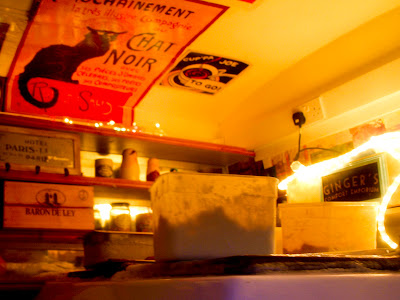 So what did I like about Guerilla Eats?  I liked all the food, I liked all the people running the stalls/carts, I liked their obvious passion for food and building up the street food scene, I actually really liked the disused car park setting (it fits with the DIY/punk attitude to selling food) and I liked the communal eating area they had set up which is sometimes overlooked at food events of all kinds. 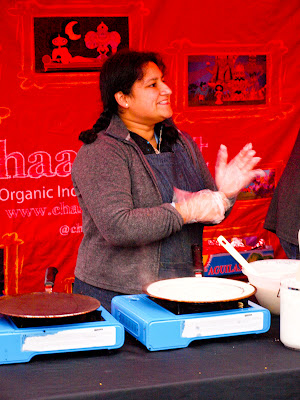 What didn't I like?  Well it seems that the only things that I didn't like were elements that either Guerilla Eats will get better at or will always be at odds with.  For evening events like this it would be great to be able to get a beer but I am guessing this opens up a huge can of worms when it comes to licensing and the organising of the event.  I would also say it would be lovely to see the prices come down just a touch more so they really are blowing the Christmas Markets and similar bigger honchos out of the water but I'm not sure that is even possible working with relatively small numbers of units of sometimes very specialised foods.  And finally the one thing that I didn't really enjoy is that there was a bit of drizzle and I honestly think that the weather will be the biggest obstacle to their success, they have everything else in the bag but if God decides its going to rain on every day they want to put on a market then they will struggle.  That said I would implore everybody to get out to the next one come rain or shine because you will not be disappointed, the food is amazing and the people involved should be supported in their efforts to bring Manchester up to speed with the rest of the street food world.  I will be doing everything I can to help them do something special and you should too.

Posted by Bailey at 6:30 PM
Email ThisBlogThis!Share to TwitterShare to FacebookShare to Pinterest