On Monday I was back in the motherland (snowy Sheffield) for a course, the perfect opportunity to grab a bite to eat with my parents. On meeting up with my mum she was saying that she wanted to eat somewhere "old fashioned where you know what you're going to get". She suggested we hit old favourite Mama's & Leonie's. 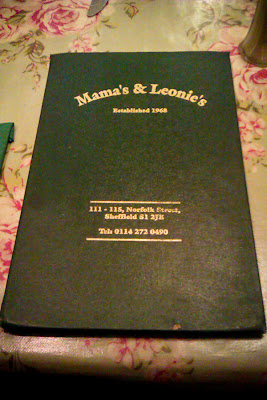 Mama's & Leonie's is a bit of a Sheffield institution. Apparently it was Sheffield's first Italian restaurant - opened in 1968 (my dad told us he remembers going when it first opened) and still going strong in 2013, but I doubt it's too different now than it was then! It has a fairly charming Italian / American sort of vibe and kind of reminds me of the type of place you would see Tony Soprano popping down to for a plate of pasta and a 'business' meeting.

Now I know that this all seems very retro and although I LOVE retro Italian restaurants I really didn't think that many people would still be into this - surely the folk of Sheffield have moved onto pastures anew and have found other trendier, more up-to-date places to eat? ... It would appear not. Early on a snowy Monday night, middle of January, middle of a recession, Mama's & Leonie's were doing a roaring trade with both floors packed with people.

Part of the appeal of Mama's & Leonie's is no doubt, to use my mum's words that you "know what you're going to get". The menu has barely changed in my 6 year absence and I could picture most of the dishes in my mind's eye from times past as I looked at the options.


One thing Mama's and Leonie's is known for around Sheff for is its intimidatingly large salads that come with this brilliant salad dressing. No sooner did I see the ladies next to me get their huge jug of salad dressing put down on the table in front them I realised this must still be the case, so me and mum decided we were definitely going to treat ourselves to a large one to share with our dinner. 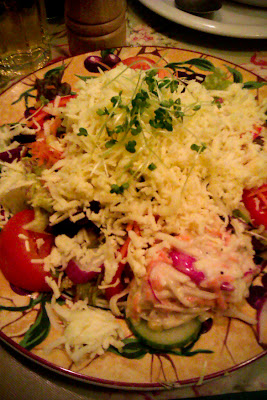 Despite me saying earlier that the salads are intimidatingly large, me and my mum couldn't get enough of ours as soon as it arrived, my dad then got salad envy so joined in and it wasn't long before we wolfed it down. We had enjoyed that one so much that we only went and ordered another one which we also wolfed. My mum pointed out there was nothing particularly special about our salad - it was basically salad with some creamy coleslaw and a lot of cheddar on top (not forgetting the lovely thick, mustardy dressing) but it was darned tasty.

I also ate a massive portion of Spaghetti Napolitana which was a great dish to set me up for a train journey on a winter's night. The sauce was rich and tasty although very sweet - possibly too sweet for some peoples' tastes - and the pasta was well cooked. 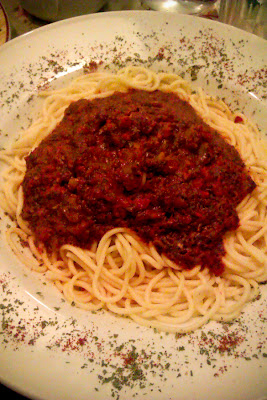 My mum decided on a Vegetable Lasagne which was an example of retro Italian dining at its finest (complete with the warning from the waitress about the dish being hot). Aída was very pleased with her choice and was very keen for me to make sure I wrote on my blog that she was very pleased that the food was old fashioned. 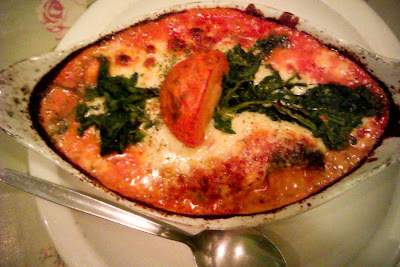 As soon as I'd called my dad at work to let him know our chosen dining venue for the evening, he'd become very excited and had apparently been licking his lips on the drive over at the prospect of eating another of the old favourites, the Vegetable Burger. Incidentally I remember very clearly eating this exact meal on one of my first meals out as a 'grown up' (i.e. without any parents there). Me and my friend felt very mature as we sat at the bar and I remember covering the entire thing with the sweetcorn relish that they give you. Well, like father like daughter, Dad got stuck right into that sweetcorn relish which Mama's & Leonie's are still serving with pride. Roy said his burger was ace as were the chips (and relish) but I reckon they could have done a bit better with that burger bun! 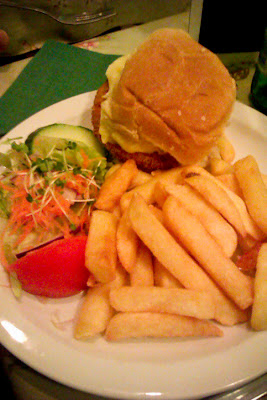 We had a lovely time at Mama's & Leonie's and it really was a trip down memory lane for me. I really am surprised that the place is still exactly the same including the menu, I am guessing they have a lot of regular customers who like it just the way it is. Service was very friendly and the atmosphere in the restaurant was very nice - although a bit squished we didn't mind and even had a nice chat with the ladies next to us. My dad was saying that a lot of people eat there before going to the theatre and that you often see a lot of the actors too (my mum started saying that she'd seen a "really famous actor" in Mama's & Leonie's once. I asked if it was Dominic West, she said no, then I forgot to ask who it actually was). Anyway, I was glad to see one of Sheffield's oldest eateries is still going strong, Bailey was very jealous that he missed out, especially as we went there after our first Christmas shopping trip together as a couple - however I'm sure next time we go back it will still be the same even if we leave it another 6 years!

Posted by Jules at 5:59 PM
Email ThisBlogThis!Share to TwitterShare to FacebookShare to Pinterest