Last Saturday brought us to Levenshulme on a very sunny day. We had heard about Trove Foods opposite Levenshulme Antiques Village and thought it looked like the most lovely little place, so even though we had an appointment at 11am and it was gone 10:20, we decided to pop in to sort out our rumbling tums. 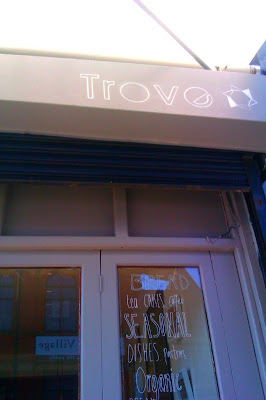 First thing we saw when we walked in was some of the most awesome baked items including cakes, tarts and bread whose crusts you could spot from a mile off. First thought to myself: 'Get yourself some of that bread Morris.' 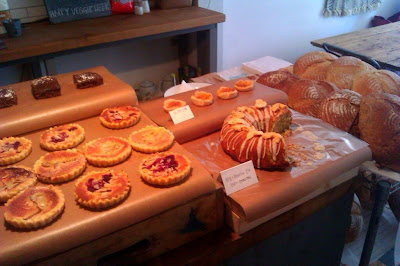 As it was National Veggie Week all the specials were veggie so I had loads to choose from. We decided to sit outside as it was such a sunny day, before we realised how very windy it was. Out of principle we were unwilling to budge so had quite a windy breakfast, not going to complain though. 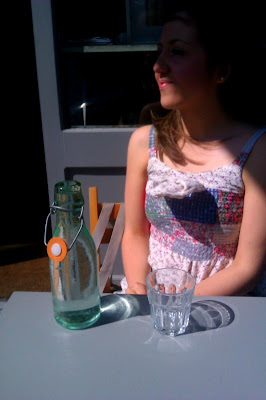 Our drinks arrived promptly and I was so impressed by the little touches the folk at Trove had thought of. First of all there was the lovely little picture of the Trove bread delivery van on my (very nice and frothy) cappuccino in chocolate sprinkles (even though Bailey had to explain to me what it was. I said "Is it a cat?"), then there was the cucumber ice cubes in Bailey's delicious pressed apple juice. Call me sad but I really appreciate things like that.

It wasn't long before we suddenly realised how fine we had cut it and we were only 10 minutes away from our appointment. Poor time management on our behalf! Luckily the breakfast arrived in time but it meant we really had to wolf it down.

I had ordered the Spring Greens with Poached Egg with a side order of their amazing multigrain toast. As soon as it arrived, Bailey had instant toast envy so because I am an excellent girlfriend, I let Bailey have one of my slices. They were massive slices anyway. 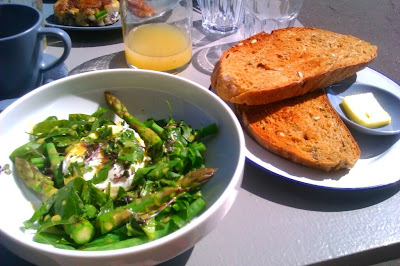 My breakfast, although eaten at a high velocity, was seriously... amazing. The spring greens were tossed with crunchy asparagus and green beans that took me right back to being a child and eating my nan's runner beans grown in her garden. The dressing on the greens was zingy and delicious and my egg was perfectly cooked. I was really glad I got the toast as seriously, this is the first bread I've had in Manchester that could rival the Barbakan. Seriously gutted we didn't have time to pop back in later to get a loaf but we ran out of time. We did see the Trove stall at Levy Market later that day but they'd unsurprisingly sold right out of bread! 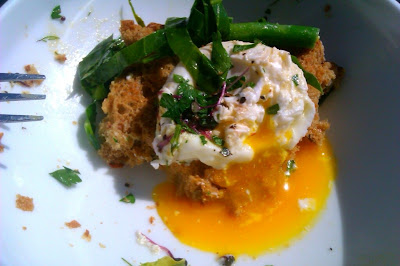 Bailey ordered the Bacon and Egg with Black Pudding Potato Cake which came with a chunky homemade ketchup. Of course he had my fit bread to mop it all up with too. He loved his perfectly fried egg and crispy bacon (Bailey loves it when the fat is all crispy) but once again he forgot that he doesn't really like black pudding and thought his potato cake was a bit too soft. The chunky ketchup was lovely and sweet and I tried to polish off the bit he'd left but Bailey reminded me we simply didn't have time to sit and polish off scraps of ketchup. Damn. Next time... 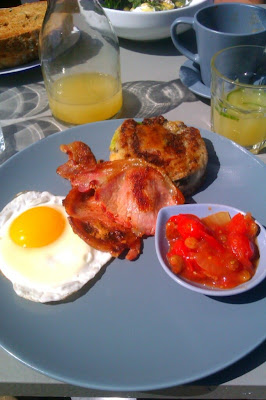 Unfortunately as soon as we finished eating we had to run away from our table at great speed. I was quite concerned that onlookers would think we were doing a runner. Plus it meant we didn't have time to do all the relaxing breakfasty things like scooping out cappuccino froth into mouth with teaspoon. Never mind, we'll just have to get there earlier next time. And there will be a next time - we thought Trove was fantastic and I am definitely going to start buying my weekend bread from there. A wonderful breakfast! 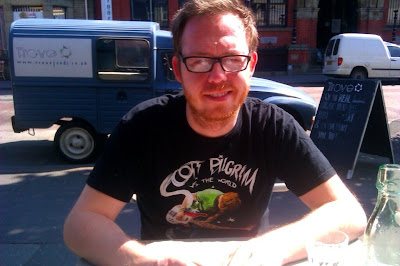 Posted by Jules at 7:14 AM
Email ThisBlogThis!Share to TwitterShare to FacebookShare to Pinterest