I have Twitter to thank for many things. Not only does it mean I am never not entertained, I have found out about loads of great local foodie events from it, which can only be a great thing. Recently I was reunited with an old friend - something that would almost certainly never have happened had it not been for Twitter. It turned out my old work friend (actually she was my boss) Beth from The Body Shop in Nottingham was a reader of the blog and had also been having some Twitter chats with Jeni! What a coincidence.

So without further ado we arranged to meet up and bring the other halves with us and we had a great time! It was sort of just like old times, except we were more sensible which can only be a good thing judging by some of the stories we reminisced about. 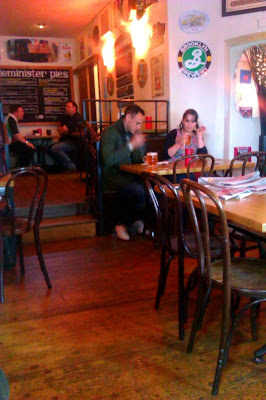 The chosen venue was Pi on Manchester Road, a place I know is very popular with the Chorltonites and that I've wanted to visit since I heard about their delicious pies.

It didn't take me long to realise that I had made a grave error in bringing the car because the tasty pies are not the only draw of Pi, they also have a very good selection of good quality booze. Now I am not a beer drinker but since our visit to BrewDog and all this talk of lovely beers, I've started to feel a little left out, and I especially did during our visit to Pi as it turned out that Beth and her lovely fella Dave are great connoisseurs of good beers and I know I would have enjoyed trying a few choice pints with them. Oh well, next time! Bailey however had a whale of a time trying loads of different beers, he said afterwards "The beers were brilliant. I haven't enjoyed trying different beers so much since I used to go to North Bar in Leeds". Here is one that had a pretty bottle. 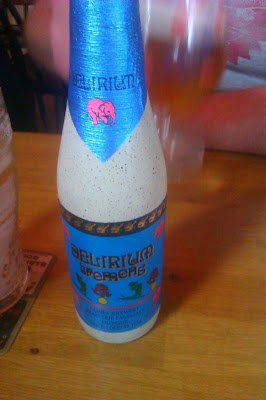 Anyway, onto the food! Pi lives up to its name in that it only sells pies, with pie sides of peas, mash and veggie gravy. Very good as there aren't many people who don't like a good pie. As Beth rightly said "It's better to do one thing and do it well". The pies at Pi are supplied by Pieminster, who I'd heard a lot about but had never had the pleasure of trying.

I decided to order the Heidi Pie which contained goat's cheese, sweet potato, spinach, red onion and roasted garlic - as if someone had invented my dream pie just for me. 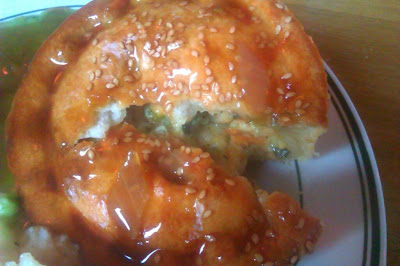 It was an excellent pie, I was quite surprised to see it had sesame seeds on top but they were lovely, and the pie filling was delicious. My only complaint would be I was expecting the pie crust to be a bit shorter and the filling wasn't quite goats cheesy enough for me. Still marvelous though. Being the glutton that I am I went for every side option going - peas, mash and veggie gravy which were all fab. Lovely smooth mash, not too sticky, not too grainy. 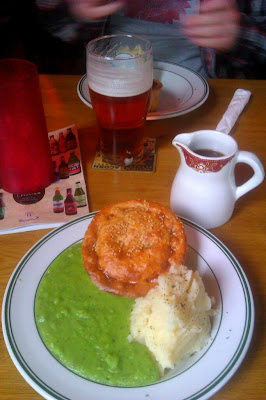 Bailey was very happy with his Moo Pie containing British beef steak, real ale, fresh herbs and gravy, and said that the beef was great quality. He did get some pea envy, so I very kindly and selflessly donated some of my peas to his cause. He said afterwards, having ordered his own peas "would have made it amazing." 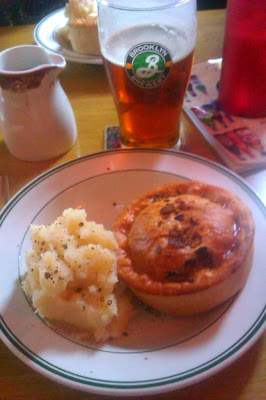 We had a lovely time at Pi and thought it was the perfect place to spend a Sunday afternoon - particularly as it was bank holiday weekend which meant Bailey could take full advantage of the beers. The food was just what you would want for a chilled out Sunday lunch, the drinks were ace and the atmosphere of the place was relaxed and friendly. I will definitely be returning and bringing more beer and pie-loving friends to try the place out.

Posted by Jules at 9:11 AM
Email ThisBlogThis!Share to TwitterShare to FacebookShare to Pinterest