Last weekend we received an invitation from our buddies Rob and Rachel to go out for dinner at EastZEast to celebrate their birthdays. There was a big gang going so we knew it was going to be a lot of fun and EastZEast has been reccomended to us so many times ("best curry in Manchester" has been said) so we were doubly excited. 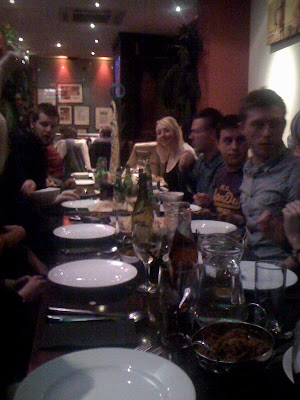 On arrival at the restaurant we had a lovely welcome from the staff and were shown to our table where everybody else was already tucking in to poppodoms and pickles as we were running a little late (as usual). The pickles were a real treat, very different to the standard array. This delicious tray featured a few different twists on the expected pickles but the favourite had to be the plum chutney, super sweet and tasty. 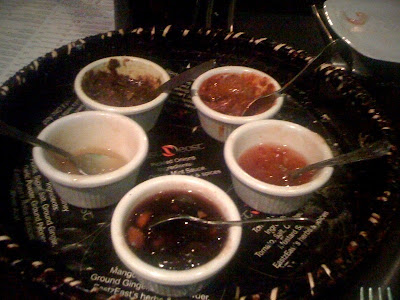 Everything was going great until the waiter arrived to take the order. The waiter made his way down the table taking everybody's choice of main course and telling us that rice and naan bread were being ordered for the table as a whole. I was a bit confused and disappointed that I wasn't going to get to choose the dishes that I wanted but I just thought it must be a system that works. Then the waiter returned to the other end of the table to chat with somebody else about the naans and rices where there was clearly more confusion. The waiter returned to our end of the table and started taking orders for rice and naan but beacuse I'd tried to order these before he told me that he knew what I wanted. The end result was that it took around 20 minutes to take our order and I wasn't confident that I was going to receive the right dishes. To be honest this feeling of unease and confusion ran throughout the entire restaurant with waiters and management running around looking stressed. This did not lend itself to a very relaxed eating environment! Anyway it didn't matter did it because the food was going to be brilliant. 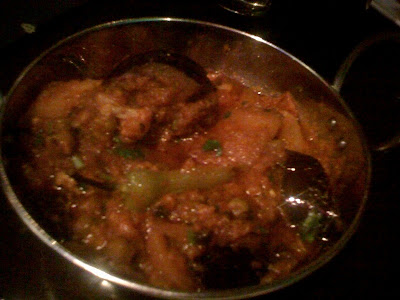 Jules went for the Karahi Mix Sabsi, boiled rice and salad and I went for the Karahi Murgh with boiled rice and a garlic naan. There was quite a wait on the food, probably around 30-40 minutes, but it didn't really matter as we were enjoying having a drink and a natter with our friends. When the food for the entire table finally arrived more confusion began with multiple waiters shouting out the names of the dishes and delivering them to the hopefully correct guest. Again it just wasn't done in a very calm way and we really had to strain to hear what was being shouted out. When our dishes were placed in front of us the first thing you noticed was that they weren't very hot. One of our friends ordered the Chicken Shashlik 'Special Sizzler' that failed to emit even one sizzle. But it wasn't the end of the world because we knew the food was going to be super tasty right? 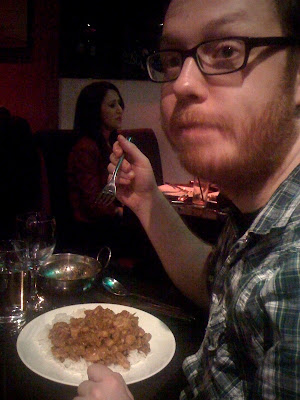 My curry was okay. It wasn't amazing but it was pretty good, a nice sweet blend of flavours and well cooked ingredients but no real punch of heat. Jules was much more impressed with the flavour of hers but the aubergine and potato were undercooked. There are few food crimes worse than undercooking aubergine. The rice was also luke warm and actually tasted claggy, like microwaved rice that has been irradiated for a little bit too long. The one brilliant thing that I tasted that I couldn't get enough of was the garlic naan bread. It was absolutely brilliant, light and crispy on the outside and a rich buttery garlic flavour. I would have to say it was probably the best naan bread I have ever had. 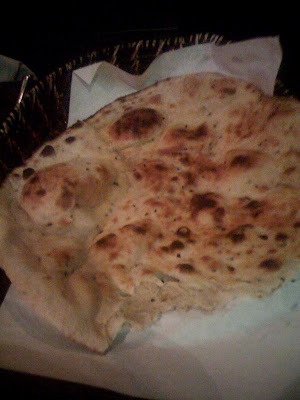 Again I would say we were dissappointed with the food and the service up to this point but we were still having a great time with our friends! 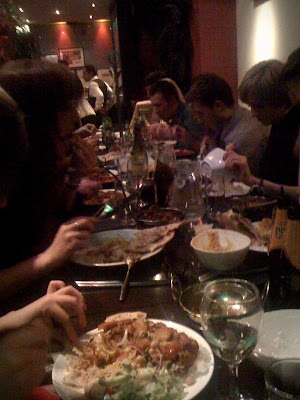 As soon we finished the meal the waiters descended to clear the table of plates and food as you would expect. What I didn't expect was that five minutes after the table had been cleared while we were still enjoying a near full bottle of wine would we be asked to surrender our table. The waiter told us they needed the table and that we would have to scooch up and all fit onto the remaining 3 tables. Out of politeness we began to start to ask people to move down and we began the scooching process. Within about 5 seconds it became perfectly clear that no more room could be made to accomodate the 5 people sat on our table so when the waiter returned to claim the table I let him know it wasn't going to work. He looked at me exasperated, threw his hands in the air and rushed off to speak to the manager. We returned to trying to enjoy our wine but this was pretty difficult with the waiting staff and management scowling at our every move. At this point the manager came over accompanied by the original waiter by her side and with her best smile asked if I could "do her a favour" and move up so they could have the table. At this point I was a little annoyed and let her know that it was impossible and that I had already been asked this to which she replied "sorry I wasn't aware you had already been asked". Harumph.

It has to be said that despite the mediocre food and the terrible service we still had a brilliant time! I'm not sure why everything went so badly for EastZEast on the night, I had heard such brilliant things, maybe they just struggle with larger tables. Whatever the reason for the poor organisation there are never any excuses for poor service and so we won't be going back when there are so many other great restaurants in Manchester who are putting the effort in. 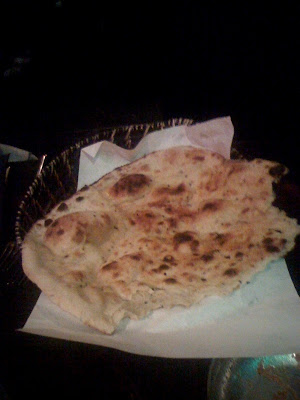 Posted by Bailey at 12:44 PM
Email ThisBlogThis!Share to TwitterShare to FacebookShare to Pinterest