After the excellent results following last weekend's farm shop adventure, Bailey and I have pledged to buy goodies from farm shops whenever possible. This coincides nicely with our pledge to go out for more countryside walks. I had heard that Uppermill in Saddleworth was a particularly quaint little place, nestled in the hills, so yesterday Bailey, Charlie and I went there for a mooch around the many tea shops and a stroll around the surrounding countryside. I decided on a "fool proof" route before going, with a stop off at the awesome sounding Albion Farm Shop for a spot of free-range lunch. 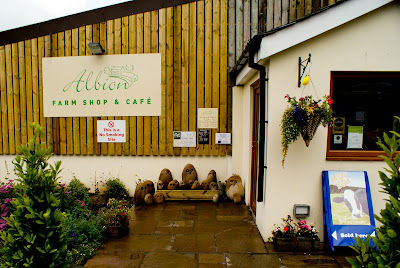 Despite the fact that it was absolutely pissing it down with rain, we pressed on with our walk, happy in the knowledge that in a mere 1.8 miles' time, we would be sat in a lovely farm shop café with a delicious meal... However, things didn't quite go to plan there, and a wrong turn thanks to dodgy iPhone Google maps meant we were taken an extra FIVE miles (UPHILL I might add!) out of our way!

Don't get me wrong, it was a lovely walk and I must say Saddleworth is beautiful but... our resistance was pushed to the limit as we wandered around country lanes, desperate for a glimpse of Albion Farm Shop... ANY farm shop! We were rained on for what must have been more than half of the walk and I know I felt like giving up on several occasions but the thought of the "home baked bread" I had read about on the website and a nice hot cuppa kept me going until that glorious moment when finally, we turned a corner to see a sign saying  "Albion Farm Shop" next to a rather intriguing makeshift model turkey. 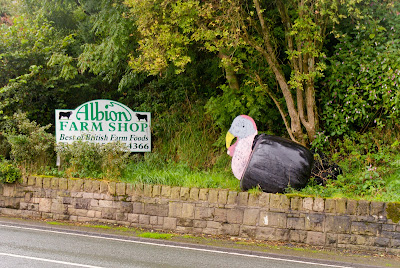 We gratefully rushed inside, taking only a few moments to marvel at how lovely the building was before finding the nearest window-side table (which had a lovely view of the surrounding countryside) and resting our weary legs. 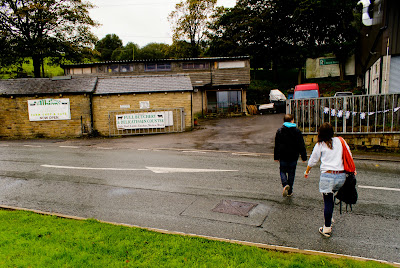 In spite of the fact that it was gone half past two, the café was pretty much full of people which we thought was a good sign, and the table of six ladies sharing three-tiered cake stands of delicious scones and fancies definitely caught our eye. 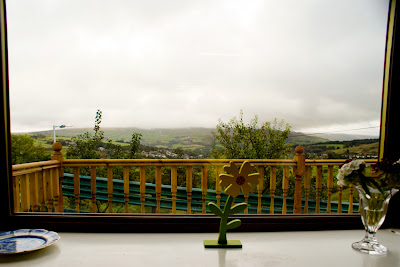 We ordered our lunches at the counter and were greeted by very friendly staff who actually seemed somewhat concerned for our health, seeing as we looked like a trio of drowned rats. 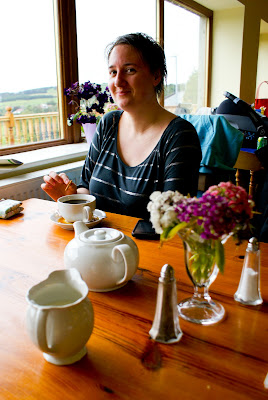 We got our hot drinks first which of course were pretty much the best hot drinks we had ever tasted, and they also gave us a super cute table number that was in the shape of a chicken. 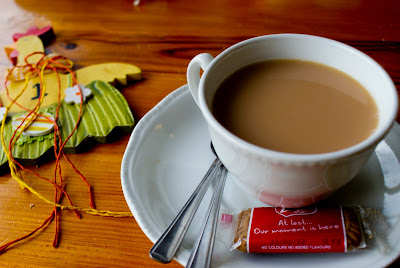 The service was excellent and the food arrived quickly after, although it was a bit annoying that Charlie's arrived a bit before mine and Bailey's, although after our epic walk in the rain we didn't begrudge her the opportunity to start her's before our's arrived. 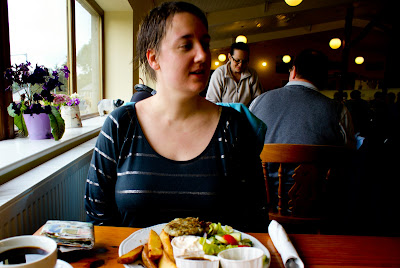 Charlie ordered a hot roast pork sandwich, which came with home-made jacket wedges, a big pile of stuffing, salad and coleslaw, gravy and apple sauce. She was really happy with her lunch, saying the meat was tasty and moist, not dry at all and really well cooked. Charlie said she would definitely be returning at a later date for another yummy farm shop meal. 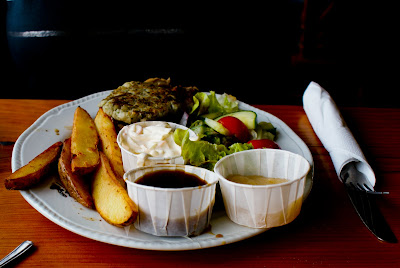 Bailey chose a hot roast chicken sandwich, which he had been looking forward to since he read the menu that morning. 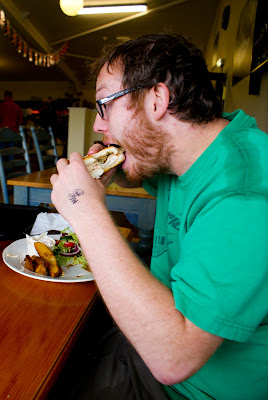 His sarnie was also served with all the trimmings and he really enjoyed it. He loved the home-baked oven-bottom muffin the sarnie was served on and said the meat was juicy and perfectly cooked. The chips were soft and delicious and the stuffing had just the right amount of onion in. The gravy was the perfect thickness for a sandwich as it didn't run off the sandwich onto the plate but wasn't too thick. 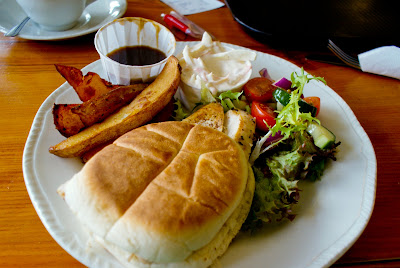 After our labour intensive uphill walk, I decided I had definitely earned a nice Ploughman's lunch. The description on the menu just sounded so yummy. 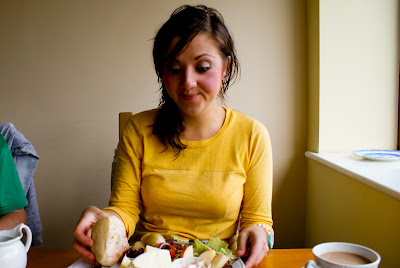 When my Ploughman's arrived I couldn't believe my eyes! When they said "Fountains of Gold Cheddar and Wensleydale" they weren't messing about! I couldn't wait to tuck into my mammoth-sized hunks of cheese. The salad was lovely and crispy with a flavoursome dressing. The apple slices and pickled onions, that seemed to have been pickled in a tasty Balsamic-style vinegar, were the perfect accompaniment to the cheese, especially when tucked into some home-baked bread with sweet onion chutney. It was such a big plate, it took me ages to eat which was rather nice. 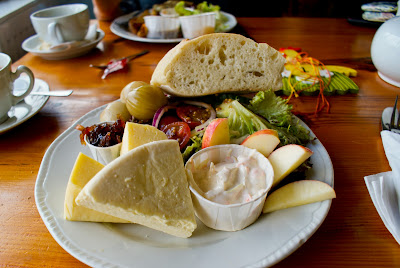 The one thing that did divide the three of us was the home-made coleslaw that Albion Farm seemed very proud of as it was on pretty much every plate on the menu, and was also on sale in the farm shop. For Charlie's tastes, the coleslaw was too runny. For me, I thought it was tasty but too creamy and a bit sickly. Bailey on the other hand loved it and couldn't get enough of the stuff.

Other than that though, we were all in agreement that Albion Farm Shop was an absolutely top-notch place to eat and we will all be returning there very soon, particularly as we now know how to actually get there. 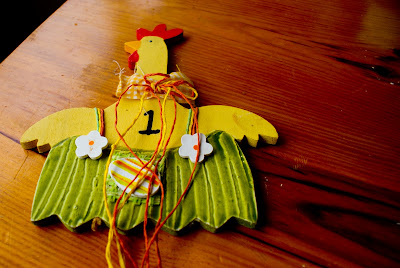 Not only was the food lovely but the views are an absolute treat and the cute traditional British interior makes for a relaxing place to eat on a Saturday afternoon. I can't wait to try out some of the other delights on the menu next time. What a gem! 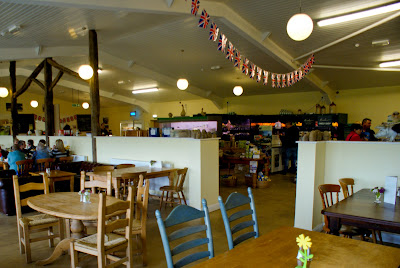 Posted by Jules at 9:30 AM
Email ThisBlogThis!Share to TwitterShare to FacebookShare to Pinterest