On Friday I celebrated my graduation from Manchester University School of Education for my PGCE course. Bailey and my parents came to watch my proud moment and afterwards we went to a Japanese restaurant we had never been to before called Samsi. Bailey was the one who found out about Samsi and suggested it, knowing I would be drawn in by its claims of being "one of the UK's healthiest restaurants". We had booked the table ages ago and were really looking forward to it. 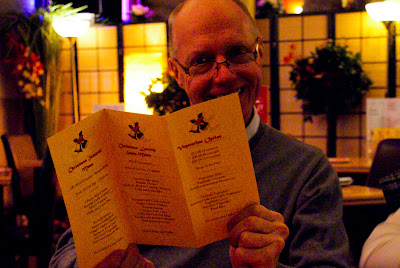 As it was (below) freezing cold at graduation, we decided to arrive at the restaurant an hour early at 5pm, so weren't surprised to find the place absolutely empty. Aída and I soon warmed up by ordering a pot of green tea which was amazing as it came in a really cute teapot and as it was made with green tea leaves tasted really nice. 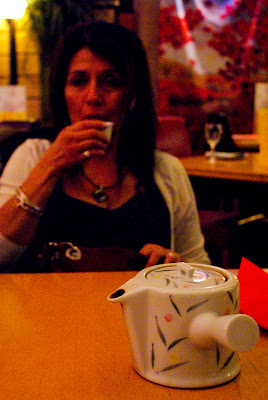 To help us recover from the cold we also ordered a round of Miso Soups alongside some grilled kebabs and tempura vegetables. 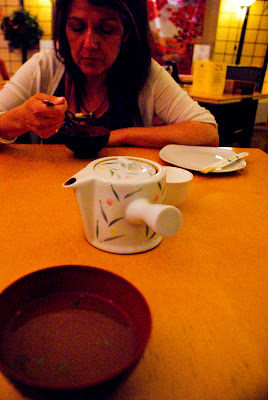 I had the grilled salmon kebab which arrived with some salad and teriyaki sauce. Both of my starters were really tasty, I really enjoyed the salty miso soup which warmed me up a treat after being out in the cold and the salmon kebab was delicious, as was the chicken kebab apparently, really fresh and perfectly cooked - crispy on the outside and soft in the middle. The tempura vegetables Bailey and my parents had were really crispy. 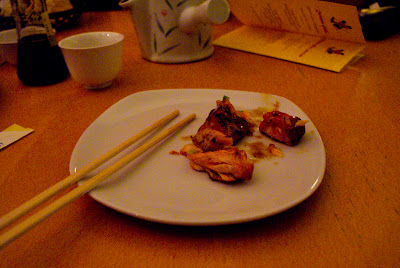 For my main course, I decided to be daring and go for a mixed platter of sushi- nigiri, sashimi and norimaki. It stated on the menu that this is never the same as they prepare the dish depending on what is fresh that day, which appealed to me!
This was only the third or fourth time I had tried sushi so wasn't sure exactly what to expect. However I'm really glad I went for the mixed platter as it gave me the chance to try a wide range of different things, particularly some of the ones I wouldn't have ordered.
When the sushi arrived I was really excited about the beautifully presented colourful dish before me. 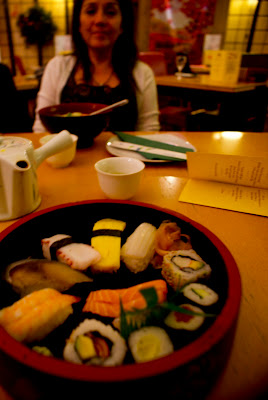 What made my dinner all the more exciting was that I wasn't really sure what anything was. Looking back at the sushi menu I *think* the nigiri sushi I had were prawn, mackerel, octopus, sweet egg and squid. I was a little bit frightened of the octopus and squid ones but actually the octopus one was delicious - even the texture. However the squid I was not so keen on and gave some to Aída (and she didn't like it either). That one was only for the bravest of sushi / seafood lovers! However the rest were delicious. I particularly liked the sweet egg sushi.
The salmon sashimi (sliced raw fish) was absolutely amazing and I think this was the restaurant's real test which it passed with flying colours. Amazing.
I think my favourite thing in the dish were the reverse maki rolls which had the rice on the outside as well as some tasty seeds. They were so flavoursome, I would definitely recommend these.
Also in the dish were some norimaki seaweed rolls which were also really tasty and perfect for vegetarians.
I would definitely order this platter again (but just request no squid please!) I really did enjoy every minute. Amazing!
All in all I am really happy that we chose to go to Samsi. There was a really nice atmosphere, great food, brilliant service and it felt very nice to go somewhere a bit different. Everyone else said their food was delicious and we all thoroughly enjoyed it. Can't wait to go back there! 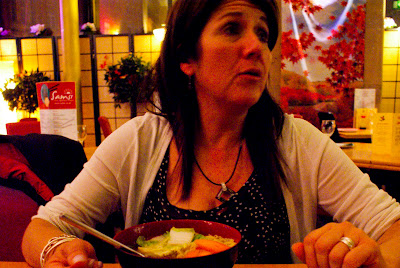 Posted by Jules at 12:51 PM
Email ThisBlogThis!Share to TwitterShare to FacebookShare to Pinterest