Hidden away on a random corner of the Northern Quarter, Bailey and I have often stumbled across Oklahoma Gift Shop and have had many a leisurely browse of the quirky gifts and novelty items on sale. We always noticed the strange little café that is situated to the side of the gift shop - almost part of the shop itself separated only by a few shelves. Despite noting that it is generally "full of hippies", have always meant to go in for a bite to eat. 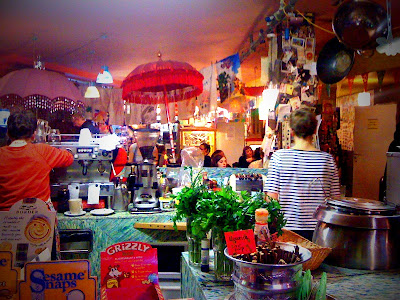 The other day the Oklahoma Café offered the perfect solution for our problem of being absolutely starving, tired of Christmas shopping and freezing cold. With barely a second glance at the menu we rushed inside to get ourselves warm.

Our first impression of the café was less than brilliant given that we sat ourselves down at a really shonky table which was barely safe to sit at with equally shonky chairs. Luckily we quickly relocated to another table and decided that it was all this dodgy furniture that helped give this café its unique character and the welcome feeling of sitting in a cool little bar in El Raval in Barcelona rather than boring old Manchester.

I was immediately intrigued by the chalkboard proclaiming that Oklahoma's baked sweet potatoes are "famous" and ordered one with organic baked beans, accompanied by a "Detox Tea". 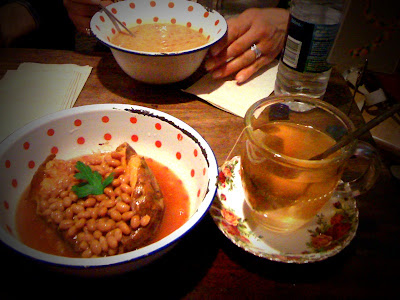 My potato arrived in a battered vintage polka dot bowl which I really liked, despite it making my potato quite difficult to eat. The potato actually surpassed my expectations - who would have thought a baked sweet potato could taste so good? Sweet and soft with tasty, crispy skin.... Delicious! Definitely something I will eat again. My tea was also really nice. I have no idea what a detox tea consists of but it was much nicer and sweeter than other herbal teas I've had in the past and certainly made me feel loads warmer and healthier.

Bailey opted for a mozzarella, basil and sun dried tomato toastie and asked me to order him a Diet Coke to go with it. Diet Coke? No such thing here! The only soft drinks on offer were organic fizzy and fruit drinks. So an Organic Cola was swiftly purchased for Bailey. 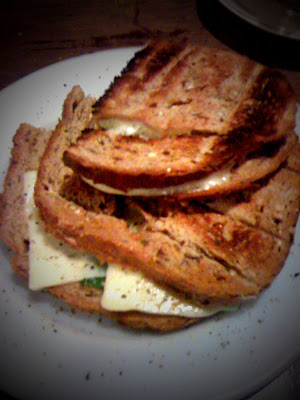 Bailey really enjoyed his toastie, despite it arriving with a piece of paper attached to the bread (when querying this with the waitress, she informed us that the bread they use comes with a sticker attached and that as a rule they don't peel them off before making the sarnies. Hmm). It was piping hot, filling and healthy with no complicated flavours. His Organic Cola was a hit too.

Lunch and drinks for four of us came to £14 which isn't too bad, but not dirt cheap either. I would say Oklahoma Café is an interesting place to stop by at, especially when teamed with a visit to its funky little shop. However, despite it having lots of cool stuff on sale, I wonder if its quirkiness would put some people off. If you like sitting at tables that don't wobble and like sandwiches without stickers on I would perhaps steer clear.

Posted by Jules at 10:11 PM
Email ThisBlogThis!Share to TwitterShare to FacebookShare to Pinterest