Having been told time and time again how difficult soufflés are to get right, I decided to rise to the challenge of making some yummy cheese ones for our dinner.

As it was my first attempt at making them, and I have seen countless episodes of Masterchef in which people's best attempts at soufflés are ripped to shreds, I had very low expectations.

The soufflés were at the very least dead fun to make: as you may know, I do enjoy making any dish in which the instruction "whisk to soft peaks" appears in the recipe, I was given the rare opportunity to use our lovely ramekins from Clas Ohlsen and they actually turned out a lot better than I hoped. 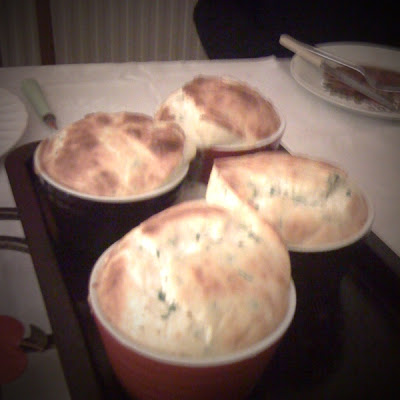 The soufflés were fluffy, cheesy and yummy and didn't collapse which was great. However, I think next time I have a bash at this recipe I will definitely leave them in the oven a little longer as they turned out a little runny, perhaps too runny even by John and Greg's standards. I think I was panicking quite a lot about overcooking the wee things but at the same time was worried about opening the oven door too many times to check on them and think I just served them before they were ready which was a shame.

Anyway, served with a leafy salad, perfectly cooked or not, these cheese soufflés were really rather scrummy. 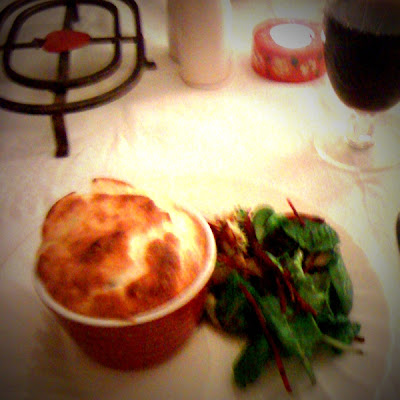 Oh, by the way, I apologise for the poor quality of the photos in this entry. All the panicking must have affected my ability to take a half decent photograph!

Preheat the oven to 200 degrees C. Grease the inside of the ramekins with the spread and a teaspoon of parmesan cheese for each and coat the sides evenly by rolling the cheese around. Separate the eggs and place the egg whites in a large mixing bowl. Place the egg yolks in a separate bowl with the fromage frais, quark, mustard powder, cayenne pepper and seasoning. Stir in the rest of the cheese. Whisk the mixture until it is combined and add the spring onion and parsley. Whisk the egg whites until stiff. Gradually fold the egg with a metal spoon. Spoon the mix into the four ramekins and place on a baking tray. Cook for 15-20 minutes until golden and risen. Serve immediately with a leafy salad. 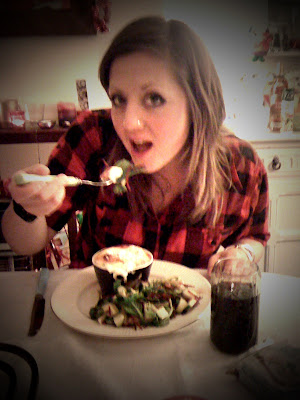 Posted by Jules at 9:55 AM
Email ThisBlogThis!Share to TwitterShare to FacebookShare to Pinterest