Bailey and I have just dined upon these Very Full Tartlets for our Sunday dinner. They are based on the recipe for Very Full Tart by my beloved Ottolenghi, which I have made loads of times for parties and barbecues, but today I really wanted to try out our new individual tart tins that we bought weeks ago.
The Very Full Tart features all my favourite ingredients including roast veg, feta, bayleaves and of course shortcrust pastry. I always use shop bought pastry (if it's good enough for Jamie Oliver it's good enough for me) which is very easy to roll out and prebake. 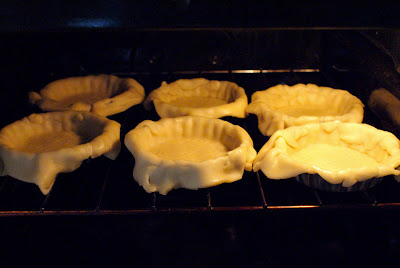 The pastry is stuffed full of yummy roasted veg and two types of cheese but still manages to taste quite fresh and healthy. 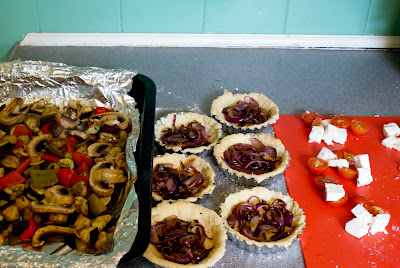 It's really fun to assemble the tartlets, dotting them with cherry tomatoes and cheese before baking. 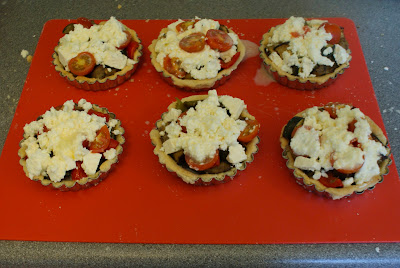 Today I decided to put the tarts with a rocket salad dressed with a pesto dressing - inspired by what I ate on my trip to the Metropolitan. I made the dressing by mixing green pesto, vinegar and oil and it turned out really nice, although when dressing the salad I think less is more if you don't want to drown out the flavour of the tarts. 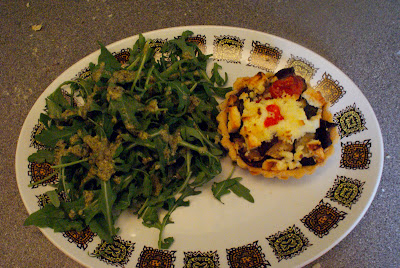 Although the tartlets were very nice, although compared to previously made Very Full Tarts I wasn't 100% convinced. The base of the tartlets were a little soft despite the sides being crisp. I'm not sure if this could be remedied by baking for longer or by adding less liquid. It could also be due to the fact that the original recipe requires you to mix an egg with cream but as we didn't have any, I used a splash of milk instead.

1 packet of shortcrust pastry
1 aubergine
1 courgette
1 pepper
5 mushrooms
A couple of pinches of thyme and parsley
1 medium onion
2 bayleaves
6 cherry tomatoes, halved
Half a block of feta, cubed
Half a tub of ricotta cheese
1 egg
A splash of milk (probably best to use cream instead though)

Roll out the pastry, put into buttered tart tins and prick with a fork. Cook in the oven at 200 degrees C until the pastry is browning. Cut up the aubergine, courgette and peppers and roast with some salt, pepper, thyme and parsley and roast in an oven dish. Once the roast veg in there start to get softer, add the mushrooms, roughly chopped. Meanwhile, fry the onions in a pan with the bayleaves. I think the bayleaves really make a difference to these tarts so make sure you do include them and cook the onions nice and slowly so they take in the flavour. Spread the onions on the bottom of the tartlets. Add a tablespoon of the roast veg on top. Add the cherry tomatoes then dot with the cubes of feta and little blobs of ricotta. Remember they are "very full" for a reason. Bake in the oven until the cheese is turning nice and toasty brown. Leave to cool for a few minutes so you can get them out of the tart tins more easily. Delicious! 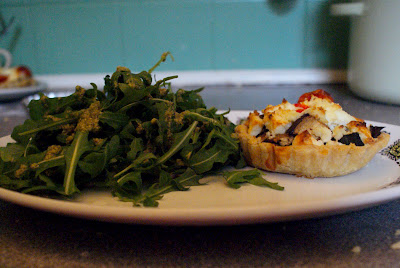 Posted by Jules at 8:29 PM
Email ThisBlogThis!Share to TwitterShare to FacebookShare to Pinterest