Last night we had Hannah, Gray and Paul over for a quiet Friday night dinner. We decided to go for a slightly Anglicised version of a classic Italian peasant pasta dish called Pizzoccheri with a rosemary focaccia. 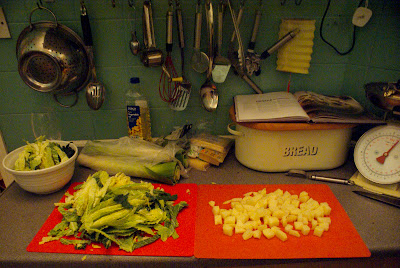 We can't really remember when we first came across the recipe for pizzoccheri but served it up for my family one boxing day lunchtime. It went down a storm, but this is the first time we had made it in nearly 2 years. The basic ingredients are savoy cabbage, leek, potatoes, pasta and a whole heap of butter and cheese. It might not sound appetising, but it is a really hearty, tasty meal. The original recipe contains Pizzoccheri buckwheat pasta, but I have never seen it in the shops and they certainly don't sell it in our local Asda so we used tagliatelle instead. 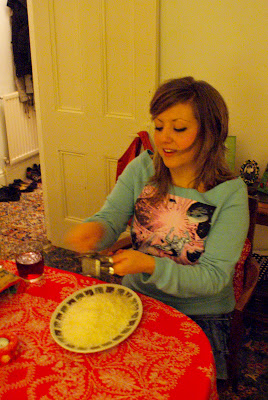 If at all possible, lay your hands on one of these great old school cheese graters. I picked mine up at a car boot sale and it made the task of finely grating a block of parmesan very simple. Making the Pizzoccheri id really easy. The key is not to throw away your water when boiling the veg: the potatoes are boiled in the same water as the cabbage which makes them snap up all their lovely flavours. The sauce is then made by frying the veg in melted butter before adding the two types of cheese. 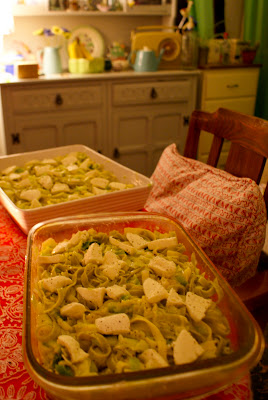 Boil the cabbage in salted water for 1 minute. Whip it out, but save the water. Boil the potatoes in the same water for 10 minutes before draining. Boil the pasta and lay in the bottom of an oven dish. Melt the butter in the biggest pan you can lay your hands on and gently fry the sage, cabbage, potatoes and leeks until soft and saucy. Add the cheeses to the mix and stir well. Transfer the sauce to the oven dish and mix into the pasta. Top with shredded mozzarella and bake in the oven until the mozzarella is toasted. 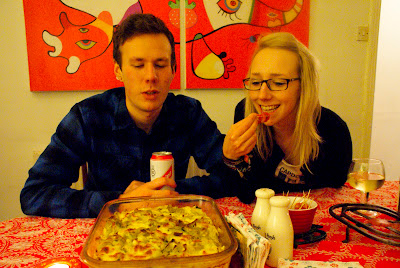 As an accompaniment, we decided to have a go at making a rosemary focaccia bread. It was actually really simple to make although it has to made well in advance to give it time to rise. In fact it was so simple that it created a further argument for throwing our rubbish Cookworks "bread" maker out of the window into the littered streets of Rusholme. 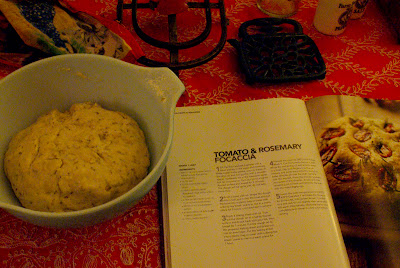 On top of the focaccia I added home-made "sun" blushed tomatoes which I made by putting a punnet of halved cherry tomatoes in the oven at 50 degrees C for about 6 hours. 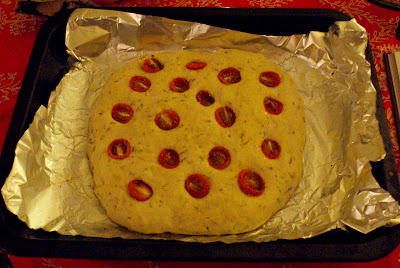 This was a good accopaniment as it countered the richness of the pizzocheri. I was nervous that it wouldn't cook through properly but a trick I picked up whilst watching The Great British Bake Off - knock on the bread and if it sounds hollow it's ready - paid off. It was nice and crusty on the outside and soft on the inside. 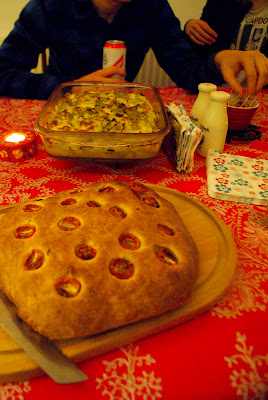 Sift the flour and salt together before stirring in the yeast and rosemary. Gradually add the olive oil, mixing with a wooden spoon. Gradually add the water but do not over mix. Turn out onto a floured surface and knead for 2 minutes. The dough should be quite wet. Brush a bowl with oil, put the dough in and cover with a damp tea towel. Leave for an hour to rise in a warm place. Brush a baking sheet with oil. Turn out the dough onto a floured surface and knead for 1 minute. Put the dough onto the baking sheet and shape. Cover with the damp tea towel again and leave for another hour. Preheat the oven to 240 degrees C. Dip your fingers into some oil and make dimples in the dough. Put the tomatoes in the dimples. Sprinkle with salt. Turn the oven down to 220 degrees C and bake the loaf for 20 minutes until golden. 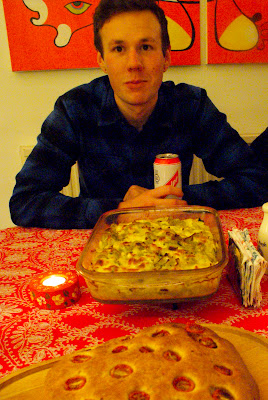