They say the way to a man's heart is through his stomach and while I'm not one to bandy sexist, old fashioned theories about, this one is actually very true of Bailey. Then again, Bailey has wooed me with many a dish himself so it clearly works with both genders. The other Sunday, Bailey most definitely deserved a treat as he had redefined the word "good'un" by spending his week looking after me while the inspectors were in at school, working hard to spruce up the garden for the nice weather and making me a variety of smoked barbecue foodstuffs. 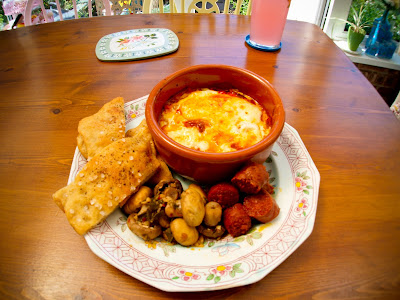 I'd been planning to cook him a "Spanish inspired" breakfast for some time after hearing him say that no breakfast could be made worse by adding chorizo. Having said that, I've always found breakfast in Spain to be fairly simple - the heartiest thing you're going to get your hands on is a tortilla sandwich. Although Spaniards may not take breakfast too seriously, me and Bailey certainly do and there are so many Spanish ingredients we love that could be put together to make a great brekkie. 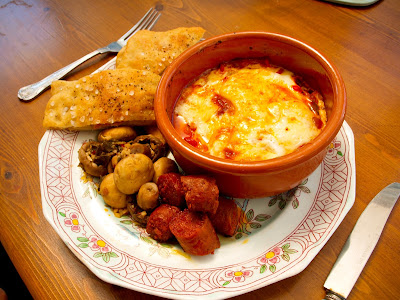 Apart from the initial idea, I can't say my Spanish Inspired breakfast was particularly original. The baked eggs you will notice are rather Ottolenghi-esque and the stuffed bread is an old favourite from my friend Iain. 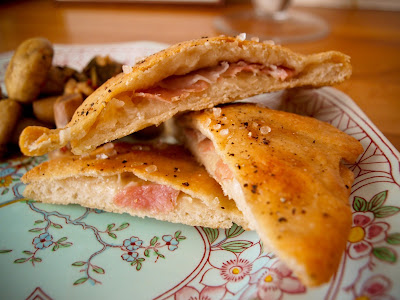 I also had some brand new Pimentón de la Vera hot smoked paprika that my fabulous friend Nat bought me from Épicerie Ludo and I was just dying to open, but seeing as we already had some inferior brands of smoked paprika already open in the pantry, I couldn't justify opening this bad boy for any old reason. Posh breakfast for Bailey however = the perfect excuse. It's amazing stuff by the way. Get yourself down Beech Road and pick up a pot. 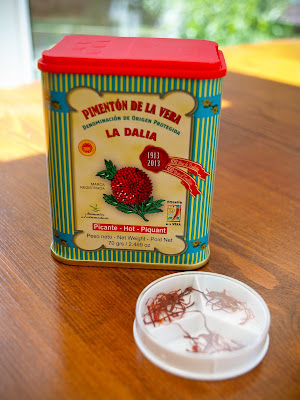 I was really pleased with how the breakfast turned out and Bailey said he really enjoyed having such a hearty meal to set him up for a day of wood fired oven building. Maybe we should change the old phrase to "the way to a person's heart is through chorizo..." 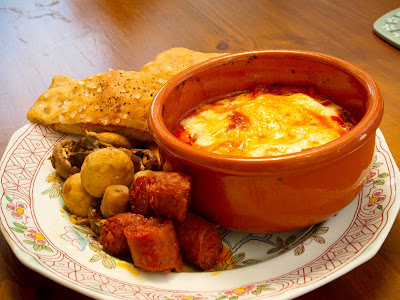 Recipe:
One half portion of Iain's Stuffed Bread, stuffed with 30g Queso Ibérico and 2 slices Jamón Serrano and topped with rock salt and black pepper

Start by preparing the half portion of bread as per the instructions in the blog post. Put to one side to rest. 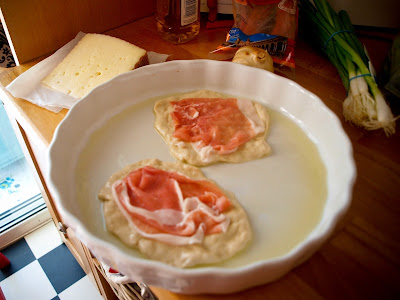 Meanwhile, roughly chop the garlic and spring onions and fry in a pan. De-seed and chop the peppers and add to the pan along with the spring onions and garlic. Add the bay leaves, saffron, paprika and sweetener and fry for about two minutes. 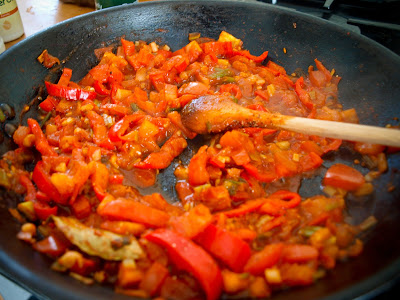 Add the bread to the oven at this point on the top shelf. Bake for around 20-25 minutes. 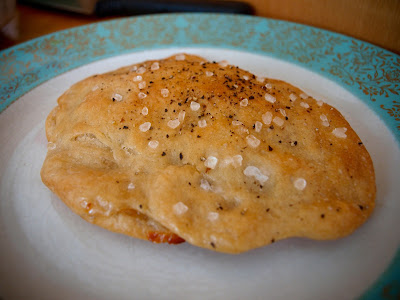 Chop the tomatoes and add to the pan with the rest of the ingredients. Squeeze the lemon juice in. Allow to cook over a very low heat for around 10 minutes or until the tomatoes are soft and the whole thing is nice and saucy. Take two large tapas dishes or large ramekins. Divide the paprika sauce between the two dishes. 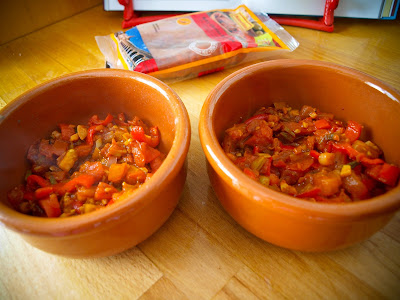 Using a teaspoon, make a little hole in the sauce on one side of the dish and crack one of the eggs into the space. Do the same on the other side of the dish. Repeat until both dishes contain two eggs. Place the dishes in the oven beneath the bread. The eggs will need about 10 minutes before having the cheese put on top. Take the bread out of the oven after it's been in 20 minutes. 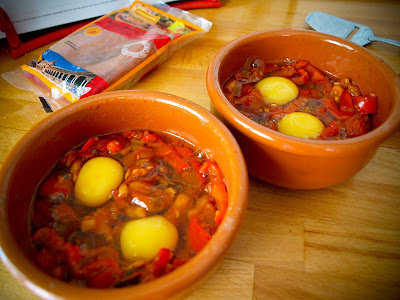 Now prepare the chorizo. Peel the skin off and chop into bitesize chunks. Heat the oil in the pan and fry the chorizo until lovely and crispy. 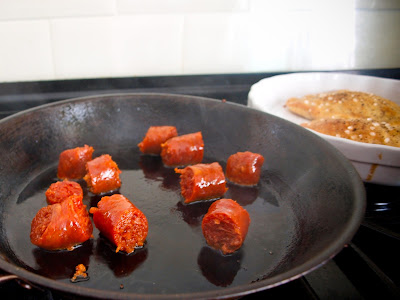 Meanwhile, prepare the mushrooms. Finely chop the garlic and fry off over a low heat for a few moments in a saucepan before adding the mushrooms. 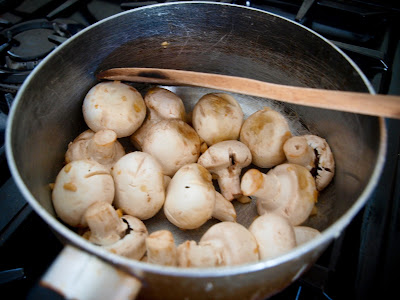 Chop the herbs and add to the pan with the mushrooms and squeeze in the lemon juice. Cook until soft. 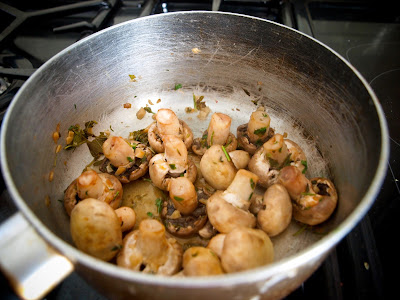 Take the Baked Eggs out of the oven and grate the cheese onto the top of them. Finish off with a pinch of paprika and place back in the oven until the cheese is melted. 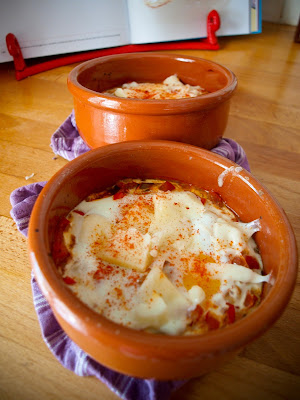 Arrange everything on the plate. If you like, spoon a little bit of the chorizo oil out of the pan onto the baked eggs! 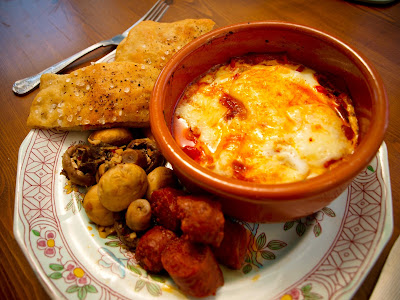 Posted by Jules at 12:11 PM
Email ThisBlogThis!Share to TwitterShare to FacebookShare to Pinterest