Living in Rusholme for three years and having the Curry Mile a stone's throw away, we were really spoilt for places to eat out (in case you're wondering, our favourite is Mughli). In fact, truthfully, I am bitterly regretful that we didn't take more advantage of it when we lived there, and now have to live vicariously through Manchester Foodies (who do make the most of where they live and have loads of great tips for you over on their blog). We will always love the Curry Mile but since moving to Levy we've been on the lookout for our new local favourites. 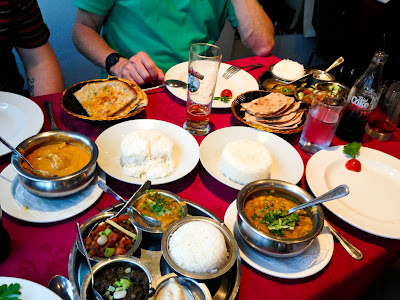 We've fallen head over heels for Sindhoor but that's actually in Burnaaage and not really in walking distance. Another obvious choice is Nawaab - officially the most imposing building on the A6, but we haven't visited as yet - I'm too scared of the entrance hall, it looks like the Overlook Hotel. I do really want to go though, as soon as we do you will be the first to know. 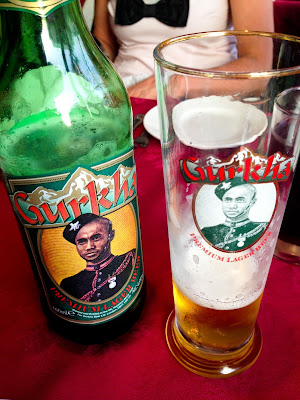 Where we've really struck gold though is New Himalayas Restaurant, bang opposite Nawaab but refusing to cower in its shadow. This place is an absolute treat. Our first visit there was one of the most fun times I've ever had in a restaurant and that was down not only to the food but to an amazing waiter who is simultaneously one of the most interesting and one of the most crackers people I have ever met (his topics of conversation included what he would do in the event of a meteor shower and which is the best country to buy a pair of Pepsi shoes...). He is brilliant. The rest of the staff are really nice too.

The menu is also ace. It is impossible to choose anything because all of the descriptions are written in such an enthusiastic way that you feel as if you simply could not resist ordering them. 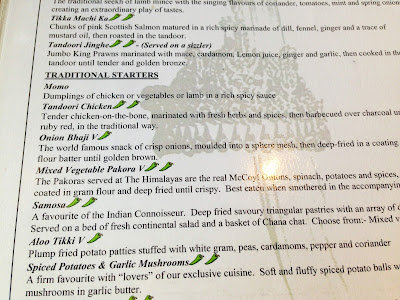 This particular occasion was our second visit and we had my parents with us. We were rather excited to order some tasty starters especially as we knew that, judging by how much we'd enjoyed them on our previous visit, Roy Morris was going to absolutely bloody love them. First up were the Vegetable Momo - a curious starter of spicy, chewy little Nepalese dumplings in a rich sauce. These remind Bailey and me of a cross between a potsticker and a samosa. 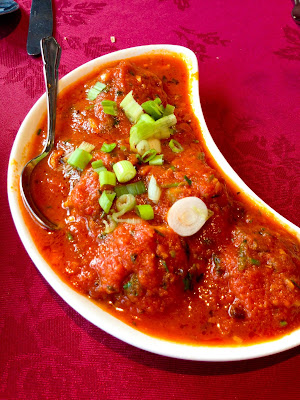 We also snapped up a portion of Mixed Vegetable Pakora, described by the menu as "The Real McCoy", these were crisp, light and tasty. 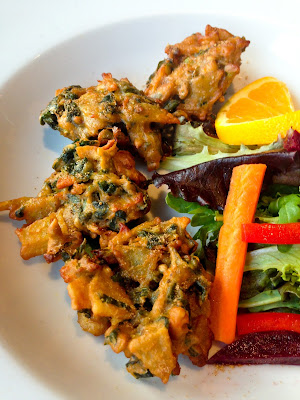 We followed the advice of the menu and 'smothered' our Pakora in the sauces provided; these were an absolute revelation. Roy loved the green chilli one and couldn't get enough. 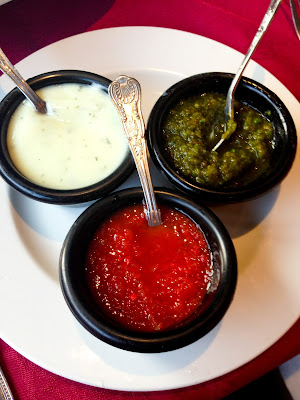 I usually try to avoid always having the same thing every time I go to a restaurant but there was no way I could resist revisiting the delights of the Vegetable Thali, especially as it comes with rice and roti -such good value. All three curries I got were lovely, my favourite was the spinach and paneer. A little different from last time was the yoghurt sauce I got which had some rather nice little gelatinous balls in it - maybe tapioca? Very unusual. 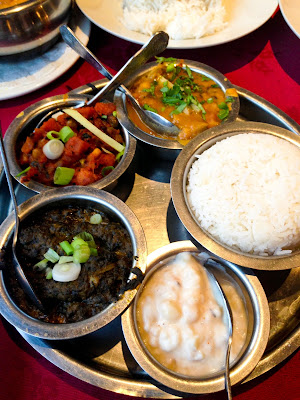 Hayfever-ridden Bailey was forced by his ailment to choose something he wouldn't normally - the Chooza Makhani, a mild and creamy chicken tikkia curry with tender meat and a sauce that was neither too creamy nor too rich. 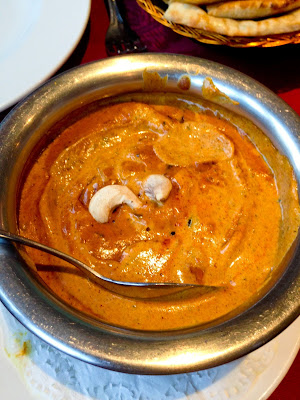 His Cheese and Garlic Naan was hot to the touch, crispy and packed a mean punch of garlic which meant it was the perfect partner to the simple Chooza Makhani. 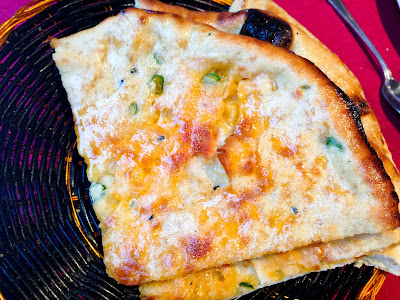 We left New Himalayas with full bellies and big smiles; food-wise this second visit was actually EVEN BETTER than the first. As our favourite waiter wasn't in, the service lacked the magic of last time but was still very efficient and friendly. We are so happy with our brand new local and will be sure to make the most of it this time. Being the kind souls that we are, we don't mind you coming and using our local too though, as long as you don't steal our waiter off us.

Posted by Jules at 5:49 PM
Email ThisBlogThis!Share to TwitterShare to FacebookShare to Pinterest