We've lived in Manchester for a few years now and one of the first pubs we randomly stumbled in to was Mr Thomas' Chop House.  It must have been something to do with the constant flow of gravy and roast meat smells they pump out in to the street.  We always really liked popping in to what surely must be one of the thinnest bar areas in Manchester to grab a beer but despite recommendations and said intoxicating fragrance we never got round to trying the food.  Skip forward a few years and Albert Square Chop House pops up and catches our eye but not our nose.  The place looked absolutely lovely from the street as you can see the hubbub of the upstairs bar as well as what appeared to be a cosy basement dining area.  Sadly they were keeping all of their food whiffs to themselves.  But it was on the list.  The venerable Pay Day Steak Day list.  Therefore we waited until our group decided to pay them a visit on whichever fateful pay day was chosen. Luckily the tension was broken when Manchester Confidential invited us to try their new Spring menu out.  It was an easy decision although we would not be partaking in steak as we would be returning for that pleasure. 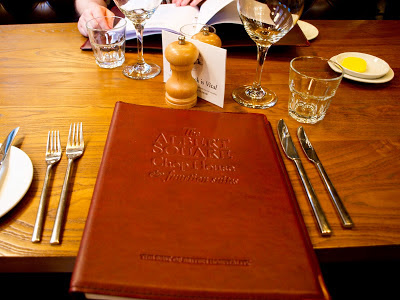 Albert Square Chop House is a British restaurant.  Thinking about it I should probably rephrase that.  Albert Square Chop House is a BRITISH restaurant.  There is no doubt about this, the menu from top to bottom is British (and where possible of the North West local variety).  Now I know there are people out there that might not think Britain could muster a decent menu from its own dishes and I must admit that I've been to 'English' restaurants that have roped in the mongrel, adopted 'English' dishes that are liberally borrowed from the French to fill their menu as well as chucking in a Tikka Masala for good luck.  That said, much like The Wig & Pen this place has got a strong idea and a passion to deliver that idea. 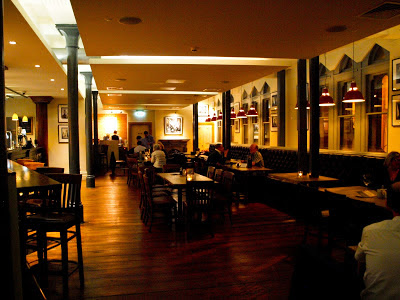 The location and building are a great start.  What a spot right on Albert Square with some grand steps and an elegant arch framing the entrance to the restaurant.  It is very nice to arrive in to the upstairs bar as straight away you are hit with the vibrant atmosphere.  We had just a moment to have a quick shufty at the cracking bar area (frill but no frills if that makes sense?) where everybody looked like they were having a great time.  After that moment a lovely lady greeted us and whisked us down to the lower dining area.  Call me weird but I find eating sub ground level quite relaxing.  Just re-read that, it is weird isn't it.  Anyway they have a highly visible kitchen which I always enjoy as well as a bunch of hefty booths.  The most eye catching element of the decor are the many photos of celebrity Mancunians which line the walls.  Don't forget this is a BRITISH restaurant.  They were great photos and a great bit of conversation is to be had identifying the rows of Mancs. 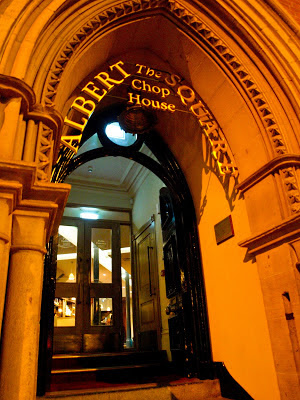 At this point I should say that absolutely bloody everybody we encountered over the night gave us the warmest welcome from the door host to the waiter to the sommelier (who we will return to later on).  As always you would expect this when you are invited to a restaurant but we kept our beedy eyes locked on every member of staff throughout the meal looking for a crack in their loveliness, perhaps they would carelessly poor boiling hot gravy over an elderly ladies face without an apology or perhaps kick a chair from underneath a sickly child's attempt to be seated with an arrogant sneer.  They did neither of these things, there were no cracks, the service elsewhere looked just as good as ours.  One of my favourite waiter traits is that ability to turn up just at the right moment, some people might call these people lucky but I do not believe that, it's all about anticipation and awareness of your tables and our gentlemen was bang on every time. 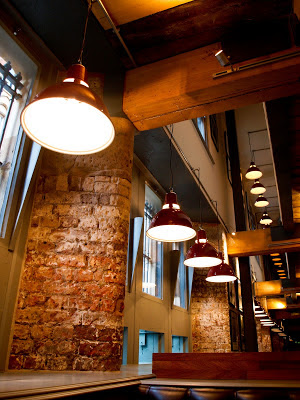 Knowing that I would be heading in to the main course for a good slab of meat I thought I would go for a light starter of celery soup with blue cheese and nettle dumplings.  That wasn't the only reason though, the secondary more evil reason was that we were having matched wines with each course and I was really interested in what would be paired for this tough match.  Sorry Mr Sommelier. The soup itself was really nice, good consistency with a rich flavour but not heavy at all.  It was a hearty little dish that suits Manchester's up and down Spring weather quite well, it certainly made me think that I should consider the soup as a starter more often.  I also forgot that it included the dumplings so they were a great surprise when I got to the bottom, very subtle flavours and also very light.  Mr Sommelier came through and his wine match was bang on. 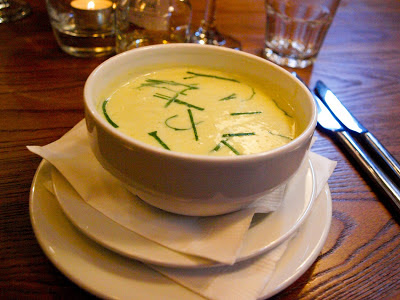 Jules went for the salmon which came accompanied by a herb mayo and pickled baby artichokes.  This was an extremely light starter with simple, fresh flavours bordering more on a Summer vibe than Spring but hey we all wish it was Summer don't we?  It was also exceedingly pretty.  At the same time fresh bread rolls were arriving at the table and they were an absolute delight, it must have been only moments from oven to table as they were piping hot and super soft.  Some people might think that they are a little on the small side but fret not gluttons there is a steady stream of them if required.  Oh and Mr Sommelier gave Jules the perfect wine to accompany it again. 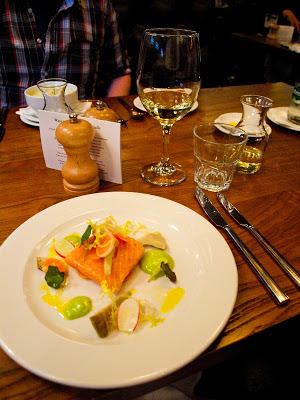 For the main I felt I had to go for the Spring lamb seen as though we were here to try the Spring menu surely I had to pick the item that had Spring in the name.  As soon as I saw it I knew it was perfectly cooked.  This was far and away one of the best lamb dishes I have ever eaten, a dish that is so easily destroyed by a pub chef knocking it out on a late Sunday afternoon had been treated with such care it was amazing.  Sometimes people say that they have eaten meat that is melt in the mouth and I guess most of us must think "meat is a protein made of animal flesh, I'm sure it wouldn't melt at mouth temperature".  This lamb was melt in the mouth, science be damned.  Sides were also bang on, rich and creamy potato, the right volume of flavoursome jus, a smattering of greens, an addictive roast garlic clove which had to be carefully rationed.  Here comes Mr Sommelier again with another brilliant pairing, not just to the lamb but to the dish as a whole including the earthy mushrooms, we were officially super impressed. 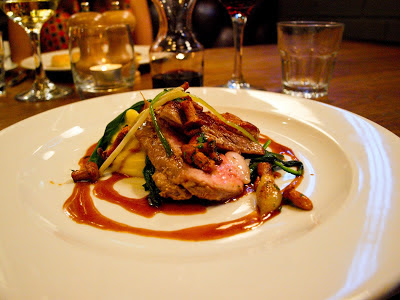 The whole lemon sole was Jules' choice.  By all accounts this simple fish dish was just as impressive as the lamb and the skill of Mr Sommelier.  Perfectly cooked and light as a feather, supremely crispy on the outside and scattered with meaty prawns.  Jules proclaimed that this was one of the best fish dishes she had ever eaten, I don't think she was exaggerating, I could see it in her eyes. 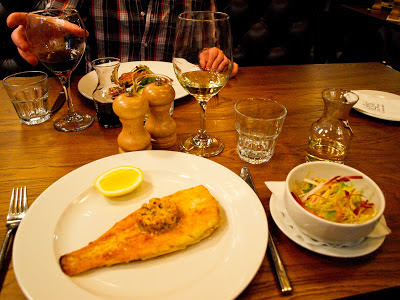 I could also see it in the skeleton of the fish which looked like it had been steam cleaned using some industrial catering equipment.  Predictably Mr Sommelier delivered once again with a white wine which didn't do much on its own but once combined with the sole flavours really came alive. 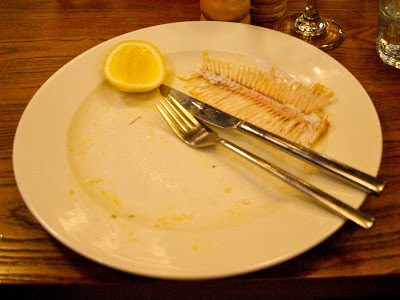 Pudding, exactly like the other courses, was unashamedly British.  I got the treacle tart which is one of my favourite dependable desserts.  The treacle itself was beautiful, not sticky at all but it had that huge, warm sugary hit.  The camomile, lemon and vanilla cream did its job as the counter to the tart, very pleasant indeed.  The only minor quibble came when I got to the pastry which was a little bit hard, looked quite dark and almost had a wholemeal taste to it which dissipated the sweetness of the treacle.  It wasn't bad by any stretch of the imagination, I quite happily wolfed it down.  It really helped that it was accompanied by my first dessert wine that I've really ever properly enjoyed, it had a real caramel hit of its own!  Mr Sommelier was going in to the final dish with a 5-0 record. 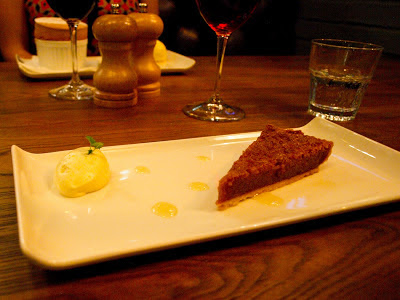 Now Jules had stated that she was going to go for the marmalade sponge and she was pretty sure of this decision.  The waiter had other ideas, before we had given our choice he told us that his favourite dessert was the raspberry soufflé, Jules offered that she had considered that dish, "Then you can have that" said the waiter and dramatically disappeared.  Woof, when somebody tells you what you are going to eat for your dessert it better be good.  Before we had a chance to try it though the waiter returned to tell us that the first one had collapsed and so the chef was not happy sending it out but it would only be a few minutes for a replacement, very classy service.  It arrived and the waiter's advice didn't stop there, he instructed Jules to knock a hole in the top of the soufflé and then pour the sauce on top.  The waiter's advice was unarguably brilliant.  Even just looking at it you could tell it was a great soufflé, it appeared that it was desperately trying to escape the dish taking an entirely vertical escape route.  It had a tiny little bit of crunch to the exterior then super fluffy on the inside, the interior was fairly sweet but well balanced with the super sharpness of the sauce which if it all got too much for you could itself be balanced with the unexpected ice cream on the side.  Mr Sommelier made it 6-0. 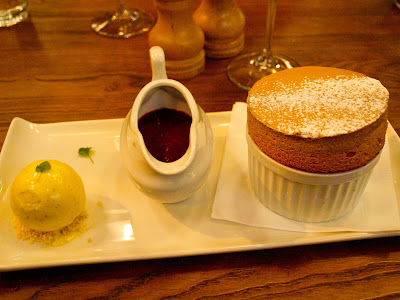 So two great starters, two perfect mains, one amazing dessert and one good dessert.  Not a bad show!  We were blown away by the whole experience from beginning to end.  The wine matching was phenomenal, I cannot recommend more that you ask for recommendations to accompany your meal, it really pushed the already excellent food to the next level.  Not only that but the explanations of the matchings and the the background of the wines was delivered with enthusiasm and confidence but, most importantly, it was actually interesting information!  We instantly decided that Alberts would be a place that we would love to bring visitors to to really show off what British food can be, what great produce we have, what great service we can deliver and what lovely architecture and style we have.  All without pinching from any other nations. 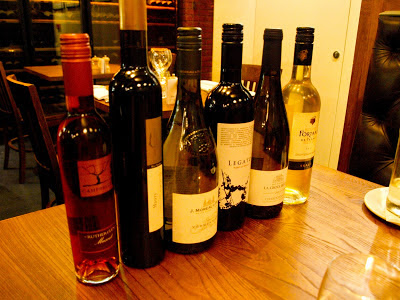 Today we are going back for Pay Day steak day.  Can't bloody wait.

Posted by Bailey at 8:43 AM
Email ThisBlogThis!Share to TwitterShare to FacebookShare to Pinterest