The other weekend my fabulous friend, the illustrious Miss Hannah May was to be visiting Manchester. She and her friend Cheryl had booked a fancy pants appartment out for the weekend, and invited us to join them for a Friday night dinner at Jamie's Italian. Now, I'm afraid to say Jamie's Italian had been struck from our 'to do' list a few months earlier when I'd been told that it just wasn't quite up to the standard of some of the other Italian restaurants in Manchester (of which there are approximately one zillion). 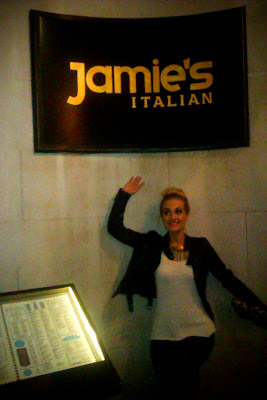 However, I love Jamie Oliver, I love Italian food, I love amazing buildings (which everyone had said Jamie's Italian on King Street is) and I love meals with awesome people like Hannah May so there was no way a few negative reviews were about to get in the way of a rip-roaring evening. 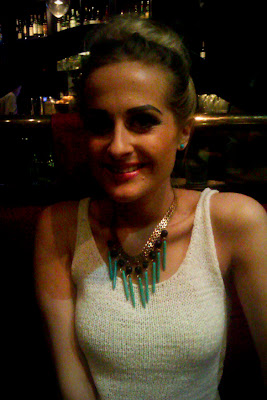 I was really excited to see my lovely friends and when Bailey and I arrived they were already having a fantastic time. Apparently the lady on the bar was an absolute joker and had given the girls a straw each for their wine. I decided to go for one of the bargain £5 cockatils - a Cosmopolitan. This was OK, didn't particularly blow my skirt up but I would be interested to know if there is anywhere else around King Street you can get any cocktail at that price, I doubt it.

Once sat down we could really start to appreciate the building. I really do mean it when I say that the building Jamie's Italian is in is absolutely jaw-droppingly stunning, with a fantastic atmosphere to boot. Housed in an old bank and steeped in history (apparently while rennovating the place they found, among other things, some Joy Division master tapes), the place is beautiful. 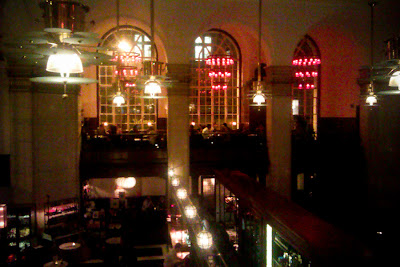 Jamie's is also absolutely massive. The walk up to our table on a first floor balcony took a good few minutes of climbing up several flights of stairs and the lengthy trip down to the 'vault' area where the bathrooms are is well worth it - surely the loveliest loos in Manchester and I felt more like I was in Gringott's Bank. 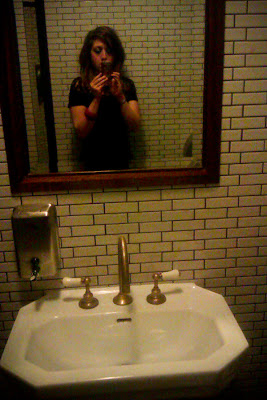 Now I can't say I had particularly high expectations for the food, I thought it would be 'alright', which it was really. I started off with a portion of Seasonal Veg Crudités on Ice. What I really wanted was a PLANK packed full of Italian cheeses and veggies like the one the neighbouring table were chowing down on. However I was trying to be healthy. Well Jamie didn't want to make it too much fun for me to be healthy as this was mega healthy. I'm not too sure if serving crudités on ice is a 'thing' but it it made the veg really cold which worked really well with the peppers and fennel but made the carrots and beetroot quite difficult to eat. The lemon yogurt was nice as were the lovely crunchy thin bits of toast. 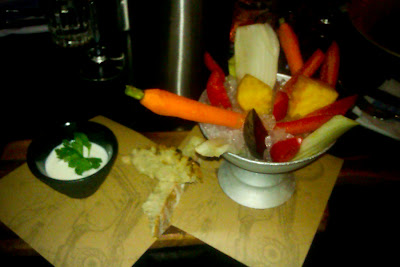 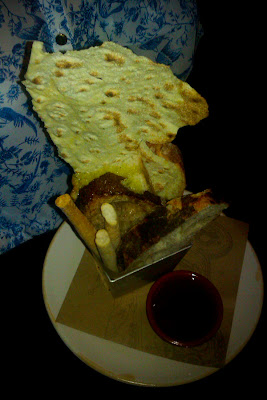 Bailey's starter was a special of Pork Ravioli. Despite its unappealing appearance, the sauce was rich with red wine and flavoursome but the homemade pasta was unfortunately undercooked. 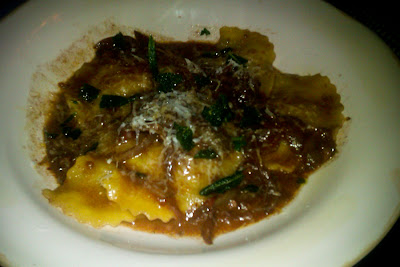 For mains I faced a tough decision but this time I decided to go for what I really wanted rather than what I thought I should order - the Pumpkin and Squash Gnudi. When it arrived it was basically a bowl containing the Gnudi on the outside the squash and some pear in the middle in a sauce and sprinkled with the blue cheese and walnuts. Again, it was OK but the gnudi were a bit bready and flavourless apart from the odd mouthful you'd get where some of the blue cheese had been mixed into the gnudi dough. The squash I thought would have been better chopped up and the pear could have done with less cooking as it was super soft. I did like the walnuts and rosemary on top. This is a dish I would really like to attempt to cook in my home as it was a great idea but just maybe not executed quite right. 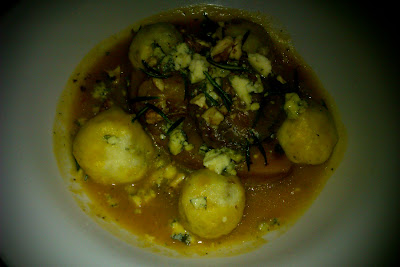 Hannah had chosen well and was mega happy with her Jamie's Italian Burger which looked fantastic. The burger was packed with tasty, fresh toppings including some delicious-sounding smoked mozzarella. The Funky Chips (a few of which I was lucky enough to steal) were awesome - proper rustic skin-on chips with huge bits of garlic all over the place. Mmm. Her only complaint about the dish was that the "cotton-wool"-like bread fell to pieces and went all over the place - a shame considering the quality of the bread earlier in the meal. Cheryl was also pleased with her order of Lamb Stew - cooked overnight and a good hearty portion of food. 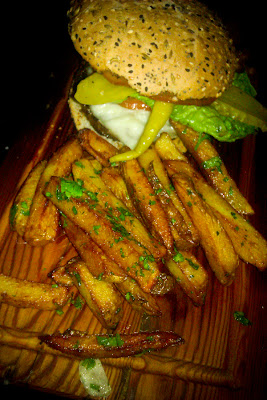 For his main course, Bailey chose an item from the specials menu - Carbonara. A decent sauce but pasta undercooked again and he could only find a few scraps of bacon. Not as good as the Carbonara he ate at the last meal we went to with Hannah May at BB's! 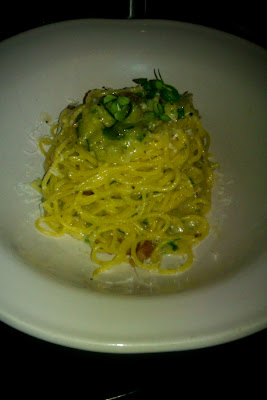 We all decided against dessert as we were all quite full and keen to hit the Northern Quarter for a drink or two, however I did squeeze in an Amaretto Coffee. This was lovely - honestly my favourite part of the meal! They know how to knock up a decent coffee in that Jamie's. 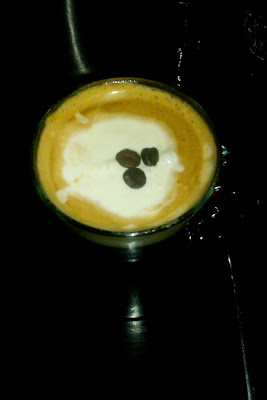 We had a fantastic time at Jamie's Italian and all agreed that although the food wasn't of the standard that it would be had Jamie Oliver had cooked it himself (or even of the standard that it would be had you opened his Jamie's Italy book and cooked his recipes to the letter), the main attraction of the place wasn't really the food, it was having a brilliant night out in the amazing building which really did make the evening for us. It's the sort of place my mum would just LOVE to eat in, I will take her in sometime. We were also pleasantly surprised by the bill which was less expensive than we were expecting. 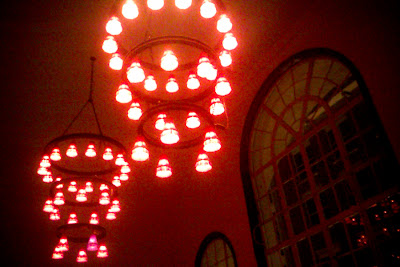 We also thought the service was spot on from start to finish - every member of staff who dealt with us was professional, friendly and chatty. We were in the restaurant for over two hours and never felt rushed or even that they needed our table for another group (I don't think they did - I think the restaurant is so big they have enough tables for everyone). 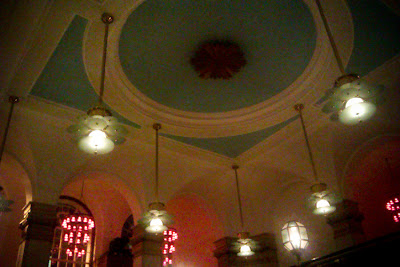 So would we go back to Jamie's? I think the answer would be yes, but for a drink and a PLANK (it's a great place to start a night out) but probably not for a full meal again as there are other Italians on our list we need to try first. However I have to say the building and the atmosphere of the place is not to be missed! 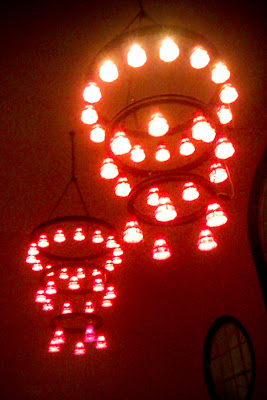 Posted by Jules at 4:21 PM
Email ThisBlogThis!Share to TwitterShare to FacebookShare to Pinterest