Our foodie 'to do' list for Manchester is huge. No matter what we seem to do it is always growing rather than shrinking as we seem to add places onto it more often that we cross them off. This does at least mean that we are able to be very selective about what goes on said list, and hearing anything but 100% glowing reviews is enough to get a place struck off for good. 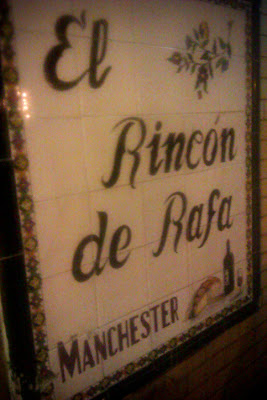 El Rincón de Rafa has been coming off and going back on the list for years - we've heard such mixed reviews, one minute you'll hear someone saying it's the most amazing Spanish food they've ever tasted then the next minute you hear tales of terrible microwaved tapas and hour-long waits for mediocre food. When my friend Nat recently told me she had been and had a "sensational" meal, I started to consider adding it back onto the list - it is a Manchester "classic" after all. Well, fortunately we didn't need to wait long as Nat liked it so much she decided to invite us all to go with her for her birthday meal! 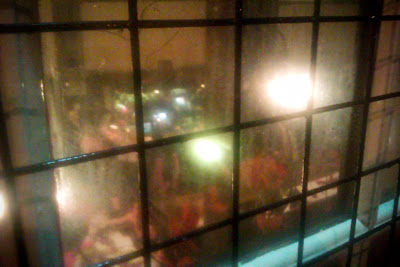 I was very impressed that as soon as we arrived at El Rincón I felt like we were in Spain - it is an awesome space with high ceilings and a rustic feel to it which really reminded me of L'Ovella Negra where we used to drink before Razzmatazz in Barcelona (the Marina branch, not the one in El Raval that's full of tourists). There was a fantastic friendly Saturday night atmosphere and we were even treated to some card tricks by this brilliant budding magician child from the neighbouring table. Another similarity to L'Ovella Negra was the jugs of Sangría that were flying about the place. This was sweet and very drinkable (and drink it we did - a lot!) but I felt it lacked the winey depth I'd expect from a Sanny G at a bar (or even out of a carton of lovely Don Simón) in Spain and tasted more like a Tinto de Verano.

Our tactic as a table of seven was to choose two tapas each off the menu each and get stuck in. This turned out to be a fantastic idea as I got to try absolutely loads of different dishes, including several I wouldn't have thought to order myself. I was also expecting a long wait on the food as it was busy but it seemed the kitchen were just sending stuff out to us as and when it was ready which was great, every new arrival at the table was met with excitement and a collective "ooh!" 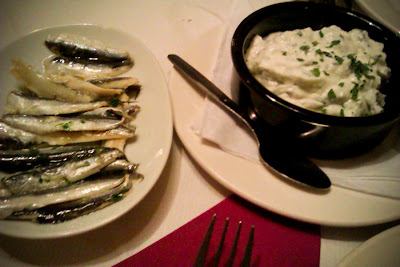 First up were some baskets of bread, a wee plate of Boquerones en Vinagre and some Allioli. Being a classy bird, I obviously immediately made a boquerón and allioli sandwich which was AWESOME. The Allioli was off the hook - so garlicky I really feel for anyone sat near us in the pub later. I recommend you get this with your tapas if you visit El Rincón because it will make anything amazing. 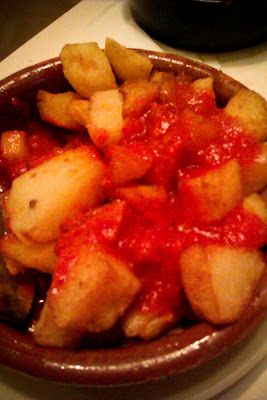 After living in Catalonia I can tell you that no two restaurants' plates of Patatas Bravas are the same. The shape and crispiness of the potatoes, the sauce (sometimes even resembling more of a ketchup), whether or not there's a dollop of allioli on top etc, varies from place to place. I liked the sauce on El Rincón's version and thought they tasted ace but I would have liked the potatoes to have had a moment or two longer in the fryer as I think being drenched in sauce can make a plate of bravas go a bit soggy. 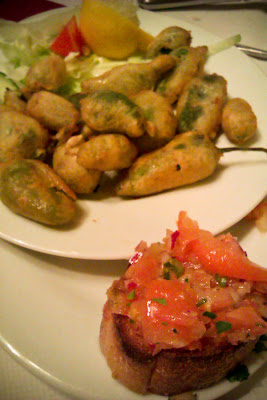 I was excited to see Pimientos de Padrón on the specials menu but surprised when they arrived deep fried in batter; I'd not seen them done like this before and it didn't explain this on the menu. The batter was light and crispy but I don't think I'd have ordered them had I known, I love these little peppers so much and get my hands on them so rarely that it seems like sacrilege to put anything other than oil and salt anywhere near them!

Pan Catala (another dish that looks different wherever you go) was nice and crunchy and piled high with flavoursome tomatoes. 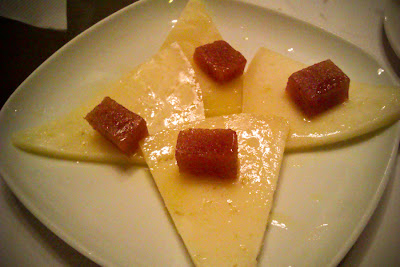 Queso Manchego was obviously of a good quality as it didn't have that plasticky texture you can sometimes get with it and I thought the membrillo to Manchego ratio was good.

The Gambas Pil Pil were beautiful and even as a hater of all things prawn, Bailey couldn't stop dipping his bread in the spicy, smoky oil they had arrived in.

Pulpitos en Salsa was lovely too - nicely cooked octopus with a rich tomatoey sauce you also wanted to dip your bread into. 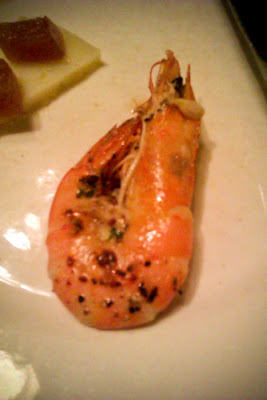 One of the last things to arrive at the table was one of the dishes I'd most been looking forward to - a huge plate of Razor Clams. I'd never eaten a razor clam before and haven't prepared them at home (I'm pretty sure Bailey wouldn't touch them with a barge pole) so was quite intrigued. They were delicious but unfortunately the razor clam I got was accompanied by a large mouthful of sand. Apparently I was the only one around the table who got this so I think I was unlucky. I'm looking forward to trying a less sandy version in future! 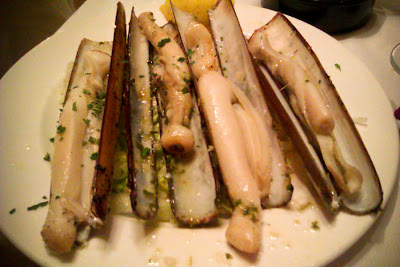 There were also quite a few meaty treats floating around the table which obviously I didn't try but were also apparently really good. The Albondigas, according to Bailey were fantastic, and although the Pork Cheeks split the group with some finding them too chewy, Bailey was also fan of these.

So our food at El Rincón was most enjoyable so what about the service? Well we had two different members of staff dealing with us and both were excellent. I was too shy to speak to them in Spanish but the fact that they were Spanish added to the holiday feeling. The food and drink was all brought out speedily but not so much so that we had too much food going cold on the table at any time. They were also great at knowing which plates to take away and which little pots of leftover sauce  to leave in case we wanted to dip (dipping is one of the best parts of eating tapas for me, they should really only give you the bread at the end!) Even though we were taking up a big space in the restaurant and the place was busy, they never made us feel rushed and we did stick around for quite a bit of time to finish our drinks after finishing eating.

The most pleasant surprise of the meal was getting the bill at the end and seeing what a bargain the whole thing had been. Despite having drunk crazy numbers of jugs of sangria and beer, the bill for seven people was notably cheaper than our recent surprisingly expensive bill for four at Yang Sing, and the evening was just as enjoyable. I couldn't believe that after ordering basket after basket of bread the total charge for this was a mere £1.60!

I would definitely return to El Rincón but I think I would make sure I went as part of a large group, I don't think I'd have liked it as much had it just been me and Bailey. Our expectations were definitely exceeded and as an indication of how much I obviously got stuck into this meal, I will tell you that I later found an alarmingly large blob of tapas on my right bicep... How that got there I have no idea but I was obviously having too much fun to notice!

Posted by Jules at 10:32 AM
Email ThisBlogThis!Share to TwitterShare to FacebookShare to Pinterest