There are few things I like better during my half term holidays than an excuse to go into Manchester centre for a mooch around and a bit of me time. I was very pleased therefore when the opportunity arose for just that - an invite from a "tiny coffee shop" called Caffeine and Co. to pop in for a coffee and a chat and while I was there to do a little review. Lovely! 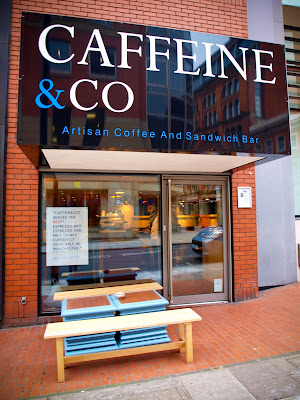 Now before my arrival it had been stressed to me that this coffee shop was indeed very tiny. I don't mind tiny places too much but what I don't like is turning up for things late. However this could not be avoided as the tininess of the place meant that, despite being stood right next to it on several of my frantic walks up and down John Dalton Street, I couldn't for the life of me find the place. Eventually I had to phone up for directions - turns out it has a massive protruding sign (which was so protruding I couldn't see what it said!) and you just need to keep your beady eye out for it (it's in St James's Square, if you can call it a square). 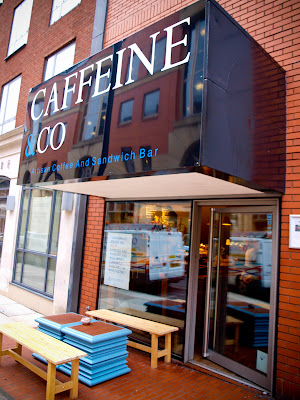 It was lucky then that Caffeine and Co. has a tranquil, relaxing environment, helped along by the softly-spoken manageress Claire - sitting down in there was like having a moment of calm. 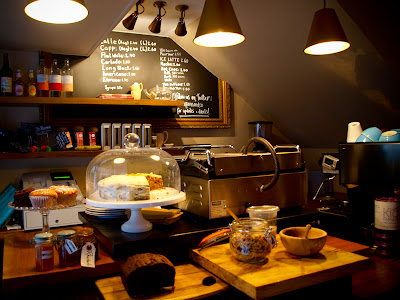 Claire explained that all their coffees are supplied by Square Mile, selected because of their freshly roasted beans. Apparently Square Mile is all the rage in that London, but here in Manchester, Caffeine and Co. is the only place you can get your hands on the stuff. Reading the information on the packet of Red Brick that Claire gave me to have a look at, I could see that these guys take their coffee seriously (I felt like I was reading the back of a bottle of fancy wine rather than a packet of espresso), the beans they use varies depending on what's in season. I was also impressed to hear that all of Caffeine and Co.'s cakes and treats are home baked and that they really enjoy trying out new recipes and flavour combinations. 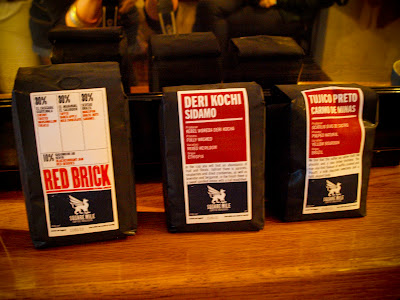 So without further ado, it was time to taste some of this fine coffee and cake! Going on Claire's recommendations I went for a Flat White and a Beetroot and Chocolate Brownie. The coffee looked stunning, served in lovely bright blue cups and saucers and with a pretty pattern on the top of the milk foam - I'm always impressed with places that can do that! It tasted just as good as it looked so it seems Square Mile's hard work is paying off. The brownie - although a petite little square, was a squidgy delightful chocolatey sweet treat. I've been lucky to eat a few excellent brownies lately I have to admit, and although they were all so different I simply couldn't choose a favourite, this is definitely the one for people who like a nice bit of goo to their brownie. This was also definitely the best beetroot-based chocolate baked item I've ever tasted. 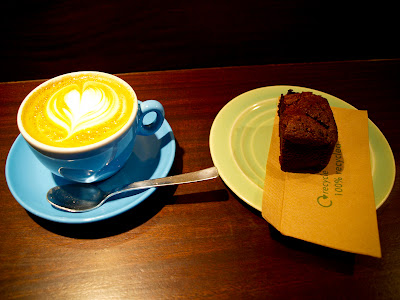 Having succumbed to the paired wines with dinner deal at Aumbry the night before, I have to admit that on arrival at Caffeine and Co. I wasn't quite feeling 100%. Well after a great cup of intense coffee and a great square of intense brownie I felt much happier about going out and facing the world, in fact my mooch around town was completed with a spring in my step. Thanks to Claire and Pippa from Caffeine and Co. for the invite, I will definitely be back and I would say to everyone else, go and hunt the wee place out as it's well worth a visit! 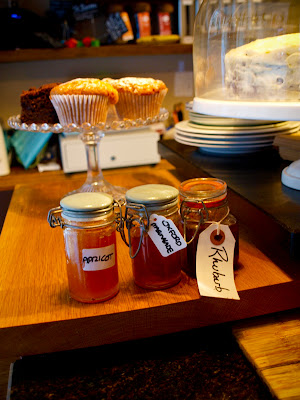 Posted by Jules at 8:34 AM
Email ThisBlogThis!Share to TwitterShare to FacebookShare to Pinterest