A couple of years ago we went to celebrate a friend's birthday at Akbar's in Castlefield at which I put myself through the terrible trial of death by naan bread.  I attempted their food challenge and failed spectacularly with a monumental amount of stomach discomfort and no free dessert.  One of the issues I had was that prior to taking on the challenge I successfully drank a couple of pints of lager in the nearby The Oxnoble.  I remember at the time that we all agreed that it was great pub and after perusing the menu it looked like they had some quality grub on offer as well, a pledge was made to return in the near future but for whatever reason we never got round to it. 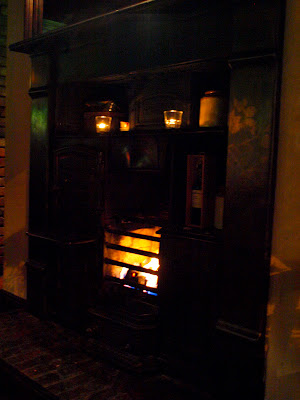 We got an opportunity to visit recently as The Oxnoble got in touch to invite us along to sample their menu.  Remembering our fond memories of the place and noting a few other bloggers having kind words to say about the food we nearly bit their hands off at the chance to go for a meal in their delightful pub.  Normally when a string of bloggers are invited to a restaurant for samples it usually means that the owners have got something to shout about like a new menu, now The Oxnoble have that but I think they are going for a much simpler message and that is that The Oxnoble is not 'just' a pub.  I think pub food has got a bit of a bad rep as most pubs use food as a profitable sideline and perhaps don't put as much effort in to their food as they do their fine ales. 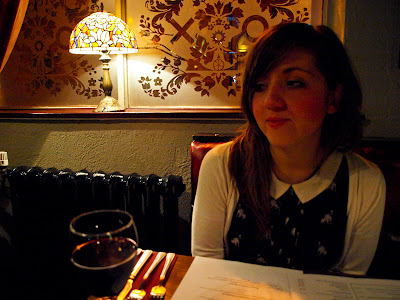 Before we get to the food I have to reconfirm that The Oxnoble is a great pub.  It's got a lovely atmosphere to it, a good selection of ales as part of a well stocked bar and the building is beautiful.  We were more than delighted to be sat next to a roaring fire on a night featuring Manchester's world renowned crappy weather. So a great pub that wants to be a little bit more.  After a chat with the manager (we were confidently told that the food would 'speak for itself') we set about choosing our items from the menu.  The menu is definitely a couple of notches up from a pub menu and although the old pub favourites are on there (fish n chips, pie n mash etc.) they are accompanied by some significantly fancier items such as braised ox cheek, chicken liver parfait and scallops.  You aren't going to get those down your local.  One other thing to mention about the menu is that they have a great deal on which gets you 2 courses for a tenner from a slightly smaller subsection of the menu.  I can tell you now that with the quality of the food this is a rock solid bargain. 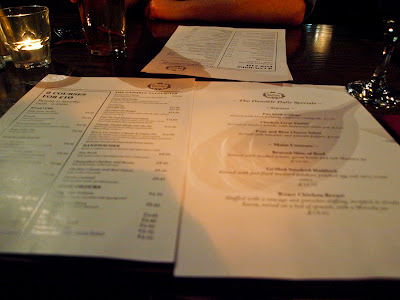 OK so for my starter I went for the breaded goats cheese served with pimento peppers and balsamic reduction.  I love goats cheese so I ordered this but in the back of my mind I was a little worried that it might be goats cheese overkill ending up in a claggy mouth.  I was dead wrong as the peppers and reduction really cut through the goats cheese despite it being a very generous portion.  I think I could have easily eaten this again immediately and I immediately saved it in my memory banks to attempt at home for friends.  Very good.  Better than pub food. 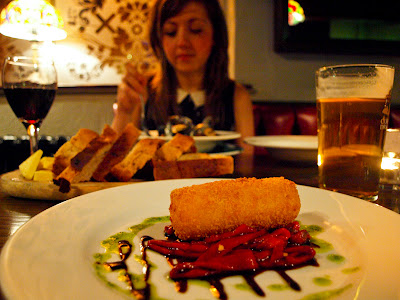 Jules went for the Mussels steamed in white wine and garlic served with fresh bread.  A lot of fresh bread.  You get about a third of a loaf.  They are also not shy with the mussels.  This might be the most substantial starter I've ever seen and could easily have passed as a main in most establishments.  Luckily they had not sacrificed quality for quantity as the mussels were absolutely spot on.  They were well cooked plump beasts swimming around in an intense but not overpowering creamy sauce.  The bread was a little bit past its prime but honestly that didn't matter when combined with the leftover sauce.  I'm not a big fan of mussels but I could easily have drunk a pint of it.  These mussels were well beyond the capabilities of a pub chef, Jules described them as a 'decadent treat'.  Brilliant and please do keep in mind that both of these dishes are available as part of the 2 for a tenner deal! 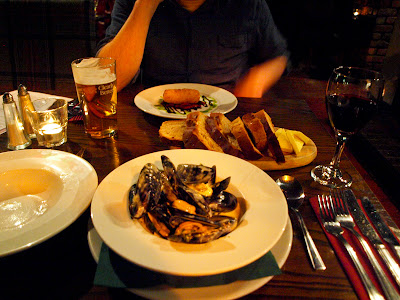 For main I went for the Timothy Taylor steak and ale pie (accompanied by savoy cabbage, mashed potato, black pudding and of course gravy).  This really is my go to dish if I see it on a menu, I love the rich ale taste meshing with the steak, I love the crisp pastry and I love good salty buttery mash.  Sadly I didn't get any of those things that I love so much from this dish.  The mash was almost flavourless and there were lumps of uncooked potato throughout.  I'm not sure the pie had ever come in to contact with ale, it certainly did not survive the cooking process if it had as it was entirely absent from the pie filling which was a pretty standard steak and gravy albeit a little on the dry side.  The gravy, savoy cabbage and black pudding were all pretty good although I was a little befuddled by the presentation of the little cabbage/pudding 'burger' arrangement.  The biggest failure was the pastry which was dry and chewy, I'm a gluttonous gannet and in the end I pushed it to one side.  Now this isn't a dish that I would have sent back and it wasn't terrible but had I paid the menu price of £12.95 I would have been severely miffed.  For that price you do expect pie and mash to be something a little special and this wasn't, sadly this was standard pub grub with a non standard price tag.  Now I have to point out that when I spoke to the manager to give a bit of feedback on this dish he was genuinely shocked to hear this, the pies apparently fly out of the kitchen and they always get good feedback and taking in to account the quality of the rest of the meal I think we can safely say that this was probably an unfortunate hiccup. 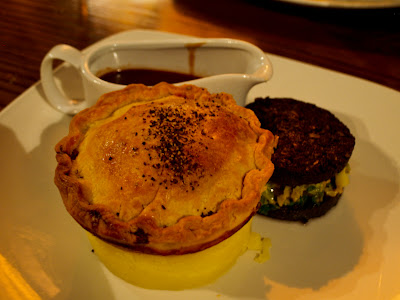 For the main course Jules chose grilled smoked haddock with pan fried mustard potatoes, poached egg and curry cream sauce.  This seemed like an all round winner, the fish was nicely cooked, all the flavours worked together and the curry cream sauce complimented the subtle smokiness of the haddock.  Always a plus point when the poached egg arrives perfectly cooked too!  This looked like a slightly beefed up restaurant dish, really well executed but just a little bit more robust. 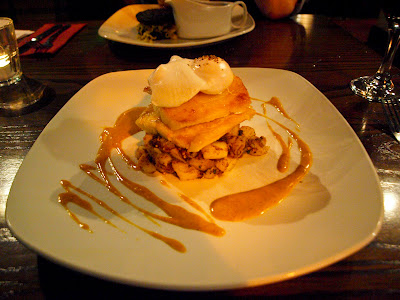 As the apocalyptic rain continued outside we made the tough decision to carry on eating by an open fire.  For dessert I went for the treacle sponge, a pretty run of the mill pudding that can't go wrong but also never really shines.  This was probably the best treacle sponge I've ever eaten, a far cry from the usual plain sponge with a bucket of treacle on top.  It was actually a really complex flavour when everything was combined, loads of spices going off that gave it a bit of an unexpected kick.  In line with the other dishes The Oxnoble had not been tight with any of the elements, I definitely did not fall in to the unwelcome situation of running out of sauce as there was bags of it.  It was absolutely lovely and a perfect winter pudding.

Jules had opted to go for traditional bread and butter pudding served with custard.  Jules loved it and found the pudding so rich that she was convinced it was made with croissants but no the staff informed us it was just the normal bread they purchase fresh from the same butcher who supplied the granary bread served with the mussels.  Really impressive. 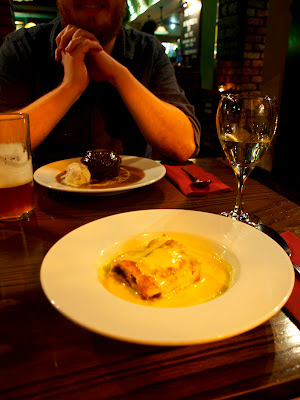 Throughout the meal service was excellent with the waitress appearing at just the right time and on top of that everyone we spoke to seemed genuinely friendly and eager to make sure we (and others around us) had a nice evening.  Is The Oxnoble a pub?  Yes it is but it's a pub serving up a menu that goes above and beyond the call of duty, a pub that on the whole is executing those dishes to a really high standard whilst also serving generous (perhaps too generous!) portions.  They are already delivering great food in a really warm environment so I really hope they do manage to get the word out that they aren't 'just' a boozer.  We've been to a good run of British pub/restaurants in the past two weeks and I'd have to say that the Oxnoble was probably the best.  Everybody should get themselves down for a pint and a bite to eat and with the 2 for a tenner deal there isn't any excuse for not giving The Oxnoble a shot.

Posted by Bailey at 9:30 PM
Email ThisBlogThis!Share to TwitterShare to FacebookShare to Pinterest