At Christmas, we were absolutely thrilled to receive a very generous and thoughtful gift from our amazing friends Hannah and Gray - vouchers for a meal at Green's. Everyone, including Hannah and Gray, is always really shocked to hear that despite loving going out for meals and loving vegetarian food, we have never made it to West Didsbury's old veggie favourite Green's before. 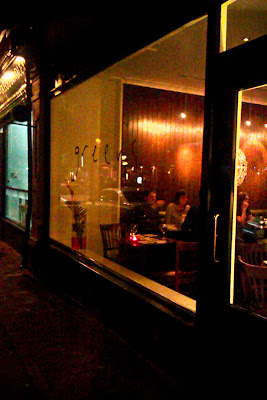 We finally got round to opening the vouchers in bed on Christmas day night after a busy day at a time when we were already not looking forward to the post-Christmas blues. The temptation was of course to get ourselves booked in asap and treat ourselves to a slap-up meal to cheer ourselves up. However, Bailey sensibly insisted we save the vouchers for a special occasion when we would appreciate them more.

Even though I grumbled at the time, this turned out to be a great call from Bailey as Green's was the perfect spot to celebrate our 6 year anniversary the Sunday night before last and also the perfect antidote to the gut-wrenching nerves I was experiencing prior to a mock Ofsted we were having at school. 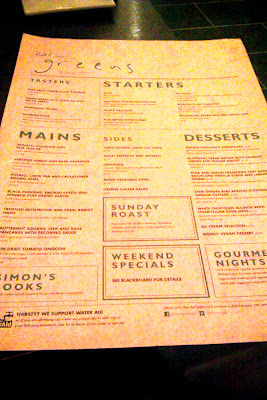 We arrived early doors - 6pm - to find the restaurant absolutely dead. Well, you wouldn't believe how quickly the place filled up - by 7pm Green's was packed to the rafters with a really nice buzz in the air and we were pleased we'd arrived to early to bag ourselves a great table. 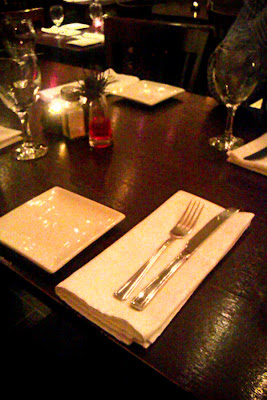 Due to my 'dietary requirements' I'm used to only having a limited number of options when eating out and I quite like this; I rarely face the sorts of agonising decisions that Bailey does when he can't decide between dishes on a menu. So you'd think I'd really struggle somewhere like Green's where I can eat anything I want. However, so many people have told me about Green's in the past that I felt like I already knew what was good to order from the menu, so between Bailey and I we ordered those dishes that had been recommended to us so many times - a portion of the famous Deep Fried Oyster Mushroom Pancakes and a Sharing Plate, the latter mainly selected due to the presence of the equally famous Deep Fried Veggie Black Pudding. 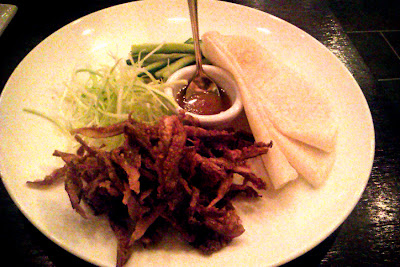 The pancakes were just as good as everyone said - crispy mushrooms, freshness from the cucumber and spring onion and sweetness from the sauce. This was quite a big starter, but I'd still have liked an extra pancake so Bailey and I could both have had two each and so there wasn't a load of fillings left over. 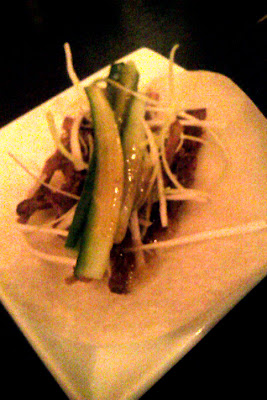 The Sharing Plate was also gorgeous - the veggie black pud and mustard mayo was spot on (Bailey said "nicer than real black pudding") as were the little cheese chippolatas which were crispy-skinned, herby and somehow managed to be meaty. The olives were also very nice. 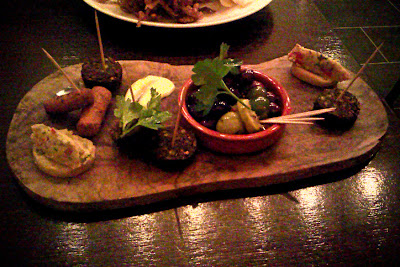 The Chickpea Guacamole Bruschettas were quite a little treat too, nice crunchy and fairly oily toasts, although I found the chickpea guacamole topping to be a little dry - not as creamy as I'd expected. 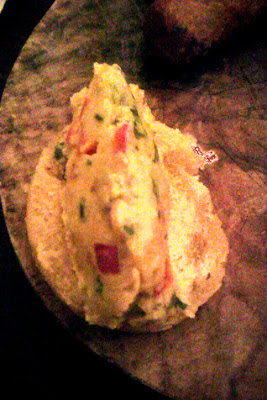 So a great selection of thoroughly enjoyable starters had kicked off our meal. Now I am one of these people who loves a good starter. If made to choose, I'll always go for a starter over a pud as I love starter type food - smaller portions of rich, savoury deliciousness. The dishes at Green's that I've heard people rave about are all starters so I didn't know what to expect for mains, and I do feel that perhaps Green's hadn't spent as much time and effort developing their selection of main courses. While the starters were all fairly inventive, I found the mains selection a little less interesting and struggled to decide what to have. Now I've noticed that in the week that has passed since our visit, the main courses on the menu have changed and I'd be interested to see if this was to address the lack of exciting main courses. Worth a return visit to find out! 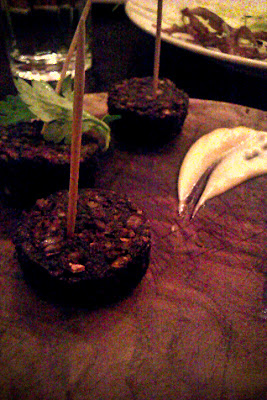 I eventually settled on the Butternut Squash, Leek and Sage Pancakes with a Pecorino Sauce. I loved the presentation of the dish - I do enjoy things that are served on boards - however this could have been a little bigger as my salad kept flying off the edge onto the table which displeased me as it was a really great salad with a lovely dressing and delicious crunchy bits in. The main dish itself was nice - I liked the way the pecorino sauce had an almost soufflé-like texture but I found the pancakes quite thick and the butternut squash filling a little bland. For me, the dish was a bit underseasoned and I'd have liked a bit more of a cheesy flavour to the sauce and a pancake filling that really shone. 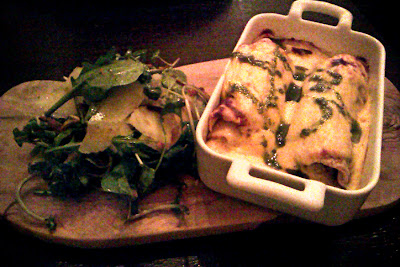 Bailey went for the Cheshire Cheese and Basil Sausages which tasted brilliant - creamy, super smooth, super light potatoes, cheesy sausages in a generous helping of a really rich gravy. How they'd managed to make such an ace vegetarian gravy I would be very interested to know. However while the dish delivered on flavour, by ordering sausage n mash, Bailey had been hoping to get the most manly and robust main on the menu yet he found the dish to be quite insubstantial. I'm not saying Bailey left hungry but I do think, especially if they were only having a main, most people would want a more substantial dish for their £12.95. 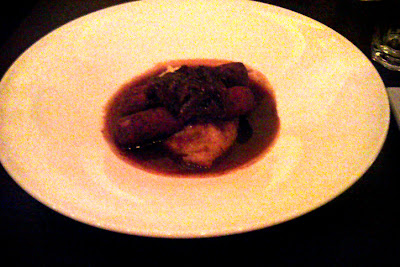 As it was a special occasion we thought we couldn't leave without treating ourselves to dessert! There was only one option for me - the White Chocolate Blondie with Honeycomb Eton Mess. This was like someone had designed a dessert just for me combining all of my favourite dessert elements and I couldn't wait for it to arrive. Even so, I was still surprised by how absolutely amaaaaazzzzzinggggg this dessert was!! I loved it. To start with it was pretty as a picture. Then I made sure I got a little bit of every element on my spoon before getting stuck in. Warm, sticky, sweet blondie, crunchy honeycomb with a lovely bit of melted chocolate and a gorgeously decadent Eton Mess. This was the best dessert I'd had in ages and I've had some amazing desserts recently. I implore anyone who goes to Green's to order this! 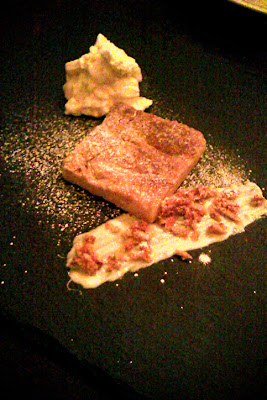 Bailey had the Double Chocolate Cheesecake which was a very good cheesecake and lived up to its name as it was a real chocolatey feast. Unfortunately for Bailey my dessert was one of the best desserts ever so as soon as he tasted it he was quite jealous. Seeing as it was our anniversary I probably should have given him a bit more but I challenge anyone to go into Green's and order that Blondie then share it - I believe it would be nigh on impossible. 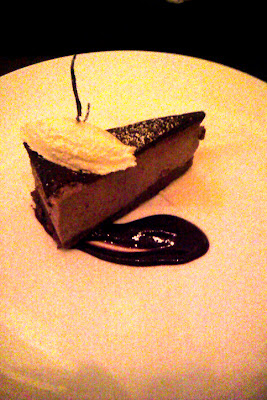 So a very enjoyable was had at Green's by myself and Bailey. I have to say it was a splendid location for our anniversary - it's a very relaxing place and I think perfect for a quiet Sunday evening meal. I really must say that the service throughout the meal was fantastic. Our waitress was really good, super friendly and genuinely happy to be serving us. The dude who was in charge of making the drink was lovely too - so keen to please, plus on a few occasions he brought us our drinks so fast that I was baffled as to how it had been humanly possible for our waitress to give him the drinks order and for him to make the drinks in such a short space of time. 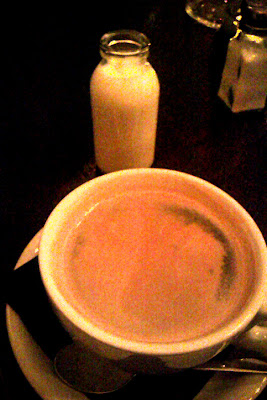 This place is surely a must for local vegetarians and vegans but I'd be interested to know what local meat eaters have to say about their experiences of Green's. On this occasion Bailey felt he did miss the meat in the main course, yet the restaurant was packed full of people and I'm sure not all of them can have been veggies. We were a little disappointed to discover that we'd narrowly missed out on trying the new menu at Green's so we will most certainly be back before too long to chow down on the old favourites as well as some new ones. 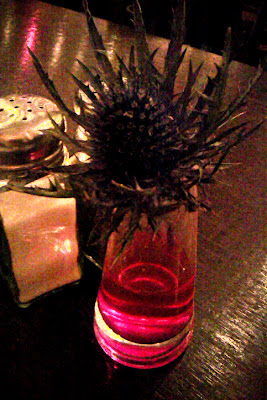 Posted by Jules at 3:47 PM
Email ThisBlogThis!Share to TwitterShare to FacebookShare to Pinterest