The folk behind Port Street Beer House are on a well deserved roll at the moment. Not only is this Bailey's favourite pub in town, their other boozer Common is not to be sniffed at. Throw in a few awesome collaborations with local street food traders such as Dirty Dogs and the perfectly executed, almost heavenly, Indy-Man-Beer-Con they organised so successfully this year and these guys are a force to be reckoned with. 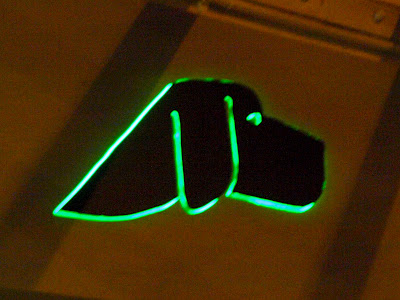 It therefore goes without saying that we would be eager to try anything they threw our way, which is why we were so excited about the news of a "beer house with a dining room" known as The Beagle opening in Chorlton, our favourite suburb of Manchester. They did a pretty good job of getting tongues wagging at the Beer-Con by handing out mysterious flyers advertising The Beagle with the beer tokens and we hadn't stopped thinking about it since. 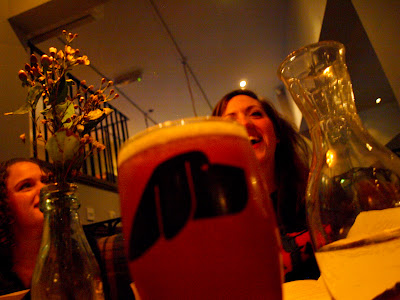 If there was anyone else that was going to be as excited about all this as we were, it was of course going to be our fabulous food and booze-loving friends Beth and Dave, so we penciled a date into the diary and invited our other lovely friend Jeni too. Unfortunately Dave couldn't join us for food but met us later for some Beagle beers.

So keen was I to book this meal that I tried to phone them before they had even opened to the public and ended up getting a table via email, so you can imagine how giddy Bailey and I were on the way there having had a few cheeky drinks, we didn't even mind that it was the coldest day of the year as we walked to the bus stop.

We needn't have worried about the cold as, despite being very spacious and airy, The Beagle manages to be really cosy; I loved being seated at our awesome table (we recommend requesting the table on the little balcony overlooking the bar) to find it had a lovely blanket draped over the back of the seat - very homely. 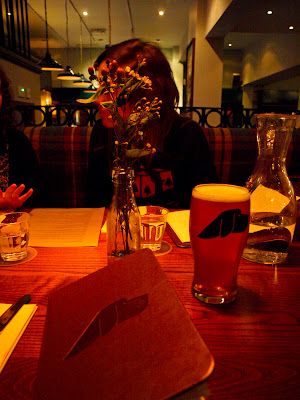 For Bailey and our friends it was beers all round - including the house pale ale (Bailey's review: "Cracking. A real easy drink which is quite light so is unlikely to clash with anything you're eating") and Beagle's Best (brewed by local beer wizards Quantum Brewing Company). I was very glad to have Beth with me to recommend a wine (supplied by Hanging Ditch) to go with the food I'd chosen although we ended up getting the house red as the wine Beth suggested was sold out! The Las Brujas Tempranillo went down an treat anyway and we all enjoyed it. 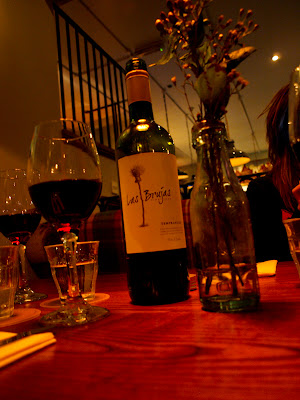 Before we knew it we were presented with a board piled with Beagle baked bread accompanied by salty butter and warm dripping. The bread and butter was amazing and I was getting pretty jealous of everyone banging on about how good the dripping was so decided to go for it. Absolutely amazing, it kind of made me think that I would never enjoy bread again unless dipped in this stuff. I did feel a bit guilty afterwards, I know I am the worst vegetarian ever but this was a new low. Worth it though. 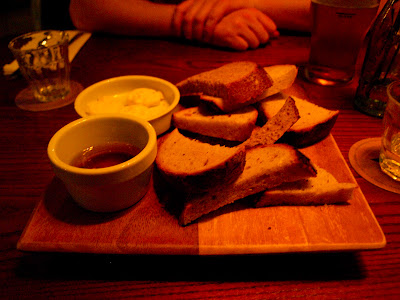 The plan was main courses only but after seeing the menu, eyes started darting across the table and the decision was made to go for the whole shebang. Bailey took my friend Nat's recommendation of the Salt Beef Stovey, and this turned out to be a superb recommendation. This can only be described as a perfect meaty treat topped with a perfect duck egg and a perfect grain mustard sauce. There were oohs and ahhs across the table as Beth and Jeni tried a bit and Bailey said that for carnivores, this alone would make a trip to The Beagle worthwhile. 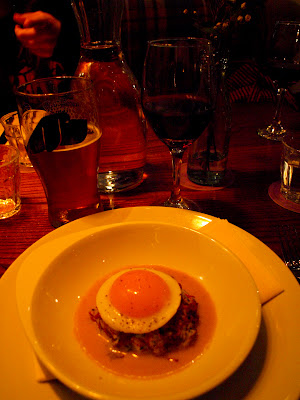 I chose the Pickled Mackerel which was a very pleasant dish with a nice slice of sourdough toast and pretty cubes of beetroot. I enjoyed this with my wine but I think I would have liked a bit more toast as I ran out quite quickly and although the fish was very fresh and lovely, I didn't enjoy eating it on its own as much as with the toast!

Beth and Jeni both went for some of the Oysters Mombassa of poached oysters with an African hot sauce. Both ladies really enjoyed these and Beth said that the oysters were so lovely and fresh they could have been served raw. 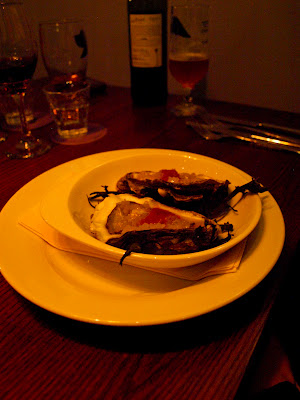 Onto the main event and Jeni couldn't wait to go for the 'Colonial Goose' which she had gone for because the first word in the description was "chump", which had tickled her. Turns out this dish doesn't actually contain any goose and as our waiter informed us, is so called as it refers to a New Zealand cooking method which uses a lamb to imitate goose. This was definitely the dish of the day, with Jeni describing this melt in the mouth lamb as the best meal she had eaten in years. Every mouthful shared around the table caused a squeal of excitement, and everyone was in agreement that this was a top notch plate of food. Lovely stuff.

My main was the Hay Smoked Wester Ross Salmon, although it was a toss up between that and the Pumpkin Pie, I'll definitely go for that one next time. The salmon was fabulous, I was a bit worried as it arrived looking a bit overcooked but as soon as I cut in I found a beautiful, perfectly pink bit of fish. Everything on the plate was excellent, and tied together beautifully by the buttery sauce. My only quibbles were, a bit like with my starter, I ran out of potatoes and ended up eating fish on its own. Another wee pot would have been super. I was also quite disappointed by the crispy salmon skin - I love salmon skin so was saving this until the end but it turned out to be flavourless and so crisp I could barely cut through it. All in all still a great dish. 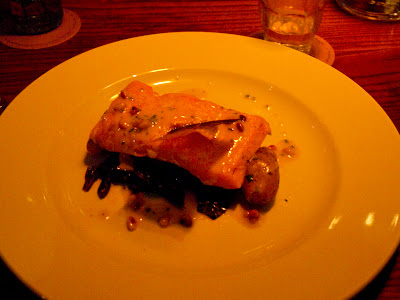 Bailey couldn't resist the Chargrilled 30 Day Aged Rump Cap Steak and this turned to be an excellent choice. First impressions weren't too good as he found the meat a little chewy, there was a thick ring of white fat around the edge, and the chips looked overdone. First impressions were dead wrong though - the steak was satisfying, the chips were the perfect accopmaniment giving it some crunch, the fat turned out to be the best bit as it was so tasty and the bone marrow sauce it sat in was delicious. Bailey was uber romantic in passing me one of his chips which to me, tasted like the most amazing chippy chip you hunt for at the bottom of the bag - well they were all like this and not overdone at all.

The controversial dish of the evening was Beth's BBQ Pork Ribs and Belly. The kitchen had run out of ribs and had replaced them with extra pork belly but she couldn't help feeling a little short changed as her dish was lacking an element. She did say that everything on the plate was very nice but didn't appear to be as well rounded as the other mains we'd ordered. 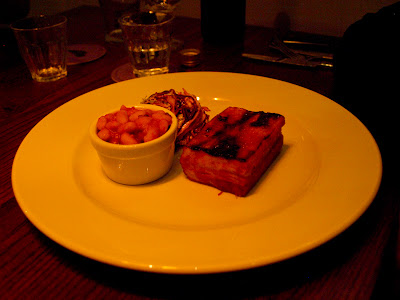 Again, we had planned not to have dessert, and if we did the compromise would be that Bailey and I would share one. Like the no starter plan, that also went out of the window. Bailey and Jeni both opted for the Treacle Tart with Earl Grey Ice Cream. Bailey is a fan of the old treacle tart so this was an obvious choice for him and it satisfied on every level - it had the gooiness he wanted as well as the crisp pastry. The ice cream added a touch of class but he said that whatever that was in the little ramekin - he could take it or leave it! 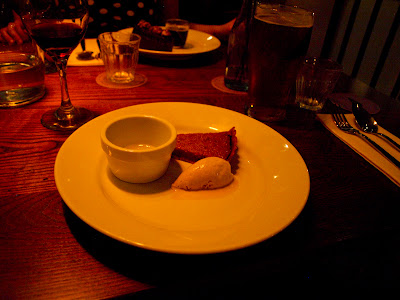 I had originally decided to order the Deep Dish Apple Pie and Custard but ended up panic ordering the Chocolate Beer Cake when we were told the apple pie had run out. This was one of the best things to happen to me all evening as I absolutely adored the Beer Cake. Rich, bitter and chocolatey, this is a dessert for anyone who's ever enjoyed a Guinness Cake (it is like that but loads better). The cake was served with a little shot of stout which not only made this a really fun dessert to eat, the stout complemented the cake perfectly in terms of flavour and moisture. I loved this dessert so much I woke up thinking about it the next day! 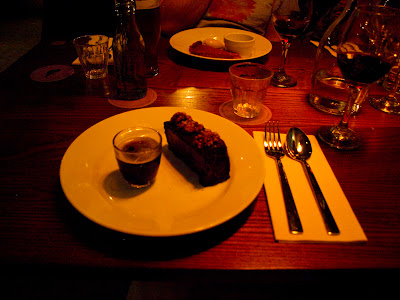 Overall we felt the food at The Beagle was quite a triumph and we will definitely be returning. I spent a lot of time on Sunday when I next saw Jeni talking about this meal and have recommended the place to a lot of people since and will continue to do so. At the time we said we thought the food might have been a few quid too expensive but writing about it now and looking back, what we were served was obviously of a really good quality and actually worth the money. The midweek menu is good value so we will make sure we head on over for that. 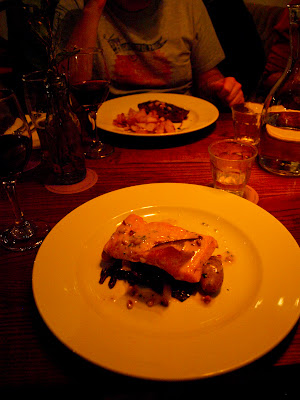 I have to say though that the food and drink wasn't even our favourite thing about the evening, what really stood out to us was the fantastic service we received from the moment we walked in to the moment the manager approached Bailey to ask for his feedback on the food. Our main waiter, Sam, was absolutely brilliant and put most other waiters in the world to shame with his informal and friendly but polite manner. He was so happy to answer all of our questions (of which there were many) and if he had to ask the chefs he didn't mind at all, saying he was interested to know the answers himself. He seemed to know exactly the right moment to come over to our table and seemed genuinely happy to be serving us. What a guy. The only low point service-wise was when Bailey went to the bar asking for the "most interesting beer on the menu" and was told by the very unsure member of staff that he should try the "house pale ale", but we put this down to teething problems and actually the fact that the staff of a new establishment had been so knowledgeable up to that point was quite impressive. 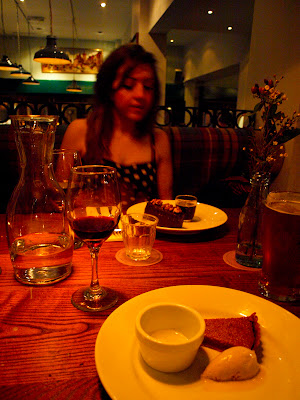 I apologise that this review of The Beagle has not been full of dog puns. I was too busy enjoying the memories of such a good meal to think of any. Get yourself to The Beagle. "Bone appétit". 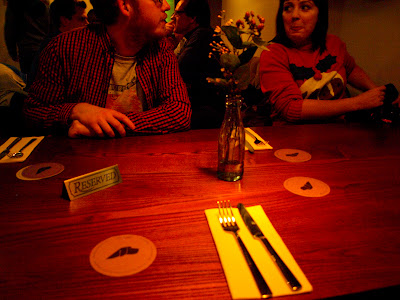 Posted by Jules at 8:04 PM
Email ThisBlogThis!Share to TwitterShare to FacebookShare to Pinterest