You will probably know, seeing as I bang on about it all the time, that I used to live in Peru. Bailey also spent several months out there visiting me and although I have to admit it is a funny old country, to say we were fond of the place would be an understatement. 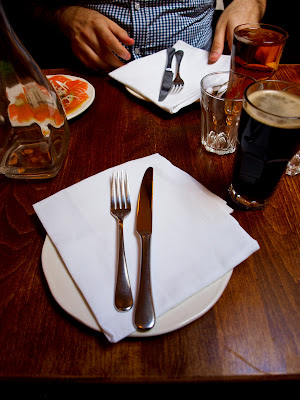 My absolute favourite thing about Peruvian people is their love of food. It was incredible to discover this nation of people who were so proud of their country's national dishes and who loved talking about food as much as I did. I found myself constantly listing the dishes I had tried to excited Peruvians who wanted to know exactly what I thought of them all. I'm really glad also that I learned to make most of my favourite Peruvian dishes while I was still out there.

However there a few key ingredients that I haven't gotten hold of over here, including Pisco (Peruvians' favourite drink), aji amarillo chillis (although I did get given a bottle of aji amarillo sauce by my aunt which was a fair substitute), yellow potatoes (to make the best ever Papa a la Huancaína), maíz morado (the weirdest thing ever - PURPLE sweetcorn! - used to make Mazamorra Morada pudding and Ribena-esque beverage Chicha Morada) and the crazy sweetcorn they have out there (the kernels are massive. And really fleshy / chewy. And much better than our sweetcorn). 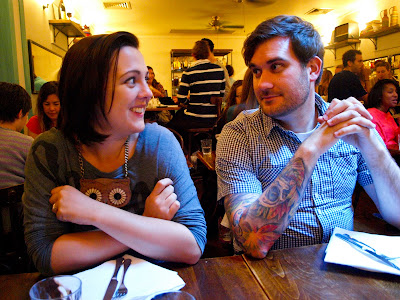 Well as you can imagine I was becoming pretty distressed to think that I might never eat some of these delights ever again (or sit next to a llama while looking out at the rolling hills of Machu Picchu but that's another story), when I started to hear all this fuss about Peruvian food being "all the rage" in 2012 in "that London". When we booked our weekend away to London with Jeni and Doyle, I excitedly started to look for a Peruvian restaurant for us to eat at.

I found Lima first which came very highly recommended and looked super lovely, but it wasn't floating my boat - "showcasing Peruvian flavours and ingredients in a clean and contemporary style" sounded OK, but what I was after was the good old proper Peruvian 5 Sol lunch menu food I ate while I was out there so I carried on searching. 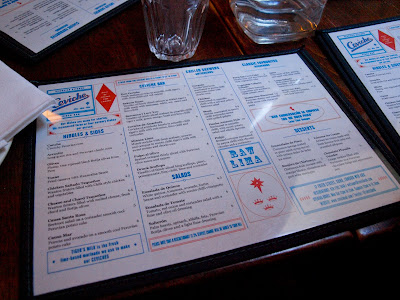 It was then that I found Ceviche which sounded absolutely perfect - all my favourite dishes but with a few quirky additions. Situated bang opposite Koya, Ceviche is in a great location and easy to find. We loved the place as soon as we arrived - the atmosphere was super relaxed and there were plenty of Peruvian band posters to look at while we waited (including one of Bareto- authors of the ditty 'Ya se ha muerto mi abuelo' which I heard played approximately 40 times per day during my stay in Peru). 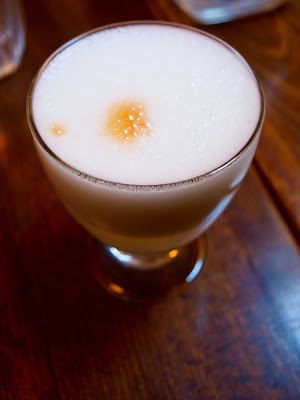 My first port of call was to get myself all over a Pisco Sour. Although I'm pretty sure I may be slightly allergic to this beverage (I used to get heartburn every Sunday morning after a night on these) I love it. Jeni went for the Passion Sour. Both cocktails were great although I think Jen was slightly put off when she realised that the lovely froth on top of her drink was basically egg white. Protein-tastic! I also treated myself to a refreshing glass of Chicha Morada. 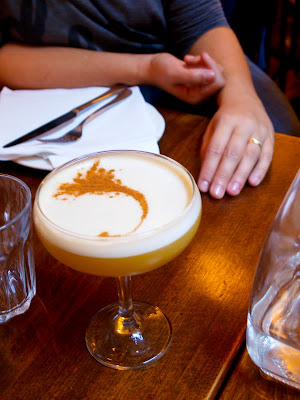 The boys both went for Peruvian favourite Cusqueña. Bailey spotted the 'Negra' variety on the menu and couldn't believe he hadn't spotted this while actually in Peru so wasted no time in ordering one, very nice it was too. 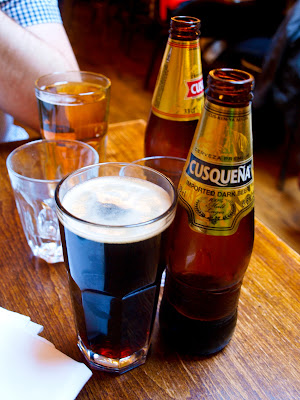 The food is a nice mix of small tapas-type plates and little bits and bobs to share which is quite nice as we got to try a good range of different things. Although their list of ceviche is amazing with allsorts on offer, I decided I wanted to keep it old school and go for the simple Don Ceviche, seeing as I hadn't had any ceviche since returning to England. This was great - just like a typical Peruvian ceviche with plenty of lime, onions and fresh sea bass. I also liked the addition of the crispy 'camote' (sweet potato) garnish on top which added another texture and gave the dish a bit of finesse. 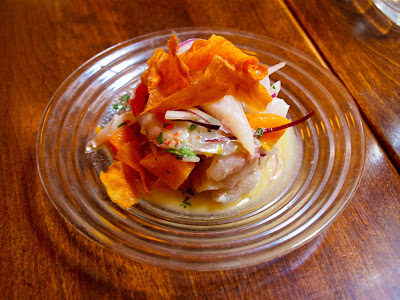 We also ordered a couple of other bits to share and ended up with a table full of food. Yucas, ordered mainly to get our chops round some Huancaína Sauce were really tasty. The Arrocito, which contained kernels of the amazing Peruvian sweetcorn was lovely and I wish I had ordered another wee dish of this - a bargain at 2 quid. The Cheese and Chard Tequeños were quite nice although I think these were my least favourite dish of the day - firstly I didn't think the sauce they came with packed much of a punch - we ended up just dipping them in the Huancaína, and secondly they weren't all that crispy. I wasn't too sure about the chard and olive addition either. Back in Lima we used to order these sensational Tequeños at our local weird pub which were stuffed with cheese and came with a bowl of puréed avocado, I think it was always going to be pretty tough to top those! 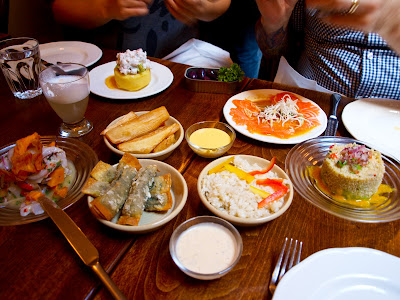 Bailey couldn't believe his luck when he spotted Huancaína Macaroni seeing as they had basically put two of his favourite dishes together. What a fantastic idea. He said it was beautiful and rich with no shortage of that peppery Huancaína flavour. 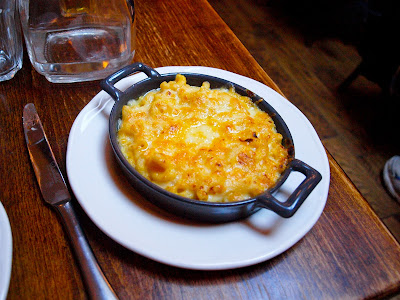 Jeni ordered a Causa Mar - made with the lovely Peruvian yellow potatoes - she said it was delicious and I was so impressed with how they had made Causa, which can be quite a gross looking dish, look beautiful. 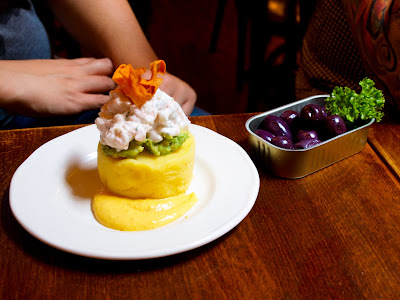 I believe Doyle was also pleased with his Sakura Maru which seemed to be a salmon Tiraditos with a bit of a Japanese twist. 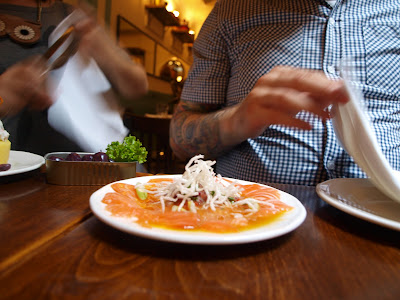 After the dizzying highs of the main course Jeni announced she was going to go for another cocktail and a dessert and I thought it would have been rude not to follow suit. Jeni ordered a Toro Mata, which was kind of like a Peruvian Espresso Martini and a Chocolate Physalis Volador for her dessert. I think this pud was basically a chocolate version of Peruvian Alfajores - very lovely but quite rich. 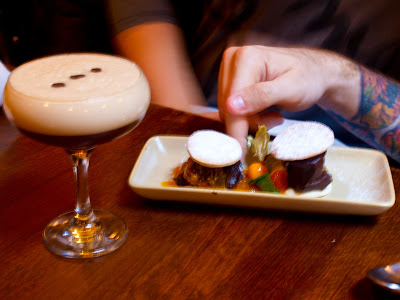 Even though I'd previously ordered a lovely Chicha Morada, I had to get my fix so went for a Chicha Sour. This was absolutely gorgeous. For my dessert I had a Suspiro de Chirimoya which was great - a lovely light dessert with a beautiful sticky meringue on top, it was actually better than any Suspiro de Limeña I'd had in Peru  and I savoured every mouthful. 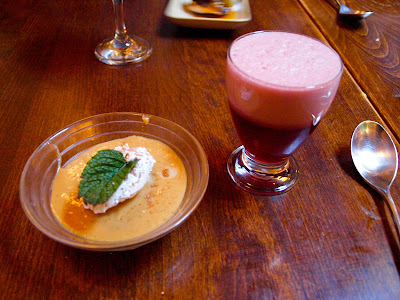 After all that great food I have to say the icing on the cake was nipping to the loo at the end of the meal and seeing little boxes of Peruvian trinkets on the loo walls such as postcards of Lima Centro and Inca Kola merchandise. This absolutely made my day! 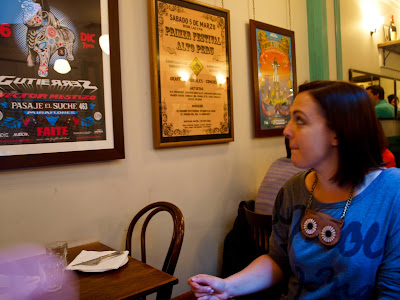 We left Ceviche feeling relaxed, full of good food (and booze) and happy. The staff were really nice to us (apart from that they wouldn't sell me any aji amarillos) and we thoroughly enjoyed our time there. Being in Ceviche really took me back to my time in Peru so I would really recommend it if you are after an authentic experience and want to taste some traditional dishes. The cocktails alone are worth making the trip for so if you're ever down in the Big Smoke and find yourself in Soho get yourself to Ceviche! 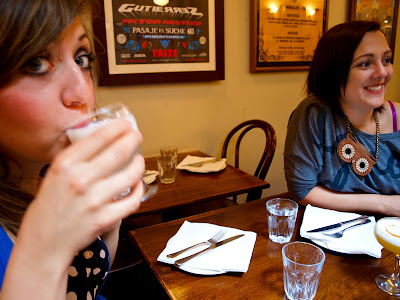 Posted by Jules at 8:51 AM
Email ThisBlogThis!Share to TwitterShare to FacebookShare to Pinterest