Christmas started early in our house this year as we decided to have a little Christmas Film party with our Manchester buddies on the first weekend in December. The plan was to get together, have a few beverages, watch a few Christmas movies and, most important of all, have a bit of Christmas tucker. 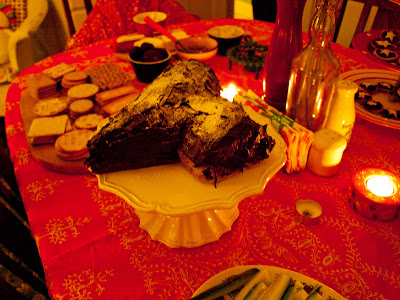 We did a few bits and bobs for a buffet which included Brie and Cranberry bites as well as Brussel Sprout and Caerphilly Muffins but this post is about the dessert. Christmas pudding is not loved by all and we already made a Christmas cake for our actual Christmas holidays so what is the third most popular Christmas dessert eh? 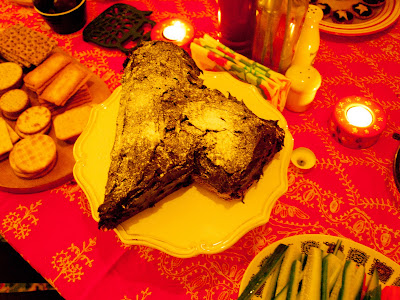 I used a recipe by Mary Cadogan from the BBC Food site, I can't say I've heard much about her before or used any of her recipes but this one looked neat and simple and with a little twist could be a bit more indulgent. First of all I made the sponge to be rolled later on. Mistake number one was not having a Swiss roll tin so I had to use a much smaller tin which was okay in the end but meant my sponge was way too fat to roll properly. 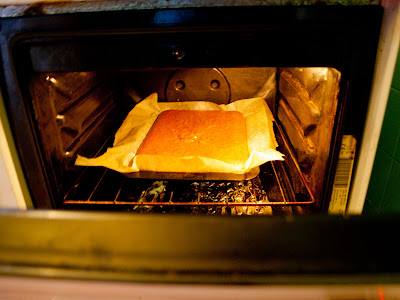 The sponge was dead easy to make and even before it went in the oven I knew it was going to be super light. Once you have baked the sponge it is a bit of a rigmaroll sugaring it and then rolling it up but even I managed it. I don't think this is a dessert you can rush though, you have to take your time and definitely allow it time to cool before you do anything with it.

On to the icing and filling which luckily is only one and a half processes as you split the mixture halfway through. Just looking at the ingredients I knew this was going to be tasty but just to add a little bit of an extra dimension to the log I decided that once I had split the misture and made the filling a bit thicker I would also add chocolate chunks and a good few shots of a pear liqueur. I think the pear liqueur really worked but I was not heavy handed enough with the chocolate chunks, next time more chunks! 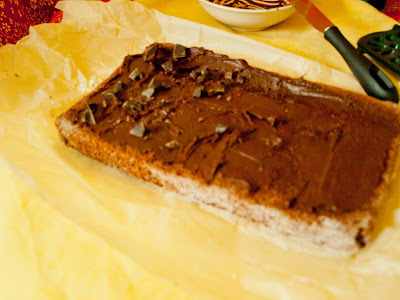 So once everything is cool and set you can put the different components together. Take your filling and stick it on to the sponge in nice generous portions. At this point you need to start rolling the sponge up and this is where mistake number one came to bite me in the bum. 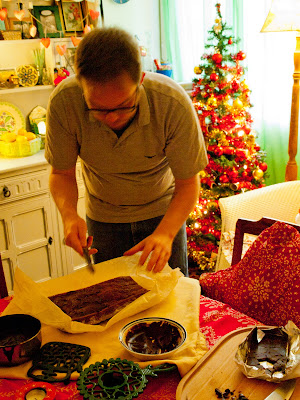 Because my sponge was so thick when I tried to roll it into a lovely multi layered log it just sort of folded into a sandwich and cracked in one or two places. Panic set in and I didn't know what to do. Realising there was absolutely nothing I could do at this point I soldiered on and started to add the icing to the cake, again I didn't think it was looking very good as the tears in the sponge were ripping even more when I applied icing to them. Somehow though as I added more and more icing it ended up looking more and more log-like. Once I did the diagonal slice and reposition you can see in the pics then added the final icing and a dusting of icing sugar I was really really happy with how it looked. 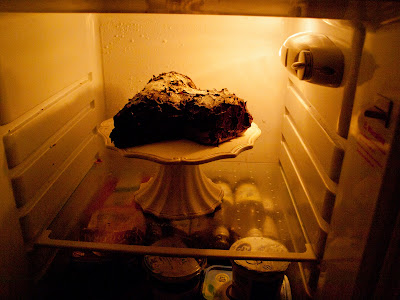 Everybody did seem to enjoy eating it too. I will definitely try this again and learn from my mistakes, next time invest in a swiss roll tin!

Preheat the oven to 190 degrees C. Butter and line a Swiss roll in with baking paper. 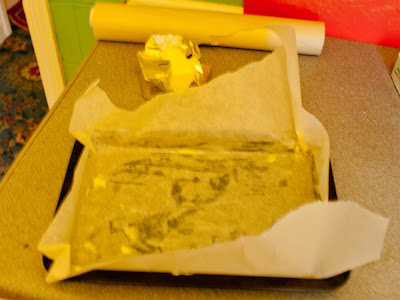 Separate the eggs into two large mixing bowls. Add the sugar and water to the bowl with the egg yolks and whisk until light and thick. 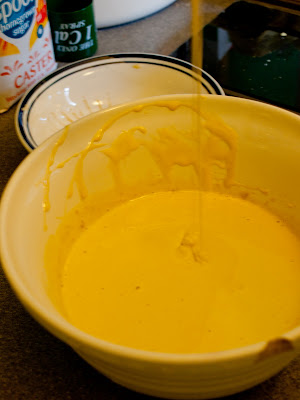 Sift in the flour and cocoa and lightly fold. 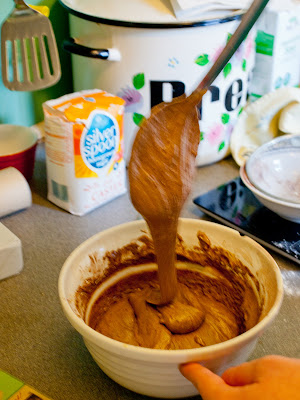 Beat the egg whites until they are stiff before folding them into the cake mixture. 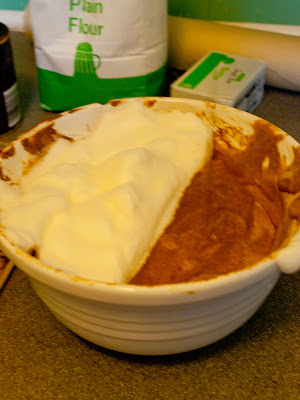 Pour the mixture into the prepared tin and spread to the edges. Bake for 10-12 minutes, or until firm. 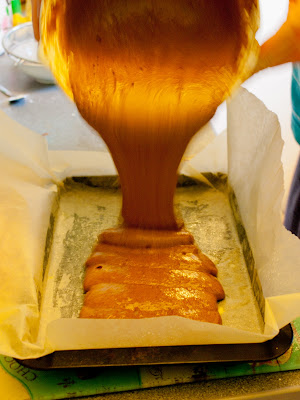 Turn the cake out onto a clean sheet of baking paper before leaving to cool. Roll the cake up using the paper to help you, rolling the paper inside the cake. 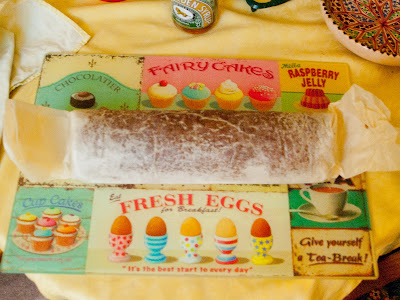 Pour the cream into a saucepan and heat. Bring to the boil, remove from the heat, then break in 400g of the chocolate. Stir until all the chocolate is melted. Take one half of this chocolate icing from the saucepan and place in a separate bowl and add another 100g of chocolate to this, as well as the pear liqueur. This will be the filling that goes in the inside of the log. What is left in the saucepan will be the icing for the outside of the log. Leave both to cool. 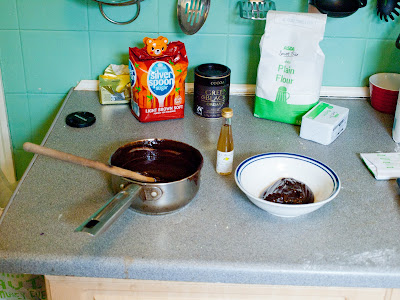 Unroll the cake and chop up the rest of the chocolate into chunks. Spread the filling all over the inside of the log and scatter with the chocolate chunks. Roll the log up again using the paper to help you. 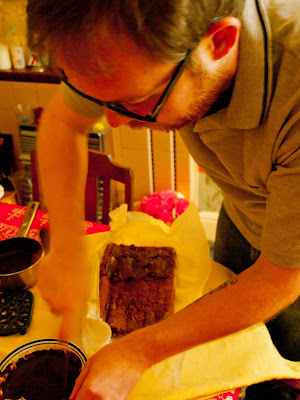 Cut a thick, diagonal slice off one end of the cake. Transfer the large piece of cake to a cake plate. Spread some icing onto the little bit of cake and stick it to the "log" giving the effect of a little "stump". Spread the rest of the icing all over the log, using a palette knife to give it the texture of a log! 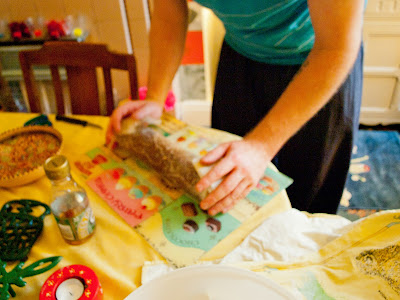 Posted by Bailey at 5:21 PM
Email ThisBlogThis!Share to TwitterShare to FacebookShare to Pinterest