Yesterday, Mark Garner, aka Gordo, asked me to write an objective summary of the perceived issues we have been aiming to highlight in recent weeks surrounding the advertising policy of Manchester Confidential. He promised that if I were to present an "honest, fair and not insulting" viewpoint, he would publish this on his website, and also respond. I decided against submitting this directly to Gordo for publishing, but hope that he will still respond to what I have to say.


Anyone who takes any interest in Manchester's food and drink scene can't possibly have failed to notice the current feeling of mistrust and general dissatisfaction of some people towards the city's food writers and bloggers. You may have seen us vocally supporting blogging in general as we do think a lot of the perceived problems are not as great as is often made out. However, that is not to say that we do not think there is any truth in some of the criticisms or that every individual is acting with integrity.

One topic I see discussed often is the perceived lack of integrity surrounding Manchester Confidential's use of advertising, and I have seen this discussed both on Twitter and in the website's own comments sections. There appears to be a perception that ManCon gives positive reviews to businesses who choose to advertise with them but criticise or ignore those who don't. I have recently seen examples of the clients themselves getting some of the stick as a result of the negative feeling this perception causes. In addition, there have even been suggestions that the company uses high-pressure sales techniques in order to encourage businesses to pay them for advertising. It is this perception that I wish to discuss, and not whether any of these rumours surrounding ManCon's practices are factually accurate or not, especially given that I have no concrete evidence either way.

One of the practices that may be leading people to hold this perception is the paid reviews (or "advertorials") that appear on the site. These advertorials do not include any labelling indicating the fact that the reviewee is a client of ManCon, although with a bit of digging around the rest of the site it would usually become apparent to the reader that these restaurants are clients of ManCon's due to the weight of advertising. However, at first glance they could easily be mistaken for an independent review as the only difference in presentation is a lack of the usual 'score' and comments section.

These advertorials first came to our attention last weekend, when we visited Kukoos for a quick bite to eat which had very recently been featured in the ManCon Food & Drink section (see here). The restaurant was disappointing, and later discussing our experience with other Kukoos visitors on Twitter, the overwhelming consensus was that many people had had very similar experiences. We went back to look at the Kukoos review and realised it was in fact a paid review/advertorial, as confirmed by the restaurant (see below). We felt that we (and potentially many others) had been misled. 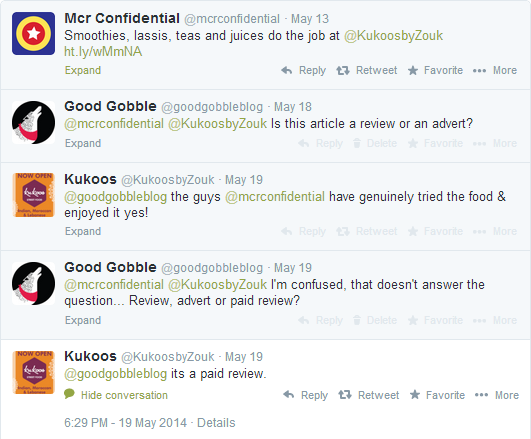 This is the core issue that we wished to discuss with Manchester Confidential: people feeling misled by these paid reviews could lead to a suspicion surrounding the rest of the site's content, hence the aforementioned perception of a lack of integrity.

Bailey did attempt to raise this issue with Gordo himself over Twitter. As per Gordo's request of presenting an "honest, fair and not insulting" point of view, I will not comment on this conversation and would prefer you to read the conversation here and draw your own conclusions (see here).

As a follow up, due to feeling generally dissatisfied with Gordo's answers, Bailey asked All Star Lanes to comment on another recent paid review (see here). We were not only interested in their answer, but were also keen to highlight to the restaurant that being reviewed in advertorials presented in this way can reflect badly on the business in question. 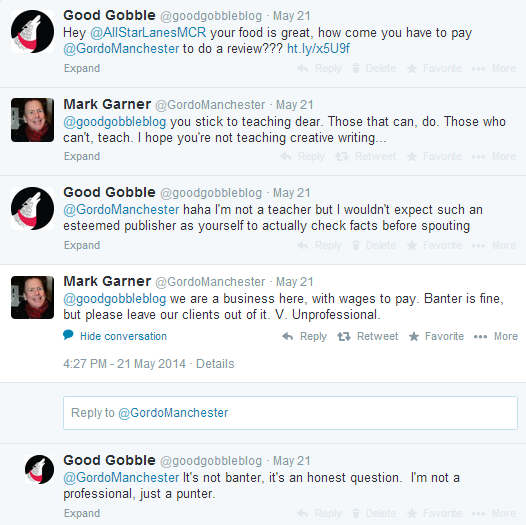 Skip forward a few days and we receive a visit from Gordo himself to our street food stall ¡Arepa! ¡Arepa! ¡Arepa!. For various reasons we have endeavoured to keep our business and blog separate but it isn't always possible and the majority of our customers are aware of our 'alter-ego'. I couldn't possibly transcribe the conversation we had with Gordo word-for-word, but the crux of it was that Gordo told us in no uncertain terms that if we should continue to interact with him and his clients, there would be negative repercussions involving him making it widely known that we were selling an "inferior product". Bailey asked for clarification as to whether or not he was threatening our business, to which he replied "Son, you mark my words: it's a promise".

This was quite a distressing exchange and with Gordo making it difficult to get a word in edgeways, Bailey did resort to telling Gordo to "F. off". This was regrettable and not behaviour that we would condone. At this point I stepped in to explain our concerns to Gordo - that we and many others feel that the way in which ManCon is run comes across as dishonest. Gordo challenged me to find any evidence of this dishonesty, and pledged to donate £1000 to a charity of my choosing should I manage to do so. For me, this would be an impossible task (how on earth could you prove how good or bad an experience a reviewer had on a single day?) but more importantly I feel Gordo is missing the point that some of ManCon's advertising policy and public conduct is toxic to the perception of all his site's content. He did accept my point of view however, and told me that if I presented my thoughts to him in writing, he would happily respond also in writing.

There's not really much else to say; as Gordo requested I have presented the facts, and to summarise: we asked a question regarding Manchester Confidential's advertorial policy and this resulted in quite an unpleasant threat being made to our business, although I'm sure Gordo could argue that there had been a threat made to his. So we await his response. I do have to say though, we don't intend to allow ourselves to be intimidated by Gordo's threats: should our business suffer any of the promised retaliations then we would be happy that this had been as a result of us standing by our strong belief that Manchester's food scene should be a fair, honest and independent level playing field.

EDIT 26/05/14: Since posting this article yesterday we've realised some of ManCon's clients could feel like we are criticising them by implication. We would like to clarify that we are not criticising them, in fact this post is not a criticism at all, it remains a simple recounting of facts. We would like to think that everybody understands that independent businesses need to advertise with major publishers like ManCon and they may not always have an option as to how those advertisements are presented.

EDIT 27/05/14:  ManCon have today updated their review guidance which can be found by clicking here. It is difficult to establish what they have updated on this 2012 post but it definitely now does include the line "we'll put from 27 May 2014: 'This article was produced in association with...'" when posting paid content. This can now be seen at the bottom of the aforementioned Kukoos advertorial.

As always with posts of this nature we'd appreciate it if you could leave a comment below with your thoughts as the inclusion of different outlooks really adds to the value of the post.

Posted by Jules at 9:42 AM
Email ThisBlogThis!Share to TwitterShare to FacebookShare to Pinterest